Milly (Toni Collette) is the woman who has everything: a successful career, a rock-star husband, and two beautiful children. Her best friend is Jess (Drew Barrymore), who works in a community garden, lives in a boathouse with her boyfriend Jago, and desperately wants a baby. Friends since childhood, Jess and Milly can't remember a time when they didn't share everything - secrets, clothes, even boyfriends. Their differences act as the glue binding them together. That is, until Milly is hit with the life-changing news that she has breast cancer, and needs Jess's support more than ever. As Jess tries to balance her own life, as well as be there for Milly, it's only a matter of time before the pressure on their bond takes its toll.

I hate it when a title is so on the nose that you don't even need to watch the movie to know what is going to happen. Sure, this happens a lot, at least, a dozen movies come out every year with titles that spoil the movie, but I don't think I've ever come across an example so egregious in this error as 'Miss You Already.' Directed by Catherine Hardwicke and starring Drew Barrymore and Toni Collette, the film's title undercuts the dramatic structure of the film sacrificing some genuinely wonderful performances to the point that actually watching the film for the sake of story becomes a redundancy.

Milly (Toni Collette) and Jess (Drew Barrymore) have been lifelong friends ever since Jess and her family immigrated to England from the United States. From first kisses to first dates to their first sexual encounters, the two girls grew into women who were inseparable - even when marriage and children would demand their attentions. Milly married Kit (Dominic Cooper) and instantly had two children while Jess married Jago (Paddy Considine) who together the pair have not been so lucky fertilely speaking. As Jess and Jago desperately try to have a child of their own without any sort of medical intervention, Milly lived her life as a loving mother and wife without any worries. When a routine checkup uncovers what turns out to be an aggressive form of breast cancer, Milly's life is turned upside down. Jess, Kit, and all of their friends and family are in Milly's corner, but with a dire prognosis and a ticking clock hanging over her, all Milly wants to do is feel alive again, and not be a being of pity for sorrowful eyes to look at. After all, she's not dead yet! As Milly sets out to rediscover a sense of youth and vitality, her marriage with Kit becomes strained and endangers her friendship with Jess.

On the cover art for this Blu-ray release of 'Miss You Already,' there is this quote from an unnamed Buzzfeed review "Beaches for 2015." While there are some story similarities between the two films, the 'Beaches' comparison isn't warranted, 'Miss You Already' is actually a watchable film with some genuinely fantastic performances. Unfortunately, 'Miss You Already' is a painfully rote and predictable affair. As the title implies, there really isn't anything too unexpected or unique about the story. From the first frame to the last, we know what is going to happen, it's just a matter of when it will happen and if  you're willing to give the movie the time to go the distance. 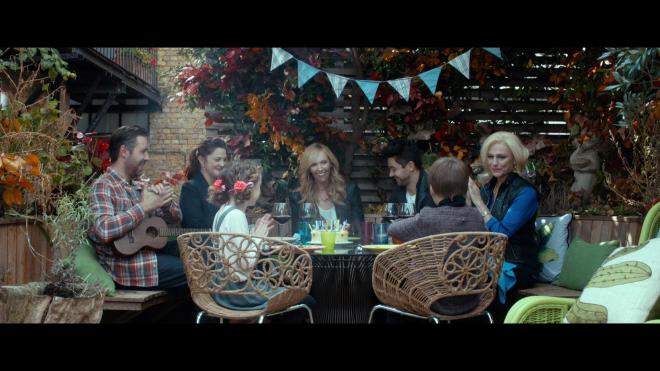 The true shame of the outcome of 'Miss You Already' are the performances, Toni Collette, and Drew Barrymore are fantastic together and the pair showed a genuine affection for one another that make you believe these two women could have grown up as best friends. Even the supporting roles of their respective husbands played by Dominic Cooper and Paddy Considine are perfectly wonderful and fill out the range of emotions that would naturally come up with a scenario such as this. Even when the film calls for some comedic levity in the form of Milly's actress mother Miranda played by Jacqueline Bisset, it doesn't play things for cheap laughs but instead finds the humor of the situation through a mother trying to put a positive light on her daughter's situation. But because Morwenna Bank's screenplay fails to hold anything back and runs through the plot points like an express train, 'Miss You Already' doesn't become a fulfilling dramatic experience.

While the film may not be perfect, that doesn't mean 'Miss You Already' should be avoided altogether. As I mentioned before, the principle actors Toni Collete and Drew Barrymore are wonderful, but it is the direction under Catherine Hardwicke that deserves a shoutout. Ever since 'Thirteen' and 'Lords of Dogtown' it's felt like Hardwicke has attached herself to one ill-fitting project after another so 'Miss You Already' is something that does feel like a return to form for her as a director. While Catherine Hardwicke was able to pull some fantastic performances out her cast, it still wasn't quite enough to pull the rest of the film up out of its hole of predictability. That's really the primary issue at play that will be a make it or break it point for anyone who sits down with this film. If you can get on board and see this one through to the end, I wouldn't say you'll be disappointed, but you may not enjoy the film as much as you possibly would have had the filmmakers used a little more restraint and ambiguity about where their movie was headed.

'Miss You Already' arrives on Blu-ray thanks to Lionsgate Films and is pressed onto a Region A Locked BD50 disc. Housed in an eco-friendly Blu-ray case with identical slipcover artwork, this single disc set comes with a Digital HD voucher. The disc opens with a series of upcoming and past Lionsgate releases before arriving at the main menu.

Shot digitally, 'Miss You Already' features a strong if somewhat average looking 2.40:1 1080p presentation. Details are crystal clear and easy to appreciate and showcase a number of the film's more interesting production design elements from Milly's clean and neat home to Jess's cluttered and cramped boathouse home allowing a sense of character to come through nicely. Colors tend to skew on the cooler side of things favoring blues and grays. As the film makes use of a lot of extreme closeups, middle ground objects and backgrounds tend to fade away into the distance. More than one scene in the film was shot using an iPhone camera (for obvious reasons in the film) and as a result there can be a bit of a sudden quality shift that isn't a fault of the transfer. Black levels are overall very strong with a deep inky presence that in spite of the use of a lot of closeup shots does manage to give most scenes a sense of depth and space to the image.

This Blu-ray of 'Miss You Already' comes packed with a very strong English DTS-HD MA 5.1 audio track that serves the conversational nature of the film perfectly. Because this is a conversation film, the surrounds are really only engaged in subtle ways as each scene requires. There really isn't much in the way of dynamic sound effects or action beats to keep them engaged beyond the need to give any particular scene a sense of space and atmosphere. As mentioned, this is a conversation film so Drew Barrymore's narration and the film's dialogue keeps things pretty well regulated to the front/center channels with little movement. Taken as a whole this is a perfectly effective audio mix but it's not exactly going to blow you away sonically speaking.

Audio Commentary: Director Catherine Hardwicke along with Jeff Toy and Jamie Holt provide a fine commentary for this film that covers a lot of the basic elements of bringing the movie together but also manages to pull in a lot of thematic and emotional insight.

Deleted Scenes: (HD 18:15) Available with optional commentary with Catherine Hardwicke, this is some pretty standard stuff that understandably didn't make it into the movie.

With Love: Making 'Miss You Already': (HD 14:31) A pretty standard EPK feature that does give some behind the scenes material but is pretty basic and not too enlightening.

While 'Miss You Already' holds few - if any - surprises in terms of story and plot, the film does showcase some fantastic performances from Drew Barrymore and Toni Colette. It may not be perfect but it's worth a watch and for those needing a good cry or two, this film should provide the emotional punch necessary. Lionsgate Home Entertainment has done a fine job bringing 'Miss You Already' to Blu-ray with a solid A/V presentation as well as some half-way decent extra features. It may not be a great movie, but I'm calling 'Miss You Already' as till being worth a look.

Sale Price 8.99
List Price 24.99
Buy Now
3rd Party 64.99
In Stock.
See what people are saying about this story or others
See Comments in Forum
Previous Next
Pre-Orders
Tomorrow's latest releases