A modern day adaptation of the ancient Greek play Lysistrata by Aristophanes, set against the backdrop of gang violence in Chicago.

In 'Chi-Raq' — a portmanteau of Chicago and Iraq, pronounced "cha-ee-RACK" — Spike Lee speaks directly to a topical issue afflicting and affecting the current geopolitical landscape of America. Right from the start, text on screen displays the amount of violence experienced throughout the country compared to the wars in Afghanistan and Iraq. The point is made perfectly clear: more money is spent on those countries — on rebuilding their infrastructure, education and government system — than on the American taxpayer, even though the death toll here outnumbers both those conflicts combined. Working from a script Lee co-wrote with film professor Kevin Willmott, the director wastes no time in expressing his intentions and of carrying no allusions, opening with the Nick Cannon song "Pray 4 My City," which, at times, sounds like a tearful plea, and brandishing the lyrics is bold, blood-red lettering across the screen. This is soon followed by a scene inside a nightclub where local rapper "Chi-raq" (Cannon) performs, but before finishing the first song, the crowd erupts in gunshots.

There is something daring and intrepid about Lee's bluntness in a plot about the rampant gang violence oppressing the neighborhoods of Chicago's south side which feels refreshing and exhilarating. He quickly establishes a sense of immediacy and urgency when Lysistrata (Teyonah Parris), our main protagonist in this tragic tale, enters the scene as a woman suddenly awakening to the hate and violence surrounding her everyday existence, of becoming aware to her own acceptance of it as normal and inescapable. Hours after the club shooting, her house is set afire by rival gang members, which then breaks out into a deafening shootout. The next morning, she witnesses a distraught mother (Jennifer Hudson) crying over her daughter's corpse on the street. As the doting and devoted girlfriend of "Chi-raq," Parris ('Mad Men,' 'Dear White People') is electric and arresting, gaining our sympathies in a matter of minutes by showing a secure, confident woman not yet aware of her true power but using that confidence to suppress her blindness to her city's pain. 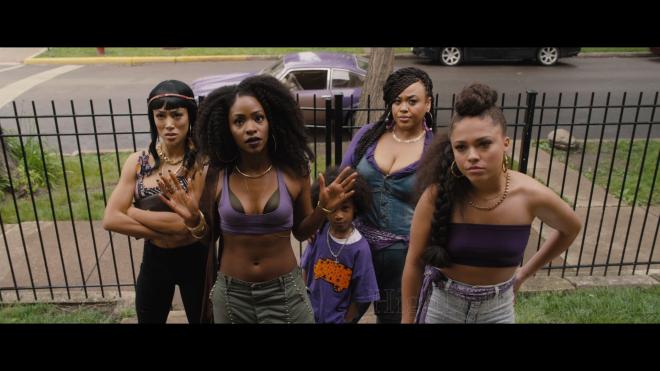 Though direct and to the point with its message, the film is not without the usual creative genius and underlying meaning expected of a Spike Lee joint. In fact, the director of now classics 'Do the Right Thing' and 'Malcolm X' and the much admired '25th Hour' and 'Inside Man' fuses the drama's poignancy with an absurdist edge and satirical wit that somehow encapsulates the seriousness of the subject matter with the irrationality of society's refusal to talk about it. The gravity and importance of this social issue lurking just beneath the silliness of the premise reminds of Lee's early works, 'She's Gotta Have It' and 'School Daze,' where he also tackled deeply concerning societal ills with biting humor. In this dramedy, women of all walks of life and age unite to end the senseless violence by denying men what they desire above power and pride: physical gratification. Inspired by the words of her generous neighbor Miss Helen (Angela Bassett), Lysistrata leads a peaceful revolution that eventually evolves into a battle of the sexes, as each side feels one needs the other more.

The most powerful and equally charming aspect of 'Chi-Raq' is Lee elevating the production to Shakespearean heights, instilling his characters with melodramatic personalities that never feel mawkish or cartoonish. Wesley Snipes's eye-patched gang leader affectionately called "Cyclops" and D. B. Sweeney's frantic mayor quickly come to mind. Lee and Willmott also bestow the entire cast with dialogue that's lyrical, an expressive vernacular heightening the everyday struggles to the level of rhythmic poetry. The story is actually a modern adaptation of Aristophanes' Classical Greek play Lysistrata, supplying the skeleton from which Lee builds a larger framework that addresses a topic some in the media have claimed is ignored by the African-American community: black-on-black violence. With Samuel L. Jackson serving as the film's chorus, occasionally interrupting and commenting on the action, Lee moves the story with a pulsating, musical energy that's captivating, touching on the fact that violence transcends race through John Cusack's caring Fr. Mike Corridan and affects all people around the world.

Lionsgate Home Entertainment brings 'Chi-Raq' to Blu-ray on a Region A locked, BD50 disc housed inside a blue, eco-cutout case with a colorful slipcover and a code for an UltraViolet Digital Copy. At startup, the disc commences with a series of skippable trailers before switching to the standard menu screen with full-motion clips and music playing in the background.

The latest Spike Lee joint debuts with a marvelous, reference quality 1080p/AVC MPEG-4 encode, showing lots of definition and clarity in every scene, including the many nighttime outdoor scenes where heavy, gloomy shadows engulf much of the landscape. Still, background information remains plainly discernible with the faintest lines of buildings and street corners unmistakable, even in the darkest portions of the frame.

Shooting with the Red Epic Dragon camera sytem, cinematographer Matthew Libatique ('Noah,' 'Straight Outta Compton') provides these dark sequences with a warm yellow-amber tone that feels cinematic while daylight sequences are more vivid and pop off the screen with brilliant, spot-on contrast and crisp, clean whites. Primaries are richly saturated and energetic, and secondary hues are full of warmth, giving the entire presentation an animated feel that complements the plot's ironic intentions. Black levels are equally luxurious with superb gradations between the various shades, which is most apparent in the many articles of clothing worn by the characters.

Presented in a 2.40:1 aspect ratio, the transfer is also razor sharp, exposing the tiniest detail and thread in Lysistrata's jean shorts, Dolmedes's colorful suits and hats, and in Fr. Mike Corridan's clerical and vestment garments. Individual bricks in the many impoverished, run-down looking buildings throughout Englewood are distinct, and the lettering on signs, whether hanging above buildings entrances or hand-made ones for protests, and the numerous posters plastered on walls are intelligible and plainly visible. Facial complexions appear natural and healthy while also showing outstanding lifelike textures that reveal every pore, wrinkle and negligible blemish, making this a beautiful high-def presentation of a powerful dramedy.

The choruses, prayers and the many poetic confabulations appeal to the heavens with an excellent, boisterously energetic DTS-HD Master Audio soundtrack that'll plunge viewers into the story's lyrical journey right from the start.

Featuring a wealth of song selections that will rock one's audio system, music continuously plays in the background, filling the entire soundscape with an expansive and broad sense of presence. Brimming with the commotion of city life and the endless tumult of street traffic, imaging delivers plenty of off-screen effects with clean fidelity and convincing directionality while dynamic range is sharply-detailed and room-penetrating with superb separation and distinction between the middle and higher frequencies. Dialogue is precise and well-prioritized, never overwhelmed by the loudest segments. Most impressive is a commanding and potently palpable low-end, rich with depth that fills the room with a mid and upper bass that's robust and highly responsive, providing each bullet and hip-hop tune with a serious wallop (bass chart).

Although the movie largely feels like a front-heavy presentation, the rears occasionally provide subtle atmospherics to expand the soundfield, but they are generally reserved for very explicit noises deliberately employed for dramatic effect, such as bullets whizzing in all directions. Some highlights are the sounds of guns loudly circling the listening area, fluidly and smoothly panning from the front to the right side, back, left side and returning to the front left. It's a terrific use of the entire soundscape that's both effective and engaging, adding to the plot's poignant message.

Direct and to the point with its message, Spike Lee speaks directly to a topical issue afflicting and affecting the current geopolitical landscape of America in the musical dramedy 'Chi-Raq.' Featuring outstanding performances from the entire cast, with Teyonah Parris as the noteworthy standout, the thoughtful film is refreshing and exhilarating, speeding along with a captivating rhythm and lyricism that's near Shakespearean in its scope. The Blu-ray arrives with a reference quality video and an excellently engaging audio presentation, but sadly, the bonus features are sorely lacking. Nonetheless, the overall package is recommended for Spike Lee fans and the curious.

Sale Price 14.99
List Price 19.99
Buy Now
3rd Party 14.35
In Stock.
See what people are saying about this story or others
See Comments in Forum
Previous Next
Pre-Orders
Tomorrow's latest releases