The Curse / Curse II: The Bite

'The Curse' - Life on the family dairy farm is difficult for young Zach Hayes (Wil Wheaton, Stand by Me): hard work, long hours and the normal family squabbles. But after an ice-blue meteor plunges through the midnight sky and lands on their property, it gets worse. Zach and the local doctor discover that something inside the meteor is infecting every living thing on the farm. Fruits, which look perfect on the outside are teeming with worms… and Zach’s family is beginning to change… hideously! This shocker is directed by actor David Keith (Firestarter, White of the Eye) and co-stars Claude Akins (Tentacles), Malcolm Danare (Christine), Cooper Huckabee (The Funhouse) and John Schneider (Smallville).

Taken from H.P. Lovecraft's "The Colour Out of Space," 'The Curse' is a delightfully amusing piece of horror shlock partially remembered for Lucio Fulci's involvement and the grisly special effects of rotting fruits and vegetables. At first thought, the idea of spoiled food wouldn't excite much interest in horror hounds looking for realistic gore and seeing either a masked killer or a supernatural presence wreaking havoc on unsuspecting victims. And in the second half of the 1980s, such was the popular expectation of most horror movies of the period. Yet, director David Keith, well-known actor of 'An Officer and a Gentleman' and 'Firestarter' making his directorial debut, pulls off the unexpected with reasonable effectiveness, centering the shocking gruesome details around food and drinking water when a large, yellow-glowing, pulsating meteorite crashes near a family farm, quickly contaminating the surrounding soil. Scenes of fruits and vegetables being cut and prepared for dinner, some oozing with a foul, liquid stench and others housing a horde of maggots, are the movie's best stomach-churning moments.

This is not to imply the filmmakers don't employ other ghastly visual goodies for audiences. Since one must consume the food and drink water daily, that same contaminant is devoured by the family and appears to have similar decomposing effect on humans. But before rotting them from the inside, humans slowly evolve into hideous demonic beasts of rage, which the filmmakers cleverly use as a metaphor for a troubled, gradually dying family that features a dramatic but also somewhat wasted performance by Wil Wheaton. After the death of his father, Wheaton's Zack and his sister move into the home of a cruelly stern and harshly religious farmer (Claude Atkins). When Zack's mother is infected, the kids' stepdad sees it as a sign and punishment from a higher power, which ultimately means denial of the real problem. It's quirky and the story, at times, feels a bit clunky with a couple plot details going unexplained, such as 'The Dukes of Hazzard' star John Schneider's character, but once the fruity gore starts splattering across the screen, the pace picks up, connecting the family cruelty and endless sinning into a diverting whole. (Movie Rating: 3.5/5) 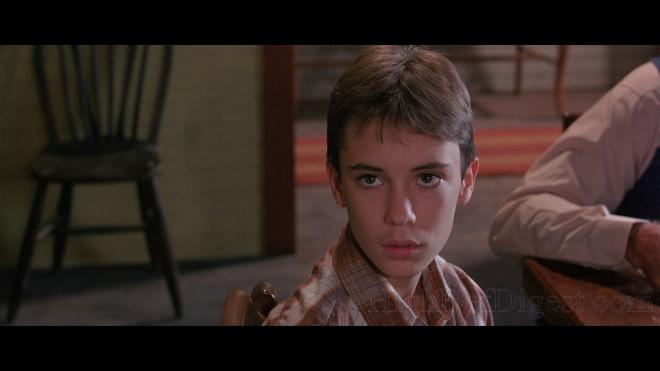 In spite of its title, 'Curse II' is not a direct follow-up to Keith's 1987 shlocky cult favorite, which featured elements of science-fiction, religious fanaticism and an amusing performance from a young Wil Wheaton. There is literally no connection between the two vastly different movies: one set on a rural farm while the other taking place on a desert highway. The first movie centers around a family battling a microscopic alien organism that dissolves its victims from the inside, but the completely unrelated sequel is basically a road movie, following a young couple (Jill Schoelen and J. Eddie Peck) driving cross country while the boyfriend suffers from a snakebite — hence, the movie being subtitled 'The Bite,' which is also its original title before the studio made the vague link. However, if someone would have to strain for an association between the two, it might be the two ambiguously touching on the similar theme of environmental contamination, making both fall under the "natural horror" subgenre. Further still, the more explicit tie-in would surely have to be the desecration and degeneration of the body, making them "body horror" flicks.

In fact, I would imagine that last part is the more likely culprit behind the producers' reasoning for relating the two movies. Here, after Peck's Clark is bitten by a radioactive snake, his left hand slowly transforms into a slimy, driveling head of a snake, which also inexplicably affects his personality and mental state. The once polite, loving and high-spirited man was suddenly turning aggressive, churlish and bad-tempered while his new snake-hand pet killed anyone sneaking a peek beneath the bandages meant to hide the creature. Anyone from a concerned medical doctor to a curious little girl is a potential victim for this deadly monster that's the result of a bite, which begs the question if the same changes would still occur if Clark was perhaps bitten on a different, ahem, body part. This would surely be a wholly different movie — one that would better suit and justify some of the production's unintentional humor, much of which derives from the awesomely silly and bloody gory special effects. It would also validate the reason for seeing Jamie Farr as an overtly friendly traveling salesman with a suitcase full of snake antivenom. (Movie Rating: 3/5) 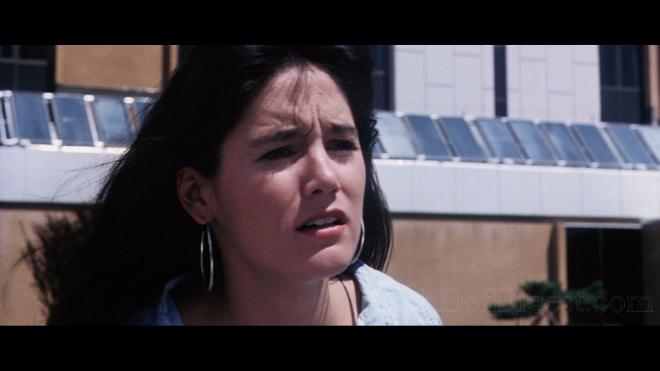 Shout! Factory brings 'The Curse / Curse II: The Bite' to Blu-ray as a double-feature single-disc release under the distributor's Scream Factory line. The Region A locked, BD50 disc containing both films is housed inside a regular blue case. At startup, the disc goes to an animated screen with music where viewers can choose between the two movies.

The color of outer space crash lands on Blu-ray with a shockingly good 1080p/AVC MPEG-4 encode that makes the fruity gore come to life. The source used for this high-def video appears to be in excellent condition, displaying brilliant, pitch-perfect contrast levels. Clarity and resolution are quite superb for a movie of this age and low-budget origins, showing a great deal of definition into the far distance. The leaves of trees, blades of grass and pebbles of dirt are highly detailed while the stitching on clothing, the grain on the wood and furniture, and individual hairs are distinct and plainly visible. Facial complexions appear natural and revealing with healthy flesh tones while overall colors are accurate and full-bodied with primaries looking particularly vibrant and richly saturated. Blacks tend to come off a tad strong, almost to the point of crush, but for the most part, shadows look good. The 2.35:1 image is awash with a fine layer of grain throughout, giving the transfer a nice and welcomed film-like appeal. (Video Rating: 4/5)

At the start, the movie opens with a text explaining this AVC-encoded transfer was made from the only surviving elements found in the MGM vault, and it's easy to see why the producers felt the need to include this caveat. Although the source doesn't appear to be in too bad a shape, except for the flash of cigarette burns in the top right corner a couple times, the picture quality is nonetheless below average and definitely shows its age. The 2.35:1 image is noticeably faded and somewhat washed out during daylight sequences, making faces seem pale and sickly while also lacking appreciable definition. Whites are pretty bright and surprisingly clean, but overall contrast tends to run on the hot side. Black levels also come off much too strong, ruining the finer details and making shadows look like swarthy blobs, especially during the many nighttime scenes. Not surprising, the color palette is lackluster and often dull, with a couple moments where looking practically bleached out. Clarity and resolution are fairly poor and hardly any better than standard definition, and the presentation also suffers from a couple instances of telecine judder, making it pretty disappointing overall. (Video Rating: 2/5)

David Keith's directorial debuts also arrives with an equally pleasing and surprisingly good DTS-HD Master Audio stereo soundtrack. Imaging is terrifically expansive and highly engaging, brimming with lots of background activity and excellent channel separation. Convincing off-screen effects pan across the screen flawlessly with appreciable fidelity and clarity while vocals are precise and well-prioritized in the center with very good intonation. The mid-range reveals a couple worrying parts of minor distortion, namely the meteor crash scene, but overall, the design is clean with distinct separation between the various frequencies. Franco Micalizzi's score benefits the most from the jump to high-resolution audio, particularly when applying the receiver's audio upmixer function, providing the entire production and action with a broad and welcoming appeal. Most impressive is a shockingly responsive low-end that gives the music an attractive throaty presence. (Audio Rating: 4/5)

Although the video is a disappointment, the DTS-HD Master Audio stereo soundtrack provides a much better show for fans to enjoy. The soundstage is decently broad and welcoming with plenty of activity in the background, providing the presentation with a good sense of presence and keeping viewers engaged. The birds riding in the back of the jeep are continuously chirping, a nurse's voice making announcements at a hospital echo throughout, and the rainfall during a thunderstorm incessantly fills the screen. The lossless track lends itself nicely to the receiver's audio upmixer function, moving many of those same effects into the front heights, satisfyingly expanding the soundfield. Discrete movement across the channels is fluid and convincing, and the mid-range is fairly dynamic with lots of appreciable clarity and distinction, though it never really pushes much into the higher frequencies. Low bass is, honestly, nothing to write home about, but it's adequate for a movie of this vintage and surprisingly punchy in couple moments, especially in the musical score. Vocals fluctuate in several areas and sequences, distinct and clear one instant and at a lower volume than the rest of the mix the next. (Audio Rating: 3.5/5)

'The Curse' is a 1987 shlocky cult favorite by actor-turned-director David Keith and starring Wil Wheaton that centers around a family battling a microscopic alien organism that dissolves its victims from the inside. The completely unrelated sequel, subtitled 'The Bite,' is basically a road movie, following a young couple (Jill Schoelen and J. Eddie Peck) driving cross country while the boyfriend is slowly transformed by a bite from a radioactive snake. Both pieces of wildly amusing shlock arrive with excellent audio but the video presentations couldn't be any more different, with the sequel looking disappointingly poor. Also, the lack of bonus material will have fans thinking twice on a purchase, yet for cult enthusiasts and collectors, the double-feature package is worth the admission price.

Sale Price 89.99
Buy Now
3rd Party 69.47
In Stock.
See what people are saying about this story or others
See Comments in Forum
Previous Next
Pre-Orders
Tomorrow's latest releases