Imagine being a hunter leading highly trained bloodhounds in pursuit of a killer...and the trail leads directly to you! Starring Academy-Award winners Kevin Costner and Gene Hackman, No Way Out is "a mesmerizing look at Washington power" (The Hollywood Reporter. Capturing a well-deserved four stars from critic Roger Ebert, this "taut [and] stylish" (Newsweek) thriller is fast-paced and powerful - "a perfect nailbiter" (Variety)!

In a fit of rage, Secretary of Defense David Brice (Hackman) murders his mistress. To keep a lid on the scandal, Brice's loyal aide (Will Patton), creates the perfect cover-up: he "invents" a more enticing killer - a Russian spy - and then enlists naval commander Tom Farrell (Costner) to find him. But as a chilling twist of fate would have it, Farrell also has a strong commection to the victim...and now all the clues he's been hired to uncover are leading straight to him! In a desperate race against time, Farrell's search for the killer is not only a matter of national security, but also a matter of saving his own hide.

Sexy thrillers were a dime a dozen in the 1980s, but 'No Way Out' stood out from the pack. Ask anyone who saw the film at the time of its release what they remember most about it today, and the answer likely would be the steamy encounter between Kevin Costner and Sean Young in the back seat of a stretch limousine...and the out-of-left-field, totally unnecessary twist ending that left many a viewer with a sour taste in their mouth. Up until its final minutes, Roger Donaldson's breathless mystery remains taut, titillating, engrossing, and filled with fine performances, but in the blink of an eye, the denouement sucks the wind out of the movie's sails.

The good news is, unlike the duplicitous, deceitful characters that populate the drama, 'No Way Out' plays fair. The twist may be distasteful, but it's logical, airtight, and even predictable if you pay close enough attention. (A couple of noteworthy clues are sprinkled throughout the narrative.) But there's enough else going on in Robert Garland's screenplay - illicit romance, political skullduggery, twisted liaisons, and frantic chases - to fully satiate audiences. We don't need a last-second jolt. Though the eleventh hour revelation is clever and a bit shocking, it changes the tone of everything we've witnessed before it. The twist in 'The Sixth Sense' was an exhilarating bombshell; the one in 'No Way Out'...not so much.

With Cold War Washington as its backdrop, 'No Way Out' chronicles the rise of Tom Farrell (Costner), a lieutenant commander in the U.S. Navy who comes to work in the Pentagon for Secretary of Defense David Brice (Gene Hackman) and his unctuous general counsel, Scott Pritchard (Will Patton). Brice tasks Farrell with interfacing with the C.I.A. to see if the Soviets are secretly producing a phantom submarine that's invisible to sonar. At a posh D.C. reception, Tom meets the alluring Susan Atwell (Sean Young), and the two begin a torrid affair. Soon, however, Susan divulges she is also Brice's mistress, and when Brice discovers she's two-timing him, he accidentally kills her during a heated argument.

Brice intends to confess to the police, but Pritchard urges him to stay quiet, believing they can pin the killing on a Soviet agent who may or may not exist. Brice goes along with the plan, but when a damaged Polaroid negative is discovered in Susan's condo, Tom knows his face will turn up on the print if the image can be recovered and Pritchard will frame him for the killing. A race against time ensues, as Tom - who ironically is also put in charge of rooting out the Soviet spy - tries to stall the investigation, protect those who know about Susan's relationship with Brice, and find some shred of evidence that will link Brice to Susan's death.

Released just a couple of months after 'The Untouchables,' 'No Way Out' helped catapult Costner to the top of Hollywood's A list. His clean-cut yet rugged good looks coupled with a confident, tough-yet-tender demeanor made him attractive to both men and women, and let's face it, no one except maybe Richard Gere in 'An Officer and a Gentleman' looked better in Navy whites. Yet sadly, Costner's good-guy sincerity ultimately sabotages the film. (Revealing anything more would spoil the movie for anyone who hasn't yet seen it.) His sizzling chemistry with Young, however, instantly ignites the plot, and her sassy performance makes a significant impression. Big things awaited Young following this film (among them, the role of Catwoman in 'Batman Returns'), but it's a shame bad luck and bizarre behavior altered the trajectory of her burgeoning career.

As always, Hackman is reliable, dependable, and utterly believable as the Secretary of Defense, but it's Will Patton as his all-too-devoted general counsel who steals the show with a colorful, complex portrayal. Howard Duff, George Dzundza, and Fred Thompson (in just his second film) also assert themselves well in small but key parts.

Donaldson is a talented director and he crafts a slick, captivating thriller that's well paced and often keeps us on the edge of our seats. Almost 30 years later, the film still holds up well, despite a couple of telltale '80s affectations. And yet the screenplay can't leave well enough alone, going a step further than it needs to and straining credulity. Yes, the ending of 'No Way Out' is clever, but maybe too clever for it's own good. 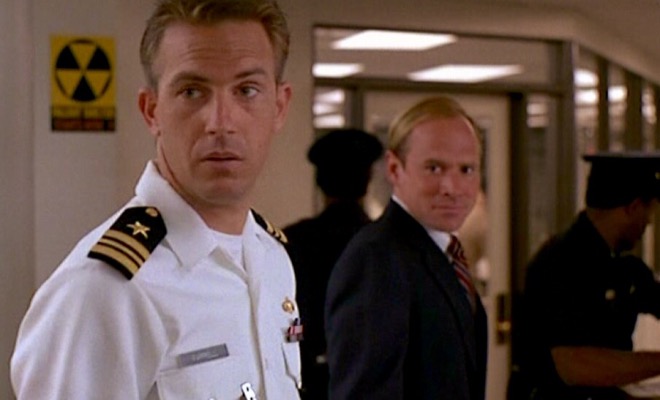 'No Way Out' arrives on Blu-ray packaged in a standard case. Video codec is 1080p/AVC MPEG-4 and default audio is DTS-HD Master Audio 5.1. Once the disc is inserted into the player, the static menu with music immediately pops up; no previews or promos precede it.

The source material for the 1080p/AVC MPEG-4 transfer has not been remastered, but image quality is generally good. Nicks and marks pop up with a fair amount of frequency, but don't distract too much from the on-screen action. Grain levels fluctuate, as does clarity, but solid contrast invigorates the picture, lending it an infectious vibrancy that often masks its flaws. Colors, especially reds, are bold and lush, and though exteriors look a bit faded by comparison, the land and cityscapes exude a pleasing sense of depth. Blacks are deep, whites are crisp, and flesh tones appear natural, and no crush or noise creeps into the image. Sharp close-ups highlight Costner's ruggedness and Young's allure, and background elements are easy to discern. Maybe someday 'No Way Out' will receive the makeover it deserves, but this transfer still bests previous home video versions, and fans shouldn't hesitate to upgrade.

Though surround activity is limited, the DTS-HD Master Audio 5.1 track supplies clear, well-modulated sound. Music, effects, and dialogue are nicely balanced and properly prioritized, thrusting us into the story's tense atmosphere. A wide dynamic scale keeps distortion at bay and handles all the highs and lows of both Maurice Jarre's active score and the synthesizer-laced 1980s pop tunes. Front channel stereo separation adds scope and depth to the soundscape, and all the conversations are easy to comprehend. Best of all, no age-related hiss, pops, or crackles muck up the mix. For a 30-year-old film, 'No Way Out' sounds quite good.

Just a couple of supplements are included on this catalogue release.

One of the most popular 1980s thrillers finally comes to Blu-ray, and despite a disappointing ending, 'No Way Out' remains a tense, sexy, and very slick study of political intrigue. The story of a top naval officer who fears he may be framed for his girlfriend's murder and frantically seeks to expose the real killer features strong performances from Kevin Costner, Gene Hackman, and Sean Young and taut direction by Roger Donaldson, but an unnecessary twist sucks the air out of the tale during its denouement. Shout Factory skimps a bit on supplements, but the video and audio transfers are a definite improvement over the previous DVD and heighten the film's distinct '80s vibe. 'No Way Out' often polarizes viewers, but it's a well-made, engrossing movie that coasts on style and the attractiveness of its stars, and is certainly worth another look.