Newly re-mastered in HD! The third of seven films screen legends Burt Lancaster (Run Silent, Run Deep) and Kirk Douglas (Cast a Giant Shadow) have appeared together in is a satirical take on the American Revolution by George Bernard Shaw (My Fair Lady), boasting a cutting performance from acting great Laurence Olivier (Rebecca). When Dick Dudgeon (Douglas) learns his father was executed by the British for treason at the onset of the Revolutionary War, he steals the body for a proper burial, ignoring the pleas of his friend, Minister Anthony Anderson (Lancaster) who s a peace-loving person who ends up becoming a belligerent firebrand of a rebel trying to save Dudgeon s life. Adapted for the screen by John Dighton (Roman Holiday) and Richard Kibbee (Vera Cruz) and featuring strong direction by James Bond veteran Guy Hamilton (Goldfinger).

"Bury him quickly, father. Before the memory of his death makes you forget you're a man of peace."

Every once in a while, you get a movie where the actors involved are reason enough to see the production. Story? It doesn't matter, you're there to see these incredible performers work together and create some silver screen magic if the story pays off and the film is a compelling watch that's just icing on the cake. 1959's 'The Devil's Disciple' directed by Guy Hamilton based on the George Bernard Shaw play stars silver screen icons Burt Lancaster, Kirk Douglas and Laurence Olivier in a Revolutionary War frontier drama that lives up to the potential this great cast has to offer.

As the Revolutionary War raged throughout the American Colonies, England was put in a position of maintaining law and order and ensuring that any rebellion in the frontier towns was quickly quashed before it turned into another battlefront. Tasked with this job is General Burgoyne (Laurence Olivier). As a stern man of law and order, Burgoyne stands by military might and isn't above hanging a man who may be innocent of supposed rebellious crimes if it means sending a message to anyone who may dare to rise up against the crown. When the local Reverend Anthony Anderson (Burt Lancaster) hears that one of his flock is about to be wrongly executed, he hurries as fast as he can to prevent the horrendous fate but arrives mere moments too late. To add insult to the indignity of an innocent man being hung, Reverend Anderson learns that he can't take the body back to the man's family for a proper burial. The body is to serve as a message.

While the corpse is left to hang, the man's son, the rebellious Richard Dudgeon (Kirk Douglas) cuts the noose in the dead of night and outrides the pursuing English officers to return his father to the family's plot. After Reverend Anderson and Richard spar over the ethics of what has just transpired, the elder Dudgeon is laid to rest and the incident is forgotten. The only problem is the English didn't forget Anderson's protests about leaving the body on display and are quick to deduce that he is the likely culprit of the theft. When Anderson is called away to care for the elder Dudgeon's widow, that leaves his beautiful young wife Judith (Janette Scott) in the care of Richard. Just when their attitudes towards each other begin to cool off and the pair starts to see a possible attraction, English army officers charge into the Anderson home looking for Anthony.

Richard does the honorable thing by claiming he is Anthony, freeing his friend from the noose, but as a result the real Anthony is forced to flee into the frontier. As Richard is facing a kangaroo court, Anthony witnesses the atrocities of war first-hand. It isn't long before Anthony comes out from behind the pulpit and picks up a musket and starts leading a band of rebels. When Anthony learns that Richard is going to hang in his place, Anthony will have to face General Burgoyne himself in order to ensure that true justice is served. 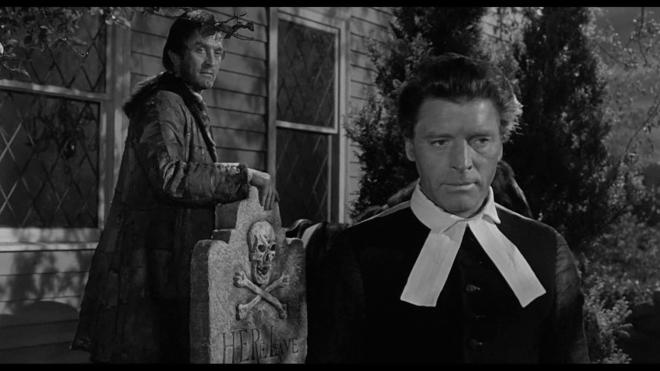 Those going into 'The Devil's Disciple' expecting the rousing frontier action of something like 'Drums Along the Mohawk' may come away from this film a fair bit disappointed. This is a movie that is more focused on the intricacies and ethics of war, being a soldier, and the responsibilities of being a civilian than it is about showing the action. To that respect, the film works beautifully. By maintaining the essence of the play, the story feels small and intimate while still holding onto a sense of the larger canvas behind it. For this movie to work, it didn't need to have big-budget epic battle sequences, it just needed to deliver on the performances from its principal players and in that regard this movie is something of a gem.

As the third of seven outings together, Burt Lancaster and Kirk Douglas are great on screen together in 'The Devil's Disciple.' These guys know how to play their parts as polar opposites and let that dynamic be the source of the drama. By establishing their characters in terms of archetypes, it makes it all the more important when outside forces require their personality shifts. Where Anderson was a man of peace and Roger the man of action, the two switch places in a convincing way that doesn't feel forced or convenient but in the sort of way that a meeting of minds would produce. All of a sudden the two can see where each other was coming from all along and find it easier to take over their respective stances on an important issue. At the heart of this switch is Laurence Olivier as the taciturn General Burgoyne. He's a man of rule and order, but even he knows that his way of doing things is coming to an end. But knowing the outcome isn't going to prevent him from doing his duty. Olivier is fantastic in the part, I just wish he and Lancaster and Douglas had been able to share more screen time together. The moments they do share, even as brief as they are, are absolutely worth the price of admission.

If you've never seen or heard of 'The Devil's Disciple' before, you're in for a real treat with this great movie. It's great fun without being an action-heavy bore. It's a solid piece of drama without ever being too talky or too preachy with its brand of politics. Where I appreciated this movie is that it take a satirical look at political discourse without ever saying one side is right or the other side is wrong. Best of all you get to see three of the greatest actors to commit their respective images to celluloid on screen together. When you take stock of this film's many attributes, it's hard not to come away from 'The Devil's Disciple' satisfied with what you've just witnessed.

'The Devil's Disciple' arrives on Blu-ray thanks to Kino Lorber and their Studio Classics line and is pressed on a Region A locked BD25 disc. Housed in a standard case, the disc opens directly to a static image main menu with the film's score playing in the background.

'The Devil's Disciple' makes a pleasing debut on Blu-ray with a beautiful black and white 1.66:1 1080p transfer. The print is in pretty fantastic shape with only some mild speckling here and there, but otherwise this print is virtually flawless. Fine film grain has been retained throughout offering up some beautiful detail effects allowing you to appreciate the actor's facial features, the film's impressive costuming, as well as the scenery and production design work. Black levels are rich and inky and the film's greyscale and shadows work to create an image with a strong three-dimensional sense of depth to it. The only real problem of note for this transfer is some noticeable image jitter during the first act. Thankfully this effect seems to work itself out and dissipate around the time the second act kicks into gear and is stable from then on. Overall this is a pretty fantastic transfer and for a movie going on 56 years of age, it's hard to complain about any small shortcomings.

'The Devil's Disciple' arrives with a strong and resonant DTS-HD MA 2.0 audio track. Since this is a largely dialog driven film, the actors voices stay front and center in this track and come through with crystal clarity. The dialog, sound effects and the score by Richard Rodney Bennett have plenty of space and atmosphere to occupy and never trip over themselves or create any kind of distortion effects. The track keeps to the midranges and is well balanced without any need to monitor volume shifts in any way. Since the film is so dialog-driven, imaging isn't as much of an important element except for a few moments when we see some fighting or when there is a drumroll for a hanging. All around this is a clean track without any age-related issues the likes of hiss or pop to report.

The Devil's Disciple Trailer: (HD 2:56) A strong trailer, but maybe plays up the frontier action angle too much.

The Train Trailer: (HD 4:36) A great trailer for a fantastic movie, it's a bit of a long trailer though and maybe gives away too much of the movie.

Cast A Giant Shadow Trailer:  (HD 3:41) A solid trailer that has me interested to pick this one up at some point.

The Scalphunters Trailer: (HD 4:14) Not one of my favorite Lancaster westerns, but it's still a pretty decent flick and this trailer does it justice.

Run Silent, Run Deep Trailer: (HD 3:02) One of my favorite movies and this trailer does a solid job of selling the flick. It's a great watch if you haven't caught it yet. Well worth the time you put into it.

When you've got names like Lancaster, Douglas, and Olivier headlining a movie, it's tough not to get your hopes up a little. Thankfully, 'The Devil's Disciple' delivers the goods as a frontier film set against the American Revolution with a smart satirical examination of political discourse. Kino Lorber has done a fine job bringing this film to Blu-ray with a strong A/V presentation. Extra features are only a collection of trailers, but the film alone is worth it making this Blu-ray disc an easy one to recommend to people interested in discovering a classic.

Sale Price 19.89
List Price 29.95
Buy Now
3rd Party 10.94
In Stock.
See what people are saying about this story or others
See Comments in Forum
Previous Next
Pre-Orders
Tomorrow's latest releases