Returning from vacation, the Miller family find their home has been broken into. After cleaning up the mess they continue with their lives, shaking off the feeling of being violated. Little do they know the real nightmare has just begun.

There's something inherently voyeuristic about the found footage genre of filmmaking. Comedies, Science Fiction movies, Horror flicks - all of them have made the style stick in one way or another. It's a way to give the audience a singular point of view of the events of the film. Sometimes the results work, sometimes they crumble. Adam Mason's 'Hangman' is a movie that takes cues from the found footage sub-genre while presenting the material in real time. We watch as a deranged madman breaks into the home of a picturesque family, stalks them, records them during their day-to-day lives, and then sets about killing them one by one.

The Millers lead a good life. Aaron (Jeremy Sisto) and his wife Beth (Kate Ashfield) have a wonderful home that they share with their two kids Marley (Ryan Simpkins) and Max (Ty Simpkins). They just got back from a nice long vacation and are relaxed and ready to get back to their daily routine. Little did they know that a silent Masked Man (Eric Michael Cole) had broken into their home while they were away. Instead of ransacking the place for their various electronics and valuables, this creep slept in their beds, searched through their belongings, watched their home movies, and then set about installing hidden cameras throughout the house and installing himself in the attic.

As the family comes home and are thankful that nothing was stolen, they're obviously very shaken and work to put the incident behind them. But strange things keep happening. Personal effects go missing and turn up at inopportune moments. Slowly the Miller family is turned against itself, all the while the crazed silent Masked Man lurks in the darkness pulling the strings like a demented puppet master. He does this until the family is at their absolute worst and then chooses the best moments to strike at them directly.

What makes a movie like 'Hangman' work is the simple fact that there just doesn't appear to be any sort of motive to the madman's motives. He's doing it all simply because he can and has the means to. There's something creepy and a bit terrifying about the idea that you could be subject to the whims of a lunatic standing in your closet. Also lending itself to 'Hangman' is the visual style. By using the found footage formula, it never feels like we're watching someone's personal diary like 'Cloverfield' or lost reels of film as in 'Cannibal Holocaust.' Instead, we're followers of the madman and his plan. When he sleeps, the video cuts out. What he sees, we see, what he does, we're powerless to stop him. 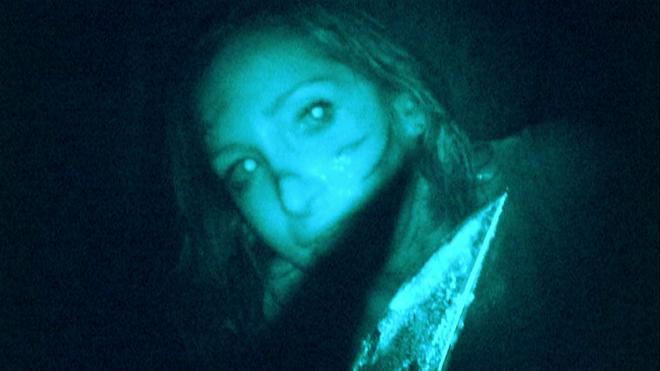 While 'Hangman' proves to be incredibly creepy with a great cast, the film falters during the second act. The film is already short at just 85-minutes, but the second act tends to drag on longer than it should. This stretch of time is largely dedicated to our creepy madman not really doing anything direct and just observing the family. So, in a roundabout sort of way, it's like we're watching someone's family videos except this guy is a sadistic, murderous stalker. If you can make it through the 40-minutes or so of slowness, the payoff in the final act is well worth it.

I've never been a big fan of the found footage genre - at least most of the Horror films that have come out under that shingle. I dug 'The Blair Witch Project' when it first came out, but I've never been drawn in by the 'Paranormal Activity' flicks in the way that I'd hoped. I just don't get scared by them or generally feel the least bit of tension. So many fount footage movies are like watching those shows about guys trying to find Big Foot in the dark, they just get silly after awhile and I lose interest. 'Hangman' on the other hand, that one struck a cord - more with the idea behind it than how it was filmed. Just the idea of some creep living in your house gets the hairs on the back of my neck to stand on end. This film proves to be a slick take on the serial killer genre and found footage flicks at the same time. It might not get everyone's interests piqued, but if you like your horror flicks creepy and slightly disturbing, 'Hangman' should be on your radar.

'Hangman' arrives on Blu-ray thanks to Alchemy pressed on a Region A locked BD25 disc. Housed in a standard Blu-ray case with a slip cover, the disc opens to previews for other Alchemy releases before arriving at the main menu that offers standard navigation options.

With a 1080p 1.78:1 transfer, 'Hangman' is a case of filmmaker intent. Because virtually the entire film was shot using commercial-grade video cameras, this movie is regularly soft, with details only really showing up in closer foreground shots. Often times the movie looks like it was shot on a first generation smartphone. Colors are a bit skewed as a result depending on the location. For example, there's a scene where the madman is stalking Kate Ashfield's character on a train. Because of the fluorescent lighting, Kate and the other actors in the shot have a greenish-looking flesh tone to them. That's pretty much how the rest of the movie plays. Depending on lighting, it can look amazing or rather sickly. A large portion of this film was shot using night vision casting the entire screen in hazy shades of green. It's not a beautiful looking movie, but it's the way it is intended to look.

The video for 'Hangman' is a solid indicator for the Dolby TrueHD 5.1 track. It's rough around the edges, dialogue is audible but still has a tinny quality to it because it would appear that no professional audio equipment was used and relied on the ones built into the cameras. As a whole this may not be much of a surround-worthy track. There isn't a score to speak of to keep the energy flowing, instead we get a lot of breathing to break the silence. Imaging is likewise subdued since most of the sound effects keep to the front/center channels. Levels are just fine since this is an already quiet sounding movie, sudden spikes in volume or lulls are handled really well. This track easily could have just been a stereo mix and had been just fine.

As someone who generally isn't a fan of found footage flicks, I found 'Hangman' to be a welcome breath of fresh air. While I wouldn't ever call it scary, it's unnerving and creepy as all get out and once the third act kicks in it doesn't let up. Alchemy has brought this film to Blu-ray with an A/V presentation that maintains filmmaker intent. It may not look or sound pretty but that's by design. Sadly, extra features are virtually nonexistent. 'Hangman' is definitely worth a look.

Sale Price 4.97
List Price 9.7
Buy Now
3rd Party 4.97
In Stock.
See what people are saying about this story or others
See Comments in Forum
Previous Next
Pre-Orders
Tomorrow's latest releases