When you think of film noir, such venerable Hollywood tough guys as Humphrey Bogart and Robert Mitchum spring to mind. But a few of the finest, most natural noir performances emanate from an unlikely source: Dick Powell. Yes, that Dick Powell, the baby-faced (some might say wimpy) crooner who spent the bulk of the 1930s romancing wholesome tap dancer Ruby Keeler in kaleidoscopic Busby Berkeley extravaganzas like '42nd Street' and 'Footlight Parade.' But by 1945, Powell's bland image craved an overhaul, and he fought hard to play cynical private eye Philip Marlowe in 'Murder, My Sweet,' a gritty adaptation of Raymond Chandler's 'Farewell, My Lovely.' The gamble paid off. Audiences embraced the new Powell, providing a much-needed adrenaline shot to his faltering career, and opening the door to similar roles in 'Cornered' and - what has instantly become one of my favorite film noirs - 'Pitfall.' Perhaps most importantly, nobody ever called Powell a crooner again.

One of several movies to be mounted by fledgling independent production companies in post-World War II Hollywood, 'Pitfall,' like many of its sister films, would ultimately flounder after its studio (in this case, the short-lived Regal Films) went bankrupt. With no major releasing corporation behind it to handle archiving and television distribution, 'Pitfall' went largely unseen for decades following its initial run. And that's a crying shame, because André De Toth's taut, engrossing, and surprisingly adult thriller outclasses many better-known and bigger budgeted titles. 'Pitfall' is a diamond in the rough-and-tumble noir catalogue, and thankfully it's been rescued from obscurity by the folks at Kino Lorber and given the wide exposure it has always deserved.

I consider myself a seasoned noir junkie, but I was unfamiliar with 'Pitfall' and expected a bargain-basement, second-tier noir film that might hold my interest, but would lack distinction. Though I was right about the film's low budget and solid entertainment quotient, I was dead wrong about its content and presentation. 'Pitfall' grabbed me from the opening frames, not because of any flashy technique or action-packed chase scene, but because it's so relatable, so real, so...normal! This story isn't a house of cards built on a series on left-field twists, triple crosses, and style for the sake of style; this is an adult, almost wholly believable yarn that unfolds and progresses naturally and ends in a refreshingly realistic manner. Some movies are termed shocking because of what they depict. 'Pitfall' is shocking - in a good way - because of what it doesn't depict. In many ways, it's an anti-noir film. Whenever it comes to a crossroads, we expect it to follow the noir playbook and go one way, but it almost always surprises us and goes the other. And by taking the road less traveled, we really have no clue where it will lead or how the conflicts will be resolved.

John Forbes (Powell), like countless other post-war males, leads what looks to be an idyllic life, but he's far from satisfied and afflicted with a crippling case of ennui. Average, middle-class, and living in a modest suburban home with his loving, supportive wife Sue (Jane Wyatt) and precocious, freckle-faced son Tommy (Jimmy Hunt), John works in downtown L.A. in the insurance business (shades of Fred MacMurray in 'Double Indemnity') and he's sick to death of his routine, unexciting, excruciatingly ordered, and unfulfilling existence. "I feel like a wheel within a wheel within a wheel," he complains to his wife. "I don't want to be like 50 million others." Sue tries to bolster his spirits, but John takes all his blessings for granted and gives the impression his masculinity has been somehow compromised by his cushy, dull life.

His jaded outlook begins to change, however, when he comes in contact with Mona Stevens (Lizabeth Scott), a glamorous blonde model and girlfriend of Bill Smiley (Byron Barr), a convicted embezzler who's serving time in jail. It seems Bill bought Mona a bounty of expensive gifts with the funds he stole, and it's John's job to repossess the loot. Yet what begins as an awkward business encounter soon turns personal. Mona spices up John's dreary life, stimulating both his libido and ego, but she's unaware he's married, and both must contend with the hulking, burly J.B. MacDonald (Raymond Burr at his glowering, creepy best), a sociopathic private detective in John's employ who's obsessed with Mona and resentful of John's involvement with her. Tensions quickly escalate, and while John worries his wife may learn of his affair, MacDonald continues to harass Mona and plots to make life even more miserable for John, who finally begins to realize just how lucky and secure he once was.

'Pitfall' is unique because its main characters go against the noir grain, rarely behaving in the way we expect. John more closely resembles a Hitchcock hero, a mild-mannered everyman who suddenly finds himself in a tense and dangerous situation. Most of us walk in his shoes and can identify with his feelings, and that's rare in the seedy world of noir. Sure, he's looking for a little trouble, but his experiences might deter similar restless souls from making the same bad choices. Powell plays him just right - detached, aloof, disillusioned, a lost man who feels like he's on death row in a suburban prison. It's not flashy acting, but it's real and it strikes a chord.

Of course, when we first lay eyes on Mona, we peg her as a sultry, calculating, lethal femme fatale in the Barbara Stanwyck, Lana Turner, and Ava Gardner vein, but nothing could be further from the truth. Mona is a different kind of femme fatale, one with a heart of gold and pretty good morals who's an innocent victim of three men who take shameful advantage of her. Yet like Typhoid Mary, she brings each of them no good fortune. Never in a noir movie have I seen a female character quite like her, and Scott - who's far from an A-list actress - makes her fascinating to watch.

Even Sue is atypical, much spunkier and more perceptive and intelligent than the garden-variety housewife who wears an apron and never disagrees with her husband. It's not a large role, but Wyatt - who would win three Emmy Awards for playing a similar part a few years later in the classic TV sitcom 'Father Knows Best' - makes the most of it, crafting a strong, forthright portrayal that previews the modern woman decades before she would become a mainstay in American society. Her final scene with Powell is simple enough, yet years ahead of its time and one of the reasons 'Pitfall' resonates so strongly. The ambiguous ending is also rare for both the period and the genre, as it leaves several of the characters lives up in the air and emphasizes life's inherent unpredictability.

De Toth, who's best known for helming the original 'House of Wax' in 3D, tells the story with a minimum of fuss. Handcuffed by a tight budget, he makes the most of what he has to work with, crafting interesting images without pandering to the patented elements of noir style. Brisk pacing, sardonic humor, and a palpable sense of purpose also propel 'Pitfall' into the top echelon of noir dramas, where this long-lost gem has always deserved to be. 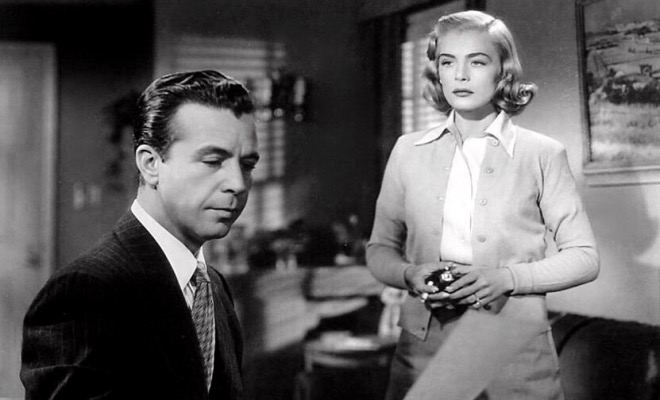 'Pitfall' arrives on Blu-ray packaged in a standard case. Video codec is 1080p/AVC MPEG-4 and audio  is DTS-HD Master Audio 2.0 mono, Once the disc is inserted into the player, the static menu with music immediately pops up; no previews or promos precede it.

The source material for 'Pitfall' comes from the UCLA Film Archive, and despite a fair amount of nicks, blotches, and a few faint stray vertical lines, it's in fairly good shape. A natural-looking grain structure preserves the feel of celluloid and provides essential texture to this underrated film noir, while strong clarity and contrast combine to produce a vibrant image. Consistency, however, is an issue, as some scenes appear more ragged, soft, and overexposed than others, but on the whole, Kino Lorber's 1080p/AVC MPEG-4 transfer accurately renders the stark cinematography. Shadow detail - a vital element of noir - is quite good, a nicely varied gray scale adds depth and presence to the picture. Typical of the period, the close-ups of Scott exude a gauzy quality, but those of Powell, Wyatt, and Burr are sharp and vivid. No noise or crush interfere and no digital enhancements have been applied. Though 'Pitfall' deserves a full-blown restoration, the fact that a 65-year-old independent production can still look this fresh is good news indeed, and kudos go to Kino for dusting it off and presenting it with care.

Constant surface noise is the culprit that drags down the DTS-HD Master Audio 2.0 track, as incessant static, pops, and crackles compete with other sonic elements throughout the film. Otherwise, the audio is perfectly passable, with accents like gunfire, revving car and boat engines, and fisticuffs all sounding crisp and distinct. Dialogue, even when spoken in breathy tones by Scott, is clear and comprehendible, and the anonymously written music score fills the room with ease. A few bits of distortion occasionally creep into the mix, but never overwhelm this aged, utilitarian track.

Just a couple of supplements flesh out the disc.

Even diehard noir buffs may not have heard of 'Pitfall,' but this engrossing, well-acted, and efficiently executed portrait of one man's identity crisis and the infidelity that turns his life upside down packs a potent punch. Dick Powell, Lizabeth Scott, Jane Wyatt, and Raymond Burr all file excellent portrayals, and the adult screenplay, relatable characters, and realistic depiction of complicated relationships keep the movie fresh and relevant, despite its advanced age. Kino Lorber's Blu-ray presentation is pretty bare bones (an audio commentary is the only true extra) and the video and audio transfers are a bit ragged, but don't let those elements deter you from checking out this lost gem that deserves a prime spot in the ranks of noir and earns a hearty recommendation.