When a terrorist group kidnaps retired CIA field operative Leonard Turner (Bruce Willis), his son Harry Turner (Kellan Lutz), a government analyst who has been repeatedly turned down for field service, launches his own unsanctioned rescue operation. While evading highly skilled operatives, deadly assassins, and international terrorists, Harry finally puts his combat training to the test in a high-stakes mission to find his father and to stop a terrorist plot.

After a day of watching and reviewing new movies, some days I just really miss the action movies of the 80s. Now I don't mean the big budget action flicks starring Schwarzenegger or Stallone, I mean the cheap ones, the down and dirty no-budget Cannon films of old. If a movie had Charles Bronson or Michael Dudikoff or Dolph Lundgren or magically all three of them (sadly that never happened), you knew you were going to be in for a good time. The movie wouldn't necessarily be good, but it'd at least be entertaining in its own cheap, exploitation way. Modern direct to video no-budget action flicks just don't have that same spark of creativity and ingenuity. Today, we get movies like 'Extraction' featuring Bruce Willis and D.B. Sweeney in supportive roles and features newcomers like Gina Carano and Kellan Lutz. I don't think I've ever seen an action movie try so hard and yet still end up being a complete bore like this one.

When you're a field agent for the C.I.A., you tend to have family complications. Namely, when the bad guys learn who you really are they tend to find and kill your family. This happened to Leonard Turner (Bruce Willis) twenty years ago. Thankfully Leonard's son Harry (Kellan Lutz) survived the attack but his wife was killed. As Harry grew up, he had an absentee father and a growing lust for revenge fueling his every move - including going to work for the C.I.A. as an analyst. But what Harry really wants is action. He wants field work. He wants to find the men responsible for killing his mother - but that means passing for field work. Try as he might, Harry manages to fail the field assignment ability tests - not because he can't shoot straight or hold his own in a fight - but because powers with more authority than him are hellbent on keeping him from risking his life on a quest for revenge.

When Leonard's deep cover operation is blown and a piece of potentially destructive technology known as the Condor is stolen, not even family friend and fellow agent Robertson (D.B.Sweeney) can keep Harry from leaving his desk to save his father. Initially, the C.I.A. tasks their field agent Victoria (Gina Carano) who was once romantically involved with Harry to bring him in. But once she hears of the full breadth of the problem and learns that a wetwork order is out for her former boyfriend, she can't help but get involved. As the C.I.A. desperately tries to track down Harry, the bigger mission is recovering the Condor before it's destructive capabilities are unleashed upon the world! 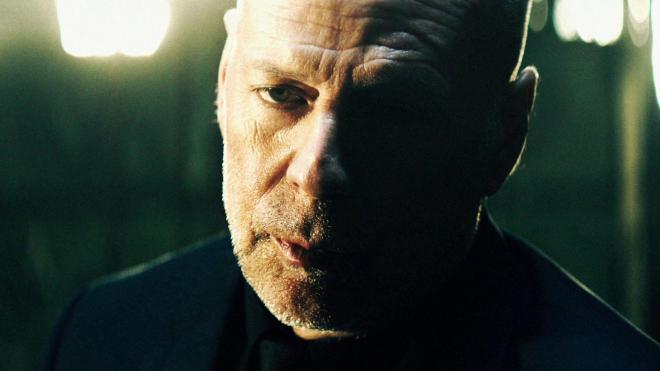 'Extraction' is one of those movies that takes the long road to go nowhere fast. It struggles at every turn to make the audience feel a sense of danger and urgency but because nothing has been set up well, we just don't care and the action ultimately fizzles. At the center of the problem is a distracting lack of character development to the point that the only thing we're sure of is that Kellan Lutz and Bruce Willis are supposed to be father and son. Every other piece of relevant and potentially interesting and exciting exposition is cast off in such a way that you don't buy it or don't even care. So, by the time the big bang finale comes and the true evil bad guy has been unmasked you realize that what you just saw would have worked as an action-adventure episode of 'Scooby-Doo Where Are You?'

The biggest problem is a lack of genuine interest on the part of the cast. While Kellan Lutz looks like he's trying his best, there's a car chase sequence midway through the movie where it all of a sudden feels like he's just going through the motions. Then we have Gina Carano. While her acting chops are hardly lean, she's an attractive and physically dominating presence who can kick some serious butt when called for. So why does she spend half the movie just pointing a gun at things? If this had been a Cannon movie she'd have taken off one of her high heeled shoes and jabbed it in some poor evil underling's face. That would at least have made 'Extraction' interesting to see.

When your key stars of a film fail to spark a fire, you then fall on old stalwarts like Bruce Willis and D.B. Sweeney to inject some life into the thing. Unfortunately, for 'Extraction' neither actor appears to care much. Bruce Willis has all of three scenes in the entire movie and in those precious few moments, he just stands there looking sad and dejected rather than like a seasoned C.I.A. field agent who could make a bomb out of chewing gum, a pencil eraser, and an old kleenex. As for D.B. Sweeney, he's an actor who I've generally enjoyed seeing in just about every movie I've ever seen him in. I've heard of an actor phoning in a role and treating it like an easy paycheck, but in 'Extraction' he literally Skypes in 90% of his work - seriously, most of his role is other people talking to him on a computer screen.

When you pull together a weak or bored-looking cast, a dreadfully tired and predictable plot, and action scenes that are so confusingly shot that Paul Greengrass probably couldn't make sense of what was happening - you've got a pretty bad action movie. 'Extraction' so easily could have been a great piece of 80s inspired action movie mayhem, but instead, it's all flash and no bang. As an action film, it fails to the point that the only exciting thing about it is the beautiful cover artwork. Big budget action movies wish they had a poster as cool as that. 'Extraction' is the movie that deserves a mass of photoshopped heads floating against a black backdrop because that about all this movie actually is.

'Extraction' arrives on Blu-ray thanks to Lionsgate and is pressed on a Region A BD25 disc. Housed in an eco-friendly Blu-ray case, the disc opens to trailers for other Lionsgate releases before arriving to the main menu. Also included is a Digital HD voucher.

Before I dig into analyzing the video portion of this review I have to ask, how well do you like the hyper-colorized teal/orange pushed image of your average Michael Bay movie? If that look isn't your cup of tea, you're probably not going to have much fun with the 1.78:1 1080p transfer 'Extraction' has to offer. Shot digitally, the film uses a number of color and grain filters to give it a gritty and grimy vibe that at times is extremely distracting. Details are sharp and plentiful, but at times because of the hyper colorization can become lost. Black levels are mostly very strong giving the image a nice sense of depth to it, but then a grain filter kicks in and the image becomes noisy looking leaving things looking flatter and contrasty. Colors are virtually impossible to grade because they change from scene to scene. One moment people have a yellow complexion, then a red one, then a blue, a green and so forth. If you're going to notch this one up to achieving a desired appearance, this transfer does it justice, however, it's a pretty garish looking film making it difficult to grade.

With a robust DTS-HD MA 5.1 audio mix, 'Extraction' earns some high marks. I'll say one positive thing about having a kinetic energy running through a disjointed action film, the sound design ends up being rather impressive. Throughout the entire run of the movie the surround channels are constantly engaged and rarely let up - even during the relatively few quiet conversational moments. Bullets, explosions, car engines and the booming score by Ryan Dodson all work to keep the mix alive and moving giving a terrific sense of space and directionality. While being a loud and bombastic movie, I never had any issue with levels or felt the need to adjust volume. Dialogue comes through crisp and clear and keeps to the center/front channels allowing the sides and rears to do the accent lifting. All around a rock solid audio mix.

Audio Commentary: Director Steven C. Miller and Kellan Lutz spar words together for this track. It's a lively conversation as the two sound like they're enjoying themselves. It's a pretty decent listen overall and provides a lot of little interesting nuggets about casting, shooting, and locations.

The Making of 'Extraction': (HD 12:57) This is your standard EPK extra feature, a few bits from the cast and crew and little else.

Deleted/Extended Scenes: (HD 4:42) There are a few little character nuggets in here but nothing that would have made the film itself a different experience with their inclusion.

Cast and Crew Interviews: (HD 29:10) Pretty much the only person not interviewed for this movie was Bruce Willis. Everyone offers a little extra bit to make this feature better than average but doesn't really go into much depth about the making of the film. Mostly just a barrage of soundbites.

Going into 'Extraction' I wasn't expecting much, I mean after all, it's a direct to video action movie with a couple of recognizable faces. I was surprised at how paint by numbers the whole affair was and while there are a number of impressively choreographed fight sequences, car chases, and gun battles I was surprised at how mundane the movie was. Lionsgate has brought this movie to Blu-ray with a decent transfer and a solid audio mix and some genuinely decent extra features. Even if you're a "Die Hard" action movie junkie needing a quick fix, I just can't suggest this movie when there are already so many other better movies out there. If you're very curious and absolutely must see this movie, rent it first.

Sale Price 9.99
List Price 14.99
Buy Now
3rd Party 2.9
In Stock.
See what people are saying about this story or others
See Comments in Forum
Previous Next
Pre-Orders
Tomorrow's latest releases