Five of Edgar Allan Poe's best-known stories are brought to vivid life in this heart-pounding animated anthology featuring Sir Christopher Lee, Bela Lugosi, Julian Sands, Roger Corman and Guillermo del Toro. Murderous madmen, sinister villains and cloaked ghouls stalk the darkened corridors of Poe's imagination, as his haunting tales are given a terrifying new twist by some of the most beloved figures in horror film history. Stories include: The Tell-Tale Heart, The Fall of the House of Usher, The Masque of the Red Death, The Pit and the Pendulum, and The Facts in the Case of Mr. Valedemar.

I've long believed that in order to adapt a novel, short story, or any other literary work into a good movie, you must bring an amount of creativity to the project rather than photocopying pages into a screenplay. While a slavish adaptation can work, I've often enjoyed a movie that brings something new to the table with the material. After all, if you're just going to copy the book word for word, why watch the movie at all? The works of Edgar Allan Poe have proven to be a deep well for filmmakers to draw from. From the Roger Corman classics from the 1960s to Stuart Gordon's classic take on 'The Pit and the Pendulum' in 1991, Poe's terrifying stories show how much can be interpreted while also staying true to the spirit of the original text. Writer and Director Raúl Garcia brings five of Poe's eerie tales to the screen using different animation styles and featuring an incredible cast of voice actors to bring the text to life.

The Fall of the House of Usher.

Beautifully narrated by the late Christopher Lee, this short takes the look and textures of a wood-carved stop animation piece to bring this tale of psychological horror to life. As is the case with the rest of the stories, this is not a perfect word-for-word adaptation of the text but rather a truncated version that allows much of the unique animation to convey the sense of dread and terror. This is a beautiful-looking adaptation that truly captures the spirit of the original work.

Now this is a particularly exciting adaptation. By taking an animation style that likens to something found in a 'Sin City' comic book, this short uses an archival audio recording of Bela Lugosi reading from the story. The imagery is stark and creepy and captures the psychological deterioration of the narrator. It's perhaps a bit too speedy of an adaptation, this is a story that could easily be (and has been) adapted into its own movie, but it's still a creepy watch. For a shortened version, it's a beauty to look at and I love hearing Lugosi's voice on such an old recording. It fits the visual tone of the animation perfectly. 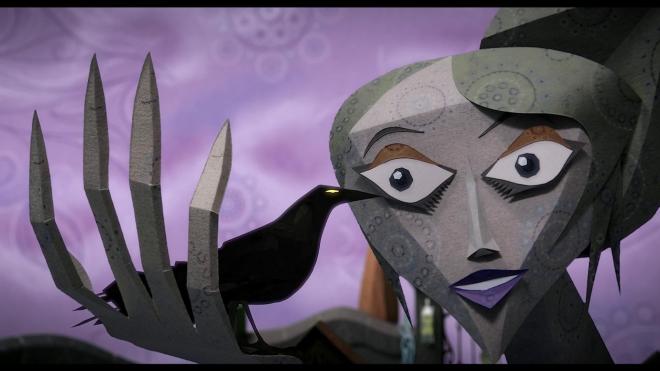 The Facts in the Case of M. Valdemar

Narrated by the great Julian Sands, this adaptation of one of Poe's lesser known tales is just awesome. It cribs the visuals of an old EC Comics horror book while making the main character appear like Vincent Price! The story itself was originally presented as a journal entry and in this format that it breaks away from the source material by giving the various characters a distinct voice. Julian Sands does a great job at narrating the story and voicing each character. The story about a doctor who hypnotizes a man just before he dies isn't my favorite Poe tale, but this adaptation makes it a creepy and colorful rendition. As a fan of old pulp comics, this is perhaps my favorite looking adaptation in this series.

The Pit and the Pendulum

Narrated by Guillermo Del Toro, this is a darn creepy, beautiful looking adaptation. It may not stick strictly to the text, but in concept, it gets most of the key beats in there. For the look of this one, some pretty solid CGI animation was used - think of a better than average recent video game cut scene. Del Toro's narration is subdued but a welcome presence. He reads the story with a grave sadness of predetermination that really ratchets up the tragic creepiness of it. I also liked the use of split screen to show multiple angles of what is happening during the more exciting and dramatic moments.

Masque of the Red Death

If one is to look at the various artistic visual interpretations this series has to offer, this presentation of Masque of the Red Death is perhaps the most beautiful. Using an animation style that looks like a watercolor painting, Without the use of any narration, the audience is left to infer the story. Almost like watching a silent film without any title cards. Those not already familiar with the original story may find this a bit of a stretch, but if you have an idea of the basic premise of the story you should appreciate the beauty of the work and how color, the character animations, and the music are used to tell the story. 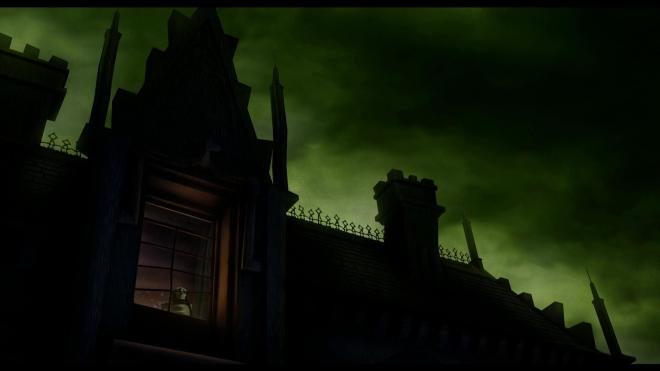 Taken as a whole, 'Extraordinary Tales' is a creepy and fantastic work of animation as well as adaptations of Poe's timeless stories. It's awesome that horror icons such as Christopher Lee, Bela Lugosi, and Julian Sands let alone Guillermo Del Toro and some fun voice work by Roger Corman were used for this collection of short animated films. This is clearly a work of passion for director Raúl Garcia and I love that he mined such great talent as well as used different horror-inspired visual styles to bring each story home. At just 73-minutes long, this is a great way to spend an evening on a chilly windy night. Maybe light a few candles as well - just to get the mood right. I think most horror fans and those you love the work of Poe should appreciate what 'Extraordinary Tales' has to offer.

'Extraordinary Tales' arrives on Blu-ray thanks to Cinedigm and is pressed on a Region A locked BD25 disc. Housed in a standard 2-disc Blu-ray case with identical slipcover artwork, this 2-disc set also features the film on DVD. The Blu-ray opens with a static-image main menu with traditional navigation options.

Presented in a 1080p 1.85:1 aspect ratio, this Blu-ray of 'Extraordinary Tales' is outright gorgeous. Since each segment looks vastly different from one story to the next, it's difficult to grade the presentation on consistency. Instead, I'm going to have to grade according to the mood each segment evokes. For their respective story, the picture quality and color pallet (or the lack thereof in the case of 'The Tell-Tale Heart') fits perfectly. Colors are bright and robust for the segments that warrant them, and subdued and soft for the others. 'The Facts in the Case of M. Valdemar' is perhaps my favorite of this set since it offers such bright pulpy primaries and fits that EC Comics mold so well. That said, I would consider 'The Masque of the Red Death' the most beautiful of the bunch. Black levels for each short are rich and inky giving this entire film a wonderful sense of three-dimensional depth. Free of any compression issues, banding or other visual annoyance, this is a near-flawless visual presentation.

'Extraordinary Tales' comes with a strong DTS-HD MA 5.1 audio track. Since all but one of the shorts is narrated, dialogue is appropriately kept front and center allowing the surrounds to pick up the subtle background and ambient sound effects. Imaging isn't really an issue here as there just isn't much call for channel movement or a sense of directionality -although there is an appropriate amount of that happening through each short. The film's eerie and magnificent score by Sergio De La Puente has a beautiful resonance to it and power that evokes an appropriate yet unique mood for each story. Levels are spot on without any need to monitor your volume while viewing. In the case of 'The Tell-Tale Heart,' I really appreciate that the filmmakers didn't attempt to drastically clean up Lugosi's narration as the amount of hiss and infrequent pops in the recording actually serve the story very well and amps up the creepiness. All around this is a fantastic audio track.

Audio Commentary: Director Raúl Garcia provides a fantastic commentary track. If you're an animation enthusiast - consider this a must listen. He goes into great detail about the adaptation process as well as the animation decisions that were made for each short.

The Making of 'Extraordinary Tales': (HD 40:41) This is an awesome, in-depth look at the making of each short film involving director Raúl Garcia as well as his crew of animators and co-writers.

The Art of 'Extraordinary Tales': (HD 5:51) The only bad thing I can say about this extra feature is that it's entirely too short. You could easily spend an hour for each short story talking about what it took to achieve the visual look and feel for each story.

You've got to love a great work of animation - especially when it involves excellent adaptations of the works of Edgar Allan Poe! Each story is given a distinct voice by its respective narrator as well as a slick and appropriate visual style. No two shorts are exactly alike so your attention should never wane from one story to the next. Cinedigm has done an exceptional job bringing 'Extraordinary Tales' to Blu-ray offering a stunning A/V presentation as well as a few genuinely worthwhile extra features to dig through. I'm calling this one Highly Recommended simply because I can't wait to watch it again, let alone the other great aspects of this Blu-ray release.

Sale Price 14.96
List Price 29.95
Buy Now
3rd Party 9.96
In Stock.
See what people are saying about this story or others
See Comments in Forum
Previous Next
Pre-Orders
Tomorrow's latest releases