In “Flesh and Bone,” Claire, played by former American Ballet Theatre principal Sarah Hay (Black Swan), joins a prestigious ballet company in New York.  She’s beautiful, soulful, talented and an emotionally wounded young woman who somehow still possesses an innate innocence and fragility while at the same time harboring self-destructive tendencies and a vaulting ambition.  Claire is a transcendent ballerina, capable of reaching the sublime but her inner torment and aspirations drive her in unforeseeable ways.  Along the way, she encounters drugs, sex, starvation, desire, betrayal, pain, punishment, fear, rebellion, insecurity and ambition.

The worst part about watching a really good television show is the addiction. You become addicted to the hilarity or the suspense or the drama on screen. You become addicted to the personable and relatable characters you're intended to root for while also becoming addicted to seeing the villains they work against. You eagerly tune in each week or with modern streaming services in successive episodic binges to get your fix. While not every television show to come through the creative pipeline garners that level of enthusiastic devotion, the shows that do achieve that response from an audience are a rare treat. Starz Network's 'Flesh and Bone' from Emmy Award-winning creator Moira Walley-Becket takes a visceral look at the world of ballet, grabs hold of you, and doesn't let go for a moment.

Passion can only get you so far with any career choice. Likewise, skill can only get you so far. There is an element to just about any profession that requires an amount of raw natural talent in order to be the best there is. Claire Robbins (Sarah Hay) holds that raw talent and is about to light up the world of professional ballet. Like an angel sent from who knows where, Claire has arrived in the company of stalwart artistic genius Paul Grayson (Ben Daniels). Paul is a man who gets what he wants and will ruin anyone through the mill to get it or just to prove a point. When he tries to embarrass Claire in front of the entire troop, his attempt to denigrate the young woman backfires as he exposes her impressive and beautiful talent.

With such an exciting discovery exclusive to his company, Paul must convince the patrons that this young woman is worth upending their already programmed season and commission a new ballet - even it means pissing off star dancer Kiira (Irina Dvorovenko). As Claire's star is on a meteoritic rise to fame and glory, her mysterious past involving her violent brother named Bryan (Josh Helman) is about to catch up with her. As her domestic life threatens her professional career, Claire is also confronted and ostracized by other dancers within the company, especially her roommate Mia (Emily Tyra). Claire is going to have to work through all the numerous issues facing her if she and the rest of the company are to have a successful opening night. 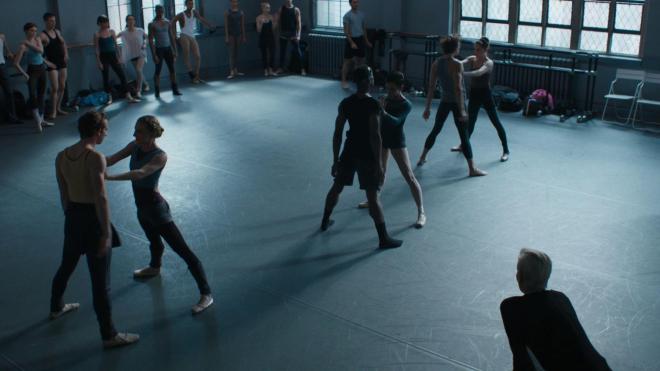 'Flesh and Bone' is one of those shows where in a fever of excitement you want to run up to the closest person and start saying "This happens, and then this happens, and then wait until you see this…" in such a way that the person you're talking to will have no idea what the heck you're talking about - but they'll understand your fervent enthusiasm and may be willing to give it a look. If you haven't seen or heard of the show before, don't feel left out of the loop. Sadly it looks like 'Flesh and Bone' may well be one of those amazing shows that won't see a second season. Part of that has to do with the fact that the final episode saw a long delay, but then there is a story thread involving incest that no doubt many may be put off by. I put that out there without context as it is something that does creep up, but is nowhere near the focus of the show and shouldn't dominate your thinking of the work - also, it comes to a fitting and dramatic end for the finale and works into the theme of the ballet itself. There is a lot happening and going on throughout the show that if it is a one season wonder, it's still a great work of television.

'Flesh and Bone' is also one of those shows that you want to talk about, but know that you really can't due to the many plot intricacies. While there aren't much in the way of "shocking" "tell no one" spoilers, I would say that by going into too much detail about the events within the show will diminish the return on investment. Really, you should be here to witness some incredible performances. Sarah Hay is absolutely fantastic as Clair as she is wholeheartedly believable as a guarded, sexually-repressed young woman who has faced untold amounts of abuse in her life and is finally on track to putting her life back together. As amazing as she is in that role, it's Ben Daniels as the tyrannical Paul Grayson who steals absolutely every scene he's in. You empathize with him because of his passion and love for the art of ballet, but at the same time, you're scared to death of what he could potentially do to someone just to make himself feel better. And then on the other side of the coin you have 'Justified's' very own Dewy Crow Damon Herriman in a wonderful supporting role as perhaps the only truly innocent and pure character in the film. Each of his scenes, particularly one where he recites a piece of his novel for Claire, are great and welcome respites to the tension and drama contained within the rest of the show.

Of course, none of this show would be anything worth seeing without the incredible athleticism on display by the lead actors and those incredibly talented men and women rounding out the cast. It's very clear from the first moments these performers start to practice their routines that they are skilled dancers as well as actors. They convey the pain of a strained muscle, the emotional turmoil, not to mention what it must feel like having to perform after losing a toenail. The actors do all of that with incredible grace and beauty that it's impressive to see on screen even when they're simply warming up. Ballet may not be one's first idea for incredible television but the cast of this show hooks you into this intricate world of dance and doesn't let you go.

'Flesh and Bone' arrives on Blu-ray courtesy of Starz/Anchor Bay. Pressed onto two Region A locked BD50 discs, the discs are housed in a standard two-disc eco-friendly case. Both discs open directly to their respective main menus. All supplementary material is found on disc two.

Given the world of ballet and the pageantry that goes into the costuming, let alone each performance, it's easy to see why the 1.78:1 1080p transfer looks as amazing as it does. Bringing an almost film-like quality to it, the image is flooded with fine details allowing the audience to appreciate the beaten and worn practice rooms, the New York scenery, to the intricate details of the dancer's practice gear and costuming are on display. Colors skew a bit colder favoring the blue tones so much of the time the show feels like it's taking place in the middle of dreary winter. Given the grading effect, colors tend to run a bit darker but still fit within the thematic context of the show. Black levels are rich and inky much of the time allowing for a strong sense of depth. Only a time or two did I notice any crush issues where the image looked flatter than usual or created a floating head effect. Free of any other compression artifacts or notable defects, this is a damn fine transfer and fans of the show should be happy to see it.

Each episode of 'Flesh and Bone' is given a strong and resonant Dolby TrueHD 5.1 audio mix. For all eight episodes there is a rich sense of atmosphere to the track, even when what is happening on screen has almost no sound, I was constantly aware that the surround channels were being used in an organic way that didn't distract from the moment. The dancing scenes and street scenes are where the track truly shines, but dialogue bits and arguments erupt with a ferocious intensity that can be jarring but still incredibly effective and pull you into the scene. Dialogue, sound effects, and the score all occupy equal spacing so nothing is lost and work to create a rich auditory pallet. Levels are strong, you may need to watch your volume a time or two as some drop offs can occur where a conversation can suddenly become very quiet, but those moments are few and far between. All around these are great audio tracks that serve the show well.

Creating the Wold of 'Flesh and Bone': (HD 6:37) As the only extra feature given to this set, this is tragically brief. It's a quick look at the real world of ballet and the competitive nature of the art and how it fuels the creative aspects of the story contained within 'Flesh and Bone' but sadly due to the short run, this feature barely even scratches the surface of the content it tries to cover.

I love and hate a great new television show. I loved 'Flesh and Bone' because it is filled with incredibly dense characters portrayed by fantastic actors and actresses against an intricate tapestry of professional ballet. It's a dark and gritty show that grabs hold and doesn't let go all the way through to the very end. Sadly, that finale may well be the end unless something changes soon - fingers crossed this series gets another eight episodes because it leaves you wanting more. Starz/Anchor Bay have done a bang up job bringing the series to Blu-ray offering a first-rate A/V presentation, but sadly they skimped on the extra features. I wouldn't necessarily call this one worth a blind buy, the subject matter and content could put some folks off, but darn it all if it isn't great television, I'm still calling it recommended.

Sale Price 12.64
List Price 42.99
Buy Now
3rd Party 12.64
In Stock.
See what people are saying about this story or others
See Comments in Forum
Previous Next
Pre-Orders
Tomorrow's latest releases