Memories of the Sword

As the greed and excess of a corrupt Monarchy threatens to destroy the once-glorious Goryeo Dynasty, three legendary warriors lead a revolt to overthrow the empire and save its people. But when deceit and betrayal costs the life of a master swordsman, a plot for justice and revenge is set into motion, raging for decades between the two survivors. From the director of CHILDREN OF HEAVEN and starring Byung-hun Lee (THE GOOD, THE BAD, THE WEIRD, TERMINATOR GENISYS), MEMORIES OF THE SWORD is a lavish epic that blends tragic historical drama with thrilling swordplay and martial arts.

Do you ever feel like when you sit down to watch a movie that within the first few moments you start to feel like you've already seen this particular movie? I don't mean in the sense of story familiarity or a re-telling of the traditional "Hero's Journey," I mean that a particular genre can become so saturated that there just isn't any magic left in it. Director Heung-Sik Park's 'Memories of the Sword' is another entry in the Fantasy Kung-Fu action film sub-genre that borrows heavily from films that have come before and fails to do anything new with the material.

Hong-yi (Go-eun Kim) has bigger dreams than tilling away in a sunflower field. She sees herself as a warrior, a woman of action and ability that is just as talented as any other man. In order to solidify the training her mother has given her, Seol-hee labors over a single sunflower plant, giving it plenty of room away from all of the others and more water than any of the others. When the plant stands at least twenty feet high, she know's it's time to test herself. Managing to leap over the gigantic plant in a single bound, Hong-yi knows she's outgrown this peasant life and is ready for combat in a fighting arena dominated by men where she can actually earn a living.

When Hong-yi's exploits within the arena accidentally expose her mother Seol-ring (Do-Yeon Jean) to the commander of the army Deok-gi (Byung-hun Lee) who viewed Seol-hee's performance, the entire family is put in danger. As Hong-yi learns of her true parentage and the circumstances that she came to grow up and be trained by the woman she knew as her mother, the young girl is put on a path of revenge and redemption. As shadowed history comes to light, the truth may be more dangerous to Hong-yi's survival than any blade she duels. 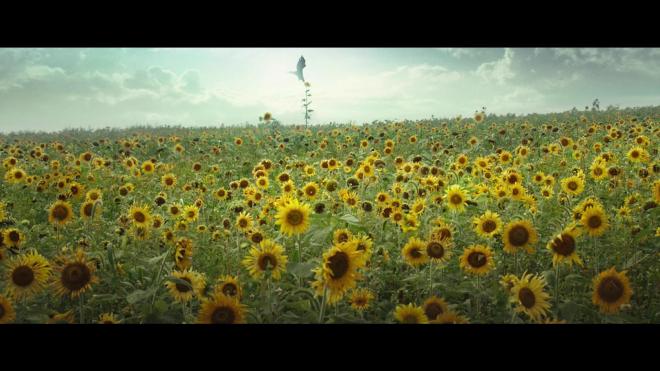 It's hard to know where to start when analyzing a film like 'Memories of the Sword.' For starters, it is beautifully photographed with wide open vistas and close and intimate character moments. The action scenes may be a tad too "shaky-cam" for my tastes, but they work and provide a visceral quality to the swordplay on screen. The trouble with 'Memories of the Sword' is that its structure is unnecessarily jumbled for such a straightforward story. Flashbacks fly around as suddenly as swords are drawn in this film and the effect can be jarring since there is no lead-up context to why we are actually seeing this particular flashback. There seems to be an almost lazy approach to these flashbacks as if to say "Oh, they'll make sense later" but because there are so many of them and they happen at strangely motivated moments, it's hard to get a grasp on the story and motivations of the characters.

As someone who loves a good martial arts flick, I have to say I'm getting pretty tired of the "wire-fu" a lot of recent films are employing. Ever since movies like 'Hero,' Crouching Tiger Hidden Dragon,' and 'House of Flying Daggers' lit up the international boxoffice, the "wire-fu" movies have become a dime a dozen. While those films I just mentioned by no means were pioneers of the genre, they merely perfected it and in so doing set a very high bar to reach. While I don't bemoan the presence of wire-work in my martial arts movies, I do get tired of seeing it applied unnecessarily. 'Memories of the Sword' is one of those martial arts films that just didn't need that element added to it. It was already trying very hard by telling a multi-generational story of political intrigue, love, and betrayal with martial arts and swordplay, the wirework just makes it seem silly and makes the story difficult to take seriously. The disjointed and cumbersome editing was already having an effect on the story, the out of left field wirework horseplay just sinks this film.

The uncreative action direction and the editing of 'Memories of the Sword' is a real shame because the performers are giving this work their all. They're trying to fill their characters with a sense of purpose and drama, but the editing undercuts their efforts. Just when you start to feel some danger or tension from a bit of good dialogue or the excitement from an action scene, out comes a confusing flashback that provides no context to the adjoining scene. If the editing doesn't pull you out, the random flashy wirework that lets a character fly twenty feet into the air will do the job. If the action had been a tad more restrained, if the editing had been cleaner, 'Memories of the Sword' could have - and by all reason - should have been a solid action/adventure martial arts film. As it stands, it's mediocre at best as it tries entirely too hard to mimic better movies rather than stand on its own two feet.

'Memories of the Sword' arrives on Blu-ray thanks to Well Go USA and is pressed onto a Region A Locked BD25 disc. Housed in a standard case with identical slip cover, the disc opens to trailers for other Well Go USA releases before arriving at the film's animated main menu.

Digitally shot, 'Memory of the Sword' enjoys a beautifully detailed and colorful 2.39:1 1080p transfer. This transfer offers up the type of clarity that leaves everything on the screen. Fine facial features, hair and makeup work, costuming, the incredible production design are all clearly visible and appreciable. Colors are bright, warm and offer up a robust pallet that lets primaries have their day in the sun, especially blues, reds, and yellows. Flesh tones are accurate ensuring that everyone has a healthy color to them. Black levels are rich and inky with strong shadow separation creating an image that has a fantastic sense of depth to it throughout with little if any crush issues to note. Where there is a bit of a slip in quality for this transfer comes from some motion-blurring whenever the action scenes decide to get more frenetic. Aside from that aspect, this is a near-flawless transfer.

With a vibrant Korean DTS-HD MA 5.1 audio track, 'Memories of the Sword' scores full marks. From the film's opening sequence in the sunflower field to the combat arena and throughout the rest of the film, I was generally impressed at the sense of immersion this track generated. Dialogue is crystal clear and never an issue to hear and features good subtitles that don't try to "Americanize" the language too heavily. Atmospherics and backgrounds are used beautifully in ways that ensure the surround elements are constantly engaged but don't overpower the dialogue or the film's score. Some of the heavier action sequences can push the volume levels a tad, so you may want to keep an ear out for that, but I never felt like I actually needed to adjust the volume. All around a beautiful audio track.

'Memories of the Sword' is an example of a genre that needs to perhaps hit the pause button and take a breather. The martial arts fantasy genre is a saturated one and the convoluted edited with out of place wirework action scenes make this film a hard one to recommend. Genre junkies should still get a measure of enjoyment out of it, but again, the film's odd editing and use of flashback demands your fullest attention throughout. Well Go USA has done a fine job assembling this Blu-ray with a first-rate A/V presentation. Sadly the only extras is a trailer. If you're curious about this one, give it a rent first. A blind buy is a tough recommendation to make.

Sale Price 7.25
List Price 8.85
Buy Now
3rd Party 2.93
In Stock.
See what people are saying about this story or others
See Comments in Forum
Previous Next
Pre-Orders
Tomorrow's latest releases