The Maze Runner: The Scorch Trials

In this next chapter of the epic "Maze Runner" saga, Thomas (Dylan O'Brien) and his fellow Gladers face their greatest challenge yet: searching for clues about the mysterious and powerful organization known as WCKD. Their journey takes them to the Scorch, a desolate landscape filled with unimaginable obstacles. Teaming up with resistance fighters, the Gladers take on WCKD's vastly superior forces and uncover its shocking plans for them all.

Breaking free of the concrete-fortified glades, 'Maze Runner: The Scorch Trials' picks up immediately after the events of the first movie with an explosive action sequence that leaves little time to breathe and catch one's bearings. Once the dust settles, the volatile opening finds Thomas (Dylan O'Brien) and his posse of resourceful survivors walled inside a concrete-fortified building with even more tests and trials to perform before stumbling their way to another false sense of security and freedom. The maze, which served as both a place of fearsome mystery and a treacherous path for discovering the truth of their imprisonment, has been swapped for the more terrifying and perfidious labyrinth of human secrets and Machiavellian machinations. This makes for an effective follow-up to its surprisingly satisfying predecessor, weaving a larger web of complexity and intrigue that challenges its intended young adult audience -- though the end result still falls short. The second adaptation to the James Dashner sci-fi books largely feels like two movies trapped and overstuffed into one.

The first half is arguably the production's strongest aspect and sees Thomas, once again, tasked as leader of the pack whether by unfortunate necessity or through an unwarranted self-assertiveness that panics others to follow him on blind faith alone. His inability to explain or provide reasons for why the group (Kaya Scodelario, Ki Hong Lee, Dexter Darden, Alexander Flores and Jacob Lofland) should follow causes a bit of contention between Newt (Thomas Brodie-Sanger) and the determined but equally self-doubting Thomas. The couple instances of mild quarreling are of little consequence and frankly, pointless, except to drum up some unneeded drama. Nonetheless, his continuously skeptical personality uncovers the true intentions of the military controlled medical facility run by Janson (Aidan Gillen which has the 'Game of Thrones' star bringing his usual seemingly compassionate but suspicious air). Their much too easy escape has the kids trekking through a desert-covered, apocalyptic wasteland in search of the mysterious resistance militia, The Right Arm. 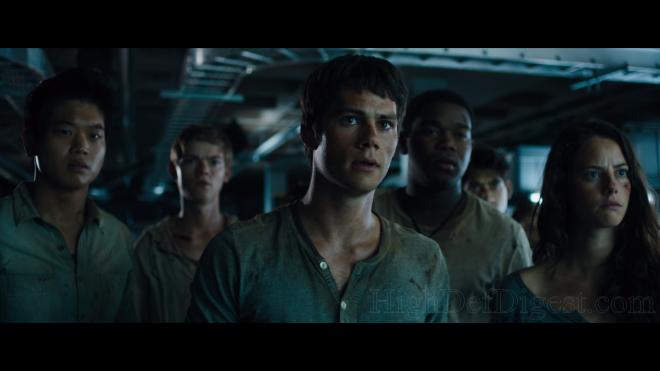 It's here where the plot works best because their journey turns out to be the toughest trial for the group, particularly on the leadership skills of Thomas after losing one of the kids to the Flare virus, which turns the infected into zombies called Cranks, and endlessly endangering the lives of the rest. The more welcomed drama allows O'Brien the opportunity to flex his acting chops even if director Wes Ball doesn't quite yet have the skill for selling the story's emotional periods. However, Ball fares better when exploring the virus's devastation upon humanity and the kids discovering pockets of societies trying to survive, joining forces with Brenda (Rosa Salazar) and Jorge (Giancarlo Esposito) in their quest for a safe haven. Sadly, the sightseeing is also somewhat short lived once the group finally meets with the resistance and the plot shifts gears into discussions about discovering a cure and the best methods for achieving that goal. It posits an interesting moral dilemma of utilitarian concerns, a bit of complexity that nicely sets this YA franchise apart from the rest.

Unfortunately, the filmmakers don't allow audiences enough to time ponder on the issue or become familiar with the new characters introduced, which included performances by Barry Pepper, Lili Taylor and Patricia Clarkson. Instead, the question and introductions are quickly glazed over in favor of an action-packed finale and a not-so-surprising scene of betrayal that lacks the emotional punch Ball clearly was aiming for. Even when clocking in at 130 minutes, 'Maze Runner: The Scorch Trials' feels as though aspiring to do more than is possible in the allotted time, touching on some intriguing ideas that are not justly explored. Nevertheless, the film reveals a level of intelligence and elaborateness not seen in other productions of a similar vein. With enough action and visuals to entertain adults and teens in equal measure, this second installment in a planned trilogy is a strong complement to its predecessor, expanding on an imagined dystopic world where uninfected teens hold the key to humanity's survival and concludes on a footnote that nicely sets up a final showdown.

20th Century Fox Home Entertainment brings 'Maze Runner: The Scorch Trials' to Blu-ray as a two-disc combo pack with a flyer for a Digital HD Copy. The Region A locked, BD50 disc sits comfortably opposite a DVD-9 inside a blue, eco-cutout case with a glossy slipcover. Dubbed the "Ultimate Fan Edition," the package also includes promos for other books by James Dashner, special codes for the videogame version and an exclusive 24-page color comic book that should be read after watching the movie because it contains spoilers. A couple skippable trailers kick things off before switching to the standard menu screen with full-motion clips and music playing in the background.

The sci-fi sequel escapes the wicked clutches of mediocrity and makes its way to the Blu-ray promise land with a stunning, reference quality 1080p/AVC MPEG-4 encode. The apocalyptic wasteland hasn't looked this good since Max and Furiosa's treacherous road trip across the desert, filling the screen with a lush, warm color palette that perfectly captures the scorching hot climate.

Flesh tones appear healthy with natural, lifelike complexions in the faces of the diverse cast. Although the digital photography favors the trendy orange-teal look, primaries are sumptuous and brilliant throughout while earth tones and softer hues provide brilliance and warmth. Spot-on contrast allows for superb clarity and visibility of objects, mountaintops and collapsed buildings in the far distance, creating a great sense of vastness and catastrophe. Every thread and stitching in the clothing is distinct and sharply detailed, and individual lines, cracks and debris are discreetly defined in every scene. One can practically count each grain of sand in the desert and every pot mark along the walls of destroyed buildings and the large concrete blocks. Black levels are pitch-perfect and inky, providing the 2.40:1 image with an appreciable dimensionality and a film-like appeal.

The YA dystopian actioner scurries, races and hurries to safety with a demo worthy DTS-HD Master Audio soundtrack that splendidly generates a scorchingly thrilling and intensely effective environment that's consistent from start to finish. The rears are continuously active with a variety of atmospherics and subtle ambient effects, from the voices of characters echoing through open, empty spaces and debris falling in different areas to the thunderous clashes of an oncoming storm and helicopters flying overhead. Directionality creates a convincing, immersive soundfield as various panning effects flawlessly move from the front of the screen to the back and from one side of the room to the other.

The front soundstage is welcoming and expansive with more activity and movement between all three marvelously balanced channels. With outstanding fidelity and brightness, the mid-range displays precise clarity and definition, exhibiting superb separation between the mids and highs, delivering clean, detailed action sequences without falter or the slightest hint of distortion. Dialogue is clear and distinct in the center, even during the loudest segments. The low-end is powerful and accurately responsive with a few authoritative moments that provide the story some commanding weight and presence, making this an effectively exhilarating lossless mix.

Breaking free of the concrete-fortified glades, 'Maze Runner: The Scorch Trials' picks up immediately after the events of the first movie, making for a strong follow-up to its predecessor, weaving a larger web of complexity and intrigue that challenges its intended young adult audience. However, clocking in at just over two hours, the second installment in a planned trilogy also feels like two movies trapped and overstuffed into one as it leads up to a final showdown. Dubbed the "Ultimate Fan Edition," the two-disc Blu-ray arrives with a reference quality audio and video presentation that's sure to please fans. With a nice collection of bonus material, the package comes recommended.

Sale Price 8.9
List Price 14.99
Buy Now
3rd Party 8.9
In Stock.
See what people are saying about this story or others
See Comments in Forum
Previous Next
Pre-Orders
Tomorrow's latest releases