New York cab driver Korben Dallas didn’t mean to be a hero, but he just picked up the kind of fare that only comes along every five thousand years:  A perfect beauty, a perfect being, a perfect weapon. Together, they must save the world. Bruce Willis, Milla Jovovich, and Gary Oldman star in acclaimed director Luc Besson’s outrageous sci-fi adventure, an extravagantly styled tale of good against evil set in an unbelievable twenty-third century world. Now fully remastered in 4K, experience this dynamic action favorite like never before.

'The Fifth Element' is a movie best experienced rather than described, so I'll do my best to keep this short. In a universe where the celestial embodiment of pure evil threatens to destroy the world every 5,000 years, a friendly alien species has developed a weapon that combines four stones powered by the four forces of nature -- earth, wind, water, and fire -- and a special person -- the Fifth Element -- to stave off The End Times. But evil is cunning. Evil is ruthless. Evil has Gary Fucking Oldman on its payroll.

Set 300 or so years in the future, on the cusp of evil's return, the friendly aliens race towards Earth to save it once again, but are shot down by bad mercenary aliens (hired by Gary Oldman, who else?) which sets off a race between the human government, a secret order of priests sworn to protect the Fifth Element, and a various baddies set on collecting the missing stones. One side wants to save the world; the other destroy it. In the middle of this multi-POV pursuit we have ex-military officer Korben Dallas (Bruce Willis), a down on his luck New York City cab driver. One minute Korben's looking for his next fare; the next he's stuck on mission he doesn't want, and falling in love with the Fifth Element, who has taken on the human form of Milla Jovovich. Can humanity be saved in time? And, after centuries of brutal warfare, should it? 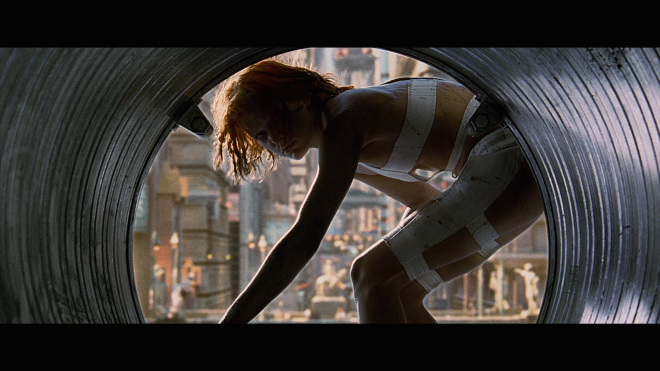 I can see how 'The Fifth Element' might not be a flick for everyone -- it blends together space opera genre tropes with wild tonal flourishes, a large cast of characters, and new age spirituality. It is, all in one breath, post-modern in a very '90s way and also one hundred percent sincere and earnest. Like a Baz Luhrmann movie, it requires a bit more of an audience buy-in than more tonally consistent productions. That said, if you do jump into writer/director Luc Besson's marvelously rendered world, it's a bit like watching a non-noir 'Blade Runner' set almost exclusively in the daytime with overt comedic elements.

I discovered 'The Fifth Element' purely by accident on Memorial Day Weekend in 1997. 'The Lost World: Jurassic Park' was in the process of crushing (for the time) box office records and was completely sold out. Instead my friends and I opted for 'The Fifth Element' and now, nearly twenty years later, we know which movie was actually worth the hype.

Revisiting this film on Blu-ray is great fun too. It's probably been a good five to ten years since my last watch, but I found its desperate tonal elements still create something unique and engaging. And, in the current era of mostly-digital productions, it's absolutely refreshing to watch an actual (shot on film) film. The movie's early CGI doesn't always hold up, but its many miniatures and practical special effects make most of the visual effects feel handmade and tangible. In other words, the film's world feels lived in.

The performances too are marvelous, from Bruce Willis doing a version of his worn out John McClain, to Milla Jovovich's child-like naiveté, to Chris Tucker's career-making turn as a futuristic radio celebrity. If that wasn't enough, we also get another classic over-the-top Gary Oldman's villain and Ian Holm as a bumbling priest. Everyone seems to be having a blast.

If 'The Fifth Element' isn't for you, that's totally cool, but during this re-watch I remembered why I adored this movie in college, and why I should watch it more often. It blends together an escapist genre adventure with a unique blend of tones in a package that is richly complex, but instantly accessible. 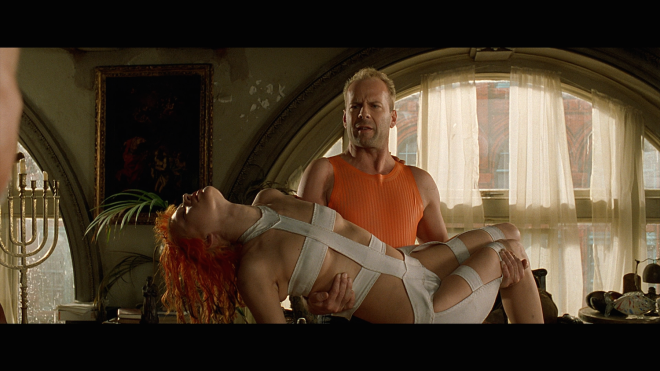 'The Fifth Element' returns to Blu-ray for the third time as part of Sony's Supreme Cinema Series. It boasts a new 4K master and an all new Dolby Atmos sound mix. Housed in a standard Blu-ray case, this Region A release includes a Digital HD Ultraviolet copy (expires 12/31/18) of the film and offers no forced trailers before the main menu.

If you prefer, there is also a Limited Collector's Edition, which adds in a special clear casing as well as booklet about the film's production.

Remastered in 4K for the Supreme Cinema Series, 'The Fifth Element' -- framed in its original 2.40:1 aspect ratio and encoded in MPEG-4 AVC -- offers an excellent video presentation that's probably about as good as this movie will ever look in HD.

Unfortunately, I didn't have any previous editions of 'The Fifth Element' on hand to do direct image comparisons. However, forum member Tnecniv, who provided the screen grabs for this review, posted images in Post #505 in this forum thread comparing this new version to the Gaumat release as well as the 2007 Sony remaster. It's important to note that screen grabs, no matter how accurate, do not fully capture the experience of watching images in motion. But, from what he presented, it appears this new release has a bit more of a yellow push to its color palette than some, but not all, previous releases. In other words, since I am not an expert in the history of this film's transfer, all I can do is rate the quality of the image provided, rather than its accuracy.

'The Fifth Element' offers a fantastic high definition presentation that is only a few steps shy of perfect thanks to some faint specs of dirt and debris that pop up from time to time. There's also some mild black-level crush as well as some dated CGI. Otherwise, this Blu-ray often feels like you're watching a film in a theatre. Detail and resolution feel endless, bringing to life the wild, futuristic sets and costumes. Skin tones are accurate (for the humans at least). Black levels are inky. And the colors, from a palette that ranges from mutated to highly saturated, are simply stunning.

For me, this Blu-ray was like traveling back in time to Memorial Day weekend, 1997, to rewatch the movie again for the first time.

'The Fifth Element' in Dolby Atmos (7.1 Dolby TrueHD compatible) is simply a revelation. Taking a more active approach to its Atmos design, Sony has taken a title that was already a go-to disc for surround enthusiasts and upped the game in almost every way. First, we have dialog; despite a plethora of different vocal tonalities, from Bruce Willis' monotone delivery to grunting aliens to Chris Tucker's rapid fire high pitched insanity, every single character comes out clear amidst an intricate mix. The sound design is also quite dynamic, juxtaposing loud, percussive action beats with smaller moments of humor. Regardless, this sound mix handles it all, and only improves at louder volumes, revealing more and more details. Surround panning is specific, engaging, and immersive. Lastly, LFE rumbles with space craft, explosions, sliding stones, and deep-voiced creatures. Bass was so demonstrative I even turned down the subs by a few dBs because I was literally rattling the walls of my living room.

In Atmos terms, to comment on the addition of height channels, I can't say enough how much I love what Sony is doing with the Supreme Cinema Series. This is the way catalog titles should be handled. In Atmos, the music may just be the most pervasive element to move up into the hight channels. I've long been a fan of Eric Serra's hypnotic, melodic, and pulsing score, but in Atmos it takes over the whole room, drawing viewers into Besson's detailed world and the emotions of every characters. Outside the music, those who purchase this disc will revel in the details, small and boom-tastic, that present themselves in the height channels. The film's opening sequence, which involves a landing spaceship and slamming stone door, set the stage well for a properly aggressive mix necessarily for such a genre-bending action adventure.

At the end of the day, 'The Fifth Element' has been reborn in Dolby Atmos with an immersive, aggressive mix that's better than many modern Atmos mixes (looking at you, 'American Sniper'). In terms of giving it a numerical rating, it's definitely top tier, but not quiet as dynamic as, say, 'Mad Max: Fury Road' or 'Gravity'. I'd personally give this mix a 4.8 stars if we had such a rating, which is why I've rounded up and checked the 5-star box. Cheers.

For the first time on Blu-ray, 'The Fifth Element' finally arrives with bonus materials, all of which appear to be in standard definition, having been ported over from the 2005 Ultimate Edition DVD. They are presented as follows:

I first saw 'The Fifth Element' purely by accident one Memorial Day weekend and have loved it ever since. With it's crazy combination of action, sci-fi, creatures, comedy, and simple-yet-sincere romance, it's a blast from beginning to end.

On Blu-ray, while I'm not an expert in the film's visual color timing history, I will say seeing this new 4K master was like stepping back in time, offering a wonderfully detailed and filmmic presentation that only suffers from the occasional bit of dust and outdated CGI. In other words, this is the best I haver seen 'The Fifth Element' look since its original theatrical run. Then there's the sound... This Dolby Atmos track is excellent, immersive, and hits all the right notes. And, for the first time in HD, Sony has brought over all the special features from the 2005 Deluxe Edition (Check this) DVD.

Were it not for the imminent debut of Ultra HD Blu-ray early next year, I would declare this title a Must Own for this film's fans and anyone with a Dolby Atmos system. If you're considering a first-round upgrade, then you might wish to hold off in hopes of this title being one of the first UHD BD's release. However, at less than $15, it might be worth it regardless. Highly Recommended.

Sale Price 8.99
List Price 14.99
Buy Now
3rd Party 6.34
In Stock.
See what people are saying about this story or others
See Comments in Forum
Previous Next
Pre-Orders
Tomorrow's latest releases