The winner of five Ariels (the Mexican Academy Awards), including Best Picture and Best Director, Gueros is one of the most striking debut features in recent memory.Ever since the National University strike broke out, Sombra (Tenoch Huerta) and Santos (Leonardo Ortizgris) have been living in angst-ridden limbo. Education-less, motionless, purposeless, and unsure of what the strike will bring, they begin to look for strange ways to kill time. But their idiosyncratic routine is interrupted by the unexpected arrival of Tomas (Sebastian Aguirre), Sombra's kid brother. Unable to fit in amongst these older slackers, Tomas discovers that unsung Mexican folk-rock hero Epigmenio Cruz (Alfonso Charpener) has been hospitalized somewhere in the city. Toma s convinces Sombra and Santos that they must track him down in order to pay their final respects. But what they thought would be a simple trip to find their childhood idol soon becomes a voy-age of self-discovery across Mexico City's invisible frontiers.

The coming of age story is one that has graced movie screens and television sets for generations. The setup to these stories isn't all that unique, the story usually centers around a young boy or girl who is on the cusp of entering their formative years and goes through a major life change of some sort that sees the main character grow up a bit earlier than they should have to. That is basically the framework for every coming of age story, the only difference being are the circumstances and how the storyteller tells their tale. Directed and written by Alonso Ruizpalacios and co-written by Gibrán Portela, 'Güeros' is a familiar coming of age story, but it's how this disjointed story is told that makes it unique and fascinating.

Tomás (Sebastián Aguirre) is more than a troubled young man. He acts up, gets into all sorts of trouble, and his mother can't handle the troubled youth any longer. With a wad of cash in his pocket, Tomás is sent to live with his brother, who calls himself Sombra (Tenoch Huerta) instead of his given name Federico. Sombra lives in Mexico City where life isn't exactly all that much more bright and prosperous for the young Tomás. Tomás soon learns that Sombra and his roommate pal Santos (Leonardo Ortizgris) have been wasting time aimlessly drifting around ever since a strike shut down the National University. For these two, Tomás' arrival is both a blessing and a curse, a blessing because they're going to be given cash every month from Tomás and Sombra's mother, but also a curse because now they have to care for a young boy they don't know what to do with.

When reading that Tomás and Sombra's favorite rock star Epigmenio Cruz (Alfonso Charpener) has been hospitalized at an undisclosed location somewhere in Mexico City, Tomás convinces Sombra and Santos to come with him to find their childhood idol. What starts out as a seemingly innocent to find the legendary musician quickly turns into an odyssey as the trio aimlessly wanders the wild streets of Mexico City. The path ahead of them only offers two choices, they can turn back and go back to living a wistful life or complete the journey. As they push forward each of them will be tested to find the strength that can only come from completing an intimate and personal journey of self-discovery filled with numerous chances at finding a purpose and happiness they would have otherwise missed. 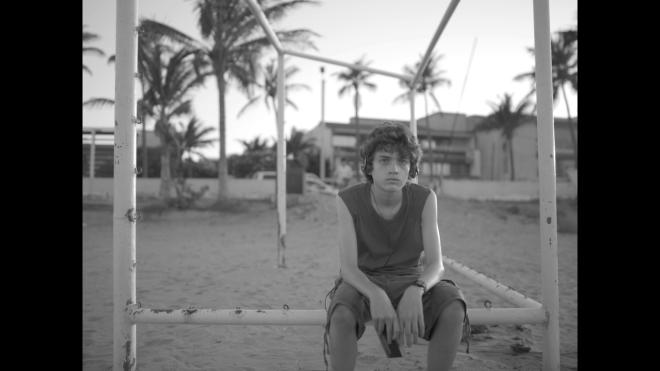 As one sits down to view the tried and true coming of age movie, there are a certain number of expectations that come built into the framework of the story. 'Güeros' certainly sticks to the outline of a prescribed storytelling mold, but film's chaotic and disjointed presentation filled with rapid-fire jump cuts and perspective changes keeps the film feeling new and fresh while never losing a sense of its central characters.

'Güeros' is certainly an intensely confusing film to watch. The frequent perspective cuts and sudden time jumps make the film feel wildly disjointed and abrasive. Then there is the often beautiful yet frenetic cinematography by Damián Garcia to add an extra layer of complexity to the film that would under normal circumstances put one off of finishing the movie at all. However, all of these blurring and disorienting elements come together to create a film that hypnotically magnetic. After the film's strikingly intense opening concludes and the film sets into its primary story, it becomes all the more difficult to take your eyes off the beautifully filmed black and white images. When you come to know the characters of Tomás, his brother Sombra, and their friend Santos, you want these three to succeed at something in life. You see in them an unfocused energy that just needs a little direction.

While the story idea of Tomás, Sombra, and Santos heading out into the wild world around them to meet their idol could be tossed aside as something trivial or expected of a story of this sort, it's nice to see that the quest the three go on isn't what is really important. The fact that these three people got off their backsides to actually go and accomplish something - even if they failed at it - is what is centrally important about this movie. So many people don't go after a dream or a goal because it seems insurmountable, so they don't even try. And by not trying that one moment, that fraction of a second that made the decision not to try becomes a lifetime's worth of regret and missed opportunities.

Going into 'Güeros' I didn't know what to expect. It was only a movie that I'd read small blurbs about after its successful festival circuit outings and then it drifted off my radar until the opportunity came along to review this Blu-ray release. I'm glad I went fore it. Usually, movies of this sort get on my nerves because they come off as being overly trite or too on the nose. Perhaps this story is a bit trite, but the energy behind the film and the deft care given to its characters is what keeps the film feeling alive and entertaining. For a first-time feature from director Alonso Ruizpalacios, I was very impressed. My hope now is that he's not a flameout talent that creates one great feature and never measures up to his first big success. This is a new talent that in my book is worth keeping an excited eye on.

'Güeros' arrives on Blu-ray thanks to Kino Lorber and is pressed onto a Region A locked BD50 disc. Housed in a standard case, the disc also comes with a booklet featuring a very interesting essay titled "Mexican Revolution" by filmmaker and critic Godfrey Cheshire. The disc opens directly to the film's static image main menu.

'Güeros' enjoys a beautiful black and white 1.33:1 1080p transfer. One of the aspects that I loved about watching this movie is the constant sense of movement and yet, there doesn't appear to be any sort of egregious camera blur or motion issues on screen. Detail is well defined at all times and highlights the ragged clothing the central characters wear as well as the intricate elements of Mexico City. The film's grayscale is picture perfect with deep and richly inky blacks, shadows, and whites that never appear overly contrasty or bloomed. Free of any sort of noticeable edge enhancement or other compression artifacts of note, this transfer provides a stunning image.

'Güeros' comes packed with a DTS-HD MA 5.1 as well as a 2.0 downmix. Of the two, the 5.1 track is the strongest and features the most audio life. However, both tracks suffer a bit of a level balance issue that is worth noting. Part of the hypnotic nature of the film is the frequent and unmotivated jump cuts and perspective shifts. Because of this storytelling tool, the audio jumps and shifts wildly from shot to shot. One shot could be nice and quiet, the next could be a parade of images and sound effects, and then it could cut back to being nice and quiet. Because of that, I frequently had to adjust my volume to compensate the volume ups and downs. Normally I wouldn't do this since it's part of the film's nature to be so jarring, but the audio shifts made it difficult to hear the dialogue in the next shot. The 5.1 mix handles the shifts a bit more cleanly since there is more channel space, but it's still a noticeable anomaly worth mentioning. To that end, when the film isn't bouncing all over the map, the dialogue comes through crystal clear and the track feels lively and real. There is a splendid sense of imaging as well as the surrounds are frequently engaged and provide a realistic sense of movement.

Deleted Scenes: (HD 12:04) A strong set of deleted scenes that expands some solid character moments and story elements, but at the same time isn't exactly missed from the main feature either.

Interview with the Director: (HD 14:04) Director Alonso Ruizpalacios talks about how the National University strike affected his generation and his education. It's fascinating to hear how this incident helped create his characters and give them a sense of perspective and place when they have no clear future ahead of them.

Cafe Paraiso Short Film: (SD 10:32) An interesting and dramatic short film from Director Alonso Ruizpalacios. A nice early work that showcases his ability behind the camera.

Trailer: (HD 2:09) A swift and smart trailer that does a great job of setting up the film and the adventure the characters undergo.

I found 'Güeros' to be an unexpected delight. I wasn't sure what I was getting into, so I took a leap of faith that it would be worth my time and effort, and I'm glad to say that it was. The film was a surprise, both visually, as well as how the story was told. I quickly found that I couldn't take my eyes off it for all of the best reasons. Kino Lorber has done a fantastic job bringing the film to Blu-ray featuring a strong A/V presentation as well as some worthwhile extra features. If you're looking for something new and interesting, give 'Güeros' a spin, easily recommended.

Sale Price 19.98
List Price 34.95
Buy Now
3rd Party 26.02
In Stock.
See what people are saying about this story or others
See Comments in Forum
Previous Next
Pre-Orders
Tomorrow's latest releases