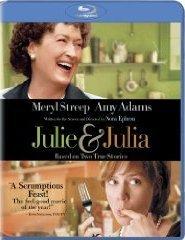 When I first heard Meryl Streep planned to take on the impossibly difficult challenge of playing the iconic Julia Child in a new movie, I thought the Oscar-winning actress might finally have met her match. I mean, really… No one, not even Streep, who has stunned us countless times with her talent, versatility, and limitless range, could portray someone so emblazoned in our collective consciousness as Child without turning this national culinary treasure into a caricature. Though I've been a huge Streep champion for more than 30 years – ever since her breakthrough performance in 'The Deer Hunter' back in 1978 – I felt Child's shoes (and frame and personality) were too large to fill, and predicted the actress would be lambasted for trying to impersonate her.

I should have known better. And, Meryl, if by any chance you're reading this, I apologize for doubting you. First of all, Streep doesn't impersonate people; she becomes them, and at times during 'Julie & Julia,' Nora Ephron's utterly delightful and delicious homage to Child and her lasting legacy, she embodies this literal giant of the cooking world so completely, you forget it's a performance. With an ease and joyousness that transcend almost anything she's done before, Streep captures not just the patented mannerisms and vocal timbre of Child, but her boundless and infectious enthusiasm, her passion for food, her commitment and drive, and the lovable heart that instantly endeared her to us four decades ago. Only Meryl Streep could do justice to this preeminent foodie, and if she's not rewarded with a record 16th Oscar nomination for her stellar work, I'll go on a hunger strike.

'Julie & Julia' is the story of two women and their love affair with butter. Well, not really, but butter plays a vital role in their lives, inspiring both of them to pursue a daunting task. And without a steadfast commitment to those decadent yellow pats of fat, neither would have a chance of achieving their respective goals. Julia, stationed in Paris with her diplomat husband, Paul (Stanley Tucci), in the years following World War II, decides to parlay her love of eating and desire for "something to do" into a career as a bona fide French chef. The only problem? The field is an iron-clad boys club, and infiltrating its chauvinistic ranks proves more challenging than Julia ever imagined. Another challenge is her dream of sharing her newfound expertise with American cooks (who have heretofore been slaves to pre-packaged, heavily processed foods) vis-à-vis the first French cookbook written in English.

Compiling the encyclopedic volume consumes years of her life, and years later, that encyclopedic volume consumes the imagination of Julie Powell (Amy Adams), a beleaguered public servant who counsels angry and depressed 9/11 survivors by day and escapes into the culinary arts by night. (Her bruschetta looks so yummy, I wanted to jump into the screen and grab a bite.) She's also an aspiring writer and devout Julia Child devotee, and makes a pledge to cook all 524 recipes in Child's Mastering the Art of French Cooking in 365 days and chronicle her experiences in a daily blog. The regime taxes her will, stamina, marriage, waistline, and, at times, intestinal fortitude, but she's determined to make good on her promise as well as honor her idol.

'Julie & Julia' tells these two stories in a parallel manner, and Ephron balances them well. The director's light touch and obvious affinity for gastronomy (remember, she wrote the bestselling novel 'Heartburn,' which focused heavily on food and was later made into a film starring Streep) make this a perfect project for her to, pardon the pun, sink her teeth into. All the dishes look delectable on screen – foodies will be in heaven – and almost every scene in which Streep appears engenders a broad smile. That's because Child possessed such a contagious sense of joie de vivre and Streep exquisitely channels it. (She also works so well with Tucci, whose subtle yet marvelously detailed portrait of the quiet, patient, supportive Paul Child is one of the movie's unsung highlights.) Adams supplies plenty of her trademark charm, too, as does Chris Messina as her patient husband, but Julie's narrative just isn't as interesting as Julia's, and her sputtering tale occasionally slows the film down.

'Julie & Julia' whets our appetite for some of Child's signature dishes – anyone who walks away from this film without a deep craving for boeuf bourguignon needs to have their stomach examined – but more importantly ingrains in us a deep appreciation for all that this trailblazing cook has contributed to our current culinary culture. Ephron's film and Streep's portrayal capture Child's spark and spirit, and for someone so unique and inspirational, that's no small feat. 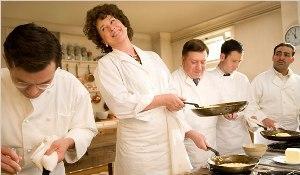 A pleasing transfer makes this film easy on the eyes. The 1080p/AVC MPEG-4 encode offers up a sharp, clear picture with a faint grain structure that nicely duplicates the theatrical experience. Ephron employs a slightly warmer palette for the Child sequences to distinguish the bygone period, while the modern-day Powell scenes look more stark and real. The differences, however, aren't strikingly distinct, so the film still possesses a comfortable, cohesive feel. Colors are vibrant but retain a natural glow, contrast is appropriately pitched, and fine details come through well. Strong black levels enhance night scenes, fleshtones stay stable and true, and though close-ups don't flaunt any real dimensionality, they're nevertheless well defined. Best of all, the gourmet dishes looks spectacular, with such marvelous hues and texture, they almost leap off the screen. (If only they really did!)

Digital enhancements are completely absent, the spotless source material exhibits no nicks, scratches, or stray marks, and no banding or digital noise muck up the works. This is a fine effort from Sony that will please cinephiles and foodies alike. 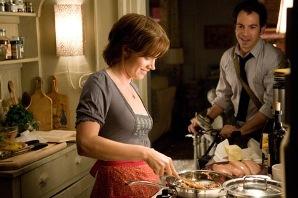 'Julie & Julia' comes equipped with a 5.1 DTS-HD Master Audio track that provides serviceable sound, but nothing spectacular. Of course, a film about cooking and blogging doesn't exactly brim with sonic possibilities, but the audio remains crisp and clear throughout, with easily understandable dialogue and a well-modulated music score distinguished by fine fidelity and a subtle surround presence. Effects such as knife chopping and sizzling butter possess a bit of pop, but ambient activity is surprisingly sparse, even during the exterior Parisian scenes, and there's no bass output to speak of.

All in all, this is a solid track that serves the film well, but won't tax your system. 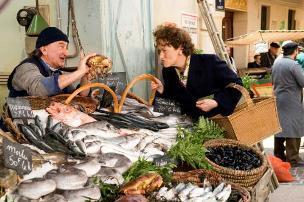 These are dietary supplements – thin on substance, but they go down easily enough. Meatier extras reside in the HD Bonus Content section below. 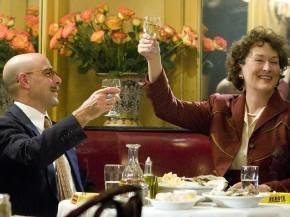 As light as one of Child's soufflés, 'Julie & Julia' is a delightful homage to food, perseverance, and dreams, and features another knockout performance from the grande dame of American cinema, Meryl Streep. Nora Ephron's film won't change the world, but it will get your stomach growling and just might inspire you to pick up a pound or two of butter on your next trip to the supermarket. Good quality video and audio and some nice supplements beef up this Blu-ray disc, but it's Streep's spot-on portrayal of Child that makes 'Julie & Julia' a truly delicious dish. Recommended.

Sale Price 15.87
List Price 18.9
Buy Now
3rd Party 29.99
In Stock.
See what people are saying about this story or others
See Comments in Forum
Previous Next
Pre-Orders
Tomorrow's latest releases