Fans of the cult 1988 comedy I’m Gonna Git You Sucka can go ahead and mark
their calendars for February 2016, the release date for the Blaxploitation
spoof on Blu-ray. The Airplane!-esque comedy was initially dumped in
theatres by MGM/United Artists around Christmas 1988, but the positive
response from audiences was undeniable, and the film received a wider
release the in January of 1989, and became a sleeper hit at the box office
and later, on home video.

I’m Gonna Git You Sucka satirized the Blaxploitation films of the 1970s,
and also cast many of the genre’s stars: Jim Brown, Bernie Casey, Isaac
Hayes and Antonio Fargas all have major roles, with a young Keenan Ivory
Wayans (who also co-wrote and directed the film) stars as a young military
vet who seeks to clean up his old neighbourhood from the scourge of fake
gold chains, which are leading to more and more “O.G.s” – deaths from
“over gold.” I’m Gonna Git You Sucka also features a cameo from a
then-unknown young comic named Chris Rock, who arguably steals the entire
movie in one scene.

"How come their guns are so much bigger than ours?"

Comedy is a tough nut to crack, and if making an audience laugh is hard, parody is even harder. Not only is the filmmaker trying to make an audience laugh, they're specifically trying to make them laugh at a reference point in the cultural mindset. Depending on the subject matter that's being skewered, sometimes this can work beautifully and prove to be hilarious. Other times, the particular subject being knocked down a peg by comedy can be so obscure that the audience just won't get it. 1988's 'I'm Gonna Git You Sucka' written and directed by Keenen Ivory Wayans sends up the 1970s Blaxploitation film genre. How funny you personally find this movie is going to depend entirely on how well versed you are with movies like 'Coffy,' 'Hammer,' and 'Shaft.'

Jack Spade (Keenen Ivory Wayans) is a soldier who has just returned home from the army to learn that his brother June Bug has died. His mother Ma Bell (Ja'net DuBois) and June Bug's widow Cheryl (Dawnn Lewis) are grief-stricken at their loss. June Bug was violently gunned down due to his terrible and debilitating addiction to gold chains. As many wondered how June Bug was even able to go to the bathroom with all that gear on, the bigger question on Jack's mind is how June Bug became addicted to gold chains in the first place? As it turns out, his investigation leads him to the big man, Mr. Big (John Vernon). If Jack has any hope of taking down Mr. Big, he's going to need help from local heros John Slade (Bernie Casey), Flyguy (Antonio Fargas), Kung Fu Joe (Steve James), Hammer (Isaac Hayes) and Slammer (Jim Brown).

When I was all of nine or ten years old, I discovered the hilarious sketch comedy show 'In Living Color' featuring the comedic talents of Keenen Ivory Wayans, his brother Damon Wayans, Jammie Foxx, and a then little-known comedian by the name of Jim Carrey. Every week I was a loyal viewer and on one particular night after an episode finished, 'I'm Gonna Git You Sucka' aired. While it was absolutely cut for television, 'I'm Gonna Git You Sucka' had me on the floor laughing, even if I didn't get 99% of the references I was seeing. I hadn't yet discovered movies like 'Cleopatra Jones,' or 'Blacula' so most of the jokes went over my head. I was digging on seeing Keenen and Damon and some of the other familiar faces from 'In Living Color' in a movie together. 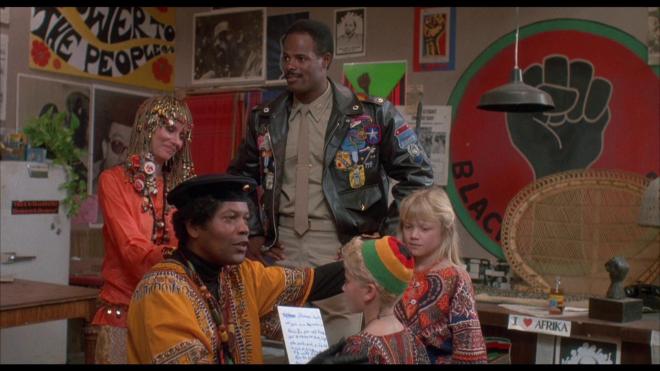 Years later, after expanding my film horizons on a steady diet of 1970s cinema, I finally get so many of the jokes in 'I'm Gonna Git You Sucka.' Being out of the loop for much of the film, a number of references didn't land on my first viewing of this flick way back when. Today, it was like watching an entirely different movie - in a good way! Going into a viewing of this movie again after so many years, I was worried that the nostalgia factor would upend my enjoyment of the movie. I had fond memories of loving it as a kid, so I was relieved that the movie is even funnier now that I actually get most of the jokes.

I love that Gold Chains and their impact on the youth of today is the setup for the film. It made me look back and remember the nutty stuff parents and teachers would get up in a huff about as a detrimental impact on kids growing up in my upper-crust suburban home town. Everything from the Simpsons and Beavis and Butthead to the type of shoes and even snap bracelets at one point were viewed with this watchful eye. Even 'In Living Color' came up at one point because of some strange misguided association to gangsta rap as a show that set a poor example for kids. Sure, watching Homie the Clown hit people with a sock may be a bit odd to some, but I still laugh just remembering Jim Carrey and Jamie Foxx's parody of 'Bram Stoker's Dracula' and I wonder how people could subscribe to such delusions without probably having seen a single episode of that show. Looking back on all of the hysteria some things caused during my younger years, I'm glad no teacher ever discovered the "Predator" or "Aliens" comic books I was reading as a kid!

'I'm Gonna Git You Sucka' was a wonderful rediscovery of my youth. The humor is just as sharp today as it was when I first saw it, and it stands as a solid reminder of how talented Keen Ivory Wayans and his stable of actors were. If you've never seen the film, pick it up. If you've seen it but don't remember it well or didn't get it when you first saw it years and years ago, go find it again!

'I'm Gonna Git You Sucka' makes its Blu-ray debut thanks to Kino Lorber and their Studio Classics line. Pressed onto a Region A locked BD25 disc, the disc comes housed in a standard Blu-ray case and opens directly to a static image main menu with standard navigation options.

The 1.85:1 1080p transfer provided for 'I'm Gonna Git You Sucka' does its job well, but for those hoping for a truly great HD experience, you may be a tad disappointed. Since I've only ever seen this film on broadcast TV from nearly 20 years ago, I don't have a frame of reference for a more recent comparison. Film grain is intact giving to some strong detail levels - particularly any close ups of costumes or gold chains as there are a number of visual jokes to be had in these moments. That said, there is a softness to the image that is noticeable as a lot of background details tend to fade away. Colors are bright and beautiful allowing for a strong primary presence without skewing flesh tones. The print sourced for this transfer is in decent shape, a bit of speckling and some debris crop up from time to time. The credits have a lot of jitter but aren't an issue once the main film starts up. Black levels are solid offering plenty of separation without any crush issues to speak of, but the image has a flatness to it at times that robs it of any sense of depth. It's a solid transfer but my guess is it was mastered from a dated source and not a very recent scan.

As a very front loaded comedy, the DTS-HD MA 2.0 audio track provided for 'I'm Gonna Git You Sucka' serves the movie well enough. Dialogue is the real star of the show as the actors deliver a number of deadpan jokes. Sound effects, music, and dialogue have a nice sense of space to them allowing for a crisp and clean listening experience. The music is also a dominating element - from the classic funk hits played throughout to the score by David Michael Frank really work to play up a lot of the referential humor of the film. Levels are spot on as the track keeps to the mid ranges, there aren't any notable spikes or drop-offs forcing you to adjust your volume any. This is a pretty average audio track, not amazing, but it gets the job done.

Making Of: (SD 5:35) This is your run of the mill EPK feature filled with routine interviews from the cast and crew.

Additional Interviews and B-Roll: (SD 4:35) This falls in with the previous extra feature as its mostly just extended comments that were cut. It would have been nice to have this material edited into the previous feature so there would be a bit more continuity in the comments.

I'm glad that I got to sit down and see 'I'm Gonna Git You Sucka' again. Over the years, I'd wanted to watch it, but was afraid that it wouldn't hold up to the experience of seeing it as a kid. Thankfully, the movie is even better than I remembered it, largely because I get so many of the jokes now! A pitch-perfect parody of one of my favorite film genres. Kino Lorber has brought 'I'm Gonna Git You Sucka' to Blu-ray in fine order with a standard but still very good A/V presentation and a couple of brief EPK extra features. Fans should be very happy to hear this Blu-ray release is recommended.