A couple travels to an old castle in France for the reading of the will of the woman's recently deceased wealthy uncle. It turns out that he left her his castle and its grounds. They turn down an offer by a local businessman to buy the castle, and not long after that strange things begin to happen, most of them directed at the young woman.

When you have a film that is working under certain niche genre conventions, there are a certain set of expectations that come with the package. A vampire horror movie needs to have plenty of bloodletting and perhaps a hideous-yet-handsome monster with a faux nondescript European accent. A zombie horror movie needs to have plenty of rotting undead corpses either running or lumbering after a band of still living and breathing fleshy humans. Giallo movies are a different game altogether. Giallo films merge sex, mystery, murder and torture to create a visceral and unsettling experience. Or at least, that's what they're supposed to do. Ferruccio Casapinta's 1969 film 'La Bambola di Satana' tries to bring together the proper elements of a giallo movie but somehow manages to screw up the recipe.

When Elizabeth (Erna Schurer) and her fiancé Jack (Roland Carey) inherit her late uncle's castle, the pair thinks this is the perfect opportunity for them and a pair of friends to have a calm and relaxing weekend - or so they think. As it turns out the castle's house keepers the mysterious Carol (Lucia Bomez) and the butler Eduardo (Manlio Salvatori) are less than keen on the idea of a couple of young whippersnappers coming up for the weekend, but since the will needs to be read, they'll have to put up with the distraction.

Once the will is read and Elizabeth learns she is the one and only heir to her late uncle's estate, she is besieged by offers to buy out the property. While she tries to learn more about the property and decide whether or not she even wants to sell, she's also being haunted by terrifying dreams. In these dreams, she's often stripped nude and taken deep into the depths of the castle to the old medieval dungeon. Or at least, she thinks these are dreams. When members of the party turn up missing or leave without saying goodbye, Elizabeth begins to wonder if something more sinister is at play. With her life at risk, she and Jack will have to solve the mystery before anyone else gets killed! 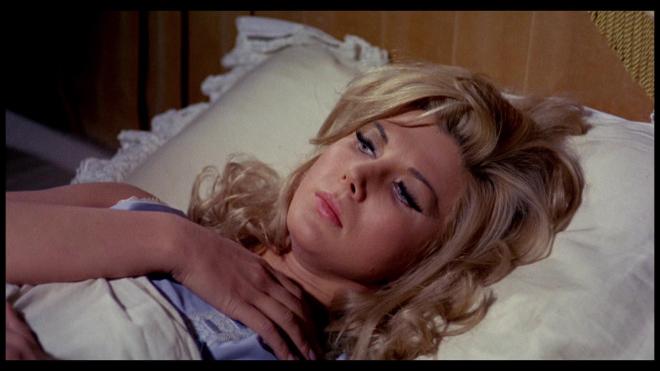 If you're starting to feel like 'La Bambola di Satana' is playing like a more adult episode of 'Scooby-Doo Where Are You?' you wouldn't be far off the mark. In fact, that is the general assessment of one of the quotes from K.H. Brown from Giallo Fever found on the artwork for this Blu-ray. When you read that quote there is understandably a bit of doubt that it really could be that simple, but once you get through the movie, you realize it is that simple. The only thing missing from this Scooby-Doo adventure is the Mystery Machine and a dog. So if you go into this film expecting a somewhat goofy cartoon adventure, you'll be on the right path towards enjoying this film.

Even as a cartoony horror picture, 'La Bambola di Satana' really isn't all that good - to be perfectly blunt about it. The film takes a really long time to get started, stumbles through clumsy passages of exposition, attempts to build suspense but fails to capitalize on any momentum. Just when you think the movie is going somewhere, just when you think the stakes are about to be raised, the characters sit down for a quiet conversation to discuss what just happened, as a result, the film constantly stalls out.

That isn't to say that 'La Bambola di Satana' isn't an enjoyable movie, it is, but in that so bad it's entertaining sort of way. Even as a bad movie, calling this film "good" or "entertaining" is still a stretch. There are so many long portions of the film where nothing of any relevance happens that once something interesting does occur, it's a bit too little too late to make up for all the boring parts - that is until the ending comes along. I don't think I've ever seen such inept stage fighting in a movie before, so if you find yourself laughing, don't feel ashamed to just let it out. Laughter is probably the best way to respond to most of what is on screen.

'La Bambola di Satana' arrives on Blu-ray thanks to Twilight Time and is limited to 3000 units. Pressed onto a Region Free BD25 disc, the disc is housed in a clear standard Blu-ray case and comes with a booklet featuring an essay from Julie Kirgo. The disc opens directly to a static-image main menu featuring traditional navigation options.

For a long time 'La Bambola di Satana' was feared lost so this 1.85:1 1080p transfer actually looks pretty great considering. Film grain, although somewhat inconsistent is present throughout and does provide for some pleasing detail levels. Unfortunately, details can blur out during some sequences without much warning. At first, I thought this was one of those techniques Italian filmmakers used to sidestep content censorship, but what is on screen during some of these moments isn't worth censoring so it's likely baked into the film elements used for this transfer. Black levels are also on the middle edge of things where one scene they can look deep and inky and then the next they're dull and grey suffering from noticeable contrast blooms. Colors look fantastic allowing primaries to leap off of the screen especially blues and reds. All around this is a pretty great image considering everything, but it does have its issues.

'La Bambola di Satana' comes with an Italian DTS-HD MA mono track with English subtitles. Given that this is an Italian production, a lot of the dialogue, sound effects and scoring have a bit of a flat and canned sound to them. Dialogue is clear and clean and easy to hear, sound effects are on the heavy side of things and only work to enhance the film's cartoony nature - even if that's an unintentional side effect. Levels are just fine as the audio keeps to the midranges without any spikes or drop-offs. Free of any hiss or pops, this is a clean track that works well for the film.

Audio Commentary: David Del Valle and Derek Botelho offer a somewhat fun and entertaining commentary for this film. They don't hold back about the film's lack of mystery, scares, suspense, or quality but they do manage to fill the track with some interesting tidbits.

Is 'La Bambola di Satana' a good movie? Nope, not really. As a horror film and especially as a giallo flick, the movie is laughably goofy, which makes it fun in its own way. Die hard giallo fans may be a bit disappointed by this one, but if you go in with your expectations in check, you should still enjoy the ride. Twilight Time has brought the film to Blu-ray in fine order featuring a decent image transfer, a strong original Italian audio track with a solid commentary track and an isolated score. I can't quite recommend this one but I'll say that 'La Bambola di Satana' is worth a look - even as an inadvertent piece of comedy.