Where the Sidewalk Ends

Det. Sgt. Mark Dixon wants to be something his old man wasn't: a guy on the right side of the law. But Dixon's vicious nature will get the better of him.

Six years after 'Laura' catapulted Gene Tierney, Dana Andrews, and director Otto Preminger to Hollywood's A List, the trio reunited for another film noir, ‘Where the Sidewalk Ends.’ Though both movies take place in New York City, deal with murder, and focus on a police detective's attraction to a beautiful woman, they're worlds apart in location, tone, style, and storyline. No ritzy Park Avenue penthouses, scintillating repartee, or ultra-sophisticated gentry grace Ben Hecht's taut screenplay. In ‘Where the Sidewalk Ends,’ Tierney and Andrews walk on the wild side, stealing tender moments in cramped, dingy apartments and rundown restaurants while reciting terse dialogue. Preminger infuses the film with a gritty toughness that matches the shady characters and underworld plot, and this time around more fully embraces noir's inimitable stylistic elements. The result is a tidy, tense, and totally satisfying thriller that's never quite gotten the recognition it deserves.

In ‘Laura,’ Andrews portrays Mark McPherson, a detective lieutenant with a chip on his shoulder; here, he's Mark Dixon, a detective sergeant with the same chip on his shoulder, as well as the same square jaw, piercing gaze, and bleeding heart. The similarities, however, end there. Dixon has finely honed his reputation as the 16th Precinct's resident loose cannon by systematically roughing up suspects and mouthing off to his superiors. Fed up with his behavior, Inspector Foley (Robert Simon) sternly admonishes Dixon and orders him to employ a kinder, gentler approach or risk a demotion to beat cop. Such pussycat tactics go against Dixon's grain, and while he's investigating the murder of a high roller at a floating crap game run by gangster Tommy Scalise (Gary Merrill), drunken suspect Kenneth Paine (Craig Stevens) slugs him. Instinctively, Dixon retaliates with a punch of his own, sending the man to the floor. And killing him.

For reasons revealed later, Dixon decides not to report the accidental death, choosing instead to dump the body in the river and pin the crime on Scalise, who's beaten a host of murder raps in the past. But when Dixon starts falling for Paine's widow (Tierney), and the police label her father (Tom Tully) the prime suspect, his deceitful game begins to spiral out of control.

At first, ‘Where the Sidewalk Ends’ seems like a standard gangland mystery, but the film takes a startling and tantalizing detour when Dixon throws his lethal right cross. Rarely does a noir cop find himself on the wrong side of the law, and it's fascinating to watch Dixon sweat out the consequences of his violent outburst. In an ironic twist, not only does he pursue the bad guys, he's one himself, and seeing him walk a moral tightrope while forging a hopeless romance with Tierney provides viewers with a rich and substantive cinematic experience.

In the half-dozen years since ‘Laura,’ Andrews matured as an actor and developed a serious drinking problem, and in ‘Where the Sidewalk Ends’ he uses both his talent and his vice to craft a strong, memorable portrayal. He looks weathered and beaten, and adopts a sour demeanor to hide an underlying sensitivity. Much of the film relies on his reaction shots and close-ups to convey myriad emotions, and Andrews admirably rises to the challenge, sucking us into his agonizing dilemma yet never losing our sympathy. Often dismissed as merely a virile, dependable leading man, Andrews proves here he's on a par with Bogart, Mitchum, Robert Ryan, and Richard Widmark as the quintessential noir actor.

Tierney is always a welcome and beautiful (make that gorgeous) presence, but Hecht's screenplay gives her little to do, except appear glamorous and dewy-eyed. None of Laura's mystique or duplicity creeps into the disenchanted wife she very adequately portrays. In fact, seldom has a noir film featured a more bland and uninvolved heroine. Trivia buffs, however, will get a kick out of one of Tierney's early scenes, in which her real-life husband at the time, fashion designer Oleg Cassini, makes a cameo appearance as — what else? — a fashion designer.

Stark locations, deep shadows, and the sparing use of music contribute to the harsh atmosphere Preminger creates. The director cleverly combines components of classic noir with the flavor of a new movement sweeping through Hollywood — realism — and the marriage works. ‘Where the Sidewalk Ends’ is a model of this new recombinant form, and proof that the success of ‘Laura’ was no fluke. Preminger, Tierney, and Andrews don't exactly go home again, but this darker side trip is definitely a journey worth taking. 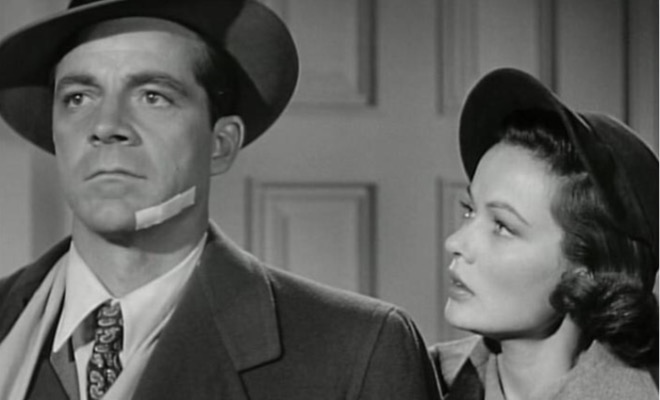 'Where the Sidewalk Ends' arrives on Blu-ray in a limited to 3,000 edition packaged in a standard case. An eight-page booklet featuring an essay by film historian Julie Kirgo, several black-and-white scene shots, and a full-color reproduction of the film's poster art is tucked inside the front cover. Video codec is 1080p/AVC MPEG-4 and audio is DTS-HD Master Audio 1.0. Once the disc is inserted into the player, the static menu without music immediately pops up; no preview or promos precede it.

The previous DVD of 'Where the Sidewalk Ends' boasted a high-quality transfer, but even that stellar effort couldn't prepare me for the breathtaking beauty of this eye-popping 1080p/AVC MPEG-4 rendering. From the moment the 20th Century-Fox logo flashes on the screen, the superior level of clarity and contrast is immediately evident, and it only mildly wavers for brief moments over the course of the film. Who needs color when black-and-white looks this good? A sea of inky blacks and marvelously varied grays combine to create an image that's both lush and dazzlingly crisp and dimensional. Grain is almost completely absent, yet the picture still looks amazingly film-like, and its pristine appearance, devoid of any nicks, marks, or scratches, is a joy to behold. Many scenes transpire at night or in dingy interiors, but top-notch shadow delineation keeps all the details discernible, while background elements, such as faded wallpaper, also show up well. Preminger employs several tight close-ups, showcasing Tierney's allure and Andrews' toughness and mental stress, and all are razor sharp and suitable for framing. Sure, the rear projection work is more noticeable because of the heightened clarity, but that's a small price to pay for such a perfectly restored picture. Film noir is such an artistic genre, it requires an exceptional image for one to fully appreciate it. This transfer meets - and exceeds - all the qualifications and brings 'Where the Sidewalk Ends' to life like never before.

Crisp, well-modulated, and free of such age-related imperfections as hiss, pops, and crackles, the DTS-HD Master Audio 1.0 track nicely complements the stunning picture quality. The ambient street noise of New York City subtly enhances the narrrative, while distinct accents like sirens, fisticuffs, gunfire, ringing phones, and distant trolley bells punctuate numerous scenes. All of Ben Hecht's snappy, terse dialogue is clear, well prioritized, and easy to comprehend, and the infrequent underscoring exhibits fine presence and tonal depth. Most of the audio is so tightly integrated into the film's fabric we rarely notice it, and that's just as it should be. Though far from flashy, this lossless track heightens the story's subtleties nd contributes to a surprisingly immersive experience.

• Audio Commentary - Film noir historian Eddie Muller sits down for a decent, but not spectacular, commentary that captures the film's flavor, but too often veers off track. Muller delivers his remarks in a tough, noir-like manner laced with plenty of colorful attitude, but he's a little too self-promoting for my taste, often relating his own novels to plot elements in 'Where the Sidewalk Ends' and encouraging us to buy his books. When he sticks to the topic at hand, however, he makes some cogent points, and obviously reveres the film. He cites 'Where the Sidewalk Ends' as one of the first examples of "bad cop noir," and praises Preminger and Hecht for creating both a suspense movie and character study - a rare combination. Muller also examines Preminger's style, expresses lukewarm feelings about Tierney, and lauds Andrews' performance. Noir aficionados can learn a lot from Muller, but I prefer some of his other commentaries over this one.

• Isolated Score Track - Though music is sparingly employed in 'Where the Sidewalk Ends,' the lush romantic theme that recurs throughout the picture ('Street Scene' by Alfred Newman), as well as some appropriate mood music by Cyril Mockridge, can be enjoyed without intruding dialogue and effects on this isolated track, presented in DTS-HD Master Audio 2.0.

• Theatrical Trailer (HD, 2 minutes) - A re-release preview of the film rounds out the extras package.

An underrated crime yarn distinguished by a clever story and an excellent performance by Dana Andrews, ‘Where the Sidewalk Ends’ may not be a major work from producer and director Otto Preminger, but it's tight, effective, engrossing, and brimming with stylish grit. The story of a troubled cop whose violent temper and checkered past put him on the wrong side of the law grabs us from the opening frames and keeps us transfixed, thanks to a sharp, focused screenplay by Ben Hecht, sterling direction from Preminger, and colorful portrayals by a top-notch cast. Twilight Time's Blu-ray presentation skimps on supplements, but features superior audio and a jaw-droppingly gorgeous video transfer that immerses us in the dingy grime of New York's underworld, as well as the gaping shadows and swirling smoke of classic film noir. 'Where the Sidewalk Ends' never seems to garner the laurels it deserves, but hopefully this terrific release will help fans of the genre rediscover it. Highly Recommended.