Glenn Ford co-stars as a tough, no-nonsense trail boss and Jack Lemmon as a tenderfoot Chicago hotel clerk whose yearning for the Old West outweighs his own physical limitations. As a result of Lemmon's participation in a 3,000 mile cattle drive, he discovers that the cowboy life is not as he'd imagined.

"No one wants to take a tenderfoot on the trail, it's too much responsibility."

I've probably said it a dozen times since I've started writing for High-Def Digest but it's worth saying again: I love a good western. I was brought up watching the exploits of Clint Eastwood and John Wayne. These men were the icons of the dusty trail and the six-shooter, and with my regular intake of these movies I didn't so much as watch them as absorb them like a dry sponge. One iconic actor of the western that I've never felt got enough love for his numerous contributions to the genre was Glenn Ford. While known for raising Clark Kent and starring in his fair share of noir gangster films, Ford would collaborate with Delmer Daves to create three amazing entries into the western genre, 1956's 'Jubal,' 1957's '3:10 To Yuma,' and 1958's 'Cowboy.' While it may be a bit lighter in tone, 'Cowboy' proves that Delmer Daves had a knack for telling personable dramatic stories using the old west as the perfect backdrop.

Frank Harris (Jack Lemmon) is tired of living a dull life as a clerk at a prestigious upper-crust Chicago Hotel. He's a man of ambition, means, and most of all - he's in love with the beautiful Maria (Anna Kashfi). Knowing that Maria's father Senor Vidal (Donald Randolph) would never allow his daughter to marry beneath her station, no matter how much she loves him, Frank has a plan to get into the cattle business to make some serious money and cement a place for himself and prove he's the right man for Maria's hand. The only hangup is he needs the right partner to invest in.

Long on the dusty trail driving cattle to market from Mexico to Chicago, Tom Reese and his crew are ready for a little revelry, and even a night at the opera! As it turns out Tom has a bit of a gambling streak and can hold his own at the card table, most times that is. After getting gutted at poker, Tom aims to clear out and get another herd onto the trail while his credit is still good. As Tom is settling his bill with Frank at the hotel desk, Frank sees the perfect opportunity, a man in need of some stake money to get a herd together, a partner. Only Tom doesn't like partners - even when they're willing to put up $3,800.00 in cash on the spot. Now that Frank is attached to his hip, Tom isn't going to make life easy for the greenhorn whose only previous experience with cattle was devouring a well-seasoned steak.

As Frank sees the reality of the life he only dreamed of, his soft and easy-going nature turns hard and sour. While Tom doesn't want a partner, he hates to see a good man go mean. The trail isn't for everyone and while Frank has turned into a formidable cattleman, Tom works the man to see that this life may not be for him after all. But as Tom tries to convince Frank of the facts, he's also left confronting his own bitter nature and how the trail has changed him over the years. Together the two men will learn that working cattle can make or break a man and if they're going to survive this drive they're going to have to learn to work with each other as equal partners. 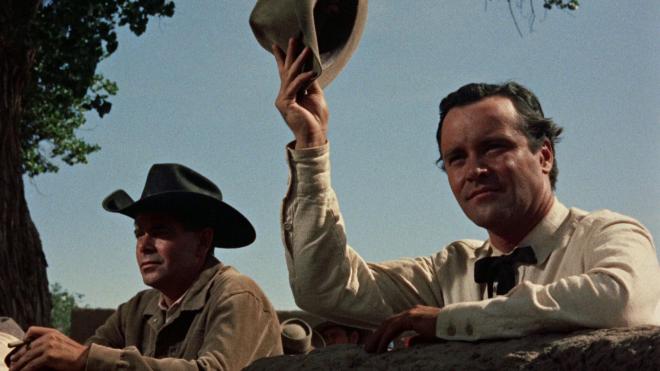 After the drama loaded 'Jubal' and the suspenseful '3:10 To Yuma,' it's nice to see Delmer Daves take on a softer more character-driven film. While the film manages to squeak in a few comedic light-hearted moments, the brooding character drama underneath is what brings 'Cowboy' home. Since he's largely known as a comedic actor, Jack Lemmon delivers a wonderfully nuanced performance as Frank Harris. He's a man who goes into this exciting life of a cattle drive blinded by the idea of love and gold at the rainbow, but when he gets to work he quickly learns it's nothing like he thought it would be. Without giving too much away, it's really something to see Lemmon go from sweet and innocent to surly, uncaring and outright mean. By contrast, Frank's decent gives light to Tom's own ways. By being a loaner who doesn't want partners and only wants to be a boss, Tom has put himself at a constant distance from ever truly knowing anyone. While his men may respect him, he wouldn't wade into a fight to save one of their necks - that's just the life of the trail. As Frank becomes a mirror image Tom sees for the first time the fallacies of how he's lived his life.

For those expecting some sort of rip-roaring Cowboys vs Indians yarn, 'Cowboy' isn't that sort of film. While there are some very good action and suspense moments that nicely tie this film back into Delmer Daves' previous effort on '3:10 To Yuma,' 'Cowboy' takes more of a character study beat from 'Jubal' while infusing the story with its own form of genre deconstruction. Yes, this movie is a western that takes place in the old west, but it's also a movie that could transport the same characters into a different time and a different livelihood and it would remain incredibly effective and personable. While I was a little worried this would be another comedic turn for Jack Lemmon, I was once again surprised and reminded by the late actor's incredible range as a dramatic presence. If you've yet to consider taking the time to give 'Cowboy' a viewing, now is as good a time as any. It absolutely rewards you for the time you put into it.

'Cowboy' arrives on Blu-ray thanks to Twilight Time in a limited run of 3,000 units. Pressed onto a Region Free BD50 disc and housed in a clear Blu-ray case, the disc opens directly to the main menu with standard navigation options. Also included is a booklet featuring stills as well as a great essay about the film by film historian Julie Kirgo.

'Cowboy' arrives with a beautiful 1.85:1 1080p transfer. Film grain is very apparent throughout, in some scenes it can appear a tad noisy, but it also gives the image a strong film-like quality allowing fine details to pop out of the screen nicely. Colors are bright and beautiful favoring dusty golden tones of the trail the men are driving their herd through. Primaries are bright and beautiful, in particular, reds and flesh tones are nice and even making sure each of the cowhands look like they've seen a lot of sunshine but not so much as to make them look too pink. Black levels are spot on providing some rich night shots that are free of any kind of crush issues while still maintaining a presence of depth to the image. The cattle stampede is an especially great looking moment as animals rush towards the foreground and dust and dirt is kicked up as the cowhands and Indians ride through the surge. Contrast levels are nice and even without any blooms. The print this transfer was sourced from appears to be in great shape with only some slight speckling during the opening credits animation, otherwise, this is a pretty spectacular transfer.

'Cowboy' is given a fantastic English DTS-HD MA 1.0 mono track. While all of the sound is front/center channel focused, there is a noticeable and impressive sense of space around the dialogue, sound effects, and the George Dunning score giving the track a very natural and authentic sounding presence. Dialogue is crisp and clear and never a struggle to hear. Even though this is only a mono presentation, there are some standout moments where directionality kicks in, especially during the stampede, giving these scenes a strong sense of movement. The track keeps to the midranges allowing the score to take up most of the higher registers while the heavy cattle hoof-falls add a heavy lower tone to the mix. Levels are just fine without any need to monitor volume. All around this is a pretty fantastic audio track.

Audio Commentary: Julie Kirgo, Paul Seydor, and Nick Redman provide a fine audio commentary track for this release. It largely covers anecdotal trivia about the film but it's still interesting and engaging material.

I love a good western, and man, 'Cowboy' proves to be a fine piece of filmmaking. Delmer Daves always had a unique touch with westerns and all of his best tendencies as a filmmaker are on display here. It's also great to see Glenn Ford and Jack Lemmon play off each other as the pair have fantastic chemistry together. Twilight Time made sure 'Cowboy' was given a solid debut on High Definition with this Blu-ray release. With a stellar image and beautiful audio track, a solid audio commentary and an isolated George Dunning score round out the otherwise slim extra features. 'Cowboy' is a recommended Blu-ray release.