An ambitious young executive chooses a loveless marriage and an unfulfilling personal life in exchange for a successful Wall Street career.

The name John O'Hara may not mean much today, but in the mid 20th century it helped define American literature. One of the most important - and popular - authors of his day, O'Hara churned out several acclaimed short stories and novels that provide a fascinating social history of America. Fran Lebowitz called him "the real F. Scott Fitzgerald," and though his difficult personality and inflated ego affected the quality of his later books, he remains a noteworthy literary figure.

Sadly, Hollywood butchered most of his works, emphasizing their sensational, racy aspects while gutting their thought-provoking themes. Most, like the horrendous 'Butterfield 8' (which even its star, Elizabeth Taylor, classified as “a piece of trash” at the time of its release), are nothing more than slick, tawdry soap operas devoid of substance. 'From the Terrace,' which is noteworthy only as one of 10 films that co-star the husband-and-wife team of Paul Newman and Joanne Woodward, also fits snugly into that dubious category.

In this case, however, O'Hara must shoulder a portion of the blame. The author reportedly contributed to the script (although he received no credit), probably in the hope of salvaging some of the novel's meat, but reducing an almost 900-page book to 144 minutes of screen time required exhaustive excisions. Only the juicy parts were spared, and even those had to be sanitized, thanks to the era’s overbearing censors. Sadly, O'Hara didn't wield enough power to save the subtleties or lighten the heavy-handed approach of producer and director Mark Robson, who labors mightily to duplicate the blockbuster success he had with a far inferior and twice as salacious potboiler, ‘Peyton Place.’

From the moment the film begins, it’s clear ‘From the Terrace’ will be a glossy, angst-ridden melodrama of the highest order, packed with family scandal, ponderous soul-searching, illicit romance, and a seething sexual undercurrent that still titillates today. As Alfred Eaton, the neglected, often spurned son of a heartless mill magnate (Leon Ames) and his unstable, alcoholic wife (Myrna Loy), Newman portrays the type of brooding, rebellious young man his late buddy James Dean personified, but does so with a petulant macho swagger that oozes sex appeal while masking an aching vulnerability and repressed sensitivity. Newman spends much of the movie sulking, just like his Brick does in ‘Cat on a Hot Tin Roof,’ but the dialogue here, written by the usually reliable Ernest Lehman, is far less incisive and meaningful than that of Tennessee Williams.

After a chilly homecoming from World War II, Alfred leaves the palatial family manor in Philadelphia and strikes out on his own, doggedly pursuing wealth and position in the hope of eventually one-upping his disdainful dad, who never got over the death of Alfred’s brother and has ignored and resented his surviving son ever since. At a party, Alfred meets Mary St. John (Woodward), an icy blonde socialite with a wild heart and headstrong attitude, and relentlessly woos her. They marry against the wishes of her stuffy family, but Alfred’s laser focus on his work leaves Mary feeling rejected, bored, and sexually unfulfilled. To retaliate, she brazenly rekindles an affair with her former beau, Dr. Jim Roper (Patrick O’Neal), which fractures her marriage and sends a lonely, disillusioned Alfred into the arms of wholesome country girl Natalie Benzinger (Ina Balin), the upstanding daughter of a business associate. Plenty of fireworks ensue as the messy liaisons play themselves out against a backdrop of corporate intrigue and marital strife.

Newman and Woodward possess electric chemistry, and their scenes together crackle with both sexual tension and a brittle air of mutual disdain. Casting them as battling marrieds who ceaselessly and often viciously bait each other, rather than dewy-eyed romantics who vow to preserve their love against all odds, goes against their persona as a devoted couple, but it’s an enticing and unexpected twist. And though their sniping may seem tepid compared to the barbs another legendary couple, Elizabeth Taylor and Richard Burton, hurl at each other in 'Who's Afraid of Virginia Woolf?' (produced a mere six years later), it’s potent enough to infuse an often dismal film with some much-needed spunk. ‘From the Terrace’ sorely lags whenever Newman and Woodward don’t share the screen, and sadly, that’s far too often.

Much of the movie’s dull second half centers on the syrupy relationship between Alfred and Natalie, who’s not nearly as captivating as her selfish, bitchy rival, who Woodward plays to the hilt. At times, she goes overboard, but who can blame her? The film's only source of amusement is Woodward spewing a constant stream of venom laced with an artificial air of propriety while decked out in a series of elegant outfits designed by Travilla, who often dressed Marilyn Monroe. By comparison, Natalie is a tiresome wallflower, and Balin’s doe-eyed, overly earnest portrayal only makes us like the wicked Mary even more. Myrna Loy chucks her perfect wife image and enjoys a couple of early histrionic scenes as Alfred’s deeply troubled mother, but she soon vanishes from the story never to return.

‘From the Terrace’ strives to depict the soul-crushing emptiness that comes from greed, materialism, and overbearing ambition and make an important statement about their cancerous nature, but this bloated tale of one man’s humanistic awakening loses its sting early on and becomes a lugubrious bore. Good performances keep the film afloat, but without the talented and magnetic Newman and Woodward, this slushy soap opera would sink like a stone. 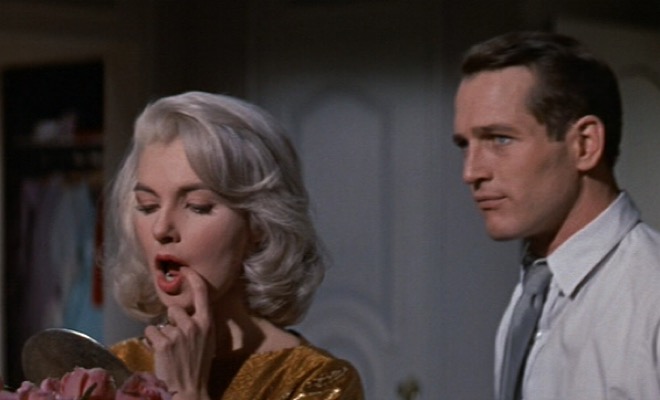 'From the Terrace' arrives on Blu-ray in a limited to 3,000 edition packaged in a standard case. An eight-page booklet featuring an essay by film historian Julie Kirgo, an array of photos, and a color reproduction of the movie's poster art is tucked inside the front cover. Video codec is 1080p/AVC MPEG-4 and audio is DTS-HD Master Audio 2.0. Once the disc is inserted into the player, the static menu without music immediately pops up; no previews or promos precede it.

Appropriately glossy and slick, the 1080p/AVC MPEG-4 transfer of 'From the Terrace' is as nice to look at as the film's two attractive leads. Minimal but noticeable grain lends the image an inviting lushness and a palpable film-like feel, and superior color saturation helps bold primaries and delicate pastels punch up the picture. (Rarely have Newman's piercing blue eyes been shown to better advantage.) Solid clarity and contrast enhance depth and background elements, while sharp close-ups allow us to drink in the beauty of Woodward, Newman, and Balin. Black levels are especially rich and deep, and because much of the film adopts a dark and gloomy tone, crush occasionally obscures fine details. Whites fare better; snowscapes look crisp and bright, as does one of Woodward's glamorous sequined gowns. Flesh tones err a bit toward the orange side, and Woodward's alabaster complexion at times seems a tad washed out, but such missteps are minor. Best of all, no nicks, scratches, or marks dot the pristine print and any digital enhancements have been judiciously applied. This is another excellent effort from Twilight Time that will surely delight classic movie fans.

The DTS-HD Master Audio 2.0 track supplies clear, well-modulated sound that fills the room with ease. Any age-related hiss, pops, and crackles have been meticulously erased, leaving a clean track that maximizes the impact of various subtleties, such as fountains, gentle breezes, and other ambient touches. Louder accents, like airplane engines, assert themselves well, yet a generous dynamic range prevents any distortion from creeping into the mix. Dialogue is well prioritized and easy to comprehend, and excellent fidelity and tonal depth distinguish Elmer Bernstein's dramatic and sometimes syrupy music score. Though far from dazzling, this standard track gets the job done without incident, which is about all we can ask of it.

Just a couple of supplements adorn this Blu-ray release.

Even the beauty and sexual electricity of a young Paul Newman and Joanne Woodward can’t salvage ‘From the Terrace,’ a sudsy peek into the empty lives of a bitter corporate ladder-climber and his unfaithful society wife. Mark Robson’s plodding adaptation of the John O’Hara bestseller takes itself way too seriously, and its cardboard characters never adopt enough dimension to merit our involvement. Twilight Time’s Blu-ray presentation skimps on supplements, but looks and sounds good, which is strangely fitting for such a shallow film. Sadly, only fans of Newman and Woodward will want to slog through this pompous, empty saga.