The early life of Woody Guthrie as a vagabond folk singer. 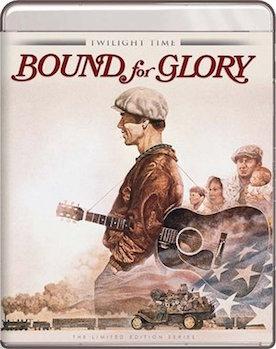 Back in 1976, the director of 'Harold and Maude' (Hal Ashby) told a a biopic story on film on Woody Guthrie, father of Arlo Guthrie. Even though Woody died at a relatively early age, he inspired the people of America during the Great Depression and WWII to question the political, social, and economical climate that was so volatile at the time. On his big cross country trek to  California, he made famous the iconic folk song 'This Land is Your Land, This Land is My Land', which people took to heart and allowed migrant farmers and homeless people strive for greener pastures, both literally and figuratively and to strive for better lives.

This little film garnered several big Oscar nominations, including Best Picture back in 1976 and won two of them, being Best Song and Best Cinematography by Haskell Wexler who used the newly invented steadicam, making this the first film to use the unique device that Stanley Kubrick made famous in 'The Shining'. Instead of telling a "by-the-number" biopic, Ashby mostly told the story of Woody Guthrie (David Carradine) and his wife Mary (Melinda Dillon) in their quest to California.

It doesn't really mess with his unfortunate upbringing or family life, but rather his goal to start a revolution with music across the country and not really focus on his political or social agendas. Most of the film is Woody traveling by train or hitchhiking across country and coming into contact with some bizarre and strange people of all walks of life. It's here where Ashby wanted to show us just how charming and easy going Woody could be. Woody had a way with connecting with people, and this film shows that quite nicely, even when he comes across the rudest of people.

Through the hardships, obstacles, and difficulties that Woody endured during this time, he always broke through whatever barrier he was facing head on and created amazing folk music. Towards the latter part of the film, things switch gears to his music career and into the famous song that capture a nation and all its people, 'This Land is Your Land, This Land is My Land'. Everyone turns in a great performance here, where each actor makes an effort to connect with each other as well as the audience.

There is never any over-the-top dialogue or over-acting here, but rather a simple and realistic approach that makes you want to befriend most of these characters, even with their flaws. The film itself looks beautiful with the use of steadicam and the great wide open country, making 'Bound For Glory' one of the better biopics done on a musician.

'Bound for Glory' comes with a 50GB Blu-ray Disc that is Region A locked from Twilight Time, and is limited to 3,000 copies. So get them while they're available. The disc is housed in a clear hard plastic case with reversible box art. There is a fully illustrated booklet with images and an essay by Julie Kirgo.

'Bound for Glory' comes with a dull and uninspiring 1080p HD transfer and is presented in 1.85:1 aspect ratio. This video presentation needs a lot of work. I think the master that Twilight Time used here, which was from MGM, was not the best one they could have used. There is quite a bit of dirt and debris throughout the picture along with speckling and a ton of scratches. It's very noticeable from start to finish.

The detail is always soft too and somewhat murky. The dusty and smoky ambience here too never makes things easier on the eyes either. It's a dull looking picture for sure, and it shouldn't be, given the beautiful locations. Nothing is ever vivid or sharp, even in the closeups, but it all rather looks quite flat and murky. There are a few shots that look better than others, when in the bright light of the day in exterior shots, but other than that, you can expect a soft image with a rather heavy layer of grain throughout.

Colors never pop either. They are rather vague and gloomy most of the time, which is unfortunate, because there are a lot of clear blue skies and green trees to look at here. Black levels are never as deep as they should be and the skin tones look a little earthy. This is a beautiful film, and it's a shame that this video presentation doesn't allow it to shine like it should. 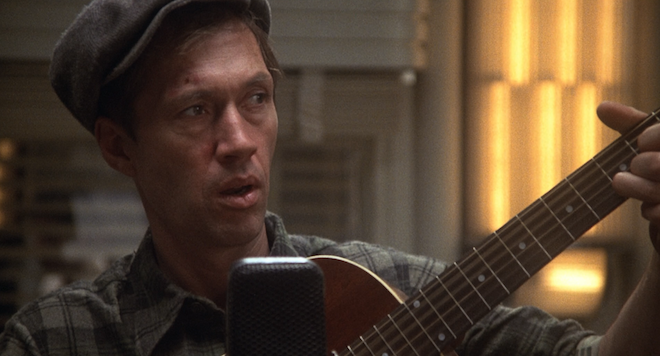 This release comes with a DTS-HD MA Mono mix and does a good job of capturing the music and score (which took home the Oscar), as well as the sound effects and dialogue. I only wish there was a 5.1 option to fully immerse yourself in. The dialogue is always clear and easy to follow along without any pops, cracks, or hiss.

The music scenes and score sound great, allowing for each chord of music to flow nicely. Everything is well-balanced here. The ambient noises and sound effects are never overly-loud, but rather perfectly mixed to give a decent and elegant sound. There really aren't any explosions or big action scenes here, so don't expect a truly loud experience, but rather a nice musical film.

Isolated Score Track - You can listen to the music-only track here in DTS-HD MA 2.0 stereo. 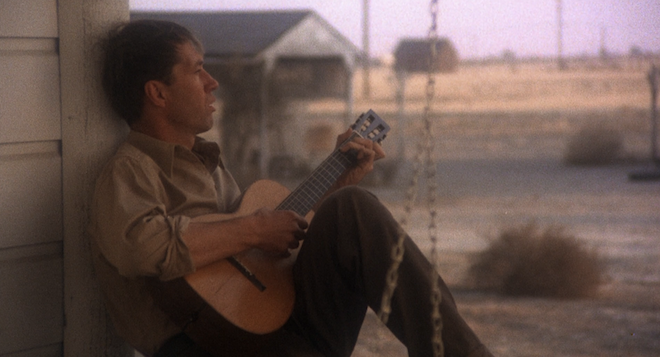 'Bound for Glory' is an amazing and beautiful film about a certain time in Woody Guthrie's life that inspired the nation. The music is fantastic, the acting top notch, and the scenery and filmmaking are award worthy. In fact, it won Oscars, back in 1976. This was the first film to use the steadicam, which is a huge milestone in filmmaking, and each tracking shot is more beautiful than the last. This film still stands the test of time. Unfortunately, I wish there was a better video presentation here, because the cinematography and scenery is incredible. The audio portion is quite nice though, but there are no extras that revolve around any behind the scenes, commentaries, or discussions, which is upsetting. Still, this biopic comes Recommended, despite the flaws with this release.