Two Navy men are ordered to bring a young offender to prison but decide to show him one last good time along the way.

Movies that celebrate the human spirit are about as common as the family melodrama. Usually, these movies are about someone in a precarious position who overcomes wild obstacles in order to achieve a goal. Every now and again a genuine film comes along and actually chooses to celebrate the little everyday joys that are often taken for granted. Hal Ashby's 'The Last Detail' starring Jack Nicholson, Otis Young, and Randy Quade is a genuinely heart-warming film about a young sailor on his way to the brig and the two officers assigned to escort him and their quest to ensure the kid has the time of his life.

Serving in the Navy is supposed to be an adventure, not a job. For Billy "Badass" Buddusky, it's a job. As a signalman, Buddusky spends most of his time trying not be found by his commanding officer M.A.A. (Clifton James) to take on a crap detail. When M.A.A. gets a detail for Buddusky, Buddusky is less than thrilled to learn he's got an assignment - that is until he hears the finer details of the deal. Buddusky, along with Richard "Mule" Mulhall (Otis Young) is tasked with transporting Seaman Laurence Meadows (Randy Quaid) to the brig. Buddusky and Mulhall, at first, are delighted to have a week to do a job that only takes two days and enough per diem cash to live it up on the way back home, but the initial excitement is shortlived.

The plan to have the time of their life goes sideways when Buddusky and Mulhall meet Meadows. The tall lumbering guy is just a kid, still in his teens and hasn't really lived a day in his life. When Buddusky learns the kid is getting put away for eight years for petty theft, he does what he can to pick the kid up and make him feel better about his dire situation. What starts out as getting the kid his first beer turns into a journey of self-discovery, not only for Meadows but for the jaded lifers Buddusky and Mulhall as they see there is more to the world than their daily grind.

'The Last Detail' is a bittersweet movie. It serves as a reminder that there are bad days and good days, and a lot of the time those bad days outnumber the good. But rather than dwelling on the sad situation Meadows is in and the depressing position Buddusky and Mulhall find themselves in having to escort the kid to his prison sentence, the film instead celebrates the small pleasures the men take in during their journey. 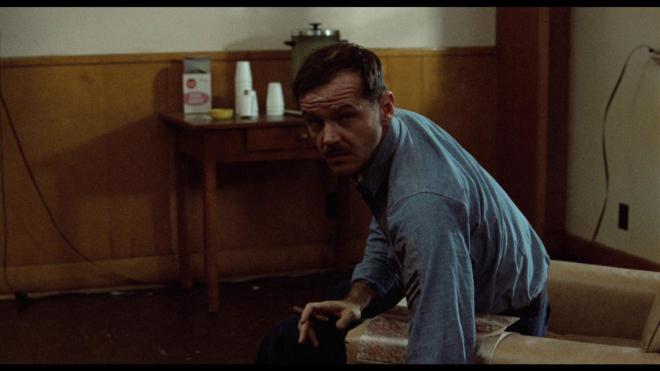 At the center of 'The Last Detail' are three fantastic performances from Jack Nicholson, Otis Young, and Randy Quaid. It's easy to see how and why Nicholson and Quade earned their respective nominations considering the amount of energy and emotion they put into their roles, but it's also a shame to see that Otis Young wasn't nominated alongside them. Without him as a sort of moral compass, a reminder of real world responsibilities, 'The Last Detail' would have ended up being your run-of-the-mill wild and crazy road trip movie without any character nuance. Together, these three actors form a dream team of talent and make the film a wonderful watch.

Hal Ashby is one of those filmmakers that we just didn't get enough from. As just his third feature film after 'The Landlord' and the wonderful 'Harold and Maude,' Ashby is in perfect form with 'The Last Detail.' Working from a script by 'Chinatown' writer Robert Towne from the novel by Darryl Ponicsan, Ashby allows the characters to breathe and be authentic humans with intricate complexities without forcing a message or an agenda. The film feels like a special reminder that no matter what our circumstances are, we should take the time to appreciate the little things, like a beer, an Italian sausage sandwich, or making sure your eggs are made just the way you want them. As a big fan of Harold and Maude, I've slowly worked my way through Hal Ashby's catalogue of movies. While not all of them are decisive winners, I love that he always worked little nuggets into his movies that suggest that life, in general, is to be celebrated and to enjoy the good things you have to take on a little of the bad.

'The Last Detail' arrives on Blu-ray thanks to Twilight Time and is limited to a run of 3,000 units. Pressed onto a Region Free BD50 disc and housed in a standard clear Blu-ray case, the disc opens directly to the main menu offering traditional navigation options. Also included with the disc is a booklet featuring stills from the film and an essay by Julie Kirgo.

With a 1.85:1 aspect ratio, this 1080p presentation of 'The Last Detail' is pretty fantastic considering the age of the film as well as Hal Ashby's signature no-frills shooting style. The print appears clean with only slight speckling throughout. Fine film grain is retained providing the image a fantastic amount of detail to see and appreciate. Colors are on the cool side, maintaining the film's fall/winter setting. As a result, primaries don't really ever pop off the screen. Reds skew a bit more crimson, blues also appear a bit lighter and yellows are paler. Flesh tones appear accurate overall, not too sickly or too pink. Black levels are strong and inky and give the image a nice sense of depth to it, however, there are a couple instances of crush - especially a night - when the black dress coats Meadows, Buddusky and Mulhall wear blend into the background making them appear as floating heads. All around this is a pretty good looking image maintaining a very film-like presentation.

With a DTS-HD MA 1.0 mono track, 'The Last Detail' retains a sense of the original theatrical presentation of the film. Even as just a mono track there is a great sense of space and atmosphere throughout, this is especially present in scenes like the trains they ride, or the bus station sets where there is a lot of background sounds going on. Imaging is present but subdued since there isn't the possibility for any channel movement, but that doesn't keep this track from maintaining a sense of directionality. Dialogue is crisp and clear throughout and is never an issue to hear. Levels are well maintained as most of the track keeps to the midranges, there really isn't any big leaps in action or intensity to the film that requires any volume monitoring. Without any age-related issues, the track is free of hiss, pops, or breaks.

'The Last Detail' is just a great movie from beginning to end. As a drama and a comedy, the film works to remind the audience that even on a bad day, there are great joys to be had - even if they're simple pleasures. Twilight Time has brought this Hal Asby directed classic to Blu-ray with a fine A/V presentation. Extra features are very skimpy with the only feature of note is the isolated score track. Even with the slim extras, I'm calling this Blu-ray release of 'The Last Detail' Recommended - the movie alone is worth it.