Diary of a Lost Girl

Part of the joy of watching a silent era film is the fact that the finished works even exists at all. It's fascinating to watch how actors play their parts. It's amazing to see how films were edited and paced to evoke an emotion when the only sound available would be whatever music was being played at any given screening. What I've always loved is how so many of these films have remained as archives of societal conventions of the time period. When one watches the Louise Brooks starring 'Diary of a Lost Girl' directed by the legendary Georg Wilhelm Pabst, it's easy to be enamored at the shocking sights and then judge it as a product of a time, but to do that one would fail to see the parallels to today.

Young, beautiful, and naive Thymian (Louise Brooks) lives a good life amongst society's upper crust. Her father Robert (Josef Rovernsky) is a successful pharmacist and is seen as an esteemed gentleman within the community. In order to help him run one of his shops, he's hired the dashing Meinert (Fritz Rasp). It isn't long before Meinert has taken notice of Thymian's beauty and likewise Thymian is enraptured by Meinert's cool eyes and alluring smile. It doesn't take long before Meinert seduces the young woman.

While Thymian is losing her innocence, her father Robert has taken quite the eye to a young and beautiful yet deceitful house maid named Meta (Franziska Kinz). As the woman worms her way towards Robert, it isn't long before the man falls for her feminine wilds and is blindly head over heels for the woman and ready to propose marriage to her. As Robert is following his own heart, he is hit with the news of Thymian and Meinert's liaison has resulted in the young girl becoming pregnant.

Robert demands that young Thymian live up to her honorable name and do the right thing by marrying Meinert. Thymian refuses. By breaking with the expected social conventions, Thymian is punished by being sent to a strict and cruel reform school where the masters derive an almost fanatical pleasure by torturing the young women under their care. As the routine physical exercises become more and more difficult to endure and the psychological hardships begin to mount, Thymian runs away and finds herself living at a brother where she learns the hardest of life's lessons that everything has a price, however, she also learns that she has control over her destiny. 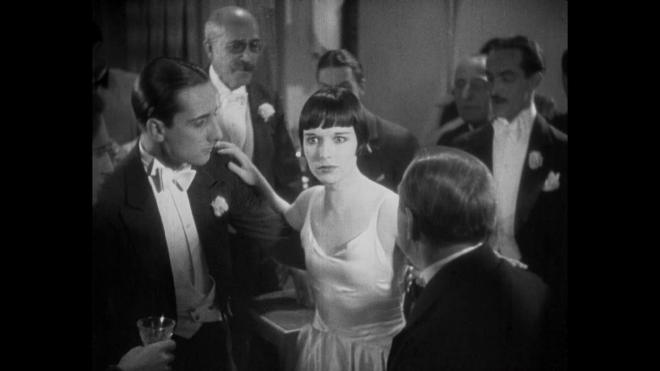 'Diary of a Lost Girl' is a beautiful yet horrifying film. As I was watching it, I couldn't shake the feeling that I was watching a more visually straightforward and yet just as psychologically horrifying companion film to 'The Cabinet of Dr. Caligari.' This is hardly a happy film, to say the least, nor is it one that you're likely to forget for just that reason. Watching Louise Brooks in this film is like watching an innocent young woman being stripped of all of her dignity and self-respect and then have to pull what's left of herself back together again and G.W. Pabst was able to capture everything in each incredible camera setup.

As a look at societal conventions and contradictions, 'Diary of a Lost Girl' is understandably sharp. Why is it wrong for a woman to reject a relationship and yet it's okay for her father to woo a woman that is easily half his age or younger? How is it that Meinert gets to walk away from effectively raping a young girl and still profit from the experience? While the film was apparently heavily censored and several scenes including the ending were reshot, the film still has sharp teeth and plenty of bite. Where it would be easy to dismiss some of these events as part of a bygone era and no longer relevant, it's important to take a look around the world of today and see that the lessons are just as applicable.

Watching 'Diary of a Lost Girl' was like watching someone else's bad dream. It's a film that helps you take stock of your current situation in life and make you thank whatever higher power you subscribe to (if one at all) that you're not in a similar situation yourself. Louise Brooks was a signature presence in films of the 1920s and 1930s and her immense talent and physical beauty are in full force with this film. "Diary of a Lost Girl' is a haunting work of filmmaking that I am very glad to see has made its way to Blu-ray in fine form.

'Diary of a Lost Girl' arrives on Blu-ray thanks to Kino Lorber and is pressed onto Region A locked BD25 disc. Housed in a standard case, there is alternate reversible cover artwork featuring the film's original German poster artwork. The disc opens directly to the film's main menu.

'Diary of a Lost Girl' arrives on Blu-ray stateside with a strong and beautifully interesting 1.33:1 1080p transfer. I say "interesting" because there is an odd effect on display whenever Louise Brooks is featured in close up; it would appear that the frame has been elongated ever so slightly to make her face appear thinner - although the actual width of the frame doesn't appear to change. It's a subtle and intermittent effect so I can't be entirely sure if this is actually part of the film itself or a result of some tinkering. When this release was announced for a North American release, I read that this transfer was being sourced from the same 2k restoration scan that was used for the European release, however, I don't have a copy of that disc for comparison so I can't confirm it to be a unique aspect of this particular transfer or one inherent to the surviving film elements. Normally I wouldn't even think to bring something like that up, but once you notice it, it's hard not to stop seeing it every time it happens. To that end, the rest of the film looks impressive and beautiful. Sure there are quite a few age-related issues along the lines of some speckling and a few scratches here and there, but detail levels never falter. You can clearly see fine facial features and some of the more complicated set pieces look amazing, or terrifying if you're watching a scene that takes place at the reform school. The film's Black and White grayscale is practically perfect with blacks looking rich and inky. All around this is a fantastic looking release.

'Diary of a Lost Girl' arrives with a strong and beautiful score by Javier Perez de Azpeitia presented as a music-only track in LPCM 2.0. The music fits each scene of the film perfectly and I have to tip my had to Kino for using a score that was specifically designed for this film rather than using some recordings of public domain compositions like so many silent films get stuck with. I know, that is a practice Kino wouldn't stoop to, but it's something I thought worth mentioning. The title cards are presented in their original German, so if you're fluent, you're all set. If you're like me and only have a thin grasp of some very rusty German, there are some solid English translation subtitles available.

Audio Commentary: Director of the Louise Brooks Society, Thomas Gladysz provides an interesting look at the film, discussing the style of the film, it's reception as well as some of the production details that are known about the film. A solid listen, especially if you're at all interested in learning more about Brooks herself.

Windy Riley Goes Hollywood (1931): (HD 20:02) This is an entertaining short film that was directed by Fatty Arbuckle and based on a story by Ken Kling. It also just so happens to star Louise Brooks.

Promotional Trailer 2015: Your standard restoration trailer, it's more of an advertisement that the film has been cleaned up than a promotion of the film itself or the story.

'Diary of a Lost Girl' is an impressive work. It's a frightening morality play that grabs your attention, and even all these years later, it proves to be quite shocking at times and features some impressive performances, in particular from lead actress Louise Brooks. Kino Lorber has done a pretty great job bringing this restored silent film to Blu-ray with a beautiful transfer and a fine accompanying score. The audio commentary is certainly worth a listen and the short film from Fatty Arbuckle is something to enjoy. If you love classic works, 'Diary of a Lost Girl' is recommended.

Sale Price 19.89
List Price 29.95
Buy Now
3rd Party 19.88
In Stock.
See what people are saying about this story or others
See Comments in Forum
Previous Next
Pre-Orders
Tomorrow's latest releases