Overview - Anderson’s follow up to Boogie Nights was called “one of the best movies of the year” by Rolling Stone’s Peter Travers and was nominated for three Academy Awards®-- Best Supporting Actor (Tom Cruise in an amazing performance as a sleazy infomercial host); Best Original Song (Save Me by Aimee Mann) and an Original Screenplay nomination for Anderson. The film takes place in a single day in Los Angeles, focusing on a number of interconnected people whose lives are forever changed as they search for love and meaning in a chaotic world. The film chronicles such diverse occurrences as a suicide turned homicide by a quirk of timing; a motivational speaker motivated by rage; and a quiz kid rendered stupid by a lightning strike. Besides Cruise, look for more great acting from Philip Seymour Hoffman, William H. Macy, Jason Robards, Philip Baker Hall and Julianne Moore.
OVERALL
Highly Recommended

After the critical and commercial success of his sophomore film 'Boogie Nights,' every actor in Hollywood wanted to work with writer-director Paul Thomas Anderson, and every studio wanted to produce his next film. He had a blank check in Hollywood. He knew the rarity of this situation and how precious this moment was. So he spent that blank check. And called it 'Magnolia.'

Part of the class of 1999's amazing film collection (which I wrote about previously in my review of David Fincher's nihilistic thriller 'Fight Club'), 'Magnolia' is an intimate epic. Robert Altman is clearly one of Anderson's touchstones (as evidenced in 'Boogie Nights'), and here he makes an Altman homage that's crazy to the nth degree (he goes as far as to cast a few noted Altman collaborators in major roles). There are a ton of characters, each with their own motivations and elaborate sub-plots and back-stories, all interconnected in interesting ways. It's not a disparate collection of short stories, either, but one cohesive-ish whole.

Let me try and run it down as economically as possible. There's officer Jim Kurring (John C. Reilly), a police officer who addresses the camera in a faux 'Cops' fashion and who is, more than anything else, looking for love. He is having a crummy day, which begins when he loses his gun. Still, things get better when he's called to the home of Claudia Wilson Gator (Melora Walters) after her neighbors complain of excessive noise. The two decide to go on a date together. Claudia Wilson Gator is the damaged daughter of quiz show host Jimmy Gator (Philip Baker Hall), who is dying of cancer but still hosting his popular show, which pits kids against adults in a battle of wits. One of those kids is Stanley Spector (Jeremy Blackman), whose father doesn’t care about him much. Donnie Smith (William H. Macy) is a former contestant on the game show but who is now a fumbling lovelorn dweeb. Then there's Frank TJ Mackey (Tom Cruise), a self-help guru whose patented method, Seduce and Destroy, teaches other dweebs how turn women into sex slaves. Frank's father, Earl Partridge (Jason Robards) is dying of cancer too. Earl, in a last ditch effort at closure, has his nurse Phil Parma (Philip Seymour Hoffman), track Frank down (Frank doesn't know who his father is). Earl's wife, Linda Partridge (Julianne Moore), is a mess – addicted to pills and racked by guilt for her infidelities.

Now, how do all these strands intersect? Well, you'll just have to watch the movie to find out. Much has been written about the final hurrah, a biblical convergence which some find incredibly clever and others consider incredibly dumb (it's probably somewhere in between), but what's so great about that moment is that it's perfectly in keeping with the rest of the film. It's a big movie (not only cast wise – it clocks in with a running time of over three hours), with big emotions and big gestures and this is really the only way to keep with that.

How has 'Magnolia' aged in the ten years since its release? Fairly well, actually. The problems that were there in the first place are still there (it's too long and it's too emotionally frenzied) but all those things that dazzled you the first time around are still just as amazing. Mostly, it's Paul Thomas Anderson's audacity, his "throw everything at the wall and see what sticks" mentality that is evident in his later films, the romantic comedy 'Punch-drunk Love' and American masterpiece 'There Will Be Blood.' Also, there are those performances.

Between all the actors, there's not one sour note. In retrospect, Jason Robards' performance in particular is a bittersweet and powerful one (he died a year later). Also, Tom Cruise's performance is still fairly unstoppable and emotionally sound, particularly because of the so-so work he's done in the years since.

Is 'Magnolia' for everyone? No. Not at all. It's not the pure, joyful blast of fresh air that 'Boogie Nights' was. This is way more dour and intense. But it's also, in its own way, a lot more spectacular. If you've never seen 'Magnolia,' please correct this oversight as soon as possible. If you have seen 'Magnolia,' then you're probably as in love with it as I am. Like all the characters in 'Magnolia,' you love the movie because of its eccentricities and faults, not in spite of them.

The 1080p VC-1 transfer on display here is a marked improvement from the previous home video iterations of the movie and is, frequently, stunning.

Robert Elswit's cinematography looks fairly magnificent here, with detail strong overall, skin tones looking good, texture looking outstanding, and shadows and black levels deep and bottomless. There's a fair amount of dimensionality to this presentation, which is helped by the vertiginous camera. It's just that this same, constantly moving factor adds to some occasional softness in the image (which is a result of improper focus pulling and much more evident in the high definition transfer).

There are no noticeable instances of the dreaded Digital Noise Reduction, there's a fine layer of grain that adds a lot to the film's presentation, and there aren't any technical issues either (no artifacts, noise, or crush).

Another thing I wanted to point out was how great the event at the end of the movie looks. I was worried, since visual effects can sometimes look phony in high definition, that all of the drama of this scene would just hop away. Instead, you're able to soak in all the visual majesty of this sequence and experience fine new details that you may have previously missed.

Occasional softness keeps this from being reference-quality, but it's certainly strong and a measurable upgrade from previous editions, along the lines of the also-just-released 'Boogie Nights' Blu-ray. (Without that disc's commitment to color.)

Much more impressive, at least in my estimation, is the disc's lossless Dolby TrueHD 5.1 mix.

For a while you'll just listen, and be impressed by the reproduction of dialogue – always clean, crisp, well-prioritized, and discernible even when characters are talking over each other. You'll say, "Well, that's a nice use of the surround field" even though it isn't incredibly muscular, but adds just the right amount of atmosphere and ambience (rear channels are used sparingly, but well). And then that moment will come towards the end of the movie. The rain will start to come down and you will feel like you're caught in a deluge. When the next phase of the event starts, you'll be genuinely dazzled. While, for much of the movie it's just good, solid work, that sequence towards the end would be one that I would put on to impress some audiophile friends as proof that even dramas can have kick-ass mixes.

Also, it should be noted that Aimee Mann's songs and Jon Brion's haunting score have never sounded better. I was worried that her whiny lo-fi ditties would have aged poorly, but in the context of the film, they connect beautifully. Ditto Brion's wonderfully active score. In addition, there were no discernable technical issues to speak of, no hiss or pops or anything like that.

All the extras on this disc previously appeared on the two-disc 'Platinum Edition' (remember those?) DVD, released almost ten years ago. Sadly, there are no commemorative or retrospective documentaries, and none of the features have been upgraded to high definition. This is par for the course with Warner Bros.' lesser catalog releases, sadly. 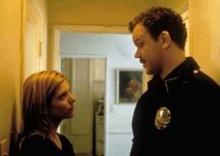 The Blu-ray edition of 'Magnolia' is a strong disc overall, but, like the film, far from perfect. If you're a fan of Paul Thomas Anderson's deeply emotional, messy, bravado character epic, then you're probably going to buy it anyway. To those who haven't seen it, it's Highly Recommended. The A/V is above average and the collection of special features, while old and in standard definition, are still fairly gripping. To paraphrase the opening prologue: 'Magnolia' is not just one of those movies.

Sale Price 14.99
List Price 16.65
Buy Now
3rd Party 13.99
In Stock.
See what people are saying about this story or others
See Comments in Forum
Previous Next
Pre-Orders
Tomorrow's latest releases