When her heart is stolen by a seductive stranger, a young woman is swept away to a house atop a mountain of blood-red clay: a place ?lled with secrets that will haunt her forever. Between desire and darkness, between mystery and madness, lies the truth behind Crimson Peak.

Edith Cushing (Mia Wasikowska) is a modern woman trapped in an early 20th century world. She lives in Buffalo, New York with her adoring, industrialist father where she, thanks to a supernatural experience at a young age, dreams of writing Gothic Romances like Mary Shelley. Because the year is 1901, publishers insist Edith's plot lines are not feminin enough. They need a love story. Edith rejects this notion, partly because it is unfair, but mostly because she doesn't understand such emotions.

Edith has never been in love.

Enter the mysterious Sir Thomas Sharpe (Tom Hiddleston), who has traveled to America with his sister, Lady Lucille Sharpe (Jessica Chastain) in hopes of obtaining financing for a revolutionary new automated mining machine. From what we gather, the Sharpe family has fallen on hard times and they desperately need money not only to make Thomas' invention profitable, but also to save the family house, Allerdale Hall.

When Edith's father rejects Thomas' design (and his personality) it becomes clear the Sharpes have another, more devious plan. To have Thomas win Edith's heart and, with it, access her father's riches.

Allerdale Hall is a Gothic mansion, rotting and sinking into the middle of a lonely field that bleeds soupy red clay (the titular crimson peak). Here, Edith is sucked into an isolated world where she begins to uncover the Sharpes' darkest secrets... And the ghosts those secrets left behind. The drama of the piece comes from whether or not Edith will uncover the truth in time to save herself from Thomas and Lucille's morbid plans. 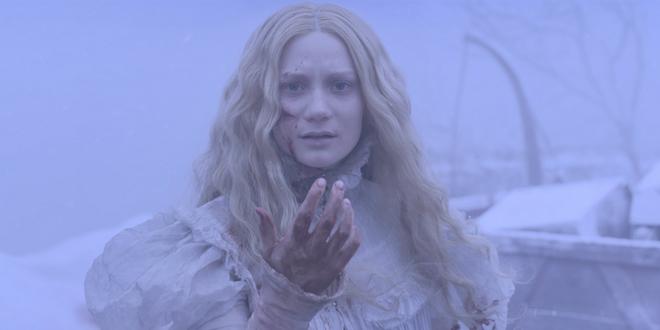 If I had to pitch you 'Crimson Peak', I would call it Jane Austin by way of 'The Shining'. It's about a woman who detests the shackles of (then) modern society, including a cultural demand to fall in love, but through this story falls tragically in love and learns a great deal about love and herself. 'Crimson Peak' is also about the way terrible events linger on and on (literally and figuratively). A Gothic Romance in the truest sense, the more I let this genre buster wash over me -- peeling back visual, character, and story details -- the more I enjoyed it.

I suppose not everyone loves Guillermo del Toro movies (I certainly don't always agree with all of his creative choices), but I'm consistently floored by the incredible worlds he and his collaborators create. Even his simplest stories drip with stunning, evocative production design that simultaneously inform world, character, and plot. It's a lot like watching 'Mad Mad: Fury Road'; the movies present surface stories, but individual frames burst with backstory and universe history. Del Toro films feel lived in and therefore almost real despite heightened fairy tale elements.

More important than del Toro's worlds are the lush ways he fawns over his characters, in this case with the help of co-writer Matthew Robbins. They are draped in costumes and enveloped in settings that evoke backstories and arcs as well as spoken dialog and physical action.

Edith is a classic archetype, but I found her to be painted with such empathy I felt her isolatoin deeply. I suppose we could have a discussion about when she finds out certain things, or whether or not she is passive for too long, but honestly by the film's climax (much like the time taken to build character in 'Man on Fire') the pay off to the slow build is that we are completely with her as she fights for her survival. Thomas and Lucille are equally fascinating. Like Edith, they begin as archetypes (emphasis on the word arch), but del Toro deconstructs the villains in ways to make you, if not wholly empathize with their actions, at the very least understand them.

The film's other main character is the house itself, Allerdale Hall, which is repeatedly described as alive. This is one of the most breathtaking sets built for a film in recent memory, and truly feels like it comes to life with its creeks and groans and ghostly inhabitants. I suppose, because the house plays such a central roll, it fueled my expectations that it was a kissing cousin to the Overlook Hotel.

I hope this isn't much of a spoiler to discuss whether or not the house itself is literally alive, but if you feel it would be, please skip the following paragraph.

Perhaps due to the original marketing campaign, I was expecting a revelation along the lines of, this house needs souls, etc. As such, and as the movie shifted towards its climax, away from the supernatural, I felt momentarily disconnected. Only then did I remember all the clues ("Ghosts are a metaphor for the past.") del Toro and his collaborators sprinkled throughout. Yes there are spirits and ghosts, but this film's tragedy and horror are all driven by human desires and human darkness. Through this proper lens, 'Crimson Peak' is a wonderful exercise in horror and madness. And by the way, I'm not even sure if my momentary disconnection is worth a mention, other than to say it's important to judge a movie based not on where you think it is or should be going, but rather on what it is saying. I'm glad I let the proverbial dust settle with this one, because this movie cooks itself up a killer climax (pun time, fun time!).

'Crimson Peak' is a gorgeously produced Gothic Romance that should appeal to fans of the genre as well as to horror fans in general. Perhaps in a few years it will be heralded as cult classic, it's too early to tell. But on a personal level, having watched it twice now, this flick is growing on me. It's a haunting, romantic, and visceral experience like nothing else Hollywood is releasing these days (and would make a terrific double feature with 'Bram Stoker's Dracula'). I can't wait to revisit it in the coming weeks when the DTS:X firmware update arrives, and hopefully more over the coming years. Bravo. 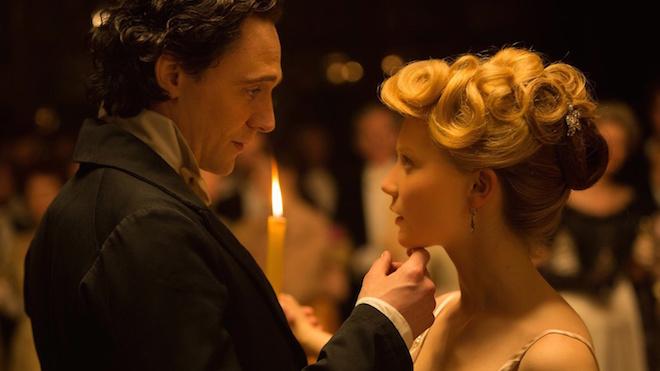 'Crimson Peak' haunts its way onto Blu-ray with two-disc Blu-ray + DVD + Digital HD combo pack bundled in an attractive slipcover with raised title lettering. There is no mention of Region Locking on the Blu-ray; it is a Region 1 DVD. A code is included to redeem Ultraviolet as well as iTunes Digital HD copies. Pre-menu trailers include 'By The Sea', 'Legend', 'Straight Outta Compton', 'London Has Fallen', 'The Forest', and 'Jarhead 3: The Seige'.

The only note I have with the video is that I'm mad at myself for missing it on the big screen (having a newborn does that to you). I'm curious to see what it'll look like in Ultra HD with HDR, even though no such release has been announced at the time I am writing this.

'Crimson Peak' is flawless on Blu-ray. Resolution and image detail are endless, giving viewers a window into skin pours, set textures, ghostly creatures, and costume fabrics. You could spend hours going over this Blu-ray frame by frame, and still miss some of these details. Skin tones do vary depending on the environment and setting, but look is as intended. Color reproduction is excellent; I've rarely see red (crimson?) pop the way it does in this movie. Contrast and dynamic range are strong too. And the black levels are simply drenched in the type of darkness that will show off whether or not your display has the goods. Great examples of what I mean can be found in any scene featuring The Gothic Corridor (see below) as well as the house elevator, which is caked in rust and grease. There is some intended crush, though I didn't notice any encoding errors like banding or compression artifacts.

Grab your favorite snack, turn off the lights, and get ready for one darkly beautiful visual experience.

'Crimson Peak' is the latest Blu-ray to offer the object-based DTS:X audio format, but my loaner Denon AVR-X6200W AV Receiver won't receive the DTS:X firmware update for another couple weeks. Until then, this review reflects the track's core 7.1 DTS-HD Master Audio sound mix.

Even in 7.1, 'Crimson Peak' sets a sound-mixing benchmark to which supernatural-gothic-thrillers should aspire. Everything works. Everything is balanced. It's not the loudest track, nor most aggressive, but along with the detailed production design and elegant cinematography, this soundtrack contributes significantly to the film's dark, foreboding tone. Dialog is on point (human and otherwise). Fernando Velázquez's musical score swells and envelopes. But the sound effects are the true stars, sending chills up and down audience spines. I adore the way Allerdale Hall comes to life through audio elements -- ghostly voices and blowing wind and creaking elevators and fluttering butterflies.

Oh, and for those who have Dolby Atmos and aren't DTS:X ready, 'Crimson Peak' also sounds terrific and provides excellent overhead immersion when run through the Dolby Surround Up-mixer (in 2015 Denon models, this means having your Blu-ray player decode the track so your AVR receives 7.1 PCM; it won't up-mix DTS-HD MA). Given the 7.1 and DSU performance, I'm betting the native DTS:X track will be an aural stunner.

'Crimson Peak' offers a nice set of bonus features, all of them in sparkling HD, totaling a little more than an hour's worth of time, with many Blu-ray exclusives. A director's quote appear after selecting each individual feature, giving the bonus materials a hand-crafted feel. Overall, my only note is that I wish there had been more of a feature-length fly-on-the-wall production documentary. Outside of having that, fans will love the audio commentary.

Deleted Scenes (HD, 4:26). Five short scenes left on the cutting room floor restored here for context. Smart to make these trims, though I really liked the last one.

The Light and Dark of Crimson Peak (7:53). A look at the film's production design that helped recreate 1901 Buffalo and Allerdale. Where Buffalo is bright and colorful and lush, Allerdale is cold and barren and rotting. Color is also a big component to the characters themselves.

Feature Commentary with Co-Writer/Director Guillermo del Toro. Accessible via the Set Up or Extras sub-menus, del Toro's commentary is a must-listen for the film's fans or anyone interested in filmmaking. He enthusiastically takes listeners through detail after detail of what inspired story and design elements, how sequences were assembled, who he collaborated with, his intentions, and everything that went into making this beautifully dark movie.

'Crimson Peak' is a visually rich, Gothic Romance that thrills and chills its way into the audience's heart. I quite enjoyed it and plan to revisit it soon. Please note this movie earns its R rating with the occasional spurt of gruesome violence.

As a Blu-ray, it offers resplendent HD video, extremely immersive surround sound, and a nice collection of special features (including a fantastic audio commentary). The only shame here: we're on the cusp of 4K Ultra HD and I don't if/when this is getting a release. It might be worth waiting to see this movie with HDR.

In whatever format and resolution you choose, 'Crimson Peak' is highly recommended.

Sale Price 20.62
Buy Now
3rd Party 19.99
In Stock.
See what people are saying about this story or others
See Comments in Forum
Previous Next
Pre-Orders
Tomorrow's latest releases