This epic adventure follows a young Marco Polo, who finds himself in the court of the great Kublai Khan and must navigate a world of greed, betrayal and sexual intrigue as the Mongol leader wages a bloody campaign to become Emperor of the World.

Re-creating the legendary explorer’s 13th century exploits in the Far East, this historical drama chronicles the intrigues, duplicity and greed running rampant in the court of the Mongolian ruler Khan.

When dealing with history or historical figures, a film adaptation or TV series event can go one of two ways; be completely slavish to the person or event in question, or the events and characters need to be glorified and pumped up to the point that the finished product is fantasy. Netflix's TV series 'Marco Polo' about the 13th Century explorer who traveled all over China, the Silk Road, and became a subject to the court of Kublai Khan is the focus of a series whose grasp on history is tenuous at best while it aims a broad shot to appeal towards a wide audience. Whether or not the audience wants to travel that path with this 'Marco Polo' will depend entirely upon the sensibilities of the audience.

Young Marco Polo (Lorenzo Richelmy) has grown up not knowing his explorer father, Niccolò Polo (Pierfrancesco Favino). Marco was born while his father Niccolò was away exploring the far east with his brother Maffeo (Corrado Invernizzl). After over 16 years of travel, Niccolò and Maffeo have returned on a mission to gather supplies and an emissary of the Holy Roman Church to travel back to the court of the emperor Kublai Khan who rules northern China. Marco, desperate to see a world beyond the one he's grown up in, begs his father to allow him to go along on their next voyage, but not knowing the tenacity or education of his son, Niccolò refuses the boy. Unable to be dissuaded, Marco sneaks aboard his father and uncle's ship and isn't discovered until it's too late to put back to port.

As Marco joins his father and uncle, he quickly learns the ways of the new people they encounter including a grasp at the local languages. When the emissary sent by the Pope is among the first to abandon the journey, Marco soldiers on braving the elements and sickness until they reach their final journey - the court of Kublai Khan (Benedict Wong) and his wife Empress Chabi (Joan Chen) who rules his northern reaches of China with an iron fist as he seeks to conquer the southern reaches. When Kublai Khan learns of Marco's language skills and appreciation of the lands he's traveled, Kublai Khan demands that the boy stays as a member of his court as part of the terms of the trade agreement he makes with Niccolò and Maffeo.

Abandoned by his father and uncle in a strange land, Marco has no choice but to adapt. Even with the contempt he holds for the situation at hand, Marco is a quick study. He perfects his language abilities, Chinese calligraphy, as well as martial arts and Mongolian battle techniques. As his usefulness to Kublai Khan grows, Marco plays witness to a turning of events within China as the great leader seeks to empower his son Prince Jingim (Remy Hii) by pushing unprepared and ill-equipped military forces further and further south. As Kublai Khan's empire becomes increasingly threatened by outside influences, Marco soon learns that his very survival depends on his own personal skills as well as the will of the Khan. 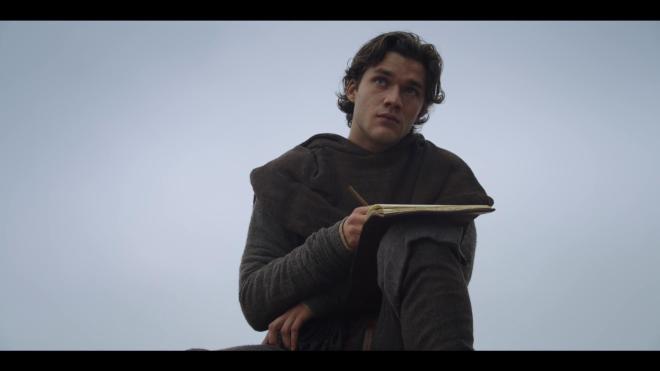 'Marco Polo' is a tough show to know what to make of. For starters, it isn't exactly historically accurate as even a number of the stories of the real life Marco Polo are up for debate, but even as a fantasy version of history it doesn't quite work either. By placing the story within history and involving historical characters, much of this show's credibility is undone with a simple wiki search. Compounding this show's several issues is the fact that Marco Polo really isn't the central character here, Kublai Khan is. We see more and learn far more about the inner workings of Kublai Khan, his family, the politics of the region, and his inner desires and demons than we do about Marco. As the titular character, Marco Polo spends a great portion of each episode not on screen and when he is around, the show does little to make him an interesting character worth investing our time and attention into.

Passivity is a fine character trait so long as it goes somewhere. So much time throughout the first half of this first season of 'Marco Polo' is spent showcasing how Marco has no control over anything that by the time he actually stands up and does something, it's almost too little too late. It would be one thing if Marco was held in a cell and was actually treated like a prisoner, but he's not. Marco is given every means to expand his understanding of the culture from fighting to language to women. This leaves his hatred of his father as the single reason for him to be a dissatisfied and irritable individual. Since the sum total of backstory we're given about Marco and his relationship with his father Niccolò is explained away within a five-minute flashback, there's really no reason for the character to be as bland as he is.

This isn't meant to be a slight against Lorenzo Richelmy's performance as he does bring some level of weight and presence to the part, it's just the material he's given to work with is nowhere near or as dynamic as that provided for Benedict Wong as Kublai Khan. Had this show been retitled 'Kublai Khan' and the presence of Marco Polo was to serve as a window into that world for the audience, this show maybe would have worked better. Considering the conspiracies within Khan's realm as well as the plot from the remaining royal family in Southern China to overthrow Kublai Khan, the inner angst of Marco Polo is pale material by comparison.

While 'Marco Polo' isn't the best show ever conceived and brought to television screens, I'll admit that it is rather entertaining - eventually. My real issue with 'Marco Polo' as a source of entertainment is that nothing really interesting happens for the first three episodes, and even then you could argue that most of episode four is setup for everything that comes after. To that end, if you're willing to give this show three and a half hours to actually become something worth watching, the payoff is there and the setup for Season 2 proves tantalizing. However, with so much other amazing content to catch up on, that three and a half hours is a precious amount of time to get through. My advice is to proceed with caution and understand that it does get better if you're willing to let it.

Netflix's 'Marco Polo: The Complete First Season' arrives on Blu-ray thanks to Anchor Bay/The Weinstein Company. All ten episodes of the first season are pressed onto 3 Region A locked BD50 discs. Housed in a three-disc Blu-ray case with identical slip cover artwork, each disc opens directly to an animated main menu. All extra features are located on Disc Three of the set.

While I may not entirely enjoy watching 'Marco Polo,' I will say that this series' 2.00:1 1080p transfer is a beauty. Shot digitally, this is the kind of big-budget costume drama that makes Blu-ray worth the investment. From the impressive costuming to the immaculate production design to the intricate makeup effects, this is a gorgeous looking show. Detail levels are revealing and showcase all of the finer bits and pieces of the show's production. Colors are bright, robust, and provide plenty of primary pop and presence while the show features a warm golden tone in most scenes. Black levels are rich and inky without any crush issues leaving an image that has a strong three-dimensional presence to it. This is an expensive-looking show that looks glorious on Blu-ray.

Just as impressive as the image quality, the English DTS-HD MA 5.1 audio tracks that accompany each episode of 'Marco Polo' are fantastic. Dialogue comes through with crystal clarity and is never a problem to hear or understand what is being said - even at the most quietest of times during the show. Audio elements such as sound effects and music have plenty of space and don't impede one another or the dialogue. Imaging is subtle but very strong as there are plenty of ambient sounds and atmosphere effects to keep the surround channels engaged and provide a sense of movement. The series' strong points are during the action beats and combat scenes where there is a lot of sword on sword contact and other combat audio effects. Levels are pitch perfect as these war scenes are usually followed by a quiet and ponderous conversation and the audio tracks for each episode have no trouble adjusting leaving no reason to monitor your volume.

The Marco Polo Documentary: (HD 38:02) Show creator John Fusco and other crew and story advisors take an interesting look back at the real Marco Polo, who he was, and how the story of his adventures in China inspired travel and the push for trade with the east.

The Martial Arts of Marco Polo: (HD 7:33) This is a quick but interesting look at the fight sequences that were choreographed for the series.

The Visual Effects of Marco Polo: (HD 2:57) This is a very brief before and after look at various scenes that were enhanced with visual effects work.

Concept At-to-Scene Comparison: (HD 3:08) A brief but very cool look at the design work that went into the series and the finished product.

The Making of the Opening Titles: (HD 1:40) A short look at how the film's rather beautiful ink-styled opening credits were created.

Fight Scene Rehearsals: (HD 12:11) This is a look at what went into shooting the 8 key fighting sequences of the series. While each fight is given only about a minute or two, it's quite clear they spent a lot of time prepping and executing each fight sequence.

Deleted Scenes: Each episode - save for six and seven - had between five to ten minutes worth of deleted material. Some of it was interesting, but you can see why many of these sequences were ultimately cut.

While 'Marco Polo' may not be the best new show out there, it's hardly the worst either. I know that sounds like faint praise, but so much of this show is spent setting things up and not focused on the central character that it's hard to understand why it was titled 'Marco Polo' at all. Thankfully the latter half of the first season picks up the pace and proves worth the effort. Anchor Bay has done a solid job transporting 'Marco Polo' to Blu-ray featuring a picture-perfect image quality and fantastic audio tracks to match. Some pretty decent extra features were also provided for this set and are actually worth watching. Fans of the show should be happy, others new to the program willing to put in the time should consider 'Marco Polo' worth a look.

Sale Price 34.98
List Price 49.99
Buy Now
3rd Party 19.99
In Stock.
See what people are saying about this story or others
See Comments in Forum
Previous Next
Pre-Orders
Tomorrow's latest releases