After rescuing his kidnapped niece from a powerful drug cartel, Colton MacReady (Scott Adkins) begins a relentless fight to save his family. The cartel has descended upon his secluded ranch with a thirst for revenge. In tow are a corrupt local sheriff and his crew of deputies, ensuring that help won't be coming any time soon. What ensues is a non-stop assault on the ranch, a blow-by-blow survival marathon for Colton to protect his loved ones and save his life.

Good dumb fun is a fine thing to have with your entertainment. Somedays after a tough day at work or a stressful commute, a stupid movie that was made purely for entertainment's sake is like a visual equivalent of a shot of strong liquor. It distracts you, helps you stop thinking for an hour or so, and may even help put a smile on your face. As a child of the 80s, I've learned that action movies are among the best ways to kick back and relax. After all, there's nothing quite like a solid Chuck Norris flick to help put you in the right mood! That said, not every dumb action movie is good at its job. Sometimes dumb can just be stupid to the point that what you're seeing has little redeemable value. 'Close Range' starring Scott Adkins and the always awesome Nick Chinlund starts as a solid good-dumb-fun action flick, but sadly, ends up becoming a mind-numbingly-stupid action movie very quickly.

When dealing with a Mexican drug cartel boss, it's probably a good idea not to kill his nephew. It's especially important to not kill his nephew if said nephew happens to be carrying a flash drive full of ultra incriminating banking data. That may be sound advice but apparently ex-special forces super force Colton MacReady (Scott Adkins) didn't get the message. Granted, he was in the middle of saving his kidnapped niece Hailey (Madison Lawlor) because her mother Angela's (Caitlin Keats) crooked new husband Walt (Jake La Botz) ran afoul of the Fernando Garcia (Tony Perez) cartel. When you're taking on an entire building of crooked cops and bad hombre's with machine guns, Colton understandably didn't think about repercussions when he pocketed the flash drive. But since Garcia needs that flash drive, the U.S./Mexico border doesn't mean a whole lot to him and he's coming for Colton and his family.

Colton and his sister Angela's first sense that trouble is brewing when Sheriff Jasper Calloway (Nick Chinlund) arrives. Calloway once was a good man, Colton even saved his life, but temptation got the better of him and he's long been in Garcia's pocket. Where he was once paid to look the other way, Garcia now expects Calloway to get involved directly and bring him Walt, as well as Colton - dead or alive - by the time he crosses the border. With no other choice, Colton is going to have to fight the local Sheriff department deputies as well as an entire gang of Mexican drug thugs to ensure the safety of Angela and Hailey. 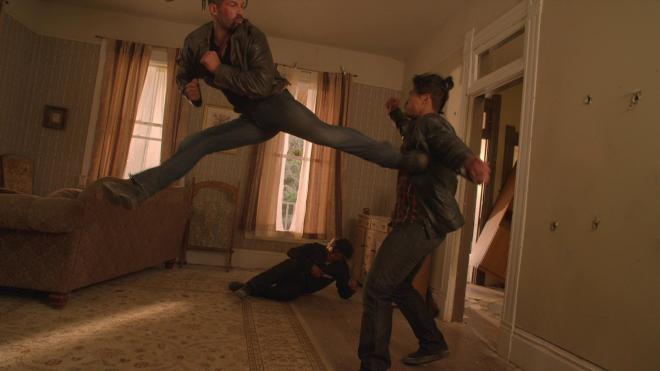 Woof. 'Close Range' is one of those movies that going in I had heard pretty bad things, so my expectations were appropriately low. When it started out at a brisk pace not wasting time getting into the action and allowing Scott Adkins to dispatch a bunch of guys with only a pocket knife with his traditional acrobatic flair, I thought I was actually going to enjoy this movie. And I did… for a moment. Once that opening action sequence crescendos and the hokey opening credits roll, 'Close Range' steadily slips downhill and never manages to find its footing again.

I don't expect a lot from direct-to-video action movies. They're usually undercut by a small budget and short production times and can really only rely on the casting of one or two key individuals. Some gems do come out of this process, but unfortunately 'Close Range' wasn't one of them. The plot and story setup are there for a solid B-Movie action thriller, the problem is the numbingly-redundant mechanics of the movie. The film features two incredibly long car chases that go nowhere, do nothing to advance the plot, and both of them end in the same little patch of dirt. Granted it works to provide Adkins an opportunity to do some fancy flips and kicks but again, kinda boring since it took so long to get to the fisticuffs in the first place. Then you have the butt-numbingly long gunfights. Without giving much away, there comes a point where Colton and his family are held up inside their house with Garcia and his goons outside and the only thing they do for ten minutes is shoot at each other. No one hits anything but framed pictures and cars that entire time. And just when you think the gunfight can't go any longer… they reload their guns and start shooting again. Then there is the final, classic "Mexican Standoff" moment. Again, this scene lasts probably two or three minutes longer than need be since the audience knows what's going to happen.

Where 'Close Range' is at its best is when Scott Adkins is allowed to strut his stuff and show off what he can do. The man is a natural talent for this sort of movie. His moves are fast, furious, and painful-looking. When he clocks a guy in the throat or stabs a man through the hand, you cringe and recoil your limbs because just looking at that happening on screen hurts. Unfortunately, 'Close Range' spends entirely too much time keeping Scott Adkins grounded and firing guns or running away from speeding cars to be truly effective at showcasing its lead actor's martial arts prowess. I hope that with his upcoming appearance in Marvel's 'Doctor Strange' that Adkins will finally land a big breakout role that puts and end to this chapter of cheap action movies in his career. The guy deserves better than what 'Close Range' has to offer.

'Close Range' arrives on Blu-ray thanks to XLrator Media and is pressed on a BD25 disc. No region coding is indicated beyond it obviously working on Region A sets. Housed in a standard Blu-ray case, the disc opens to a series of trailers for other XLrator Media releases before arriving at the film's animated main menu featuring clips from the film with music playing in the background with a standard navigation system.

Given the clarity and video feel of the image for 'Close Range,' the 1.78:1 1080p transfer is clearly struck from a digital source. How well that makes you feel about the image transfer itself is purely subjective. While the clarity is present allowing an intense amount of fine details to seep into the image, it does maintain that "video" look throughout. Considering the low-budget nature of the movie, I would have been frankly shocked to learn it was shot on film. That said, this is an overall very good presentation. Colors are warm, favoring desert yellows and brighter primaries without impacting flesh tones. Black levels are solid as a rock helping to create a very three-dimensional feeling image. Where trouble starts is when the camera moves a lot, and when the fights break out there is a lot of movement - motion blur is kind of an issue -- creating some slight video noise here and there. Otherwise, this is a fine transfer for a movie of this type.

'Close Range' comes packed with an effective yet slightly problematic DTS-HD MA 5.1 audio track. While dialogue is crystal clear and the track offers up plenty of space for action-packed surround channel fury, the levels betray the movie. The track simply doesn't handle the peaks and valleys very well, so when the bullets stop flying and characters start talking, it forced me to frequently have to adjust the volume to hear what was being said. Then the bullets started flying again and I needed to turn it back down. Thankfully there are long stretches in between these moments so you don't always have to have your thumb on the button, but if you have thin walls like I do, you might want to maintain a vigilant ear. Imaging is fantastic as there is near-constant use of the surrounds allowing for plenty of channel movement. The track is at its best during the hand to hand fight sequences giving each punch, kick, slap, and stab plenty of auditory oomph.

Aside from the skippable trailers when the disc loads, there are no other extra features present.

It's genuinely hard to recommend 'Close Range' for any action junkie. Aside from a couple decent fight sequences, the film itself is a slog and a half to get through. Numbingly boring gunfight scenes that go nowhere and do nothing really tear down what could have otherwise been a half-way decent B-Movie action flick. With a solid image transfer and a serviceable audio track, there just isn't a whole lot to recommend this movie for unless you're extremely hard up for an action movie. Otherwise I gotta say skip it and find yourself a better Scott Adkins flick to enjoy.

Sale Price 17.53
List Price 20.99
Buy Now
3rd Party 3.81
In Stock.
See what people are saying about this story or others
See Comments in Forum
Previous Next
Pre-Orders
Tomorrow's latest releases