CRIMINAL ACTIVITIES tells the story of four friends stumble into a deal too good to refuse. But when the investment goes bad, they learn that part of their funding came from a notoriously ruthless crime boss… and it’s payback time. Now they must successfully kidnap a family member of a rival kingpin in order to erase the life-threatening debt. In way over their heads, if they can complete the assigned task without screwing up, they just might escape with their lives.

"My feeling is that accessory to murder is the greatest motivation…"

Is it creative and personal need that compels an actor to take on directing or is it ego that drives them to take control of a film? That's a bit of a loaded question considering it should be assessed on a case-by-case basis, but it does make one wonder in some instances. While many actors and actresses have turned into fine directors over the years, others make misguided attempts at directing feature films as a means to wax their own egos. Of the long list of actor's to make the leap from in front of the camera to the director's chair - it is now Oscar-nominated actor Jackie Earle Haley's turn with 'Criminal Activites.' While the talented actor certainly has a flair for some fluid camera work and a decent sense of pace, Jackie Earle Haley the Director seems to have had a hard time resisting the urge to give Jackie Earle Haley the Actor all of the best scenes.

When you're handed a sure-fire, no-risk, guaranteed to cash in an investment opportunity, it's probably a good idea to look the gift horse in the mouth. Unfortunately for hotshot investment broker Zach (Michael Pitt), he didn't realize that the company he sank every cent of his clients' money, his own cash, as well as $200,000 of funds from his buddies Noah (Dan Stevens), Warren (Christopher Abbott) and Bryce (Rob Brown), was being investigated by the Feds. When the CEO of that company got arrested for fraud along with numerous other charges, that money went up in smoke. What Zach, Warren, and Bryce didn't know was that Noah had to borrow the money to put up the $200,000 from known mobster Eddie Lovato (John Travolta). Now the boys need to pay up and cover the vig totaling $400,000! How do you pay back a mobster when you don't have any cash of your own? The dangerous and potentially deadly answer to that question is you have to do a little favor for the man.

It turns out Eddie's niece was kidnapped by a rival and now Eddie needs to square things up. To do that, he aims to kidnap his rival's nephew Marques (Edi Gathegi), and Zach, Noah, Bryce, and Warren are the perfect men for the job - because they have no other choice. While the snatch job didn't quite go as well as planned, the boys got Marques safely stashed away. As they babysit their captive, Eddie has his right-hand man Gerry (Jackie Earle Haley) hunting down leads to free Eddie's niece. It's only a matter of time before Marques' uncle finds them and kills them, or Eddie potentially pulls the trigger himself. The four friends are stuck in between a rock and a hard place with no way out.

When I read that a film is the work of a first-time director, even a seasoned actor, I tend to give it a little leeway. While I may let out a little too much rope at times, I don't like to jump on a movie for being bad when the person behind the camera is wading in new waters themselves. That said, Jackie Earle Haley's debut as a director isn't half bad. 'Criminal Activities' isn't a great movie by any stretch, but it isn't as terrible as it could have been. The story itself is basically a rehash of some of the story element's of 1997's 'Suicide Kings.' During the scenes between Zach, Marques, Noah, Bryce, and Warren there really isn't much to differentiate between the two. On the flip side, we do get to enjoy a fun turn from John Travolta, who spends half of his time in the movie running around in a bright blue tracksuit as he trains for a 5K while conducting business. There is a sense of humor to 'Criminal Activities' that puts a nice spin on things. I can't go into too much more detail, but I will say you're either going to dig on the ending or you're going to outright reject it. I kinda dug it myself but I can see how it can feel a bit out of place to a lot of moviegoers. 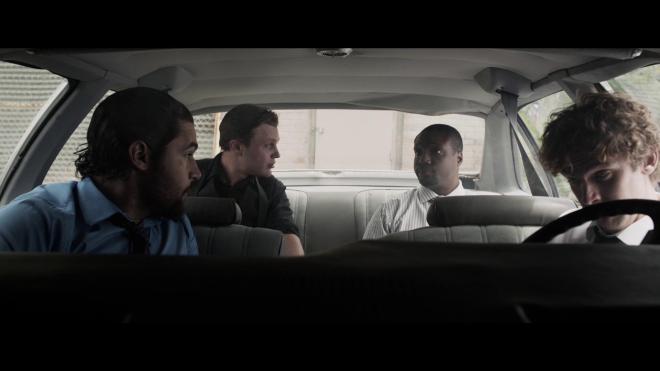 However, it's that humor that also gets 'Criminal Activities' into a bit of trouble. The tone of the film just isn't consistent. One moment the movie is a taught psychological thriller as the four friends try to figure a way to clear themselves of the trouble they're in, and then the movie switches gears and is funny again. A number of these humorous scenes land squarely on the shoulders of Jackie Earle Haley himself. This wouldn't necessarily be a bad thing, but since his character Gerry is such a side character without any logical importance to the rest of the story, it starts to feel a bit off. Especially when one of the best scenes of the entire film is an explanation why Gerry has a long scar at the base of his ear. It may be a great scene that's well directed and loaded with dark humor, it's just not needed. There are a number of moments like that throughout the film making me feel like if Jackie Earle Haley had either put himself all the way out there and cast himself in Travolta's role or had not been in the movie at all, the film may have worked better in the end.

As it stands, 'Criminal Activities' isn't a bad movie, it's just unmemorable. It was pretty nice to see 'Finding Forrester' costars Michael Pitt and Rob Brown share some screen time together again. Travolta is a lot of fun when he's on screen, as is Jackie Earle Haley. But when you combine all of these story elements and a large cast of eccentric characters, the film starts to get too muddled for its own good. A little trimming here and there, some character changes, and a little more focus on tone and 'Criminal Activities' could have wound up being a pretty fine little flick. Right now, it's just okay. It's not amazing or great, but it isn't terrible either. I'm at least interested to see what Jackie Earle Haley comes up with for his next outing behind the camera.

'Criminal Activities' arrives on Blu-ray thanks to RLJ Entertainment pressed onto a Region A BD25 disc. Housed in a standard Blu-ray case with slipcover, the disc opens to trailers for past and future RLJ releases before arriving at the main menu featuring standard navigation options.

'Criminal Activities' arrives with a pretty strong 1080p 2.40:1 transfer. Daylight scenes feature plenty of detail and bright colors while the film's numerous night shots appropriately dull things down depending on light source. This is a movie that tends to have the look that it was shot in a dive bar with a lot of low lighting, so colors rarely pop in a way that lets primaries stand out. Flesh tones appear accurate. Black levels are nice and inky giving the image a nice sense of depth. Overall this is a fine transfer. For the current generation of high-definition, this is on par for a new release. It's not blow your hair back amazing but it doesn't have to be.

'Criminal Activities' arrives with a strong English DTS-HD MA 5.1 audio track. This is a pretty lively movie with sound effects, music, and a lot of dialogue keeping things active and interesting throughout the runtime. Dialogue is crystal clear without any distracting or overlapping sound effects to compete with. Surrounds are frequently engaged, even during some of the more quieter conversational moments there's something else to listen to whether it be a waitress delivering drinks to another table or a car passing by; imaging is pretty strong. Levels can be a bit touchy during some of the more intense sense where everyone is yelling at each other, on top of the shouting the music tends to swell with the moment making it a cacophony of sound, so you may want to keep an eye on your volume for these moments, but otherwise most scenes are well balanced and natural sounding. All around a fine audio track.

Deleted Scenes: (HD 2:09) A brief couple of scenes that really don't add much to the film, just some assumed filler content.

'Criminal Activities' turned out to be an okay first outing as a director for actor Jackie Earle Haley. It may not be a perfect dark comedy/thriller, but it's entertaining enough and it features some pretty great performances all around. So on that level it's at least worth a viewing. RJL has pulled together this Blu-ray release featuring a pretty standard A/V presentation, it's good, but it doesn't wow. Extras are a bit skimpy however. 'Criminal Activities' on Blu-ray is a pretty solid rental.

Sale Price 7.88
List Price 29.97
Buy Now
3rd Party 10
In Stock.
See what people are saying about this story or others
See Comments in Forum
Previous Next
Pre-Orders
Tomorrow's latest releases