"After suffering a heart attack, retired General José Mendieta (Damián Alcázar) is haunted by his dark past as an officer in Operation Condor, the CIA-backed campaign of political repression in Latin America that was responsible for executions, torture, and imprisonments in the 1970 s. It is estimated that over 400,000 people were imprisoned and 30,000 forcibly disappeared as a result of these government actions. In a letter to his son Pablo (Bernardo Peña), Mendieta confesses the role he played in the abduction, persecution, and execution of countless men and women during his posting to Chile. Journalist Marco (Carlotto Cotta) and his pregnant wife Luciá (Carla Ortiz) are among those who were arrested, along with their activist friend Antonio (Tomás Fonzi) and revolutionary Andrea (Ana Calentano). They suffer terribly under Mendieta and his cohort Sanera (Rafael Ferro, Guapas), which leads to a cascade of betrayals, secrets, and stolen lives that spans generations. Olvidados (Forgotten), Bolivia s Foreign Language Film submission for the 87th Academy Awards®, stars renowned actors from five countries, and was filmed in Bolivia, Argentina, and New York. It is the first film to specifically address the horrors perpetrated under Operation Condor, which was responsible for: 50,000 deaths; 30,000 disappeared ; and 400,000 arrested and imprisoned in Argentina, Bolivia, Brazil, Chile, Paraguay, and Uruguay. "

Movies have a way of moving mountains, becoming beacons for social injustices and expose an issue to the public. Movies like this aren't made every day and perhaps only a handful come out in a single year - if even that many. But when they do come out, it feels like an obligation to see them and experience an event or a period of political unrest through a well thought out story and smartly executed film. Oliver Stone's 'JFK' is a film that comes to mind. A movie, while steeped in conspiracy theories managed to serve as a lightning rod to galvanize the Freedom of Information act. Carlos Bolado's 'Olvidados' tries to do the same thing by exposing the horrors of the CIA-run College of the Americas and their role in the disappearance, torture and murder of thousands of people throughout Latin America. The problem is 'Olvidados' doesn't know how to balance truth and fiction in convincing ways creating a work of propaganda, rather than an enlightening work of art.

Retired General José Mendieta (Damián Alcázar) is a man who can see the end of his days coming. No longer a part of the Bolivian military, he spends his days being cared for by a maid and a nurse. He gets some exercise here and there, but he spends most of his time waiting by the phone for his estranged son Pablo (Bernardo Peña) to call him. Pablo has a new life in New York with a young wife and a family of his own and has little time for his father. So the elder Mendieta walks around his neighborhood flooded with memories of his younger exploits - many of them not very happy.

During one such walk, General Mendieta happens upon a book signing at a local shop. The name of the author brings back the most haunting and horrific memories. When General Mendieta sees the man inside, and the man's wounded eyes look into his, Mendieta tries to flee but is immediately brought down by a sudden and severe heart attack. The doctors and nurses placate him by saying that a lesser man would have died, but General Mendieta knows that his time is limited and he can not go to his grave with the truth of terrible events locked away inside him. In order for one of the worst crimes against humanity to come to light, General Mendieta needs his son beside him. He needs his son to hear his confession, a confession that will expose generations of lies, betrayal, torture, and murder.

On the face of it, 'Olvidados' is a fascinating look at a dark time in Latin American history - one that United States policy was complacent in. In a quest to root out any and all communist influences and deter any kind of uprising the likes of Castro and Che Guevara from spreading beyond Cuba, it was the policy of the time to support and supply men who would stand up to communism - no matter their dark military history. It's a sad era in world history and one that isn't widely discussed. To that end 'Olvidados' works. As a stark reminder of a terrible chapter in world history that has been forgotten, this film does a decent job putting a face to tragedy. The problem comes in the form of presentation. 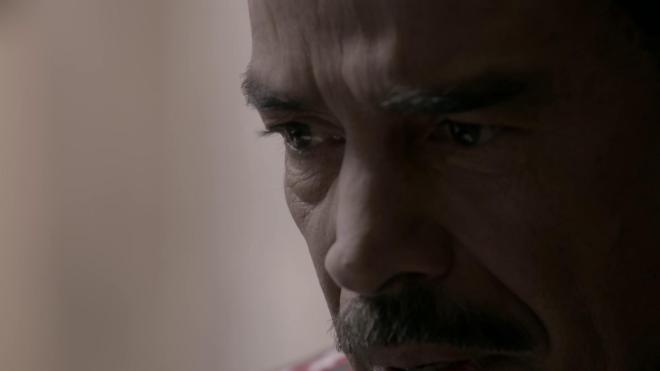 At the outset of this review, I purposefully mentioned Oliver Stone's film 'JFK' because 'Olvidados' goes a long way towards trying to capture the editing structure and finesse that made 'JFK' such an incredible experience. Watching Oliver Stone's film felt like you were watching someone ripping off a vault door that held all of the dirty secrets - even though it was mostly conjecture. 'Olvidados' tries to do the same thing by blending new footage with old stock materials in order to legitimize its fictional story, to present it as fact. The issue is that all of the new footage was shot digitally and with the use of post-production filters attempts to replicate the image so it feels like in certain places that you're actually watching a piece of archival 16mm or 8mm film footage. Because the use of the same sort of 16mm or 8mm cameras and black and white film stock weren't used, the film loses a lot of emotional heft and punch because it's trying to look too slick for its own good.

Now I don't normally mind when a film has a message or is trying to take on an issue, but in this case, it's another clear example of a filmmaker wearing their cause on their sleeves. This isn't to suggest that the events that transpired in Latin America shouldn't be brought up or exposed, but such material shouldn't be handled with kid gloves. In its attempt to tell a multi-generational story like this, it loses so much of its focus that the message is lost. When the film is trying to horrify with depictions of torture and brutal murder, it cuts itself off at the ankle by trying to be too fancy. Honest and straightforward filmmaking works far better than is often given credit. Just because you can add an "aged film" filter on Final Cut Pro X doesn't mean you should. It is also through this mishandling of flashbacks that so much of the film's resonance and meaning goes to pot. Flashbacks work when there is a present time storyline correlation to relate the scenes together and then the meaning comes though. Instead, the flashbacks come with such a random flurry that the only message I was able to glean from what I was seeing was the filmmaker shouting "See this? See this horrible thing happening in my movie? You should be upset with it!" I guess what it comes down to is that I'm not someone who enjoys being preached to - especially if I'm already in the choir. I was already on the side of the filmmakers here, I didn't need convincing that what I was seeing was terrible. Had 'Olvidados' done away with an agenda and just was a dramatic movie about a father and his estranged son learning his family's history, I feel like the material would have come through far clearer without the odious feeling of propaganda.

'Olvidados' is presented in a 1.78:1 1080p transfer that features the best and worst aspects of digital filmmaking. One one hand, detail levels are fantastic as costumes, architecture, scenery and facial features come through with beautiful clarity. On the other hand, there are a number of moments throughout the film's run where things feature an almost distracting level of video softness to them making what could have passed as a film-like presentation start to look like a daytime soap opera. Colors shift wildly throughout depending on time period and character perspective. Intermittently cool and warm looking, primaries are a subdued presence favoring golden tones and deeper olive greens. Black levels are strong overall, although there are some moments of crush during night scenes that left some characters looking like floating heads. All around this is a pretty good HD presentation, but the use of filters and the source limit the quality.

Featuring a Spanish Language Dolby Digital 5.1 audio track, 'Olvidados' packs just the right amount of auditory punch. The film itself is largely dialogue driven and the Spanish spoken language is crystal clear with hardcoded English subtitles. The surround channels are constantly engaged although they aren't regularly used to convey a sense of imaging or directionality. Instead some of the more subtle background sounds and the film's score are used to fill the channel space. Levels are spot on without any need to monitor volume.

Making of 'Olvidados': (HD 15:37) Actress/Producer Carla Ortiz talks about the making of the film, what drew her to the material and the film's reception. It's clear this was a passion project for her and her enthusiasm for the material comes through here.

Photo Gallery: (HD 3:27) This is a collection of stills and behind the scenes shots.

'Olvidados' is a movie that wears its heart on its sleeve - for better or worse. While I felt the film's message was a bit heavy-handed, I could still appreciate what the filmmakers were trying to do with a story like this. It's certainly not a movie for everyone and features some tough content. Cinema Libra Studios has done a decent job bringing this film to Blu-ray with a serviceable A/V presentation and some pretty good behind the scenes extra features. A blind buy is a tall order so I strongly suggest that if you're curious about 'Olvidados' that you give it a rent first.

Sale Price 27.55
List Price 29.95
Buy Now
3rd Party 10.98
In Stock.
See what people are saying about this story or others
See Comments in Forum
Previous Next
Pre-Orders
Tomorrow's latest releases