Overview - When an MMA champion is thrown into a twisted world of underground fighting to save his wife's life, he takes desperate measures and violently fights to the death against many of his fellow MMA champions. They too, controlled by the underground cage, are fighting against their will to save the lives of their loved ones. While onlookers place online bets, one champion will rise to the top and uncover the identity of the mastermind behind the corrupt tournament. The ultimate showdown will prove that there can only be one true Death Warrior.
OVERALL
Tap! Tap! Tap!

I'm not much of a follower of Mixed Martial Arts or the UFC (Ultimate Fighting Championships), but I have caught a few matches on cable. It's obvious the sport features some of the strongest and toughest athletes in the world. The damage these skilled combatants can inflict and the abuse they're able to endure are incredible physical feats, and they truly deserve nothing but the utmost respect.

So why any of these fighters would jeopardize that respect with direct-to-video drivel like 'Death Warrior' is completely mind-boggling to me. Did anyone at UFC even watch this laughable piece of garbage? I really have to wonder, because if they had I sure as hell doubt they'd want their names plastered on it in any way, shape, or form. I mean, I'm fully aware that some folks believe there's no such thing as bad publicity, but my god, if they keep producing pathetic stuff like this it definitely won't be long before the fans themselves start tapping out.

Hector Echavarria stars as Reinero, an undefeated mixed martial arts champion about to enter his retirement. Reinero's decision to hang up his shorts doesn't last for long, though, as his trainer Gus (Ron Gabriel) has just brought news of a potential bout that's just too juicy to pass up. This of course doesn't sit too well with Reinero's beautiful wife Kira (Tanya Clarke), although she forgives him anyways with an evening filled with steamy hot sex.

Later that night while the happily exhausted couple is busy recharging, Reinero is unexpectedly disturbed from his much-needed sleep. An unsettling wave has come over him, a sense that something is wrong. The feeling only worsens when he discovers that the power is out, the phone lines are out, and somehow their cell phones no longer have any service, either. But what really seals the deal is when Reinero stumbles across multiple intruders in their apartment--and they're armed to the teeth.

Reinero springs into 'Die Hard' mode, quickly disabling a few mercenaries with his bare hands. Except unlike John McClane, Reinero makes the mistake of not taking any of their weapons afterwards. So unsurprisingly, Reinero is eventually taken down and introduced to their leader, the slimy entrepreneur Ivan (Nick Mancuso). Ivan is the mastermind behind an underground fighting ring being broadcast over the Internet, and he intends on making Reinero his latest star. But just to ensure Reinero is game, Ivan injects Kira with a slow-acting neurotoxin for a little added insurance. Now if Reinero plans on keeping his wife alive, he'll have to plow his way through his fellow MMA competitors -- in brutal fights to the death.

The one good thing about 'Death Warrior' is that you'll likely give the muscles in your neck a healthy workout -- as I found myself shaking my head constantly for the entire hour and a half. This poor excuse for a "film" is ripe with flat out laziness, beginning with the story (hastily written by Echavarria) lacking a single molecule of originality. The movie reads like an encyclopedia of action movie clichés, and the atrocious dialogue is made even more unbearable since none of these people can act. Even when the MMA fighters are simply hanging out and shooting the breeze together, the conversations come out forced and robotic, as if everyone is being fed their lines from a teleprompter. Worse still, some things manage to defy logic, like when Kira sneaks past gunmen in Ivan's mansion while they don't notice the clicks of her high heels rampantly echoing throughout the place, or when she's writhing in insufferable pain one moment and two seconds later she's engaging in round two of sexual bliss. Think I'm exaggerating? Sadly, I'm not.

Now one would figure, considering the talent involved, that the action must at least pick up some of the slack, but unfortunately the fight choreography is just as pitiful as everything else. Let's dissect Echavarria's first match-up against Quinton "Rampage" Jackson, shall we? For starters, these guys just stand there waiting for the other's blow without making an attempt to move out of the way. And maybe this is just me, but I know if I were in a no holds barred fight to the death, the very last move I'd think about pulling from my repertoire would be an airplane spin. Seriously, what the hell was that all about? Then once Reinero finally kills his friend (without much hesitation or regret I might add), Nick Mancuso's character makes an appearance and says, and I swear I'm not making any of this up, "I've seen some ugly fights in my day, but that one took the cake!"

Well, you know what Nick? You took the words right out of my mouth.

Lionsgate dumps 'Death Warrior' onto a single-layered BD-25 Blu-ray Disc inside a standard blue keepcase. Before getting to the menu, there's a really tacky 'Lionsgate Blu-ray' promo (please get rid of this thing, it's totally cheesy and the public hates them anyways) as well as a trailer for 'Wrong Side of Town.' The U.S. version of this Blu-ray is reported to be region locked and therefore will only function properly in Region A compatible PlayStation 3s and standalone machines. 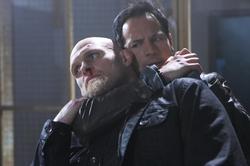 Well, I'm not going to pull any punches here, either. Lionsgate's 1080p/AVC MPEG-4 (1.78:1) encode for 'Death Warrior' is an ugly one, not to mention an embarrassment to the format.

Saying the image quality is uneven would be an understatement. The picture fluctuates in softness, and the heavy cases hinder fine detail and delineation in many scenes. There are periodic bouts of noise, and this is most noticeable during night shots over the city where the screen crawls with an unsightly cloud of haze. There also is a weird greenish-yellow tint applied to the bottom of the screen in places, which can make skin tones appear jaundiced around the neck and chest areas. Tanya Clarke especially looked sickly when we first meet her, and this is well before she's poisoned. Black levels on the other hand are often nicely deep, but they do slip from time to time with plenty of crushing in shadows. I also counted at least four different hot pixels during the film.

Now the transfer isn't a total bust. There are moments where the flat and fuzzy picture suddenly becomes much clearer with decent depth, more along the lines of what we would expect from high-definition cinematography. However, these instances are still brief and sparsely sporadic throughout the movie.

In the end, the video presentation for 'Death Warrior' is basically like watching the film wearing a pair of novelty drunk glasses, getting glimpses of clarity only when they are taken off momentarily to wipe something out of your eye. 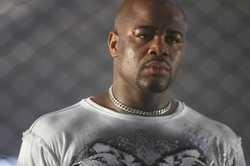 'Death Warrior' comes with a lossless DTS-HD Master Audio 5.1 soundtrack, and like the shabby video, this mix has more than its fair share of unpleasantness.

For starters, this is a heavily front-loaded track. The music, which is more of a repetitive heavy metal thrashing for each fight scene, is very constrained without much room to breathe. Punches, kicks, and other hits during fights are all pretty well identical, almost as if the same "thud" sound effect was just used over and over again. The rear channels occasionally have a presence, although they really only offer discrete crowd ambience during the couple of matches that actually have a physical audience. Dialogue is clean and well-balanced with the rest of the mix, but I notice that it's often accompanied by a faint hissing sound in the background. When looking at the entire package, the audio certainly doesn't help make the movie go down any easier, that's for sure. 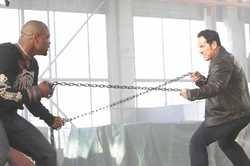 I can't imagine a fanbase even existing for 'Death Warrior' to tell you the truth, but in the off chance our opposite counterparts from the mirror universe someday cross over to our realm, Lionsgate has included a few extras on this Blu-ray. However, the content is still mostly all garbage and in standard-definition no less.

After all of that, I think I'd better end this review on a positive note, particularly for the fact that most of the cast of 'Death Warrior' could put me in the hospital just by flexing their pinkies. So let's go with sitting through this film was such a pleasurable task, I pity those who haven't had the chance to savor the experience. Yeah that works, and any messages that may be hidden within this paragraph are purely coincidental.

Sale Price 7.96
Buy Now
3rd Party 7.73
In Stock.
See what people are saying about this story or others
See Comments in Forum
Previous Next
Pre-Orders
Tomorrow's latest releases