"Gilda, are you decent?" Rita Hayworth tosses her hair back and slyly responds, "Me?" in one of the great star entrances in movie history. Gilda,directed by Charles Vidor, features a sultry Hayworth in her most iconic role, as the much-lusted-after wife of a criminal kingpin (George Macready), as well as the former flame of his bitter henchman (Glenn Ford), and she drives them both mad with desire and jealousy. An ever-shifting battle of the sexes set on a Buenos Aires casino’s glittering floor and in its shadowy back rooms, Gildais among the most sensual of all Hollywood noirs. 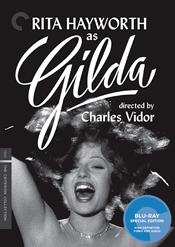 The truly great Hollywood movie stars usually played one iconic part that would forever define them. For Judy Garland, it was Dorothy Gale. For Bette Davis, it was Margo Channing. For Clark Gable, it was Rhett Butler. And for Humphrey Bogart, it was Rick Blaine. Rita Hayworth had one, too, and aside from cementing her reputation as The Love Goddess, vaulting her into superstardom, and changing the trajectory of her career, the role of Gilda in the film of the same name would haunt her personally for the rest of her life. For several decades, the sultry, wanton siren with fiery eyes, a flowing red mane, and a heavenly figure has captivated legions of men who also love her devil-may-care attitude, iron will, and come-hither demeanor. Gilda is the complete male fantasy package, an unattainable angel of sex with a down-to-earth vulnerability that makes her real…and, for Hayworth, impossible to live up to in her daily life. "Men would go to bed with Gilda," Hayworth famously (and wistfully) once said, "but they'd wake up with me.”

‘Gilda,’ however, is far more than a showcase for its title character. Director Charles Vidor’s engrossing tale of repressed desire, dirty dealings, and unrequited love all set against the exotic backdrop of post-World War II Buenos Aires stands on its own as a top-notch film noir. Brimming with psycho-sexual subtext, Marion Parsonnet’s slick script sets up a hyper-Freudian, combustible triangle that’s incredibly racy by 1940s standards. Innuendo and double-entendres (many of them with a homoerotic slant) dominate the dialogue, which is laced with clever, deliciously venomous repartee that’s recited with relish by the accomplished cast. Add a couple of musical numbers, including the immortal faux striptease, ‘Put the Blame on Mame’ (more on that below), and you’ve got a supremely entertaining melodrama that continues to fascinate audiences 70 years after its initial release.

The story is simple on the surface, but simmering with mystery underneath. Penniless drifter Johnny Farrell (Glenn Ford), who proudly makes his own luck, cleans up at a craps game on the Buenos Aires docks shortly after arriving in the city, but before he can slip away with his winnings he encounters debonair businessman Ballin Mundson (George Macready), who runs a posh casino and other nefarious businesses. Ballin takes Johnny (“an opportunist with a boyish grin”) under his wing, and the two quickly become inseparable, developing a strange mutual dependence and intimate bond that seems unbreakable.

“Women and gambling don’t mix,” Ballin says, but he tests the statement’s veracity when he returns from a business trip with a shiny new possession - his bride, Gilda, whom he met and married over a 24-hour period. Like a spurned lover, Johnny is jealous of this sexy interloper who monopolizes Ballin’s attention, but that’s not the only reason he resents Gilda. It soon becomes apparent the two used to be seriously involved. To say the tempestuous relationship didn’t end well may be the understatement of the century, but the bad blood and residual sexual tension between them is so thick even a machete couldn’t cut it.

Still, Johnny favors Ballin over Gilda, and believes his former flame is an insidious cancer that will someday kill his friend. Gilda, however, still holds a blazing hot torch for Johnny, despite passionate professions to the contrary, and the poison they continually fling at each other becomes a curious and potent aphrodisiac. (“Hate is a very exciting emotion,” Gilda suggestively purrs to Johnny.) The two can’t stand each other, but they can’t stand to be without each other either, and their conflicted psyches prey on their tortured souls. Ballin’s association with fugitive Nazis adds gasoline to the fire and further tangles the already twisted loyalties and longings that seem destined to drive the characters to destruction.

‘Gilda’ is rare among film noirs because its femme fatale has a heart of gold not ice, and the love story is fueled by emotion not murder. Yet the feelings bandied about are as nasty as the violence in a vicious crime drama, even if the vitriol is always a thinly veiled come-on. Johnny and Gilda continually pledge their undying hatred to each other with statements like “I hate you so much that I would destroy myself to take you down with me” and “I hate you so much I think I’m going to die from it.” Rarely has the word "hate" been spoken so frequently and with such vehemence - and meant the exact opposite - than in this steamy tale.

Hayworth's memorable entrance, thrusting herself into the frame as she flips back her head and luxurious red hair to expose her beautiful face and bare shoulders, is a classic movie moment, but the film is best known for her seriously sexy rendition of 'Put the Blame on Mame.' Swathed in a jet-black, tight-fitting, off-the-shoulder gown with elbow-high black gloves, Hayworth shimmies, shakes, struts, and gyrates to the jazzy tune about a reckless dame who incites a plethora of natural disasters. She slowly and sensuously removes one of the gloves, evoking a striptease without actually taking anything off, and crafts one of the sexiest scenes of Hollywood's Golden Age.

The 'Gilda' dialogue is wonderfully spirited and laced with wit. "If I'd been a ranch, they would have named me The Bar Nothing," Gilda quips at one point, while Johnny archly opines, "Statistics show that there are more women in the world than anything else...except insects." Yet some of the banter is too preciously constructed. Cryptic questions abound, and Gilda uses Johnny's name to excess, saying it almost as often as Rose says "Jack" in 'Titanic,' which is way, way too much and potential drinking game fodder.

Some may find the convenient ending a cop-out after so much sturm und drang, but that's a minor quibble for such an impeccably constructed film. Vidor embraces all the traditional noir elements and wrings elegant, easygoing performances from his cast, while Rudolph Mate's lush, shadowy cinematography casts a hypnotic spell and shows off Hayworth to her best advantage. She and Ford would make three more movies together after 'Gilda,' but despite high expectations, none would come close to recapturing the combustible magic they create in this deliciously heated, surprisingly spicy love story.

Once you meet Gilda, you won't forget her, and you'll find, just like Hayworth did, that she'll haunt you, too. 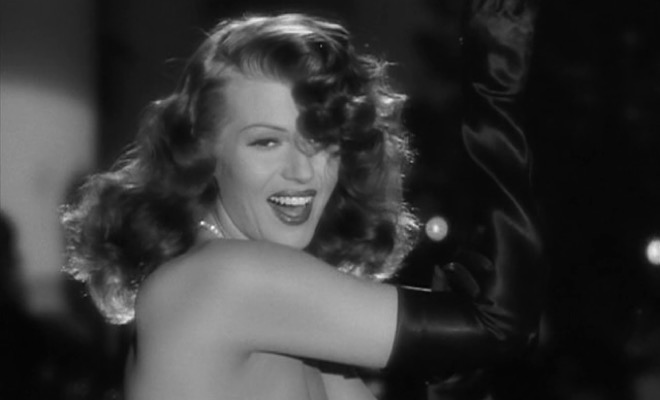 'Gilda' arrives on Blu-ray (at last!) packaged in a standard Criterion case. A fold-out booklet featuring an essay by film critic Sheila O'Malley, cast and credit listings, and transfer notes on one side and a gorgeous blow-up black-and-white portrait of Rita Hayworth on the other (measuring approximately 18"-x-12") is tucked inside the front cover. Video codec is 1080p/AVC MPEG-4 and audio LPCM mono. Once the disc is inserted into the player, the static menu with music immediately pops up; no previews or promos precede it. 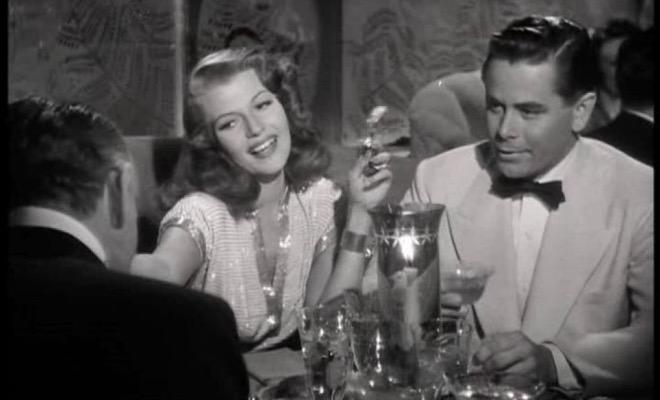 'Gilda' sports a new high-definition digital transfer struck from a 35 mm fine-grain master made from the original camera negative, which lends this film noir classic - impeccably photographed by Rudolph Maté - a lustrous vibrancy it has previously lacked. A few errant nicks and marks dot the source material, but the image remains largely free of blemishes, and its healthy - but not intrusive - grain structure produces a palpable film-like feel. Contrast and clarity are quite good, thanks to rich, inky black levels and a nicely varied gray scale, and sharp close-ups highlight Hayworth's seductive beauty, Ford's swarthy ruggedness, and Macready's pasty, scarred complexion. Excellent shadow detail and crisply delineated silhouettes enhance the noir mood, while easily discerned background elements, rock-solid patterns, and vivid costume textures punch up the picture. (The only downside to all this clarity is that it shines a beacon on the cheap production values that defined Columbia Pictures at that time.) A few print inconsistencies exist, with some scenes exuding a slightly ragged look, but such instances are brief and don't disrupt the film's flow. Though not as bewitching as Hayworth's glamour - or as eye-popping as other noir transfers - this rendering certainly surpasses other 'Gilda' video incarnations and will please those like myself who have waited a long time for this steamy drama's Blu-ray debut. 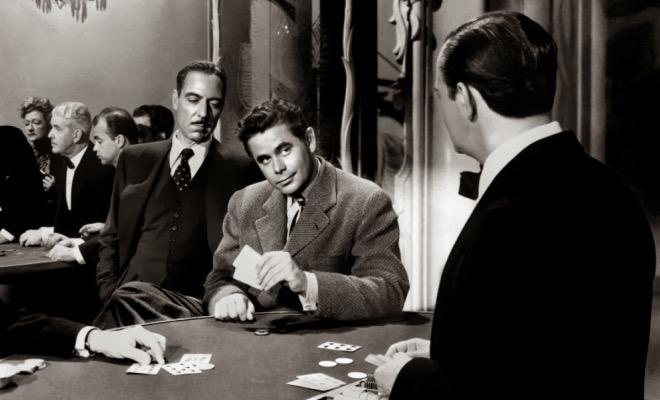 According to the liner notes, "the original monaural soundtrack was remastered at 24-bit from the 35 mm soundtrack negative," and the results are quite good for a film of this vintage. Some mild surface noise can be occasionally detected during quiet sequences, but no pops or crackles mar the presentation. The ambient noise of the casino and Carnival celebration possesses fine presence and detail, and all the dialogue is clear and easy to comprehend. Hugo Friedhofer's Latin-tinged music score nicely fills the room, and a slight level boost enhances Hayworth's two musical numbers, 'Amado Mio' and, of course, 'Put the Blame on Mame.' A wide dynamic scale handles all the highs, lows, and sonic accents with ease, while keeping distortion at bay, and no other anomalies inhibit enjoyment of this straightforward but effective mix. 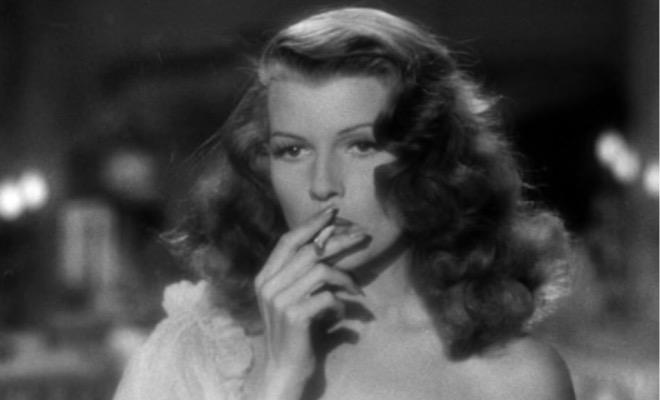 As usual, Criterion includes a potent supplemental package that honors and enhances the feature presentation. 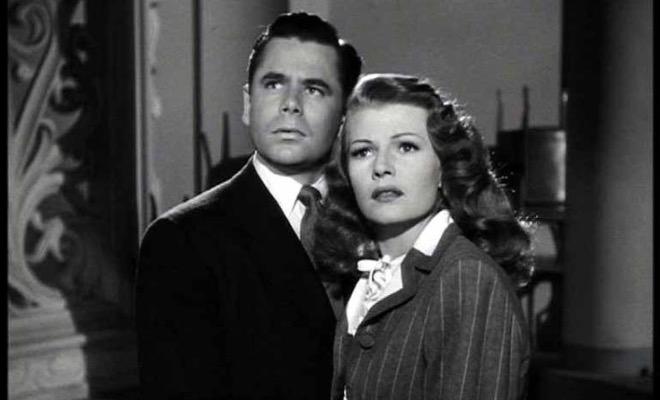 You can't say Rita Hayworth's name without conjuring up images of 'Gilda,' but there's far more to this steamy melodrama than the star's iconic "striptease" to 'Put the Blame on Mame.' Twisted longings, underworld intrigue, an exotic locale, and a bizarre love triangle fuel the film, while strong direction by Charles Vidor, a snappy script, and top-flight performances from Hayworth, Glenn Ford, and George Macready keep its engine humming. Criterion's Blu-ray presentation features excellent restored video, solid audio, and an absorbing array of quality supplements, all of which make the long-awaited high-def debut of 'Gilda' as desirable as the lady herself. Highly recommended.

Sale Price 27.99
Buy Now
3rd Party 27.95
In Stock.
See what people are saying about this story or others
See Comments in Forum
Previous Next
Pre-Orders
Tomorrow's latest releases