A young woman (Meiko Kaji), trained from childhood as an assassin and hell-bent on revenge for her father’s murder and her mother’s rape, hacks and slashes her way to gory satisfaction. Rampant with inventive violence and spectacularly choreographed swordplay, Toshiya Fujita’s pair of influential cult classics Lady Snowblood and Lady Snowblood: Love Song of Vengeance, set in late nineteenth- and early twentieth-century Japan, respectively, are bloody, beautiful extravaganzas composed of one elegant widescreen composition after another. The first Lady Snowblood was a major inspiration for Quentin Tarantino’s Kill Bill saga, and both of Fujita’s films remain cornerstones of Asian action cinema.

For me, Toshiya Fujita's 'Lady Snowblood' marks the official inauguration of cinema's strong, liberated, and self-sufficient female archetype that has now become commonplace throughout film and television. An argument could reasonably be made that the late 70s and early 80s are actually when the model of female empowerment took place, though admittedly, her slow evolution can easily be traced back to the Femme Fatales of 1940s film-noir and Katherine Hepburn comedies. However, before there was an Allen Ripley, Jennifer Hills, Princess Leia or Thana, there was a Yuki Kashima, or as she is better known, Shurayuki-Hime, which is a more violent take on the Snow White name loosely translating to "princess snow of fighting." Granted, Fujita's revenge thriller is also the time of Tina Long from 'Sister Street Fighter,' Frigga from 'Thriller: A Cruel Picture' and when Pam Grier starred as 'Coffy' and 'Foxy Brown.' But it is Yuki's dogged pursuit of the criminals who ruined her life, I would defend, as the true birthplace of the hardened, cold-blooded, badass woman warrior.

Based on the manga by Kazuo Koike and Kazuo Kamimura, Yuki, as played by the seductively beautiful Meiko Kaji, is a fascinating character that wins audience sympathy in the opening moments when she's seen walking through a quiet neighborhood on a dark snowy night. Named Yuki (snow) by her dying mother because she was born under the worst imaginable conditions during a winter storm, the innocent-looking woman, who conceals a katana in her umbrella, assassinates a crime boss and his henchmen without much difficulty and reveals she's a hired professional by local villagers tired of living in the man's tyrannical rule. Her journey to becoming a tool of vengeance and justice is then broken and told in four chapters, each separated by bold lettering announcing each stage in her evolution, in a way suggesting her life as an unwavering, uncompromising force of fate and karma. Raised and trained to be a killer by a priest named Dokai (Ko Nishimura), she hunts the people who murdered her mother's husband and her infant son years earlier before Yuki was born.

Although told in a nonlinear structure, 'Lady Snowblood' is a straightforward and rather conventional story of revenge, or one of tragedy as suggested by the narrator. But beneath its simplicity hides a beautifully complex and engaging tale that hints at ideas on predestination and the illusion of free will. Before she was even conceived, Yuki was born into a predetermined path that ultimately molded her into the steadfast person we see on screen, predisposed and impacted by the destructive sins of others. And Kaji is magnificent in the role of a brutal, callous killer meant to be devoid of emotion, but her brilliant performance is expressed in her eyes, communicating the heavy, wretchedly somber burden of fulfilling a promise to a mother she never knew. In her capable hands, Yuki, sometimes referred to as Asura, an unhappy birth consumed by violence, indirectly and unintentionally attacks traditional female roles, a schismatic, seditious persona Fujita immerses in a gorily violent world that ironically fashioned her into an unavoidable instrument of blood and death. (Movie Rating: 5/5) 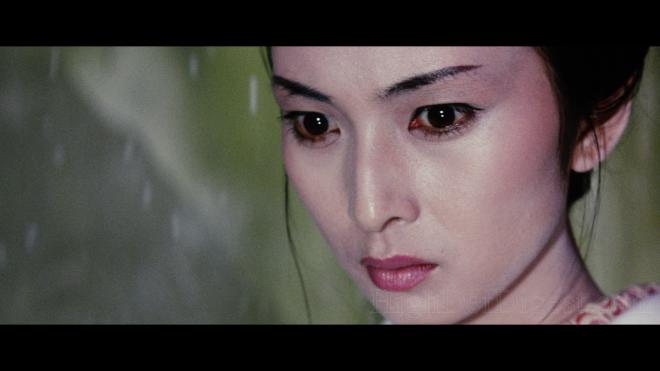 Toshiya Fujita returns with another blood-spraying adventure of his vendetta-driven heroine in 'Lady Snowblood: Love Song of Vengeance.' As if with some awareness of his creation in the previous picture, the opening moments of her tragic journey towards furious retaliation and passionate retribution becomes symbolic of the plot's overall theme. Wishing to be left alone while sitting quietly at a cemetery, Yuki, Meiko Kaji in another superb performance that's deliberately serene yet burning with fiery intensity, is quickly surrounded by men who underestimate her skills and her as a woman. In a fluid long-take shot of her calmly walking away, Fujita shows there isn't a man who can match her deadly proficiency as Yuki easily executes one after the other without missing a beat in her stride, with the same ease one swats away a bothersome fly. Kaji's expression is that of a collected, self-possessed woman in control but also weary of the violent carnage that has consumed her existence. Ending with her coolly drinking from a nearby pond, this beautifully executed sequence reveals a fragile person beneath the hard, tough exterior of a coldblooded assassin.

Although set a few years after the events of the first movie, Fujita essentially picks up where the previous story left off, with our heroine now being the hunted, pursued by authorities for her crimes as a hired killer. In a scene similar to the one above, Yuki, dressed in traditional attire, is surrounded by police who are curiously dressed in more modern apparel — another scene pregnant with meaning and beauty as the ensuing fight is staged against a beach backdrop. An exhausted Snowblood surrenders and soon sentenced to death by hanging, but then rescued by the underhanded Seishiro Kikui (Shin Kishida), the head of the Secret Police in the new Japanese government. The darkly scheming agent offers her an official pardon in exchange for spying on and retrieving an important document from Ransui Tokunaga (Jûzô Itami), a political adversary deemed an enemy of the State. Cut from the same cloth as Clint Eastwood's nameless blue-eyed gunslinger, the sparsely talkative and grim Yuki selfishly agrees but soon discovers her self-interests provide her the choice for redemption, to do right and be a hero to a powerless people.

Like its predecessor, the plot of 'Love Song of Vengeance' takes place in the wake of a major historical incident, and Yuki Kashima's journey of washing away all semblance of her former Lady Snowblood persona is in essence a pilgrimage for self-discovery, of having the freedom to choose for herself the person she wants to be. Told in a familiar reluctant hero tale, her travels are a sadly forlorn and vain quest when confronted by obscene injustices and revolting cruelty by a power-hungry government compelling her to embrace a life she desperately wishes to abandon. Even the possibility of a seemingly serendipitous romance with Ransui's brother, Shusuke (Yoshio Harada), is taken away from her, once again bringing into question notions of fate and predestination. As before, Yuki is an enormously mesmerizing character due to the obstacles placed before her, challenges which transcend gender roles and biases to expose her humanity in spite of a doomed providence. Beneath an exterior air of femininity, a light touch of a demeanor that's deceptive, there is a yearning for a life of tranquility and an autonomous existence free from the bondage of a prescribed role. (Movie Rating: 4/5) 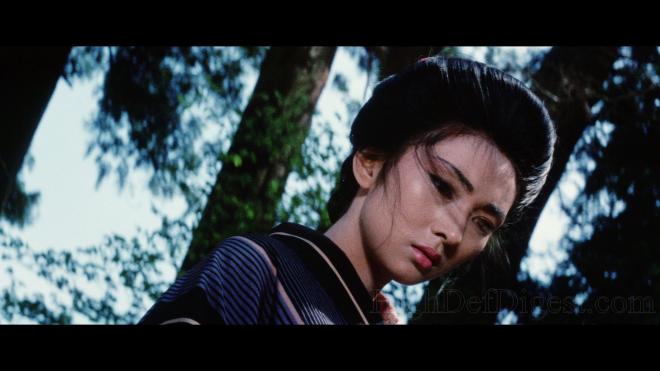 This Blu-ray edition of Toshiya Fujita's 'The Complete Lady Snowblood' comes courtesy of The Criterion Collection (spine #790 & 791) on a Region A locked, BD50 disc and housed in their standard clear keepcase. Accompanying the disc is a foldout, poster-size pamphlet with an attractive original artwork of Yuki Kashima and a perceptive essay entitled "Flowers of Carnage" by author and film critic Howard Hampton. There are no trailers or promos before being greeted by the distributor's normal static menu screen and options where viewers can choose between the two films.

According to information in the accompanying pamphlet, the AVC MPEG-4 encodes of both films were created in 2K resolution from 35mm low-contrast prints newly struck from the original camera negatives. In general, both features are on par with one another and the results are fantastic, especially when compared to the Arrow Video release from 2012.

It's a massive improvement with better resolution and clarity, exposing fine, detailed lines in the clothing and buildings in most sequences and facial complexions come with natural, revealing textures. The few blurry, softer moments are easily forgiven resulting from the photography at the time and the condition of the elements. Colors, in particular, are brighter and full-bodied with lots of vivid, intense reds and glowing secondary hues. Presented in their original 2.35:1 aspect ratios, contrast is well-balanced with crisp, brilliant whites throughout. Only notable concern is the brightness levels. Although blacks are accurate and rich, much of the picture in both is ruined by some crush in the darkest portions and shadows that tend to engulf the finer details. Nevertheless, both films come with a visible layer of grain, giving them an appreciable film-like presentation.

Like the video, Criterion used the same prints made from the original source for creating the audio of this grindhouse classics.

The fantastic Japanese uncompressed PCM mono soundtracks display a surprisingly broad image with a sharply-detailed mid-range where beautifully discrete highs make every whoosh of Yuki's sword and the whizz of the blood spray distinctly audible. One can even hear the clopping sounds of getas on wood floors and the creaking noises of other characters moving inside the buildings. Background activity is clearly audible with excellent acoustical details and sharp, outstanding definition, most notably during the several action sequences. Bass is adequate, as expected for a film of this vintage, but appreciably hearty to provide the score some weight and presence. With intelligible, crystal-clear vocals in the center, this makes for an excellent lossless mix for a pair of long-time and influential cult favorites.

Although an argument could be made in favor of the second half of the 1970s, the 'Lady Snowblood' films, for me, marks the official inauguration of cinema's strong, liberated female empowering archetype that has now become commonplace in film and television. The two are immensely engrossing tales of vengeance and redemption, genuine grindhouse cult classics that have garnered a devoted following and have been quite influential for many generations since. The Blu-ray from The Criterion Collection arrives with an excellent audio and video presentation. Along with a decently nice assortment of supplements, the overall package comes recommended for cult enthusiasts who will be proud to display it in their library.

Sale Price 20.66
List Price 39.95
Buy Now
3rd Party 16.65
In Stock.
See what people are saying about this story or others
See Comments in Forum
Previous Next
Pre-Orders
Tomorrow's latest releases