In a remote desert town, a psychopathic petty crook (Paul L. Smith) and his transvestite girlfriend (David Carradine) kidnap and raise an orphaned infant, cage it like an animal and train it to steal and kill on their command. Years later, when the half-wild Sonny Boy escapes and embarks on a bloody rampage, the couple's monstrous attempt at "child development" provokes the local populace into vengeful retaliation. Unlike any film you've ever seen, Sonny Boy is an unsettling, wildly bizarre allegory on the devastating effects of child abuse and the violent consequences that follow.

With so many movies that come out each and every year, it's understandable that a certain number of these movies slip through the cracks and go unnoticed. Sometimes this is simply because they don't do anything special and an audience fails to notice them, and sometimes it can be because a movie is so strange, so unsettling, that an audience simply doesn't know how to respond to what they're seeing. Robert Martin Carroll's 1989 film 'Sonny Boy' falls into the latter category. A film that is perhaps about 15 years too late to benefit from the 1970s exploitation horror era, 'Sonny Boy' proves to be a bizarrely brilliant and horrific examination of nature versus nurture.

Big man in the small town of Harmony, New Mexico, Slue (the late Paul L. Smith), and his transvestite "wife" Pearl (the late great David Carradine) rule with an iron fist. As a two-person criminal enterprise that consists of ripping off and possibly even murdering passing tourists, Slue and Pearl sell the stolen goods and tighten their grip on the small desert community. Of course, they have a little help in the form of the manic Weasel (Brad Dourif) and the corrupt mayor Charlie P. (the late Sydney Lassick). Under orders by Slue, Weasel rips off the beautiful red vintage Cadillac convertible of a young couple; only to get the job done, he had to put a bullet in their heads. This doesn't bother Slue much since he got the car and can now change the plates, paint, and then sell the car across state lines. What bothers Slue is that there was an infant boy in the backseat!

Pearl, in tune with her motherly instincts, takes to the child and is desperate to raise it as her own. Slue, on the other hand, would rather see the child tossed to the pigs. As the pair spar over what to do with the child, Slue begins to see an opportunity, a means to train not a child but a creature. A creature to do exactly what he says to do - even if that means murder. Through years of systematic torture and mutilation - being dragged behind cars, whipped, burned, and having his tongue removed - Sonny Boy (Michael Boston) is slowly turned into a bloodthirsty, ruthless killer who does what Slue says on command like a trained dog.

As Sonny Boy commits more crimes on behalf of Slue and Pearl, he begins to question who or even what he is. As one crime leads him to kill a truly innocent man, Sonny Boy begins a process of rejecting his animal nature and understanding his place in the world as a human man - even if he doesn't have the ability to verbalize his feelings. When the people in town revolt against Slue and begin a crusade to kill him, Sonny Boy will be forced to face the truth and definitively answer whether he is a man, or is he a trained killer animal? 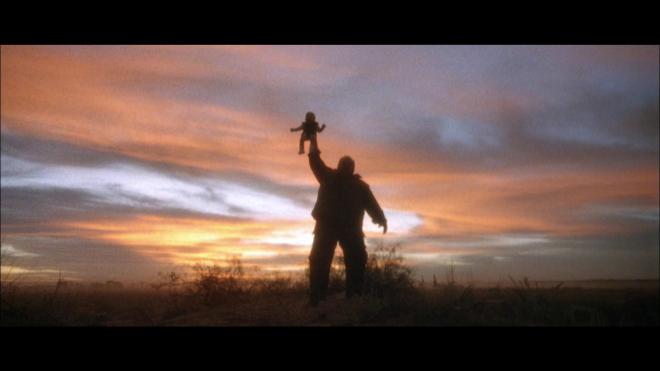 'Sonny Boy' is perhaps one of the most bizarrely, hypnotically beautiful exploitation horror films I have ever come across. As we see Sonny Boy's systematic disintegration from human into an animal, there is a sense of beauty and wonder to what we're seeing. As Sonny Boy is burned in order to endure painful fire scorching or dragged by a car so he can run for miles without stopping, the sweet and innocent score by Cario Maria Cordio plays over these moments and we hear Sonny Boy's internal voice coming to understand that what is happening is actually good for him - or at least, he believes that it's good for him because it makes Slue happy. It's a series of horrifying and beautiful scenes that made me feel like I was watching an exploitation film version of 'Frankenstein' as directed by Terrance Malick and written by Cormack McCarthy. 'Sonny Boy' has a brutal beauty to it that is equally captivating and repulsive.

Central to 'Sonny Boy' are the impressive performances. As the patriarch of this twisted family, we have Paul L. Smith as Slue. Smith delivers a subdued and sinister performance as a deranged criminal mind whose designs are only ever fully revealed once the plan is in motion. As the matriarch, David Carradine is simply amazing as the transvestite Pearl. It's not altogether clear if her relationship with Slue is sexual of if she is just a complicit companion in Slue's schemes, but Carradine provides one of his best performances. He plays an innocent and caring mother in this twisted family drama. She bucks Slue's authority when and where she can - especially if it means sneaking food to Sonny Boy, but she's also hopelessly powerless to prevent Slue from doing anything he sets his mind to. It's also worth mentioning he wrote and performed the film's title song "Maybe It Ain't." Then we come to the titular Sonny Boy, Michael Boston. It's difficult to assess his performance because it's relatively speaking a silent role. He can only muster up a series of grunts to communicate with people; anything we hear him say is all internal monologue. As far as silent roles go, the man does a fantastic job here conveying an inner turmoil over his actions whether they're good or bad. Last but not least I have got to give a shout out to Brad Dourif. This is just another piece of work that show's the man is a singular talent and one of the best character actors in the business.

As a piece of exploitation cinema, 'Sonny Boy' may prove to be too languid and contemplative for some. This is especially true since a number of the horrible things done to Sonny Boy are implied rather than explicitly shown on screen. So horror hounds looking for fountains of blood pouring out of bodies in slow-motion will most likely be disappointed by this one. On the other hand, if you're looking for a more thoughtful look at the making of a monster and whether or not that monster has a soul, then 'Sonny Boy' should be a solid fit for your viewing pleasure. This was a film that'd I'd only ever heard of before going into the viewing. I simply knew of it as "the movie where David Carradine dresses up as a woman." I was very happy to discover that 'Sonny Boy' is a lot more than that simple summation.

'Sonny Boy' arrives on Blu-ray thanks to Scream Factory and is pressed on a Region A locked BD50 disc. Housed in a standard Blu-ray case with reversible cover artwork, the disc opens to the standard studio intros before arriving at a static image main menu featuring traditional navigation options.

'Sonny Boy' arrives on Blu-ray with a very good if slightly aged-looking 2.35:1 1080p transfer. Much of the film maintains a dreamlike haziness to it with the effect of muting some details and colors in the process. This effect isn't always in play and much of the image provides an outstanding film-like presentation with a subtle but visible grain structure throughout. Colors look bright and bold with plenty of primary pop. Look at Slue's navy blue jumpsuit or the ever-changing dresses Pearl wears. Blood also has a thick, crimson red to it that stands out nicely against the desert scenery and never looks too "orange." Black levels are also very strong most of the time allowing for a pleasing sense of depth to the image. Where this movie has a little trouble is in the department of damage. There is some very slight speckling throughout the run of the film and I noticed at least two incidents of staining on the print that only lasted a couple seconds each time. For a film that hardly lasted in theaters more than a couple of weeks and was even feared lost for a time, this is a fine transfer and better than I would have expected to be honest.

With a DTS-HD MA 2.0 audio track, 'Sonny Boy' maintains a strong auditory presence throughout the film's 96 minute run time. Dialogue is crisp and clean and never a trouble to hear. The tack offers up just enough imaging so that any given scene has a sense of movement and directionality to it. Much of the film is actually very quiet, ponderous with the beautiful music by Cario Maria Cordio playing in the background. The film really picks up steam in the last act during the attack on Slue and Pearl's compound where guns and cannons thunder away. These blasts of gunfire and explosions have a splendid resonance to them and push the lower registers nicely. Levels are also very well balanced as some of the sudden volume and intensity shifts. Free of any age-related issues, this is a fantastic audio track that does the film a lot of auditory justice.

Audio Commentary: Director Robert Martin Carroll and his wife Dalene Young provide an engaging and very informative commentary track. Dalene was an actress in the film and also did some uncredited rewriting on the script. It was really interesting to learn that few members of the cast actually had an understanding of what was happening and what they were shooting or even why for that matter but they trusted their director to make sense of it.

Audio Commentary: Writer Graeme Whifler with moderator Matthew Chernov provide a fantastic commentary for the film. Chernov keeps the questions flowing allowing Whifler to answer the questions but also talk about any particular scene that was happening on screen.

Considering that this film was feared "lost" due to its bleak theatrical reception and lack of home video presence, it's actually a little bit of a miracle that we're even able to see 'Sonny Boy' at all let alone in such great shape. The film is a bizarre exploitation horror film that is far more contemplative than would be expected for a film that could have wound up being a cheap genre gore gallery of torture. I found it to be a mesmerizing little flick featuring some fantastic performances from its lead cast. Scream Factory has done a heck of a job bringing 'Sonny Boy' to Blu-ray with a very good HD video presentation with a very strong audio track. A pair of stellar commentary tracks round out the extra features making 'Sonny Boy' a recommended Blu-ray release.

Sale Price 49.96
Buy Now
3rd Party 28.86
In Stock.
See what people are saying about this story or others
See Comments in Forum
Previous Next
Pre-Orders
Tomorrow's latest releases