Snipers. Marksmen. Hired Guns. Double Agents. A group of exiled rebels are planning a hit on an Army Commander in Japanese-occupied Korea, but the only killer for the job is in prison. Now, the Resistance must devise a jailbreak, escape a hitman...and discover which of them is a traitor.

The use of historical events is a great way to enrich a relatively simple story. Films that use real events as a backdrop are nothing new, but when done well you can get some pretty wonderful storytelling with compelling characters and amazing visuals. 'Assassination,' directed by Dong-hoon Choi uses the Japanese occupation of Kora during the 1930s as a backdrop for a wild and intricate action film. The visual spectacle is on display, however, a deluge of characters and a lack of context for certain events holds the film back from being truly great.

As Japan tightens its grip on the whole of Korea, the people of that nation have one of two choices, fight or capitulate. For Kang In-gook (Lee Geung-young), being a prosperous business man is above all else the most important part of life for him. Regardless who controls the world as he knows it, working with the Japanese is far more prosperous than working against them - even if that means assassinating his wife who works with the underground resistance movement. This obedience is something of a pleasure for the Japanese governor Kawaguchi Shunsuke (Park Byung-eun) who has been tasked with ensuring control over the Gyeongseong territory of Korea.

Although it lays in shambles, the Korean government isn't entirely out of the fight. As they have painted targets on the backs of Kawaguchi Shunsuke and Kang In-gook, the Korean government has hired an elite team of criminals in order to perform the perfect assassination. At the head of this plan is Yeom Seok-jin (Lee Jung-jae). He will bring into the fold an imprisoned sniper by the name of Ahn Ok-yun (Jun Ji-hyun), an arms dealer by the name of Chu Sang-ok (Cho Jin-woong) and a demolitions expert known as Hwang Deok-sam (Choi Deok-moon).

When the team arrives in Gyeongseong, their mission becomes all the more deadly. It would appear that the Japanese have planted a mole operative into the team and that individual is feeding the enemy all of their closely guarded plans. But who could it be? Finding out the identity of the traitor becomes a high priority when a hired gun by the name of Hawaii Pistol (Ha Jung-woo) and his lackey Old Man (Oh Dai-su) arrive in Gyeongseong to take out the Korean assassins. 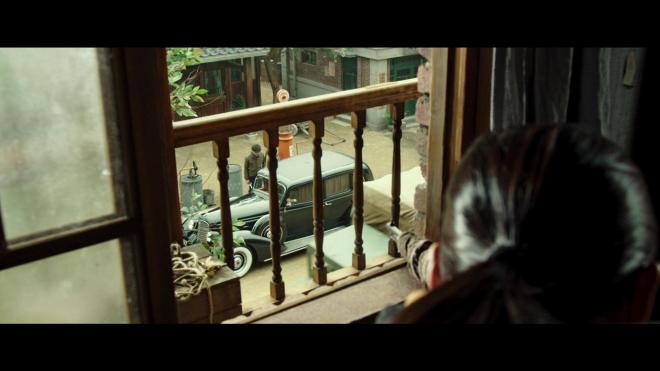 For a movie that runs nearly an hour and forty minutes, 'Assassination' is at times entirely too long, and then not long enough. Part of the issue is the disjointed timeframe. The film starts in 1911, jumps to 1949, and then skips back sixteen years to 1933 where the bulk of the movie takes place. All of that jumping around in time periods is supposed to provide a sense of context to the happenings and goings on, and to a certain respect there is a through line of the story that pays off by this, but it isn't central or necessary to the assassins, their mission, their betrayer, or the two men hired to gun them down. I appreciate that the movie tried to explain some of the things that were happening by jumping around history like this, but when you get right down to the nitty-gritty of it, a simple title card at the beginning explaining things would have been far more efficient and would have freed up some more run time for the real main story.

As a film that is in its essence a spy thriller, 'Assassination' works well. The character interplay by the central cast of Lee Jung-jae, Jun Ji-hyun, Cho Jin-woong, and Choi Deok-moon is pretty great and the film does a fantastic job setting up their relationship. This works because once the rat in the group is exposed, it actually feels like a punch to the gut and the actors pull it off perfectly. On the flip side, it's a hell of a lot of fun to watch Ha Jung-woo's Hawaii Pistol and his cohort Oh Dai-Su as Old Man work side by side. They're vicious and lethal characters, but at the same time, there is a lot of fun to be had watching these two do their thing.

Taken as a whole, 'Assassination' works, but it has its issues. It has plenty of well-shot action sequences that build and build creating a fantastic amount of suspense and excitement. If that was enough, 'Assassination' would have been a pretty great flick. I've never been a believer of the "perfect movie," but 'Assassination' has some notable story structure flaws working against it that will test the patience of the audience. If you're able to get through the seemingly pointless and jumbled time hopping of the front end, the latter half is a decent enough reward. Had this film not been so convoluted at the outset, we potentially could have had another classic work of Korean action filmmaking on our hands. As it stands, it's just pretty good and certainly worth looking at.

'Assassination' or 'Amsai' as it's known as in the rest of the world arrives on Blu-ray thanks to Well Go USA and is pressed onto a Region A locked BD25 disc. Housed in a standard case, the disc opens to an animated main menu.

Continuing Well Go USA's tradition for providing high-quality transfers for its Asian Market imports, 'Assassination' exhibits a beautiful 1080p 2.39:1 image. Shot digitally, the film looks immaculate offering an abundance of fine detail to appreciate. It's a real treat when you can pause just about any scene in the film and just soak up the impressive costuming, makeup, and set design work. Colors have a slightly muted, olive-green push to them favoring grays and deep greens. Yellows also have their place, but blues and reds are a bit tamped down at times. The color grading works in the context of this film, but in some scenes it can leave flesh tones for some of the cast looking a bit peaked. Black levels are spot on with strong shadow separation creating a nice sense of three-dimensional depth to the image. The only real detraction I have, and this is stretching things a bit, is the use of CGI backdrops. When these moments pop up, compared to the foreground action they're noticeably smeary and flatter looking and this impressive resolution and detailed presentation only brings those faults into focus. Still, 'Assassination' enjoys one heck of an impressive transfer and fans of the film should be very pleased with this Blu-ray.

Boasting a Korean language DTS-HD MA 5.1 track with English subtitles, 'Assassination' is an absolute auditory delight. There is a lot of hustle and bustle happening in each scene with tons of background and surround elements in play - so your surround system should have a fun time. Dialogue is crisp and clean and stays largely front/center. All of the elements from the sound effects to the film's wonderful score are given plenty of space to breathe creating a richly resonate track. The track keeps to the midranges letting the film's score pull up the lower tones. Levels are also spot on for the most part and only once or twice was I compelled to adjust my volume. All in all this is a pleasingly immersive audio track that even with an extreme nitpicking ear I was hard pressed to find any notable fault worth mentioning.

Original Theatrical Trailer: (HD 1:40) A decent enough trailer that works to get your attention, but being the only extra feature is a real shame.

'Assassination' may not be the greatest spy/thriller/action-adventure movie out there, but it proves to be a worthwhile watch. The film has many strong points, including a compelling story and a strong cast, the only thing holding it back is a rough opening act that was far more confusing than was necessary to tell a simple story. Well Go USA has done a pretty good job pulling together an immaculate A/V presentation for this Blu-ray release. The real drawback is a lack of meaningful extras. 'Assassination' is certainly worth a look for the curious, if you're a fan of the film already, consider this Blu-ray recommended.

Sale Price 15.02
List Price 29.98
Buy Now
3rd Party 8.99
In Stock.
See what people are saying about this story or others
See Comments in Forum
Previous Next
Pre-Orders
Tomorrow's latest releases