Cherry Falls will leave you wondering if you should giggle or scream for help. A fiendish take on the teen thriller genre, where there's a method to a killer's madness, and only one naughty way to insure you're not the next victim. Dark secrets, darker motivations, and the blackest humor ever run wild in this send-up of horror films, where it's not always the innocent who survive.

I was born in 1982, so I was pretty much raised in the era of the Slasher Film. Thanks to a local television station, I was able to watch all of the most recent  'Halloween,' 'Friday the 13th,' and 'A Nightmare on Elm Street' movies at a very young age. The sight of a masked killer or signature franchise villain dispatching amorous teens over the course of multiple movies was as common to me as catching episodes of 'Teenage Mutant Ninja Turtles' after school. This is why whenever a new slasher movie comes my way, I get a little excited because I hope to recapture that sense of nostalgia. In 2000, 'Cherry Falls' by director Geoffrey Wright was released and with a unique story hook, the film had piqued my interests and it certainly provides some fun, but a hammy ending derails the show in the home stretch.

Life in Cherry Falls is calm, quiet, and simple - just like any other small American town. Jody Marken (Brittany Murphy) goes to high school, gets decent grades, and has dated the same boy, Kenny Ascott (Gabriel Mann) for over a year, and things are getting serious between the two. Her father Brent (Michael Biehn) is the local town sheriff so he's done what he can to protect his daughter, but even he recognizes that teens need some space to grow up on their own terms. Brent is okay with the prospect of his daughter potentially being sexually active, that is until two teens are brutally murdered while necking in the back of a car.

After a third murder turns up, a pattern starts to emerge, each of the victims were virgins. Boys and girls alike, somehow the killer had an intimate knowledge of these kids' personal lives to know who is and is not sexually active. Tom Sisler (Joe Inscoe) the school principal and popular English teacher Leonard Marliston (Jay Mohr) do what they can to fill in the gaps about the murdered kids, but it becomes clear to Brent that something far more sinister, possibly something involving his past, is at work here. When the town learns of the connection between the victims, the high school boys and girls decide to throw a "Pop Your Cherry" party in order to protect themselves.

While her peers are planning to protect themselves through sex, Jody is more interested in discovering the true identity of the killer. Together with Kenny, she starts uncovering some of the dark hidden secrets of Cherry Falls. With the maniac murderer lurking around, Jody gets too close and ends up putting her life in danger while her father is forced to confront his own demons. When the past comes to light, not even being sexually active is enough to keep the teenage kids of Cherry Falls safe. 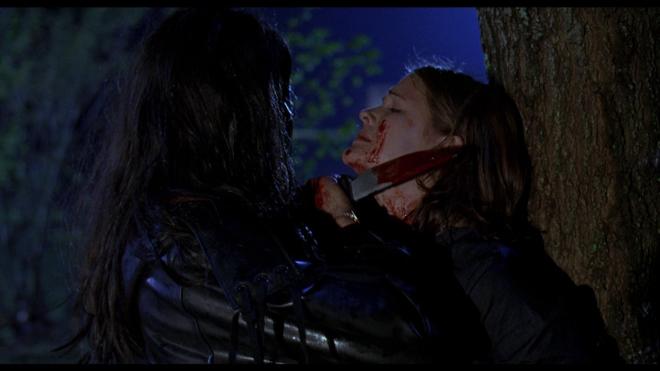 What makes 'Cherry Falls' a fun watch is that it takes a number of genre conventions of slasher movies and organically satirizes them. I've often heard this film compared to 'Scream' and other than it being a slasher movie that is a bit self-aware, the comparison should stop there. 'Scream' was a movie that was more focused on satirizing the films of the genre rather than the inner workings of what made those movies tick. As the film build suspense with the Sheriff and Jody's parallel investigations, the movie is making fun of the notion that this sort of film is nothing but young teens having sex getting killed off in glorious gory ways. It's a sly film that works incredibly well up to the point that the killer's identity is revealed where the sense of humor goes from being subtle to outright silly.

So much of 'Cherry Falls' works that the killer's big reveal - don't worry I won't spoil it - feels like a piece of convenience rather than something that actually works. After the killer is exposed and holds Jody and her Father captive, we're treated to about ten minutes of extensive exposition to explain everything that happened before the events of the movie. As this course of exposition goes on, it just gets sillier and sillier and when it comes time for an escape attempt, the movie just becomes a full on comedy. So much of the film was a solid horror picture right up to the end that it's hard not to feel a bit cheated. It's difficult to discuss without covering some spoilers, but I'll sum it up that the end just feels rushed with lazy story telling. The final film itself is still pretty good and worth a watch, but it's hard to shake the feeling that it could have been better.

'Cherry Falls' arrives on Blu-ray thanks to Scream Factory. Pressed onto a Region A locked BD50 disc, the disc is housed in a standard Blu-ray case. The disc opens to an animated main menu featuring traditional navigation options.

'Cherry Falls' makes an excellent Blu-ray debut with this 1.85:1 1080p HD transfer. From the get go, the amount of appreciable detail is a standout factor as is the impressive sense of depth. So much of the film takes place in dark locations or at night that the film still maintains a sense of dimension without losing detail. Film grain is apparent but stable and never becomes too noisy. Colors skew slightly darker and cooler to replicate a fall season feeling, but primaries have plenty of pop and presence to them - especially crimson blood colors. As I mentioned Black levels are rich and inky and contrast levels are stable without any blooms. The print sourced for this transfer is in fantastic shape with only a moment or two of speckling. All around this is a pretty great looking transfer and fans should be happy.

'Cherry Falls' comes with a solid DTS-HD MA 2.0 stereo audio mix as well as a DTS-HD MA 5.1 surround mix. Both tracks serve the nature of the film well but I tip my hat to the 5.1 mix over the 2.0 stereo audio track. This is a movie that has a lot of space and dimension to it and the 5.1 mix really helps create a consistent spacious tone that makes you feel like the killer could be anywhere. The 2.0 mix has this effect, but it's just not as strong as the 5.1. Dialogue comes in front and center and is clear and easy to hear for both the 2.0 and 5.1. There is a nicely subtle sense of imaging as the film takes its time and lets silence do its job to work up some of the tension. The score by Walter Werzowa fills a lot of the silent stretches without being intrusive to the rest of the mix. Levels are set just right for both audio tracks and I didn't ever have the need to adjust my volume.

Audio Commentary: Director Geoffrey Wright provides a solid solo commentary track for this film. It's a solid commentary and he provides a lot of information about the production, the various troubles it encountered as well as talking about the untimely death of actress Brittany Murphy, what it was like working with her and the rest of the cast. He even talks about some in-jokes that he worked into the film lampooning his previous directorial effort the much maligned 'Supernova.'

Lose it or Die The Untold Story of Cherry Falls: (HD 24:30) Writer Ken Selden and Producer Marshall Persinger go into a lot of depth about the genesis of the project, the making of the film. Some really cool material here.

Cherry Falls Deputy: Amanda Anka: (HD 7:40) Actress Amanda Anka gives a lot of fun tidbits about the making of the movie, the audition phase and what it was like working with Director Geoffrey Wright.

Behind The Scenes Footage: (SD 4:32) This is some pretty standard on set footage that looks at one of the chase sequences of the movie.

'Cherry Falls' was a movie that had earned a bigger theatrical release in foreign markets but was sadly dropped direct-to-video here in the United States. It's a better movie than most people would expect, but the timing with other horror franchises doing a similar slasher satire vibe probably hurt its marketability. In spite of the goofy ending, I still dig this movie and am glad to see that it has aged so well. Scream Factory has done a bang up job bringing 'Cherry Falls' to Blu-ray with a solid A/V presentation and a bunch of worthwhile extra features to pick through. Fans should absolutely consider a purchase, for all others 'Cherry Falls' on Blu-ray is recommended.

Sale Price 14.99
Buy Now
3rd Party 16.43
In Stock.
See what people are saying about this story or others
See Comments in Forum
Previous Next
Pre-Orders
Tomorrow's latest releases