In 1921, Jimmy Gralton's sin was to build a dance hall on a rural crossroads in an Ireland on the brink of Civil War. The Pearse-Connolly Hall was a place where young people could come to learn, to argue, to dream….but above all to dance and have fun. As the hall grew in popularity its socialist and free-spirited reputation brought it to the attention of the church and politicians who forced Jimmy to flee and the hall to close.

A decade later, at the height of the Depression, Jimmy returns to Co. Leitrim from the US to look after his mother and vows to live the quiet life. The hall stands abandoned and empty, and despite the pleas of the local youngsters, remains shut. However Jimmy reintegrates into the community and sees the poverty, and growing cultural oppression, the leader and activist within him is stirred. He makes the decision to reopen the hall in the face of what they may bring….

When you've got a country like Ireland, you have a land full of rich, turbulent history that is a goldmine for great cinematic content. You could cover Cromwell, the potato famine, Tom Cruise moving to the United States in search of free land, the possibilities are virtually limitless. So when it came time to tell the story of Irish freedom fighter Jimmy Gralton, a fantastic movie should have erupted from the fertile topics of religious fanaticism, communism, socialism, the drive for freedom of speech, and salacious Jazz dancing in the early 1920s. Unfortunately, under the care of director Ken Loach and screenwriter Paul Laverty, a truly compelling and rousing film fails to emerge.

Because of the rampant political changes gripping Ireland, Jimmy Gralton (Barry Ward) was forced to flee his homeland and live in exile in America. His only crime was helping to open a community hall that wasn't run by the stern Catholic traditionalist Father Sheridan (Jim Norton) or the local politicians headed by the fascist Commander O'Keefe (Brian F. O'Byrne). The hall was a place where everyone was welcome to come and learn how to paint, write poetry, and even have a fun dance in the evenings. Because these socialist activities were being squashed out at a political level, Jimmy was put in the crosshairs and had to leave his family and his true love Oonagh (Simone Kirby).

Ten years later and Jimmy has come home having set aside his political ways in order to care for his aging mother Alice (Aileen Henry) and lead a simpler, calmer life. What he didn't expect to experience was the rampant poverty and unemployment and its grip on the working people in his old community. With few jobs and even fewer opportunities for these people, it isn't long before Jimmy is called upon to reopen the hall just so the people have a place where they can go to learn and do something constructive with their time.

As soon as the hall opens and threatening activities like Jazz dance, art, and writing start being taught to the people again, Father Sheridan and Commander O'Keefe make their respective disapproving presences felt. As Jimmy's community hall becomes more popular, these fanatical fascists become more determined and resort to brutal tactics in order to bully and intimidate anyone who dares enter the hall in order to prevent any sort of communist uprising. What O'Keefe and Sheridan fail to realize is that the human spirit is beyond the definitions of political parties and can't be controlled and these men aren't prepared for the iron will of Jimmy Gralton and his friends and followers. 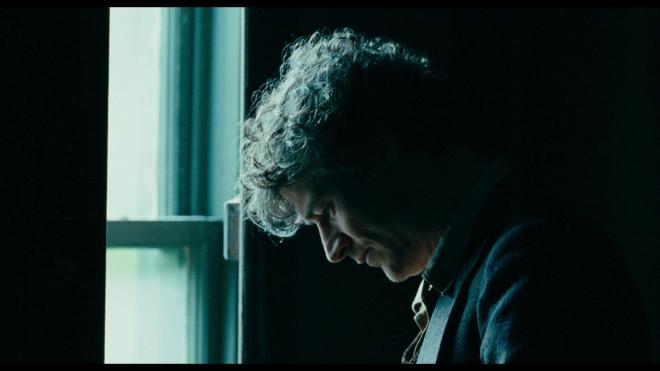 While 'Jimmy's Hall' opens with some title cards stating the political climate of Ireland in the 1920s, how the country was coming away from a war for independence from England and then a civil war, the film ultimately doesn't do a strong enough job at introducing characters. This is a film that unless you're already steeped in the lore and the history of the events that surrounded Jimmy Gralton opening, closing, and reopening the community hall, you may have a tough time working up any genuine enthusiasm for the story.

We're introduced to Jimmy as a worn out man returning home from exile in order to care for his family, but we're not ever really given a reason to care for him. When the local youth call upon Jimmy to reopen the community hall, we don't really understand why that is such a big demand nor do we really understand why it is a weighty decision for Jimmy. Only through some sparse flashbacks that again, unless you know your Irish history, do we know the history of events. Unfortunately, these flashbacks don't really paint a picture of desperate times nor do they convincingly explain why Jimmy had to flee to America in the first place. This is where story structure really holds this film back, had some of these scenes arrived in the front end of the film we would have had a better sense of the roles these people played in a historical context beyond this surface battle between fascists and communists/socialists.

To the range of the portrayals and performances within the film, the cast is fine. Barry Ward plays a convincing enough folk hero type, Simone Kirby does well as a dedicated mother and wife of another man who is still in love with Jimmy, and Jim Norton is always great so he plays a convincing Catholic priest with a political ax to grind. The problem for all of these fine actors and their respective characters is that they're so one-note and written to an archetype that they never emerge beyond what the script calls for. They never become unique characters you become invested in. As an audience, we're told to care because that's what we should do because they're standing up for freedom - but the film doesn't demonstrate a level of likability or characterization beyond a thin level of "this is the good guy and this is the bad guy" exposition. I wish that Director Ken Loach and his creative team could have filled the movie with some more character nuance so that it wouldn't have been so archetypal black and white.

The shame of watching a movie like 'Jimmy's Hall' is knowing that there is a great story that would have made a fantastic film that people could be shouting "Oscar!" from the rafters over. Unfortunately, that movie isn't here. 'Jimmy's Hall' is one of those movies that is just okay. It's not bad, but it's not great either. You could sit through the film's almost two-hour runtime and not feel like you wasted your evening, but at the same time it isn't entirely satisfying either. It's just a mediocre movie that once you realize you're essentially watching a historical and politically-charged version of 'Footloose,' it's hard not to feel a little let down by the time the end credits run.

'Jimmy's Hall' offers up the type of deliciously beautiful 1.85:1 1080p transfer that makes owning and investing in a quality HDTV worth the price. When the film pulls back and you're able to get a look at the misty green rolling hills of Ireland, you feel like you're watching a travel commercial and wish you were there. Detail levels for this film are exquisite throughout offering up plenty of fine details for facial features, the drab and destitute clothing many of the characters wear, and as mentioned previously, the incredible Irish landscapes. Colors are robust and beautiful offering the right amount of primary pop, especially greens. Indoor scenes take on a pleasant golden hue of the period lighting and flesh tones appear accurate. Black levels are rich and inky and provide a strong sense of three-dimensional depth.

With a solid DTS-HD MA 5.1 audio mix, 'Jimmy's Hall' has a lot of auditory life. The movie maintains a largely conversational and quiet nature that fits the rural Irish countryside setting of the film. Dialog is crisp and clean and never a trouble to hear - that is unless of course you have a tough time understanding thick Irish accents. The track demonstrates a fine sense of atmosphere and space, from the larger street scenes to Jimmy's mother's cozy kitchen table, to the community hall. Elements have plenty of space allowing for a clear presentation without any distortion or sudden drop-offs. Imaging is effective if a bit passive at times. The surround channels are frequently engaged, but it subtitler, more atmospheric ways rather than in or your face sound effects bombarding you from all sides. This track may not rattle the walls, but it gets the job done in fine order.

Audio Commentary: Barry Ward and Simone Kirby do a fine job with this commentary. They're given a nice opportunity to discuss the film, the history involved with the story and their influences for how they presented their characters. It's a little light on the "making of" side of things since that wasn't their focus of involvement so their approach is a bit more anecdotal than procedural. Still a fine listen if you're so inclined.

Deleted Scenes: (HD 7:32) Some fine character scenes that I wish had made it into the final cut. They're not full of story revelations, but they're solid moments that actually work to help you draw firmer connections to the characters.

The Making of Jimmy's Hall: (HD 34:44) I wish more making of features were as in depth like this one. From the cast to the crew to the people involved in the actual story or relatives of the real characters, we get to see and learn a lot about this film and how it came together. Provides a lot of historical context as well as relevant production information.

'Jimmy's Hall' is one of those movies that neither good nor bad, it's just mediocre. You've probably seen a dozen movies that tell a similar story, so it's a shame this one didn't come together as well as it could have considering the historical context of the central character and time period. Sony Pictures Classics has done a splendid job bringing together this Blu-ray that features a near-flawless A/V presentation as well as some worthwhile extra features. Fans of the film should be pleased to make this purchase, but if you've never seen it before, consider a rental first to make sure the film is your flavor.

Sale Price 11
List Price 25.99
Buy Now
3rd Party 11
In Stock.
See what people are saying about this story or others
See Comments in Forum
Previous Next
Pre-Orders
Tomorrow's latest releases