Disgraced World War 2 Army Captain Jack Wosick (Luke Goss) is given the opportunity for redemption when asked to lead a rag-tag unit of misfits known as the War Pigs on a secret mission to go behind enemy lines to uncover and capture a Nazi developed Super Weapon the V3, a massive artillery canon that would give the Nazis an insurmountable advantage against the Allies. With the help of Captain Hans Picault (Dolph Lundgren), a German Anti-Nazi serving with the French Foreign Legion and Colonel AJ Redding (Mickey Rourke), a battle hardened WW1 veteran, Jack must train, lead and earn the respect of his new squad to become a functioning reconnaissance unit.

Sometimes a low budget can prove to be the source of limitless inspiration for a filmmaker. They can use that slim dollar margin to spur creativity and fuel a film to glory. Other times, a film can wear a low budget on its sleeves. 'War Pigs,' directed by Ryan Little and starring Luke Goss, Dolph Lundgren, Mickey Rourke, and Chuck Liddell falls into the latter category. This is a movie with such a small budget that it forgets that it's supposed to be a movie.

Captain Jack Wosick (Luke Goss) is in disgrace. He once had Lieutenant's bars adorning his uniform, but after a botched mission where his entire company was killed by Nazi's, he was demoted. Not that Jack did anything wrong mind you, he was simply following orders based on bad intel and was the one punished during the Army's intricate process of buck passing. Maj. A.J. Redding (Mickey Rourke) knows the truth so he's giving Jack a command to redeem himself - Jack is being put in charge of the War Pigs. With the German-born French Foreign Legion officer Captain Hans Picault (Dolph Lundgren) at his side, Jack is going to have to retrain this ragtag group of men if they have any hope of destroying the Nazi's new secret weapon.

If you're starting to feel like you've seen 'War Pigs' before, that's okay, you have. Take the original 'The Dirty Dozen' grind it together with its television sequels 'The Dirty Dozen: Deadly Mission / Fatal Mission,' run the mixture through a used coffee filter and you essentially have 'War Pigs.' It's hard to call this movie a "bad movie" or a "good movie" when it doesn't really do anything at all.

After a strong start, in which we get to see Luke Goss' Captain Jack (not Sparrow) lose his best friend McGreevy (Chick Liddell), the rest of the movie spirals into predictability and routine. Because Jack is in command of a bunch of disgruntled disgraced soldiers, he has to train them all over again. That would be fine if their training wasn't such a slog to get through and any attempts at humor during this process just fall flat as a pancake. If this sequence was just a few minutes, it may have been something, but it's virtually the entire second act leaving very little time of already short 88-minutes to pull off their daring raid behind Nazi lines in a way that is genuinely exciting and not a barrage of digital gunfire. 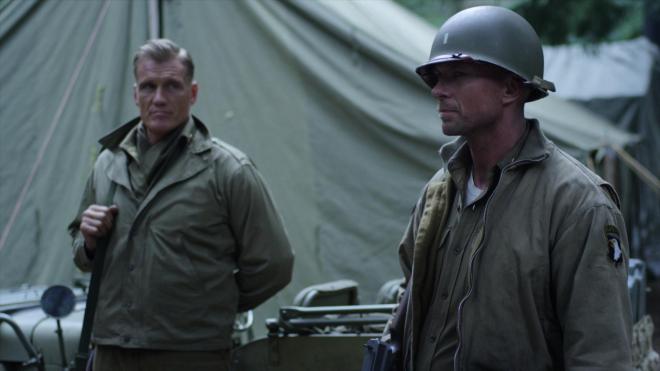 You also can't really critique or commend performances when everyone is just going through the motions. Luke Goss looks like he's trying but there's really nothing for him to do. Dolph Lundgren looks like he's waiting for the next 'Expendables' script to arrive and Mickey Rourke doesn't even bother to take his designer cowboy hat off for a WWII period movie. Noah Segan makes a half-way entertaining turn as the delinquent Pvt. August Chambers but the rest of the squad has so little chemistry or connection that even he can't salvage his slim role.

It may seem like easy pickings to dissect a movie like 'War Pigs' - there is some truth to that - but when you have a film that is essentially another film's screenplay with the title crossed out, it's hard to be in a forgiving mood by the time the final credits role. Had this flick had a few more bucks to work with, it could have been something, but since so much time is spent trying to inject humor into the interminably long training sequence there's little excitement or fun to be had with this one.

'War Pigs' arrives on Blu-ray courtesy of Cinedigm and is pressed onto a Region A locked BD25 disc with a DVD of the film as well. This two-disc set is housed in a standard double-disc Blu-ray case with slip cover. The Blu-ray opens directly to the main menu.

While 'War Pigs' certainly won't be winning any awards for its visuals, the 1.78:1 1080p transfer for this disc actually is very good looking. Shot throughout Utah, the film makes great use of the mountainous scenic locations so there is plenty of pretty scenery to look at. Detail levels are spot on allowing the audience to appreciate that they tried to create an accurate looking WWII action film. Colors are warm favoring golden tones. Primaries appear accurate although reds can look a hair too dark. Flesh tones look accurate and uniforms have the appropriate olive-green coloring. Black levels are all around pretty solid with minimal crush to create an image that maintains a strong sense of depth throughout.

With a DTS-HD MA 5.1 audio track, 'War Pigs' actually has a fine auditory presence - most of the time. When scenes are conversational or even during the action sequences, this audio track really shines. During the goofy training montages that is filled with a rousing score and campy dialogue, the track becomes a bit soupy. For the most part, dialogue is crisp and clean and easy to hear. Sound effects are present and help create a strong sense of dimensionality and atmosphere. It's really during the training sequence where the music largely takes over the track that the dialogue and sound effects tend to suffer some clarity issues. This isn't altogether terrible as you're not really missing much during some of these scenes, it is still a noticeable flaw

'War Pigs' feels like an 80s WWII action movie that has arrived thirty years too late to the party. It doesn't go anywhere we already haven't seen in other movies and what we do get with this one isn't all that interesting. If you're hard up for entertainment, I'll give it credit for being distracting enough. Cinedigm has brought 'War Pigs' to Blu-ray with a strong A/V presentation but no extra features. Since there really isn't anything here worth recommending, my suggestion is you skip it.

Sale Price 8.3
Buy Now
3rd Party 3.87
In Stock.
See what people are saying about this story or others
See Comments in Forum
Previous Next
Pre-Orders
Tomorrow's latest releases