How some movies get made and not others is one of the biggest mysteries of the movie industry. Sometimes it's a simple matter of budgetary math, a certain type of genre can virtually guarantee an investment return of a projected amount. Sometimes the script can be so good that it attracts too many heads who have too many ideas and the project stalls out to death. Then you have a movie like 'Pay the Ghost' starring Oscar winner Nicolas Cage. While it has a talented actor in the lead, the movie borrows so many parts from other better movies that it becomes difficult to figure why it was made.

For Mike Lawford (Nicolas Cage), his career is moving in the right direction. He's a popular horror literature professor at NYU and is busting his backside to get tenure. The problem with Mike's career ambitions is that he hasn't been the most present father to his young son Charlie (Jack Fulton) and he certainly hasn't been the most attentive husband to his pretty wife Kristen (Sarah Wayne Callies). While Mike may not have been the best patriarch as of late, the Lawford family is very understanding. So when Halloween rolls around and Mike misses Trick or Treating, Kristen is understanding and willing to let Mike take Charlie to a city carnival so the two can bond for the frightful holiday.

At first everything is going great. There are spooky costumes, stilt walkers, candy, bonfires, and some ghosts - real ones - but only Charlie can see them with his camcorder. As the night moves on, Mike can see that his son is upset but can't figure out why. Thinking ice cream is the solution, Mike and Charlie walk hand in hand to an ice cream truck, but the boy isn't calming down. After randomly asking his father "can we pay the ghost?" Charlie disappears. The boy was standing right beside Mike and in the blink of an eye he was gone.

A year later and things aren't any better. Mike searches endlessly for his missing son as the cops seem unable to dig up new leads, and Kristen has all but left her husband. When Mike learns that throughout the years that the children who disappear on Halloween never return, he's shocked to learn at the number of kids that have gone missing in New York on that particular night of the year. After hearing of a small Celtic township within the city that still celebrates the old-world Halloween festivities, Mike learns that a vengeful spirit known as a "Crone" has taken his son out of revenge for what was done to her and her children in the 17th century. Mike has but only a few precious hours to save his child's life by traveling to the underworld and rescuing him, or Charlie will be lost for all eternity to the Crone. 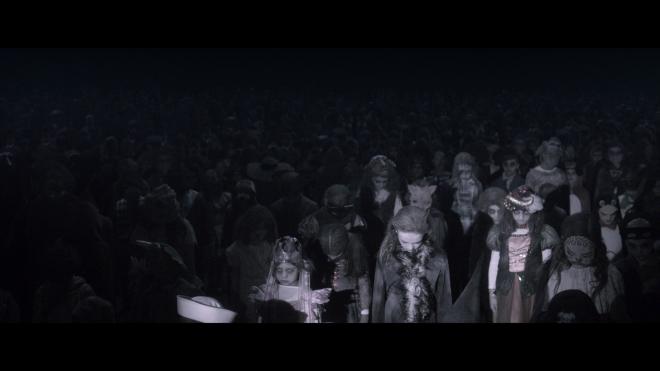 As one sits down to watch 'Pay the Ghost' it becomes painfully clear that this movie lacks any sort of originality in the arena of ghost and spook pictures. When you start noticing scenes that feel like they were photocopied from the scripts from other movies like 'The Exorcist,' 'Poltergeist II,' 'Darkness Falls,' and even bits of 'Drag Me to Hell' just to name a few, it's hard not to stop seeing the parallels to other better horror movies throughout the run of 'Pay the Ghost.' There just isn't anything new here to celebrate. When you start to notice the similarities to other movies it doesn't take long to figure out where this movie is going and how things are going to turn out. Even the film's mid-credits scene is a predictable last stab attempt to generate an authentic scare.

The real shame of 'Pay the Ghost' are the performances. Not that the actors in the film are terrible in their roles, just the opposite in fact. The actors are really giving their respective parts their all. Sarah Wayne Callies is delivering one of her better recent performances as a distraught and desperate woman who has lost her child. The few scenes we get to see of Jack Fulton as Charlie are strong examples of the kid's talent. Then you have the main man himself, Nicolas Cage. I know the phrase "Nicolas Cage stars in a movie…" has become a bit of a punchline of late, but the man isn't at fault for how this film turns out. In fact, Cage should be given heaps of praise for making this thing even watchable. There is so much talent in this movie that a lot of it gets wasted here.

'Pay the Ghost' may not be the worst ghost/possession/missing child/monster flick out there, but with the cast assembled, it's a shame that it relied so heavily on such cliched material. I can't quite say that 'Pay the Ghost' was a complete waste of time, but I can't quite bring myself to recommend it either. There are so many better movies I would suggest people watch before giving 'Pay the Ghost' a spin. Even then I would say there is probably a better movie than this one. 'Pay the Ghost' is just one of those unfortunate horror films that had a lot of potential to be a spooky little fright flick, but in the end just becomes another unremarkable horror movie.

'Pay the Ghost' arrives on Blu-ray thanks to Image Entertainment and is pressed on a Region A Locked BD25 disc. Housed in a standard case with identical slip cover, the disc opens to a couple trailers of previous Image Entertainment releases before reaching the main menu.

Featuring a strong 2.35:1 transfer, 'Pay the Ghost' looks frightfully good on Blu-ray. While the main movie itself may not have been amazing, the film's production design and creepy images work well to provide a sense of dread and this transfer captures everything perfectly. Set during the Halloween holiday, the film uses a lot of dark earth tones, heavy greens, browns, and deep oranges to convey the mood as well as season and the color reproduction looks fantastic on this Blu-ray. The image also has a solid sense of depth as black levels are rich and inky with strong shadow separation. Detail levels are on point for a recent film release as you can clearly make out every actor's fine facial features as well as costumes and the New York architecture. Where the transfer falters a bit is during the climax where a lot of CGI elements were employed. During a brief few scenes, the image becomes notably flatter and a lot of that pleasing detail is lost. Thankfully those moments pass quickly and don't really detract from the rest of the main feature.

Perhaps the best part of 'Pay the Ghost' was the film's creepy sound design. Presented here on this Blu-ray with an English DTS-HD MA 5.1 mix, the audio is a horror movie lover's delight. While most of the film keeps to the midranges, some smartly used lower register towns slip in and out of the film giving it a persistent sense of dread that kept my subwoofer working nicely. While the film does rely a bit heavily on the tried and true ghostly jump scares in places, those audio cues really get a kick from this mix providing a couple good jumps while also keeping the surround channels engaged. Dialogue comes through cleanly and is largely center/front channel focused allowing the film's wonderfully creepy score by 'The Evil Dead' series composer Joe LoDuca to have a nice and ominous presence. His score really is the highlight of the film and gives a lot of help to the sound design of the film. It may be a meager horror movie, but 'Pay the Ghost' has a heck of an audio mix to show off.

I like to give every movie a chance to win me over. I do my best to not prejudge a movie, but 'Pay the Ghost' just did not pay off for me. It's a film that borrows too much material from other movies to be any good on its own. It's a shame, because star Nicolas Cage and the rest of the cast are clearly working hard to make the most of this film. Image Entertainment brings 'Pay the Ghost' to Blu-ray, and the A/V presentation is practically perfect, but the lack of extras really hurts this disc's score. I've gotta say skip it. Some forgiving horror aficionados out there may find something worth liking within this one, but other than a score by Joe LoDuca, there isn't a lot worth seeing. You can skip this one.

Sale Price 9.95
List Price 29.97
Buy Now
3rd Party 2.45
In Stock.
See what people are saying about this story or others
See Comments in Forum
Previous Next
Pre-Orders
Tomorrow's latest releases