When a cafeteria food virus turns elementary school children into little killer savages, a group of misfit teachers must band together to escape the playground carnage. The film stars Elijah Wood, Rainn Wilson, and Alison Pill as teachers who fight to survive the most unruly students ever on the worst Monday of their lives!

Early on, the filmmakers of 'Cooties,' a delightfully twisted dark comedy co-written by Leigh Whannell of the 'Saw' and 'Insidious' franchise fame, address a serious concern plaguing the horror genre for the last two decades: those pesky cell phones, the ruin of many audiences' "suspension of disbelief." When trouble erupts on screen, be it the murderous threats of a masked maniac or a zombie epidemic that only seems to affect grade school children as is the case here, why don't characters simply whip out their trusty smartphones and call for help? While other, often less entertaining spooky flicks imagine ridiculously elaborate explanations for a device's failure, Whannell and a pair of directors, Jonathan Milott and Cary Murnion, making their debut take a more pragmatic and realistic approach. The teachers at Ft. Chicken Elementary are asked to relinquish their phones because it's only fair in the eyes of the kids when the school enforces a strict "No Phones" policy. In doing this, the cell phone issue is excused while also later revisited as a plot device for a brave rescue mission.

It's this type of wink-wink, tongue-in-cheek self-awareness humor that makes this low-budget production a hoot and an entertaining blast. Even when several of the gags completely fall flat — Elijah Wood as aspiring horror writer turned substitute teacher on his first day Clint Hadson forced to crawl out his Prius through the rear door — other jokes quickly swoop in to push them aside — the new age vice principal (Ian Brennan, who also takes co-writing credits) who uses air quotes to explain his teaching methods. The filmmakers also use the discussion of cell phones in our daily lives as an opportunity for some cracks of their effects on today's children, as evidenced by one particular boy Patriot (Cooper Roth), the school bully named so because he was born on September 11th and says his farewells to his mother with vulgarities. As one would suspect, many of the kids of this school are spoiled brats, and the teachers, bound by certain state regulations, are made to feel helpless when disciplining, which Wood's Clint quickly realizes only two minutes into class. 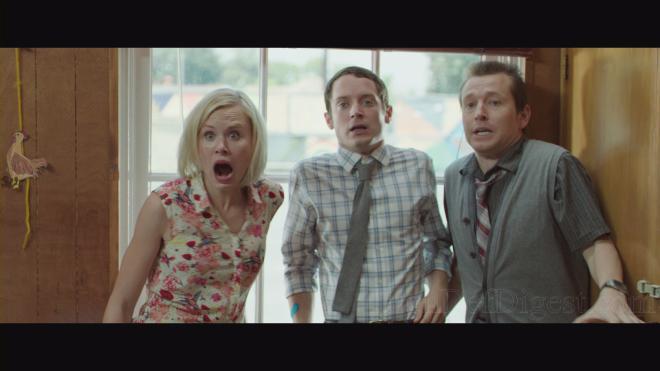 Clichés and stereotypical conventions are used with the sort of witty knowing intent that will either have viewers rolling their eyes or bursting out laughing at the silliness, and some are subtler and more satisfying than others, which is not surprising because too many of the pratfalls feel desperate and ultimately pointless, such as Jorge Garcia's 'shrooms-popping crossing guard Rick. The same goes for the beautiful Nasim Pedrad acting as nothing more than a prop and the punchline to trivially amusing jokes while Jack McBrayer's effeminate teacher spends his time high-pitched squealing and making us question his orientation as if it matters. As Clint's love interest, Allison Pill provides some drollness to a zombie pandemonium that traps teachers in the building they frantically want to escape from, both literally and figuratively. But it's Rainn Wilson who ultimately steals the show as the mustached PE teacher who can't pronounce "dual-wheel" correctly and delivers arguably the funniest improvised line of this pleasantly surprising horror comedy to a stunned Wood.

Along with Wood and Wilson's performances, Whannell also manages to surprise with several hilarious moments as the socially awkward and weirdly reserved Doug. His role is reminiscent of 1950s sci-fi horror features where the rational, calm scientist conveniently elucidates on the end of days mayhem using the crudest and rudimentary observations while also tasked with performing some of the most disgusting deeds for arriving at his conclusions. With excellent makeup and visual effects that effectively turn rude children into terrifying monsters, the makers of 'Cooties' clearly had fun behind the scenes, possibly letting loose some dark, deeply subconscious urges to discipline this generation of disturbingly unruly and ill-mannered rapscallions. If one is easily offended at the sight of kids being hit with baseball bats, hockey sticks and run over by trucks, then steer clear of this absurdly wacky and violently gory production, but for those with a darkly twisted sense of humor, the movie is guaranteed to appease such warped bloodthirsty appetites.

Lionsgate Home Entertainment brings 'Cooties' to Blu-ray on a Region A locked, BD50 disc housed inside a blue, eco-cutout case with a glossy slipcover and a code for an UltraViolet Digital Copy. At startup, the disc commences with a series of skippable trailers before switching to the standard menu screen with full-motion clips and music.

'Cooties' throws a murderous temper tantrum on Blu-ray with a highly detailed and first-rate 1080p/AVC MPEG-4 encode. Likely shot on HD cameras, the picture comes with a sterilized digital appearance that's usually unattractive, looking more like something made for television than cinemas.

Still, fine lines are razor sharp throughout and objects in the distance are very well defined thanks to a comfortably bright and balanced contrast. The overall video is steadily upbeat and glowing to match the movie's more comedic elements, and nighttime sequences continue providing excellent visibility of background information, even in the darkest shadows and corners of the 2.35:1 frame. Black levels are equally true and dark though not as consistent with a few slightly less than satisfying moments that tend to flatten an otherwise a three-dimensional presentation. There are also several instances of banding and visible steps in the gradation scale. They're not terribly intrusive, but they are there nonetheless. Primaries are luxurious and richly saturated, making the blood and gore really pop from the screen, and secondary hues appear accurate and cleanly rendered, allowing facial complexions plenty of warmth and natural textures that are revealing in close-ups.

The infected children spread their homicidal virus with even more frenzied violence on this surprisingly strong and continuously active DTS-HD Master Audio soundtrack. Technicians have done a marvelous job here, employing the surrounds on various occasions and filling the room with hilariously fun mayhem. When in the POV of the zombified pint-sized horde, their snarling, slobbering howls seem to come from all around, and in one scene, their sinister laughs from the first floor of the school creepily echo through the halls of the second floor. During outside scenes, leaves are clearly heard rustling in the distance, and the metallic pings and bumps of the ventilation ducts ring and travel all around.

In the front soundstage, imaging feels broad and expansive thanks to excellent channel separation and convincing off-screen effects that smoothly move into frame during several moments. Dynamic range is extensive, delivering room-penetrating clarity in the higher frequencies, even during the loudest, craziest segments. The low-end is shockingly powerful and even authoritative in a couple unexpected sequences that manage to dig deep into the ultra-low ranges, providing the music and action some hefty weight and presence (bass chart). Amid the chaos and pandemonium, character interactions and dialogue remain distinct and well-prioritized in the center.

With the type of wink-wink, tongue-in-cheek self-aware humor that will either repel some viewers or make them laugh out loud, 'Cooties' spread infectious laughter with the absurdly silly premise of zombified tots wreaking gory, violent mayhem. While not always consistently funny, the horror comedy starring Elijah Wood, Rainn Wilson and Alison Pill should more the satisfy the ravenous appetites of horror hounds everywhere. The Blu-ray arrives with very good picture quality and an even better audio presentation, and with a decent assortment of supplements, the overall package is worth a look for the curious.

Sale Price 14.99
List Price 19.99
Buy Now
3rd Party 14.98
In Stock.
See what people are saying about this story or others
See Comments in Forum
Previous Next
Pre-Orders
Tomorrow's latest releases