The American family is treated to more than they bargained for when they are psychically consumed by a summer home rental in 'Burnt Offerings.' Although the title hints at a story along the lines of witchcraft and demonic rituals, or perhaps a folk horror in the vein of 'The Wicker Man,' the movie is really more a supernatural mystery tale in the tradition of 'The Amityville Horror' and 'The Sentinel.' Sadly, it's not as effective at generating the level of scares let alone creeps as those classics.

Nevertheless, the 1976 adaptation of the 1973 novel of the same name by Robert Marasco endures as a cult favorite amongst fans of the subgenre and those who grew up on it via late-night TV showings or VHS rentals. And it's that very nostalgia that sometimes clouds one's judgment, both in a good way and bad. I still have memories of shivering beneath the blankets when the pale-faced hearse driver appears with a sinister, devilish smile, but that same scene now produces giggles. From a more objective standpoint, the movie barely registers the sort of chills that warrant its longevity, yet those fond childhood memories make it difficult to dismiss altogether, making it an oddly fun watch as the picture-perfect family falls apart.

The script, co-written by director Dan Curtis and author William F. Nolan ('Logan's Run,' 'Trilogy of Terror'), imagines a middle-class family looking to rent a home for the summer. But this is complete fantasy and escapism at its purest for moviegoers of the period since the plot is actually set at the height of an economic recession. After being told the price of renting a slightly run-down and worn-out neoclassical 19th-century mansion, the patriarch of the family, Ben (Oliver Reed), is shown as fiscally conservative when desiring to leave the premises and take a day or two to mull it over. The place, after all, is in need of much repair and extensive cleaning, and Ben is correct in suspecting a hidden scheme or trap because the deal is much too good to be true. It's Karen Black as the dutiful wife Marian who finally convinces him with an argument that consists of batting the eyes and a begging puppy-dog face. The original owners are the Allardyce siblings, Arnold and Roz (Burgess Meredith and Eileen Heckart adding some off-putting creepiness), and their highly unusual while also eccentrically eerie relationship plant the seed of ruin. 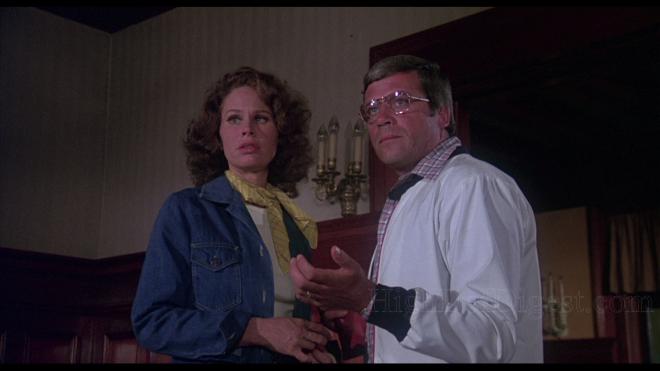 The film spends a good deal of time on the dynamics of a traditional marriage and acceptable domestic situations. It creates an interesting contrast of the two vastly different relationships with the siblings' closeness immediately serving as unnatural and somewhat unnerving. Ben and Marian's union is not exactly shown as perfect either, but they are the stereotypical white picket fence image of the modern marriage. However, it's not long until whatever domestic problems existed before the start of the story are brought to the surface. Some of these are curiously and uncomfortably related to Marian's stay-at-home duties, shown as cultural characteristics of a wife's quotation-mark obligations. The tension between them, ranging from a lack of intimacy and limited communication to feeling unproductive, extends to their son Davey (Lee H. Montgomery) and spunky Aunt Elizabeth (Bette Davis in a performance that exceeds anything required by the production). A game in the pool with Davey quickly gets out of hand, and the boy is nearly killed later in the story while Marian slowly grows hostile and spiteful of Elizabeth's presence.

Had the filmmakers continued exploring the inner troubles lurking beneath the idyll homestead, 'Burnt Offerings' would make for a fascinating, unique and more memorable genre piece. Sadly, Curtis and crew lapse into standard horror conventions and invoke the ghosts of tired tropes for paving a road leading to a final reveal that is nowhere nearly as shocking as the filmmakers believed it to be. There's a constant sense of pulling on the reigns the moment events seem a bit too perceptive — Marion's submissiveness is contradicted by minor displays of self-assuredness and independence. And Curtis refocuses attention on the usual bumps of the night and other unexplained occurrences, which are frankly embarrassing attempts at generating scares or a spooky atmosphere. This affects other seemingly important sequences, such as the persistent visions of the aforementioned hearse driver, which ultimately adds nothing of value or significance to the plot. A supernatural house that feeds on the anxieties of the stereotypical middle-class family is an appealing premise, but the execution is a melodrama better served for television audiences. Ironically, that's precisely how Curtis's film gained its current cult status.

Kino Lorber brings 'Burnt Offerings' to Blu-ray on a Region A locked, BD50 disc inside the standard blue keepcase. At startup, viewers are taken directly to a static main menu with music.

The eerie cult favorite makes a tribute to the Blu-ray gods with a strong 1080p/AVC MPEG-4 that shows the elements used are in rather excellent condition. Had the source received the full restoration treatment and a new master, the presentation would be quite lovely to enjoy.

But as it is, the high-def transfer displays good to average definition and resolution though the fine lines of hair, surrounding foliage and antique wood furniture are nicely detailed, and there is plenty of visible texture in the clothing and the faces of actors. Still, the best scenes are offset by several blurrier, poorly-resolved moments, and a majority of the film was photographed in soft focus, which at times, makes certain sequences rather difficult to properly gauge and evaluate. Contrast is stable and well-balanced with brilliant, clean whites everywhere while blacks levels remains true and sometimes inky rich, but shadow delineation is bit more on the average side with a couple less satisfying areas. Colors, unfortunately, are somewhat lackluster but largely accurate and well rendered, but occasionally, the palette falls flat, which noticeably affects flesh tones. White specks and bits of dirt make sporadic appearances, but overall, the 1.85:1 image is passable with an attractive, film-like layer of natural grain.

The slow burn of a supernatural thriller makes another offering with an equally strong yet ordinary DTS-HD MA mono soundtrack that won't impress modern viewers but gets the job done. Although largely restrained to the center, imaging exhibits a pleasing enough presence and clarity, the sort expected from a production of this caliber and period. The mid-range is decently dynamic and detailed with appreciable distinction in the higher frequencies, but the track rarely exerts itself. In spite of that, the presentation somewhat lacks character and mostly feels limited and uniform, as though restricted to the middle of the screen. Bass is fairly good and adequate, but nothing really worth noting although the few lower frequencies are generally reserved for Bob Cobert's ominous score. Dialogue reproduction is clean and well-prioritized, keeping the focus and attention on the conversations and troubled interactions.

In the vein of other similar horror flicks featuring a supernatural presence disturbing the peacefulness of the middle-class family, 'Burnt Offerings' unfortunately meanders about a variety of interesting possibilities and eventually settles on standard genre conventions. Starring an ensemble cast of talented stars, the movie continues to last as an amusing nostalgia piece with a couple amusingly unnerving moments but in the end, fails to really scare or satisfy. The Blu-ray arrives with a strong audio and video presentation that's definitely a step up over its DVD counterpart but doesn't quite live up to current HD expectations. With a very light collection of supplements, the overall package will only attract cult enthusiasts and collectors.

Sale Price 18.35
List Price 29.95
Buy Now
3rd Party 14.99
In Stock.
See what people are saying about this story or others
See Comments in Forum
Previous Next
Pre-Orders
Tomorrow's latest releases