In a peaceful New England town, the four lifelong friends who make up the Chowder Society come together each week to regale each other with tales of terror. But when one of the elderly gentlemen experiences a family tragedy, it becomes apparent that a buried secret from their youth has arisen to remind them of the sins of their past. Soon, they will learn they have never been forgiven… and a supernatural vengeance awaits them all. Craig Wasson, Patricia Neal, and Alice Krige also star in this chilling and atmospheric telling of one of horror’s greatest stories.

In 'Ghost Story,' four lifelong friends come together every weekend to drink and swap spooky tales of the paranormal until one day, a real-life tragedy is suspiciously believed to be the result of some unearthly presence. This may not sound like the sort of supernatural horror feature most audiences would immediately gravitate towards while even the most devoted of genre fans would likely overlook it as a quaint story about rural New England living. Who would immediately jump at the opportunity to hear tales from a quartet of old fogies sitting in a darkened room, smoking cigars and drinking brandy? Not many, I would venture. But that's precisely the appeal of this 1981 film from John Irvin, British filmmaker best known for his work on BBC's 1979 'Tinker Tailor Soldier Spy,' 'Raw Deal' and 'Hamburger Hill.' Based on Peter Straub's 1979 novel of the same name, the adaptation is told with an old-fashioned charm that savours and delights in a thickly sinister and grimly oppressive atmosphere. And in turn, that melancholic tone is a reflection of the four men who are haunted by a secret that pervades their nightmares.

The entire production is ultimately reminiscent of classic Hollywood where a feeling of dread and the macabre is more effective than jump scares. Granted, there are a few attempts at having viewers scream at the sight of a ghoulishly disfigured corpse, which are welcomed fun, but the emphasis is wholly on the four men essentially battling a feeling of an inhuman presence. Made during the height of the "slasher" craze, which dominated theater screens, the film can be all the more appreciated for its slower pace stressing a haunting mood over graphic violence and gore. Adding to that classic Hollywood feel, this largely forgotten horror gem also features performances by Fred Astaire, John Houseman, Douglas Fairbanks Jr and Melvyn Douglas. Though Mr. Astaire takes top billing as the cheery, high-spirited Ricky, all four men come with an earnestness and solemnity that provides every piece of dialogue with grave sincerity. We quickly take a liking to them but also feel a dark sense of remorse in their conversations, a touch of an apologetic tone when rationalizing the unexplained deaths surrounding them. 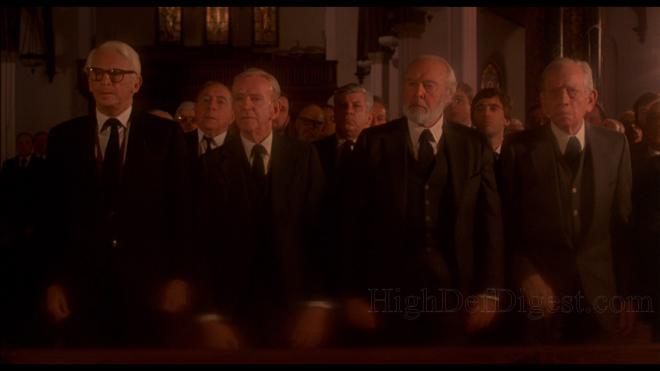 It doesn't take long — or much, for that matter — to uncover the secret the gentlemen have been harboring for the last five decades, which only now is resurfacing and threatening everything they've worked hard to accomplish in their lives. Figuring out what they did is really only a side note, a small part to a larger riddle. It's the journey in unraveling the mystery that's the real joy and enchanting spell that captivates in this well-crafted, old-fashioned chiller. The road for unearthing the truth is brought to light by the death of David (Craig Wasson), son of Fairbanks' Edward, and his brother Don (Wasson in a dual role) believing he was murdered when falling from the top floor of a highrise window. Rummaging through his father's old photos, Don discovers the first piece of the puzzle which connects their father's past to both brothers' unusual relationship with an eerily mysterious lover. Although the script by Lawrence D. Cohen ('Carrie') narrows Straub's dense novel to its bare basics, the proverbial theme of the son bearing the sins of the father remains intact with David's success ending in death and Don's life falling in ruin.

The woman at the center of the mystery is Alice Krige ('Star Trek: First Contact') in a memorable portrayal as the otherworldly Alma, which is Spanish for soul and can also be used as a metaphor for heart in some contexts. And Ms. Krige is indeed a phantasmal beauty with an angelic stare that's at once alluring as it is doomed and spooky. Her dark, round eyes are filled with an ill-fated sadness which further draw audiences into 'Ghost Story,' making her the pivotal personality that unifies the entire plot. The four men tell tales of horror, a tradition that started when their dark secret also solidified their lifelong friendship, as a means of dealing with their past. Interestingly, they are also a way of confronting their current fears of death and guilt. Don finds a way of relating with the men and coming another step closer to solving the mystery by sharing a scary story of his own, a spine-chilling yarn that's serves as the film's highlight. The whole thing hints at the idea of past sins haunting the present, though it was done much better in Straub's novel. Nevertheless, Irvin does an excellent job of translating the book to the silver screen with spine-tingling effectiveness and a gloomy atmosphere reminiscent of classic Hollywood.

Shout! Factory brings 'Ghost Story' to Blu-ray under the distributor's Scream Factory line. The Region A locked, BD50 disc is housed inside the normal blue case with reversible cover art. At startup, the disc goes to a static menu screen with music and the usual selection of options.

The ghosts of the past haunt the present with a nice looking and satisfying 1080p/AVC MPEG-4 encode. Although it shows its age in a few spots, the source used appears to be in great condition, displaying the occasional splattering of white flecks, a few bits of dirt here and there, and a couple dim vertical lines creep up. Fine lines in clothing and furniture are well-defined while objects in the background are plainly visible, and the faint details in the faces of the cast are nicely detailed. Of course, the transfer comes with its share of softness and blurriness, bringing the overall quality down a couple notches.

Presented in its original 1.85:1 aspect ratio, the image arrives with well-balanced contrast and clean, crisp whites. Black levels, on the whole, look good and generally accurate, but in a few areas, they seem faded and lackluster with some shadows looking pretty murky and obscuring some of the finer details. Although the overall palette favors secondary hues and brown earth tones, primaries are bright and accurate, and flesh tones appear healthy. Awash with a natural, thin layer of grain, providing the video with an attractive cinematic quality, the high-def presentation offers a welcomed upgrade over its DVD counterpart.

Ghost stories are shared and swapped amongst friends thanks to an attractive and pleasing DTS-HD MA mono soundtrack. With a great sense of presence and warmth, imaging is decently wide with lots of background activity and excellent dialogue reproduction. From the low rumbling of classic 1920s cars to the sounds of chirping crickets in the distance, various noises and sounds are distinct, keeping the whole affair engaging and lively. Best of all, the music of Philippe Sarde exhibits outstanding clarity and detailing in the orchestration thanks to a notable and fairly dynamic mid-range. Then again, the design doesn't really offer much in the upper frequencies, and the very few loud moments come off somewhat flat and wanting. However, an impressive low-end provides the lossless mix with appreciable weight and response.

Based on the novel of the same name by Peter Straub, 'Ghost Story' is a satisfyingly creepy tale about four lifelong friends harboring a deep, dark secret from their youth. From director John Irvin, the film makes for a fun, spooky yarn that emphasizes an eerie atmosphere over graphic gore and violence, reminiscent of classic Hollywood and starring four legends from the Golden Age of cinema. The Blu-ray arrives with a strong picture quality and a slightly better audio presentation, making it a great step up over its DVD counterpart. With a nice collection of supplements, the overall package is one for the cult collection. Worth a look.

Sale Price 17.99
List Price 29.99
Buy Now
3rd Party 16.92
In Stock.
See what people are saying about this story or others
See Comments in Forum
Previous Next
Pre-Orders
Tomorrow's latest releases