Overview - The movie series that taps into your deepest fears returns with a new and imaginative chapter that delivers the expected – in so many keep-you-guessing, unexpected ways! A strange premonition causes friends to abandon their day at the speedway, just before a crushing pileup hurtles cars into the bleachers with fiery consequences. They have cheated Death. But Death is only getting started. From the director of Snakes on a Plane comes the eerie, innovative tale of the friends’ fierce fight to keep themselves and others alive.
OVERALL
For Fans Only

Isn't it amazing how a single film can reshape a movie genre? 'The Ring' for instance, is the catalyst that started the whole Asian horror remake craze. The 2003 "reimagining" of 'The Texas Chainsaw Massacre' is responsible for jumpstarting Hollywood's recent obsession with classic horror rehashes. And during the mid-nineties, it was Wes Craven's 'Scream' that single-handedly revived the dying slasher subgenre with a much needed shot of adrenaline, kicking open the doors for a new wave of similarly polished clones like 'I Know What You Did Last Summer,' 'Urban Legend,' and perhaps the most innovative of the bunch, 'Final Destination.' What made this particular movie such a clever slasher was that it surgically removed the typical psychotic killer element and replaced it with the simple and ingenious concept -- you can't cheat death.

Kismet will get you every single time.

The downside to this premise, as brilliant as it may be, is that it unfortunately etches everything in stone, leaving very little wiggle room to take the stories in different directions. As a result, the plots of all the films in the 'Final Destination' franchise are stamped from the same template. The movies center on a main protagonist, a teenager or young adult, who suddenly is troubled by a premonition--enabling them to foresee themselves as one of many victims in a horrific catastrophe. The various disasters include the explosion of Flight 180 in the original film, followed by a massive freeway pile-up, and the derailment of an amusement park roller-coaster in the next two sequels. This time, in 'The Final Destination,' Nick O' Bannon (Bobby Campo) is the unlucky soul, haunted by the death and destruction caused by a nightmarish race car crash at McKinley Speedway. At first the visions in each of these episodes are tough to process, but as eerie signs indicate the experiences may be glimpses into the very near future, Nick and the others use this knowledge to escape tragedy and prevent their demises. Or so they think -- as it isn't very long before the survivors are struck with a grim reality check that fate always has a way of realigning its master plan.

Directed by David R. Ellis ('Snakes on a Plane') and written by Eric Bress ('The Butterfly Effect') who also worked together on 'Final Destination 2,' the sole purpose of 'The Final Destination' is to cash-in on the recent 3-D resurgence that has become all the rage. Just like 'Journey to the Center of the Earth' and the remake of 'My Bloody Valentine,' the film was developed specifically with 3-D in mind, so there are plenty of intentional in-your-face gags like runaway tires and popping champagne corks making a beeline straight for the camera. Ellis and Bress also seem to be aiming for a more lighthearted approach, even injecting a bit of tongue-in-cheek humor to give a little wink-wink nudge-nudge to the whole 3-D experience. While I don't think the end result worked out as well as they had intended, at least they deserve some credit for trying to take a fun route.

Ironically, this is also the main problem of 'The Final Destination,' as so much focus is devoted to the 3-D angle that the rest of the film suffers. The movie is a sleek eighty minutes, most likely to ensure the 3-D aspect doesn't wear out its welcome, but that in turn cuts down on any potential plot and character development. Not that these films had much of that anyway, but this script is so watered down (the worst of the entire series, in my opinion) and the characters are so bland and uninteresting that now it's blatantly obvious they really only exist to string together the elaborate kills. Plus it doesn't help matters that the bizarre accidents in this chapter are so over-the-top they come off much tackier than the ones in the previous films. Now I'm certainly not saying don't make them exciting, since after all, if Death went for the quick fix by having these people simply choke on a booger the movie would be pretty dull, however this seemed more like a desperate attempt to one-up the Jigsaw killer.

Despite my complaints, I still would be lying if I said I found 'The Final Destination' boring. The kill sequences may be excessively corny, but they're still moderately entertaining and the build-up leading up to them does generate some tension and suspense. I just think the movie in general could have been a lot less hollow, and although I missed its theatrical run I'm sure it was probably more enjoyable up on the big screen.

Warner Brothers brings both the 2-D and 3-D versions of 'The Final Destination' to high-definition on a dual-layered BD-50 Blu-ray Disc inside a regular blue keepcase. The package also includes two pairs of cardboard anaglyph (red/blue) 3-D glasses and a second disc containing a DVD/Digital Copy combo. It's worth noting that apparently the 3-D version is a limited release, and a 2-D only version (lacking the additional disc and one of the featurettes) also exists. My screener copy also came with a slick holographic 3-D slipcover. Before getting to the menu screen, there are forced trailers for 'Warner Brothers Blu-ray,' 'Warner Brothers Digital Copy,' and 'The Book of Eli.' Finally, the Blu-ray disc is reported to be region free and therefore should function properly in all PlayStation 3 and standalone machines. 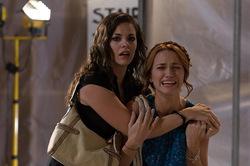 As mentioned previously, both the 2-D and anaglyph (red/blue) 3-D versions of 'The Final Destination' are included on this Blu-ray, and each utilizes a 1080p/VC-1 (2.40:1 aspect ratio) encode.

If you've seen any of the other films I mentioned in this review that were specifically created for 3-D, the 'The Final Destination' is along the same lines. There are numerous gags scattered throughout specifically designed to protrude from the screen and exploit the 3-D gimmick, and the image generally has a strong sense of faux-depth. As always with anaglyph technology, though, don't expect much color separation or fine detailing. Clarity also suffers dramatically, and the off-focus presentation does tend to be hard on the eyes after awhile.

The regular 2-D mode is vastly superior, at least on home video. The source is practically spotless and has a pleasing dimensional "pop." Bold and vivid colors are everywhere (the speedway sequence is particularly striking) and black levels are richly deep. There's an occasional slight softness to the picture at times, but fine detail remains intact and fleshtones stay nicely accurate. While there are instances of ringing and some touch-up work like edge enhancement, I didn't see any signs of artifacting or DNR. However, I did notice bouts of digital noise during the darker scenes, which may be the result of two film variants compressed onto a single-layered disc. Still in terms of visual appeal, 'The Final Destination' impresses far more than it disappoints. 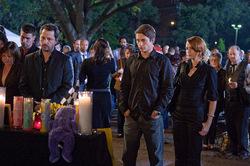 The Blu-ray of 'The Final Destination' comes with an English DTS-HD Master Audio 5.1 mix, and the sound design of this lossless track is the highlight of this disc.

First and foremost, the surround effects are fantastic. The entire speedway sequence spreads across all of the channels nicely, offering smooth pans and a great simulation of movement. Race cars "whoosh" by from one side of the listening area to the other and the room is filled with a potpourri of crowd ambience. The rear channels remain highly active during Nick's premonition scenes and most of the elaborate kills. The bass is kept busy as well, particularly among the score and the multitude of explosions. Rounding out the package is crisp, clean dialogue that is never drowned out by other sounds. 'The Final Destination' may not be the best of the franchise, but it definitely reigns supreme as far as audio goes.

The Blu-ray ports over a few items from the standard-definition DVD release: 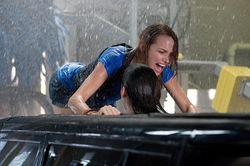 Hopefully 'The Final Destination' will be the final 'Final Destination.' As a fan of the original, I think there's just no where else for this franchise to go (even Tony Todd didn't bother with this installment, sadly). This Blu-ray does have strong video, superb audio, and a few worthwhile supplements, but unless you're a dedicated fan of the series, I'd classify this release as a rental at best.

Sale Price 9.97
Buy Now
3rd Party 10
In Stock.
See what people are saying about this story or others
See Comments in Forum
Previous Next
Pre-Orders
Tomorrow's latest releases