The Motels Live at the Whisky a Go Go 50th Anniversary

Martha Davis & The Motels - the iconic band that helped launch MTV in the 80's, with international hits including "Suddenly Last Summer," "Only the Lonely,"Mission of Mercy,", "Total Control" and so many more, is even more relevant in 2015. Golden Globe Nominee Rosanna Arquette and Grammy Nominee Linda Perry, introduce the band and it's legendary frontwoman Martha Davis for the 50th Anniversary of the equally iconic Sunset Strip music venue, The Whisky a Go Go. A fantastic tribute to this band's legendary live performances, filmed by multiple Emmy winning cinematographer, Roy H. Wagner, and directed by famed choreographer Denise Faye ("Burlesque" and Co-Director of Cher's "Dressed to Kill Tour").

As music tastes change and fluctuate with the times, the one constant that always amazes me are the venues. Sure they may get a new coat of paint, maybe get a renovation or two, but when you have a classic venue like The Whisky A Go Go - it's pretty amazing that 2014 ushered in its 50th year of operation. All of the greats to arrive on the Rock scene have played in this West Hollywood venue. Heck, The Doors were even their house band for a time! Then you have a group like Martha Davis and The Motels. Martha Davis and The Motels started out in the 70s and hit it big in the 80s right around the time that a little upstart cable TV channel called MTV was getting off the ground. So to see a rock 'n' roll icon playing in a venue like the Whisky, you can expect great things to happen.

Now normally I'm not a fan of recorded live shows. Part of the fun of going to a live show for me is knowing that seeing that particular performance is a unique experience. The band or the play you're seeing may be working off the same play list or songbook, but the experience of the show itself is singular. It can never be repeated the same way ever again live. Video recordings try to capture that magic, but for the most part, offer up diminished returns on investment. However, I will sometimes make an exception for a live performance of a band. While I do love to see a favorite group perform live in person, sometimes having that video recording can be a great way to kick in some fond memories. In my case, I've never seen Martha Davis and The Motels live, I just remember the tunes growing up when I was a kid. To be honest, a lot of the songs in this concert I didn't even know were done by The Motels, but I'd heard them numerous times in TV shows and movies so it was a real kick to see and hear them performed live. It's also cool to hear that Martha has that same gravely voice she's always had and she hasn't lost a beat. 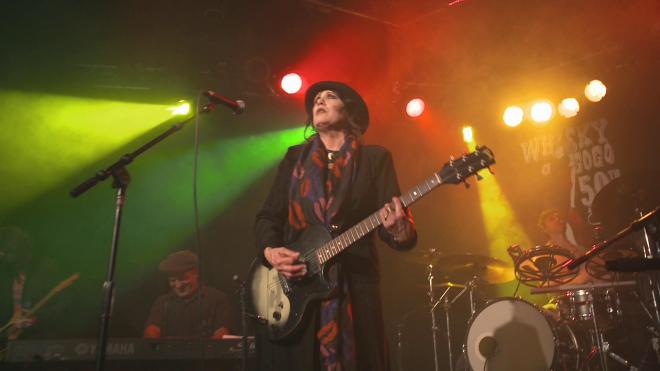 The playlist for this concert includes:

Where Do We Go From Here

Some of these songs I knew well and others were new experiences making this concert a great watch. Introduced by Rosanna Arquette and Linda Perry, the show is not only a celebration of The Whisky A Go Go but it's also Martha's birthday as well - although she wouldn't admit what year! The show is great from start to finish and Martha and her band clearly knows how to entertain a crowd. Part of the fun of hearing so many great familiar songs is that you can kinda just check out and listen. You don't exactly have to watch your screen if you don't want to when you've got such an awesome playlist to keep your auditory attention. All around this is a great way to spend 87 minutes. Whether you're a fan of the band and want to see a hell of a live show or if you just dig the tunes and want a solid listening experience while you're taking care of some day to day business, 'The Motels Live At The Whisky A Go GO' should get the job done.

'The Motels Live At The Whisky A Go Go' arrives on Blu-ray thanks to Amped and Vesuvio Entertainment and is pressed onto a BD25 disc. Housed in a standard case, the disc opens directly to the main menu. Also included is a booklet featuring photos and details about the crew at The Whisky and The Motels band members.

I've never been to a concert at The Whisky A Go Go, but it's one of those legendary venues that you hear about because of its tight quarters and intimate nature and this 1.78:1 1080p transfer captures that feeling. In terms of image quality, color, black levels, the overall range is a bit hit or miss. This is a very smokey venue with a lot of overhead colored lights so detail has a tendency to fluctuate in and out of focus. For a concert video, the digital photography does a heck of a job at keeping up with the show, but because of the venue's tight quarters, there isn't a lot of scope to it. The show is shot very close up or from the front balcony so anyone expecting something in tune to a Red Rocks viewing experience may be disheartened by the limited viewing angles. In terms of replicating the experience of seeing a show at The Whisky, I can only imagine this is pretty close to it. It's a venue that looks like the audience can easily reach out and touch the band, and this transfer, while not earth-shatteringly beautiful, does a solid job of replicating that effect.

'The Motels Live At The Whisky A Go Go' comes packed with a strong and resonate Dolby Digital 5.1 audio track. As far as concert videos go, this audio track does a pretty great job at capturing that live recording sound, but at the same time, it doesn't quite capture the essence of the venue. Part of the fun of a good live show is the audience reaction, and from what I can hear in my personal experience with this Blu-ray, it seems the audience wasn't miked. So, unless they get really loud, the audience is almost a non-element. To that end, this track is also very much a front stereo affair. The surround channels never really come to life in a way that makes you feel like you're a part of the show. It's still a good listen, but I wish this had been mastered in a TrueHD track or something that packs a little extra oomph to help you rattle your speakers. All around it's a solid track but I have a nagging feeling it could have been stronger.

Martha Davis Surprises Fan: (HD 1:48) This is a backstage moment a life-long fan of Martha gets to meet her favorite singer. It's actually a cool moment, even if it's very brief.

Round Table With Dean Chamberlan, Jeff Jourard, & Robert Newman: (HD 24:34) Former Motels band members sit together to talk about playing at The Whisky, playing in the band, and what it was like seeing Martha perform again. It's a pretty good interview and it's a lot of fun hearing about The Whisky in its heyday.

Theatrical Trailer: (HD 2:03) a Solid trailer that does a great job at letting you know what you're in for with this concert video.

When you have a band that has endured as long as Martha Davis and The Motels have playing in a legendary venue like The Whisky A Go Go, you've got something pretty great. While this Blu-ray may not be as good as actually being there, it makes a solid effort at replicating the experience with a strong A/V presentation. A couple good extras make this Blu-ray worth a look at the very least. Fans of Martha Davis and The Motels should absolutely consider this as a worthwhile purchase.