A pack of cigarettes, a video game, a pick-up truck and a stately colonial home all become key elements in four terrifying tales of terror in the anthology film, Nightmares, directed by Joseph Sargent (The Taking of Pelham One Two Three, White Lightning).

A chain-smoking homemaker (Cristina Raines, The Sentinel) insists on going out for cigarettes even when an escaped madman is on the loose in "Terror in Topanga."

J.J. Cooney (Emilio Estevez, Young Guns), a video game hot-shot, dares to take on a strange challenger – though it may cost him his life – in "The Bishop of Battle."

A troubled priest (Lance Henriksen, Aliens) seeks to find the faith he has lost on the road, but instead he finds someone (or something) in this desert is trying to drive him out of his mind in "The Benediction."

Claire (Veronica Cartwright, Alien) hears rats in the walls. Her husband (Richard Masur, The Thing) believes he can take care of the problem with a few rat traps, but this problem is only going to get much bigger in "Night of the Rat."

It's funny the memories we attach to certain movies from our childhood, often turning the bad into good and selectively remembering only key moments that formulate into a positive experience. 1983's horror anthology 'Nightmares' is one such flick from my youth I always remembered as better and scarier than it actually is, made so by its stronger aspects and more memorable highlights, small fragments reassembled in a way that play out differently than the movie itself. The first time I watched it was on a VHS rental during summer recess by myself with the lights in the living room turned off. I laid on my stomach, staring at the 24-inch screen -- which at the time was considered big -- with wide-eyed anticipation because I was a fan of 'Creepshow' and 'The Twilight Zone Movie,' along with the 'Night Gallery' television series. I don't recall being thoroughly scared or terrified by the movie, but I remember being spooked and impressed by the visuals. Revisiting the movie today, it fails miserably to get a rise out of me, yet the special effects remain impressive for the period.

Of course, that's not to say they are consistently good or particularly striking, but considering some of the limitations at the time, the visuals and practical effects are nonetheless noteworthy. The first of four stories starring Cristina Raines ('Nashville,' 'The Sentinel') doesn't require the use of movie illusions as it's a relatively straightforward tale of a mother discovering an unwanted hitchhiker hiding in the back seat of her station wagon. Inspired by a well-known urban legend that amazingly persists to this day, the story is frankly a wasted opportunity on the part of director Joseph Sargent for properly setting the tone. Well, in a way, he does set the tone for the rest of the movie, but not in a good way or as he would have hoped. Instead of being remotely thrilling, audiences are made to spend time with an annoying woman prioritizing her cigarette addiction over safety, ignoring the endless warnings of an escaped mental patient on a killing spree. The piece is ultimately memorable for the cameo appearances of William Sanderson and Lee Ving of LA-based punk band Fear. 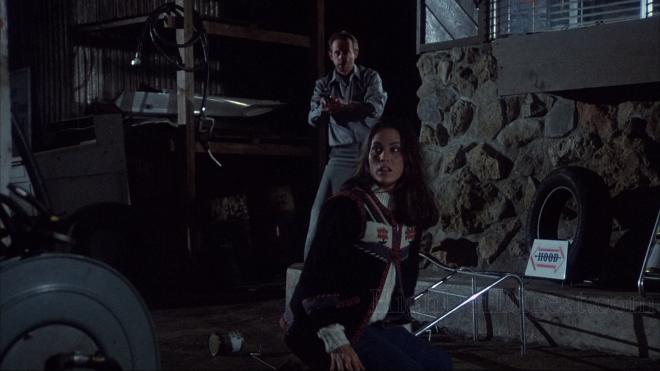 Even worse, the filmmakers decided to bookend the anthology with arguably the weakest story that coincidentally also features the shoddiest special effects work of all. A suburban family is terrorized by an overgrown rat of Germanic legend, as explained by Albert Hague playing an exterminator who conveniently happens to be an amateur folklorist. And like the first story, this one comes with another pair of infuriatingly dumb characters: a rudely prideful jerk of a husband (Richard Masur) and his exasperatingly submissive wife (Veronica Cartwright). The tale finishes with a predictable showdown that employs laughably cheap looking composites of a normal black rat that ruin any chance of inducing scares. Going back to what I remember of the movie, it's funny that I completely forgot about both of these stories, especially this dreadfully bad conclusion. Or, maybe it's a good thing since they would have made me steer clear of the whole thing and I would have missed out on enjoying the two best tales of the whole lot: "The Benediction" and "The Bishop of Battle."

Since that fateful summer night, I've been haunted by vague recollections of a black Chevrolet 4x4 pickup intimidating Lance Henriksen on a lonely desert highway. The plot is a simple tale of Henriksen's priest losing his faith and confronted by the seemingly demonic truck, eventually beaten by the dumbest of reasons, but it standouts due to surprisingly good practical effects and stunts, namely the moment when the vehicle shockingly jumps from beneath the ground. However, my fondest memory of 'Nightmares,' without a doubt, is the story of a teenage video game addict (Emilio Estevez) whose reward for defeating a challenging arcade game offers the most satisfying twist.  The early CGI work still holds up thirty-some years later, but the most memorable aspect for me is the awesome selection of punk rock songs, notably some oddly fitting Fear tunes when Estevez is in the zone.

While the other two tales in this anthology failed to make much of an impression, the middle two are the cause for this reasonably budgeted production to live on in the dreams of cult collectors.

Shout! Factory brings 'Nightmares' to Blu-ray under the distributor's Scream Factory line. The Region A locked, BD50 disc is housed inside the normal blue case. At startup, viewers are first given the choice between the film's original 1.85:1 aspect ratio or an alternate 1.33:1 ratio solely for those fans feeling a bit nostalgic for classic television before switching to a static menu with music.

The cult horror anthology invades the nightmares of Blu-ray with a clean and fairly attractive 1080p/AVC MPEG-4 encode, showing strong definition and resolution throughout. Although not the sharpest and looking generally blurrier than other releases from the same period, fine lines in the clothing and hair are nicely detailed while objects in the background are plainly visible, and facial complexions are often revealing in several scenes. With a very thin layer of natural grain showering the 1.85:1 image, the presentation comes with an appreciable cinematic quality that makes its softer aspects more tolerable.

Contrast and brightness are well balanced, allowing for good visibility in the distance, and while blacks are dark and accurate, they are not always consistent with shadows often coming off a bit too strong and with a tendency to engulf the finer details. Colors are nicely saturated and can be pretty bright in several moments, and skin tones are natural. Though the video shows its age with the occasional white speck and dirt, the elements used appear to be in great condition and the movie would surely benefit from a full restoration.

Like the video, the audio comes with its share of positives and negatives, but for the most part, it makes for an entertaining listen and complement to the movie.

Starting with the negatives, the DTS-HD MA monaural soundtrack largely feels narrow and restricted to the center. Although a few atmospherics in the background provide the movie with a discernable sense of presence, much of the activity sounds uniform and somewhat confined, almost as if the design wasn't given enough room to breathe. Dynamic range seems somewhat affected by this, which is most apparent during the movie's loudest segments. In general, the track is clean and distinct, but higher frequencies are not as crisp, action scenes are noticeably bright and a hissing noise can be heard on occasion. On the positive side, when not pushed too hard, the lossless mix delivers good vocals, adequate separation in the mids and palpable low bass.

Best remembered for a pair of quirky tales starring Emilio Estevez and Lance Henriksen, the horror anthology 'Nightmares' sadly hasn't aged well, except for serving as an amusing nostalgia piece. The Blu-ray from Scream Factory arrives with an adequate audio and video presentation that should satisfy fans who remember watching the movie as a kid. Lacking any noteworthy supplements, the overall package does offer the unique opportunity of watching the 1983 movie in a 1.33:1 aspect ratio that'll feed some viewers' nostalgia, making this worth a look for cult enthusiasts.