Your favorite grime bandits come to life with all the farts, snot and vomit you can take in this hilarious film full of "gross-out humor" (The New York Times). Based on the wildly popular and irreverent trading cards, 'The Garbage Pail Kids Movie' stars Mackenzie Astin ('Iron Will', 'Wyatt Earp') as a perfectly nice teenager who discovers the Kids...to his great disgust! When Dodger (Astin) accidentally releases the Kids from their magical trash can prison, all smell breaks loose. Despite their offensive personal habits – and attitude problems – Dodger soon becomes fond of the Kids. But when Messy Tessie, Foul Phil, Valerie Vomit and the whole misfit crew join his fight against thuggish bullies, their efforts just might land them behind bars at the State Home for the Ugly! This grossly entertaining cult classic features great makeup effects by John Carl Buechler ('Troll,' 'Dolls,' 'Ghoulies') and co-stars Phil Fondacaro ('Troll,' 'Ghoulies II'), Katie Barberi ('Ferris Bueller's Day Off') and singer/songwriter Anthony Newley ('Doctor Dolittle').

'The Garbage Pail Kids Movie' is on a level of awfulness all its own. Ranking as one of the worst movies ever made, there are quite literally no words for describing how laughably bad this utterly misguided production truly is. It requires — nay, demands — of its audience a certain type of love for bad movies in order to find some minuscule sparkle of entertainment, a tiny twinkle of hope concealed deep beneath a gigantic, steaming, putrid, gut-wrenching mountain of crap. The live-action adaptation of the once immensely popular trading cards of the same name doesn't even compare to other movies. Of course, 'The Apple,' 'Troll 2' and 'Howard the Duck' arguably come close since the latter two also feature a cast of little people in costume while the former is simply bad on a bloated grand scale. And there are hundreds more bad movies to possibly compare, but, in their defense, those head-shaking messes, at least, provide some unintentional laughs to enjoy.

Here, on the other hand, moviegoers are challenged to polish a bona fide turd oozing with gross-out gags that raise more eyebrows than induce the tiniest of smirks. The Rod Amateau picture follows a bizarre plot that's all over the place, touching on a variety of themes without much focus or even hinting at a specified end goal. We're made to believe the main protagonist is a 14-year-old boy named Dodger (Mackenzie Astin), which is a rather odd name to begin with, who is continuously threatened — quite violently, I might add — by local bully in nice threads Juice (Ron MacLachlan) who looks old enough to be his dad. Dodger finds refuge in an antique shop owned by even older sophisticated gentleman Captain Manzini (Anthony Newley), who apparently never thinks it necessary to call the authorities or involve the parents but simply brushes it off. All the while, the kid apparently has googly eyes for Juice's girlfriend Tangerine (future Telenovela star Katie Barberi).

Almost as if existing in a parallel universe vaguely similar to our own, the story never comments or, at least, clues viewers to how Dodger and Manzini know each other or how the kid came to be under the man's care. What the heck is up with everyone's names? How does Manzini know magic and why is he constantly making ambiguous remarks about finding the proper ingredients for casting dark spells? On the surface, we have what suggests a coming-of-age tale about confronting one's tormentors and self-discovery, and that aspect of the story comes to a predictable conclusion. On the flip side, we also have a cautionary coming-of-age tale about first loves, especially the sort where the boy discovers . . . the seductive prowess of a woman's evil charms to get her way? Nestled within this split of the central theme, Manzini's role is never made clear, spending his time doing who knows what rather assisting Dodger with some antiquated, clichéd guidance. 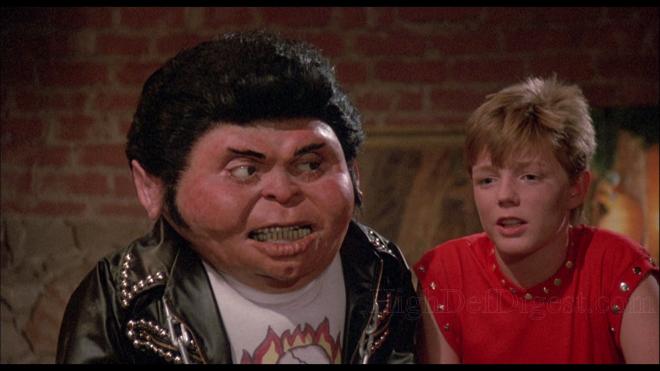 Perhaps, we're not really meant to ponder on such inconsequential points, which are honestly treating like trivial afterthoughts by the filmmakers themselves. After all, this is a movie inspired by collectible trading cards where most of the attention rightly goes to a gang of abnormal looking kids with disgustingly vile habits and weird physical aberrations. But even here, more questions arise starting with the mysterious garbage pail from which they break free. Do the gross children come from space as implied by the opening credit sequence, or did Captain Manzini accidentally conjure them up in some freak magic accident? For those who collected these cards in their youth, Nat Nerd and Greaser Greg are exactly as one would have imagined them, but Foul Phil and Messy Tessie are complete duds without a shred of humor while Windy Winston is one fart joke too many and Valerie Vomit makes fans wait until the end to show off her gross trademark. But most concerning is Ali Gator's compulsive eating habits and an apparent drinking problem. At the same time, Amateau, who cowrote the script with Melinda Palmer, turns the kids into talented clothes designers just for the sake of making some extended sweat shop crack with a godawful musical number?

As mentioned, 'The Garbage Pail Kids Movie' is an oddball mess of awfulness that will leave viewers scratching their heads of the intended target audience when it's riddled with somewhat questionable jokes, inappropriate sexual references, and a bizarre plot that's all over the place. And yet, ever since I first saw it in theaters one hot summer weekend — being a very loyal fan of the trading cards, of course — I keep finding myself gravitating towards it, haunted by the visuals of the bizarre creatures brought to life by movie magic. I've unashamedly owned it on various home video formats, revisiting the perplexingly lowbrow schlock at least once every other year for laughs. Outside of nostalgia and a fervent love for bad movies, I'm not sure what it is exactly I find entertaining about it because it is an objectively terrible piece of filmmaking. Ironically, it seems like a rather perfectly fitting approach to a plot about finding the beauty in the ugly, even if having to dig through a large vat of repulsively nauseating sewage only to discover a tiny speck of charm. Going on almost thirty years now and I'm still swimming, looking for that speck, and I've amazingly grown accustomed to the dreadful stench.

Shout! Factory stinks up Blu-ray with a Collector's Edition of 'The Garbage Pail Kids Movie' under the distributor's Scream Factory line. The Region A locked, BD50 disc is housed inside the normal blue case with brand new reversible cover art and a cardboard slipcover. At startup, the disc goes to a static menu screen, the usual options along the bottom and music playing in the background.

Surprisingly, the repugnant, obnoxious kids are a sight for sore eyes thanks to a shockingly good-looking 1080p/AVC MPEG-4 encode, offering a massive upgrade over the two previous DVD releases. The source used has aged very well and appears to be in great condition, displaying better than expected clarity and resolution. White specks and dirt make sporadic appearances, but for the most part, the picture is clean and consistent with a very thin layer of grain, giving the 1.85:1 image an appreciable film-like appeal.

Though there are a couple moments of mild hot spots here and there, overall contrast is comfortably bright, allowing for some great visibility in the distance. Fine lines and objects are nicely detailed and fairly sharp for a majority of the runtime. The very few moments of softness are easily forgiven when the hair, clothing and facial complexions can be this revealing. Viewers can clearly make out every gross pimple, tiny wrinkle and leathery texture of the garbage pail kids. Brightness levels are equally pleasing and accurate, providing the presentation a bit of depth. However, there are several times when blacks come off a tad too strong with shadows engulfed some of the finer details and noticeably weakening resolution. Still, it's not enough to run away screaming because a richly saturated color palette more than makes up for the weaker aspects, giving the presentation an animated, mettlesome feel that loyal cult fans will appreciate.

Breaking free of their oozing garbage can, the repulsively ugly children offend the ears with an equally satisfying DTS-HD Master Audio mono soundtrack.

With it being confined to the center of the screen, there isn't much to say about the track, mostly due to a design that offers little in terms of a broad and active presentation. Nevertheless, there's quite a bit worth appreciation as the lossless mix appears clean and free of any distractions like pops, noise and hissing. Although it largely feels narrow and limited, the soundstage comes with a nice and enjoyable sense of presence that delivers plenty of clarity of the minor background activity. There isn't a whole lot of movement, but the mid-range remains stable with good discrete details in the music and several moments of action. Low-frequency effects surprisingly provide some appreciable weight in several areas, especially the silly songs. Dialogue, particularly in the high-pitched, nasally voices of the garbage pail kids, is intelligible and well-prioritized throughout, making this low-budget stinker more entertaining than it has any right to.

Ranking as one of the worst movies ever made, 'The Garbage Pail Kids Movie' is on a level of awfulness all its own, yet the head-scratching schlock has garnered a devoted cult following. Outside of nostalgia and a fervent love for bad movies, it's difficult to pinpoint its enduring appeal and lasting fascination, but fans like myself keep coming back to it for some mysterious reason. The Blu-ray from Scream Factory arrives with a surprisingly good audio and video presentation that will surely have fans scrambling for the nearest garbage pail. With a nice assortment of supplements, cult enthusiasts should be honored to have this stinky pile of a hot mess in their collection.

Sale Price 86.99
Buy Now
3rd Party 59.99
In Stock.
See what people are saying about this story or others
See Comments in Forum
Previous Next
Pre-Orders
Tomorrow's latest releases