The peaceful tranquility of a small Western town is disturbed when a murderous car wreaks havoc by viciously mowing down innocent victims. The new sheriff, Wade Parent (James Brolin), may be the only one who can stop this menace in its tracks.  But what Wade Parent doesn't realize is that the driver of this indestructible vehicle is far more dangerous than any man... because it is driven by pure evil.

When a studio catches lightning in a bottle once, it's not unheard of for them to try for a second shot at a similar story. Sony had a hit on their hands with 1992's 'Bram Stoker's Dracula' so their quickly funded follow-up 1994's 'Mary Shelly's Frankenstein' wasn't much of a surprise. Back in 1975 Universal had a massive hit on their hands that ushered in the era of the summer movie, the Stephen Spielberg classic 'Jaws.' Wanting to capture the magic again, they wanted to have 'Jaws' but on land - and to do that they put their backing behind 1977's 'The Car' directed by Elliot Silverstein and starring James Brolin and Ronny Cox. It may be a rough around the edges 'Jaws' cash-in, but the film offers up a terrific sense of suspense and proves to be a great source of B-Movie fun.

Santa Ynez was a sleepy sort of desert community where everyone knew each other and the worst crime wave to hit the town was an unpaid speeding ticket. Everything was normal for Sheriff's deputy Wade Parent (James Brolin), he had two young daughters he was raising on his own and was dating their young and attractive teacher Lauren (Kathleen Lloyd). Today was supposed to be like any other day, lazily chase down speeders and hand out necessary parking tickets and maybe take his family out to dinner - that all changed when a mysterious matte black car drove two bicyclists off the road, ran over a hitchhiker, and then disappeared into the dust.

The only witness to the murder of the hitchhiker was a rough and gruff man by the name of Amos (R.G. Armstrong) who has a long history with Sheriff Everett (John Marley). Everett isn't too inclined to believe the ramblings of a drunk who beats up his wife, but Wade sees the terror in the man's eyes - what Amos saw actually happened. With roadblocks set up all around the county, Wade, Everett, and the rest of the small squad of sheriff's deputies including the recently fallen off the wagon Luke (Ronny Cox) hope that the mysterious black car has moved on and will become someone else's problem.

When Sheriff Everett is run over by the vehicle, Santa Ynez's nightmare is just about to begin. With Wade as the new Sheriff, everything the small band of deputies does to stop the vehicle fails. When the vehicle chases down a parade practice filled with little kids and their teachers, it's as though the car has a mind of its own. Who is driving the car - or is there a driver? Could this black demon on four wheels be pure evil incarnate? 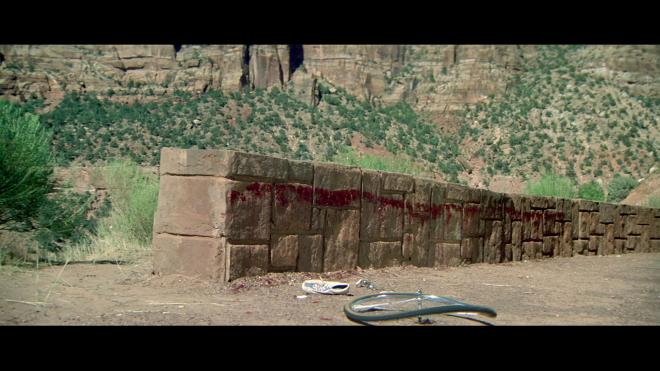 When you break it all down, yes, 'The Car' is in fact 'Jaws' on land. A mysterious entity, a force of evil terrorizes a small town until there is no other choice left but to fight the monster head on. While it may be a 'Jaws' knock off, 'The Car' still manages to drive on its own wheels. Director Elliot Silverstein smartly uses a number of tension hooks and methods to build suspense and the film delivers. A smart sense of humor in the first act of the film works to deflate any notions of camp or unintentional hilarity the moment the source of the humor is run over by a chrome bumper.

'The Car' is one of those horror movies that works if you give yourself over to it. Under those conditions, you should have a great time with it. If you're someone who gets hung up on needing to know who or what is driving the car, this is probably not the movie to spend the effort on. it's enough knowing that the car in question is a force of evil. How it gets to and from point A and B is a redundant issue. It's like asking why do the sharks from 'Jaws' and its sequels keep finding the Brody family all over the world? It's enough knowing that there is an evil, not knowing where it comes from or its motive makes it all the more chilling.

Holding a lot of the film together is star James Brolin as Deputy Wade Parent. Brolin channels a lot of the intensity and energy that he'd put to great effect for 'The Amityville Horror' in this film - only with a bit more believable restraint. He's a man who is afraid of the evil that is driving around his town, but he' not afraid to do something about it. Also turning in a welcome performance is Ronny Cox as the troubled Deputy Luke. He carries a lot of the same emotional overload that he brought to his role as Drew in 1972's 'Deliverance.' He's a man who embodies fear and terror and if he hopes to survive, he has to face it. Also welcome in this film is Kathleen Lloyd as Lauren. She brings a spunky sort of fearlessness to her part - to say more about her arc would be a bit of a spoiler, but she's great throughout. Add in appearances from the always awesome R.G. Armstrong and John Marley, with Eddie Little Sky, Kate Murtagh, and John Rubinstein and you have a cast that provide a welcome level of commitment to a project that had it cast lesser actors would have become overly silly and forgotten all these years later.

Far from being a truly terrifying movie, 'The Car' proves to be a tension-filled thrill ride that lets up on the gas just enough so you can catch your breath before it puts the pedal to the metal all over again. While it may not be the greatest movie out there, 'The Car' is endlessly entertaining. From the elaborate deaths to the impressive stunt work on display, anyone watching this movie with a love for fun should have a great time with this 70s B-Movie terror flick.

'The Car' arrives on Blu-ray thanks to Scream Factory and is pressed onto a Region A locked BD50 disc. Housed in a standard Blu-ray case, the disc opens directly to the film's animated main menu.

For a low budget film made nearly 40 years ago, I wasn't expecting much from 'The Car,' but I must say that the 2.35:1 1080p image is a pleasing surprise. Fine film grain has been retained providing a wonderful amount of clarity to the image. Audiences will be able to see and appreciate facial features, makeup and costumes, as well as the film's desert vistas. Colors are rich and vibrant with the right amount of primary pop allowing blues and greens to really stand out against the golden-brown desert. Reds can appear a bit pink in places, but flesh tones are naturally tan looking given the sunny scenery. Daylight shots are where this film appears at its best. Night shots can be a bit problematic as film grain can appear a bit on the noisy side of things and some contrast issues keep blacks from ever being truly inky and there are a couple of moments of crush. There also appears to have been some slight edge enhancement employed as the image can look a bit crunchy in some places and some slight banding pops up from time to time. These problems aren't terrible, but they're noteworthy just the same. For a low-budget production, it's hard to complain about the image quality when it's very clear that this film looks better on Blu-ray than it has on any other home video format. Especially when you consider that the print used for this transfer is in immaculate shape with little if any speckling or any other damage artifacts to report.

With a full DTS-HD MA 2.0 track, 'The Car' delivers a lot of auditory presence. Part of what makes this film work so well is its use of sound and music to build suspense and tension. When the film is at it's creepiest, there is almost no sound to be heard at all except for some slight ambient and background effects that fill the sides nicely. The rest of the film is fairly front/center loaded, but the mix of music, sound effects and dialogue don't clash in a detracting way at all. Dialogue is crystal clear throughout and never a problem to understand what is being said. Imaging is impressive as there is a lot of clear and notable channel movement, namely whenever the car zooms across the screen. There is also a wonderfully creepy trailing off effect as the car blasts its horn after a kill and leaves the scene. Levels are set pretty evenly and the track keeps to the midranges letting the cool score by Leonard Rosenman pump up the lower registers giving the film the right dissonant tones to keep the creepy vibes working. The audio doesn't suffer from any age-related anomalies making it a clean and clear listen.

Interview with Director Elliot Silverstein: (HD 9:16) This is a pretty informative interview, if a bit sad at times. Silverstein seems to have the need to apologize for his work or how an effect turned out because it wasn't as refined as it could have been with a bigger budget or digital effects. It's still a solid interview, but I hope he realizes that why the film works is because it has rough edges and the amazing stunt work wasn't done digitally.

Interview with Geraldine Keams: (HD 12:10) Geraldine Keams provides a lot of insight into the production while also detailing her casting in 'The Outlaw Josey Wales' and then working on this film that features a number of Native American characters.

Theatrical Trailer: (HD 2:15) A solid trailer that sells the movie well, the kitschy narration is what brings it home. Gotta love the oversell.

Radio Spots: (3:09) Radio spots are always entertaining and these hinge on a number of the simpler, dramatic dialogue moments to sell the film.

Still Gallery: A collection of stills, promotional pictures, and behind the scenes set pics.

'The Car' may not be the greatest thriller out there, but it is one heck of a wild and fun ride. it's best if you check your brain at the door and just go with it. This is a simple plot told well and the film is never boring or a drag. Scream Factory has done a heck of a job bringing 'The Car' to Blu-ray with a strong image transfer and a rock solid audio track and a smattering of decent extras. If you're a lover of B-Movie horror pictures, you should consider this Blu-ray release of 'The Car' recommended.

Sale Price 15.99
Buy Now
3rd Party 14.95
In Stock.
See what people are saying about this story or others
See Comments in Forum
Previous Next
Pre-Orders
Tomorrow's latest releases