Overview - Alex's journey from amoral punk to brainwashed proper citizen forms the dynamic arc of Stanley Kubrick's future-shock vision of Anthony Burgess' novel. Unforgettable images startling musical counterpoints, the fascinating language used by Alex and his pals - Kubrick shapes them into a shattering whole. Hugely controversial when first released, A Clockwork Orange won the New York Film Critics Best Picture and Director honors and earned four Academy Award® nominations, including best picture. The power of its art is such that it still entices, shocks and holds us in its grasp.
OVERALL
Rent it First

To call Stanley Kubrick's 'A Clockwork Orange' controversial would be an understatement. When it was originally released in 1971, its graphic depictions of sex and violence caused an uproar both stateside and abroad. The film was heavily protested, received the most restrictive ratings available (including an X-rating in the US), and was ultimately blamed for a series of copycat crimes that occured in the UK. Kubrick even barred his film from UK distribution after he began to receive death threats (the film was not officially banned by the British courts as has been frequently reported). Through it all, perhaps the most shocking thing about the film is that it still manages to offend and disturb viewers thirty-five years later.

The film itself is set in a neutered, futuristic London that's plagued by roving street gangs. Alex DeLarge (Malcolm McDowell) is a teenage boy obsessed with rape, ultra-violence, and Beethoven. He also leads a particularly savage band of droogs who love nothing more than to follow their mad leader into trouble, whether it be assault, robbery, or murder. When two of his thugs decide they're tired of Alex's brand of tyranny, they knock him unconscious at the scene of a vicious crime. Arrested and sent to prison, Alex is offered freedom if he participates in a painful form of experimental aversion therapy. As his mind is normalized by the government, Alex is forced to question his nature, his morality, and his desires.

It took Kubrick eight months to complete filming of 'A Clockwork Orange' -- quite an accomplishment for a notoriously obsessive director who had a reputation for torturing his actors with dozens of takes. In fact, 'A Clockwork Orange' the fastest production Kubrick ever set his hands to, arguably contributing to the film's rapid-fire insanity that serves as an appropriate match with thematic intensity of Anthony Burgess's original novel.

Although opinions on the film itself vary wildly, I've always found 'A Clockwork Orange' to be a future-dystopian masterpiece. Yes it's incredibly dark and twisted, yes it depicts some of the most vile acts ever set to film, and yes it does have questionable messages tucked beneath its surface. But at the same time it brilliantly explores the depths of human darkness and our instinctual love of violence. I'm personally convinced that viewers aren't disturbed by the nudity and bizarre imagery in 'A Clockwork Orange' -- instead, they're bothered by the authenticity of what they're watching. I find my stomach turning at the sheer joy the droogs take in ultraviolence, not at the ultraviolence itself. Kubrick uses extreme imagery with precision and in doing so forces us to question our own beliefs and virtues. In a sense, he shows us the very things we don't want to see in ourselves.

The second half of the film (Alex's "rehabilitation") has received the harshest criticism over the years, and admittedly Kubrick risks glorifying Alex's actions by transforming him from a monster into a victim. But if you look closer, the director is in fact questioning society itself. Are we willing to degrade our own decency to combat the monsters in our midst? Are we willing to exact revenge to achieve justice? Are we willing to rape the mind of a rapist? Regardless of how you answer those questions, the fact that Kubrick challenges viewers to consider the debate elevates 'A Clockwork Orange' to a level that transcends the its sci-fi/future dystopian trappings to become something much more universal and relevant.

Philosophy aside, it's impossible to deny Kubrick's talent at the peak of his career. He pulls deep performances from his actors and sets them against uniquely unsettling cinematography. Say what you will about his stories or thematic interests, but Kubrick was an amazing filmmaker, and he played every trump card he had in 'A Clockwork Orange.' Even people who can't stand the cynical tone of the film or its disturbing imagery should at least be able to appreciate the art of it all.

'A Clockwork Orange' is a dense and demanding examination of humanity's darkest desires. I can't guarantee you'll enjoy the film as much as I do, but here's betting that it will engage your intellect and leave you thinking about a variety of heavy subjects for weeks to come. 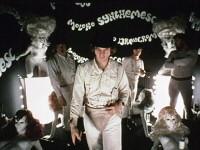 'A Clockwork Orange' makes its high definition debut with identical 1080p/VC-1 transfers on Blu-ray and HD DVD. This release also marks the first time the film has been available in the US in its original 1.66:1 ratio. But while this HD DVD offers a mild upgrade from the concurrently-released 2-disc Special Edition DVD, the image quality isn't nearly as striking as the remastered HD DVD releases of 'The Shining' or '2001: A Space Odyssey.'

First the good. Color saturation receives a decent boost overall and Kubrick's mishmash palette is nice and vibrant for an older film. Primary hues look healthy and blood has a tangibly visceral impact. I'm happy to report black levels are deep, contrast is impressive, and fine detail looks a bit sharper than it does on the newly released DVD.

Alas, all is not rosey here. Close-ups are generally improved, but more distant shots struggle to retain their clarity. There are even a few bizarre shots that drift completely out of focus (despite the fact that the same shots appear to be much crisper on previous DVD releases). The overall image is softer than I've come to expect from high definition catalog releases and I even found scenes that merely matched the quality of an upscaled DVD presentation. With that being said, I recognize that a portion of the softness present in the transfer appears in every release of the film and is a product of the age of the original print.

More disappointing is the amount of digital noise and artifacting evident throughout 'A Clockwork Orange.' While the film is naturally grainy, this high-def transfer reveals technical inadequacies on a regular basis. Blockiness and crushing are frequent problems (issues that certainly weren't Kubrick's intent), and I noticed arbitrary pixelation and banding as well.

In the end, I was disheartened to see Kubrick's bleak masterpiece wasn't enhanced very much by its move to high definition. If this is the best 'A Clockwork Orange' can possibly look in 1080p, than allow me to shed a justifiable tear. 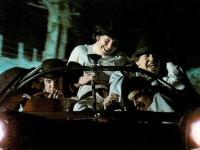 The video may be disappointing, but at least the audio package redeems things a bit. This Blu-ray edition of 'A Clockwork Orange' features a solid uncompressed PCM 5.1 surround track (48 kHz/24-Bit/6.9 Mbps) and an equally impressive Dolby Digital 5.1 mix (640 kbps).

The music receives the most noticeable improvement over earlier DVD versions of the film, with the synthesized Beethoven symphonies dancing across the soundfield with a renewed stability and confidence. I even felt low-end subtleties in the music that I hadn't noticed before. Dialogue is clear and well prioritized, sound effects are clean, and dynamics are respectable for a thirty-five year old film. I didn't notice any distracting problems with the original elements of the recording, and overall these tracks sound quite good.

Having said all that, I should warn that like the majority of older tracks remixed for surround sound, the rear channels in 'A Clockwork Orange' seem to be more of a novelty here than they are a genuine element of the soundfield. As such, for the most part, the soundscape in 'A Clockwork Orange' has the decidedly shallow resonance of a '70s film, and doesn't compare well with more aggressive catalog releases on the market.

Still, this is a fine overall audio effort and I appreciate the care that went into this audio package. It's the best audio presentation of 'A Clockwork Orange' I've heard -- just don't expect an awful lot of oomph from this one. 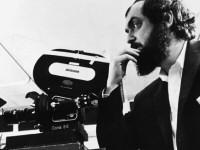 Wow. Although previous DVD editions of 'A Clockwork Orange' have been starved for extras, this Blu-ray edition comes jam-packed, porting over all of the new content from the currently-released 2-disc Special Edition DVD.


(Note that both the film itself and the supplements are included on a single BD-50 disc for this Blu-ray edition of 'A Clockwork Orange,' while the HD DVD edition splits the film and the video supplements across two HD-30 discs. The content on both releases is identical.) 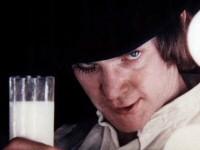 'A Clockwork Orange' is a stunning piece of cinema that remains controversial even thirty-five years after its original release. Sadly, this new Blu-ray edition is something of a mixed bag. Although it boasts a strong audio package and an onslaught of top notch supplements, unfortunately the video transfer is problematic, failing to offer a significant upgrade over the concurrently-released standard-def DVD. Although I personally think the good overwhelms the bad, you may want to give this one a rent before making a purchase decision.

Sale Price 18.56
Buy Now
3rd Party 18.87
In Stock.
See what people are saying about this story or others
See Comments in Forum
Previous Next
Pre-Orders
Tomorrow's latest releases