Speedy was the last silent feature to star Harold Lloyd—and one of his very best. The slapstick legend reprises his "Glasses Character," this time as a good-natured but scatterbrained New Yorker who can’t keep a job. He finally finds his true calling when he becomes determined to help save the city’s last horse-drawn trolley, which is operated by his sweetheart’s crusty grandfather. From its joyous visit to Coney Island to its incredible Babe Ruth cameo to its hair-raising climactic stunts on the city’s streets, Speedy is an out-of-control love letter to New York that will have you grinning from ear to ear.

In the realm of silent movie comedians, most people believe Charlie Chaplin ruled the roost. That might be true from an artistic standpoint, but as far as popularity was concerned, the undisputed king was Harold Lloyd. Best known as the bespectacled crazy man desperately hanging from the hands of a clock high above a bustling metropolis in the appropriately titled 'Safety Last!', Lloyd personified the affable American everyman, and audiences embraced his warmth, energy, optimism, and madcap humor. In the late 1920s, he was the country's top box office attraction, and his final silent film, 'Speedy,' proved to be one of his biggest successes.

Little more than a string of gags complementing a wispy plot, 'Speedy' is noteowrthy not only for Lloyd's indefatigable ebullience and boundless creativity, but also for its extensive location shooting in New York City. No film studio of the day would have dared tackle the logistical and technical issues - let alone put up with the massive expense - of making a movie in Manhattan and its environs, but Lloyd's personal production company jumped at the challenge, which would ultimately bring a rare authenticity to 'Speedy' and provide a priceless photographic document of a living, breathing New York in the halcyon days before the Great Depression. Though director Ted Wilde did shoot about half the film in Hollywood (one of the disc's special features details what scenes were filmed where), there's enough Big Apple flavor to tickle any history buff's fancy. Hollywood always did a fair job of recreating New York, as evidenced here, but there's no substitute for the real thing.

'Speedy' follows the adventures of Harold "Speedy" Swift (Lloyd), a normal guy whose obsession with baseball (especially his beloved Yankees) keeps him from holding down a job. When we first meet him, he's a soda jerk, but when that gig doesn't pan out, he finds work as a New York cab driver. He's also in love with his pert, pretty girlfriend, Jane Dillon (Ann Christy), and hopes to marry her. But before Jane can commit, she wants to make sure her grandfather's affairs are in order. Pop Dillon (Bert Woodruff) runs the last horse-drawn streetcar in New York City, and the burgeoning trolley syndicate has its eye on his route, which it needs to complete a critical merger. The syndicate only offers Pop a pittance to sell, but Speedy convinces him to hold out for a better deal, which inspires the bitter corporate bigwigs to employ nefarious means to quash Pop's business. In true Frank Capra fashion, little guy Speedy - with help from some of Pop's old cronies - tries to combat the big, bad establishment and help Pop come out on top.

Both Lloyd and New York share the spotlight, and each brilliantly plays off the other. The Coney Island sequence is the film's undisputed highlight, as Speedy and Jane experience many of the amusement park  rides and sample the iconic carnival cuisine, all while interacting with an array of colorful characters who make fine foils for Lloyd's impeccably choreographed schtick. In one memorable (and somewhat shocking) moment, Speedy clowns in front of a distorting funhouse mirror and all of a sudden playfully gives himself the finger. It happens in the blink of an eye, but it's clear as day, wonderfully spontaneous, and probably the first and only time that gesture found its way onto the screen before the 1970s. The scenes in the subway are equally hilarious (although they were shot in a studio), and the climactic chase through the Manhattan streets is both breathless and thrilling.

Another major league element of 'Speedy' is the extensive cameo by baseball legend Babe Ruth, whom Speedy takes on a wild taxi ride that rivals Disneyland's famous attraction devoted to Mr. Toad. In his last feature film appearance before playing himself in the famous Lou Gehrig biopic 'The Pride of the Yankees' in 1942, Ruth asserts himself well, and his substantial aura adds a touch of wonder to this working class tale. Ruth shot the film during the baseball season (even clocking a homerun for the cameras during a game), and the location shooting at the old Yankee Stadium will surely bring back memories for countless diehard fans.

'Speedy' is infectious fun - a bright, brisk joyride of a movie that showcases Lloyd to perfection. There's no message, no drama, just amusing tomfoolery oozing with charm and seasoned with a soupçon of heart. Those who love New York and baseball will get a special kick out of this vintage silent film, as will those who appreciate great comedy in its purest form. Lloyd was one of the masters, and 'Speedy' shows us why. 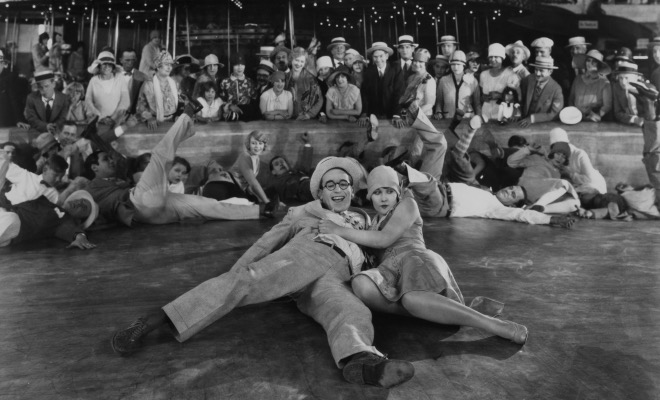 'Speedy' arrives on Blu-ray packaged in a standard Criterion case. A 12-page fold-out booklet featuring an interesting essay by author Phillip Lopate, cast and crew listings, transfer notes, and several black-and-white photos is tucked inside the front cover. Video codec is 1080p/AVC MPEG-4 and audio is LPCM stereo. Once the disc is inserted into the player, the static menu with music immediately pops up; no previews or promos precede it.

According to the liner notes, "this new digital transfer was created in 4K resolution...from a safety fine-grain master positive deposited at the UCLA Film & Television Archive by the Harold Lloyd estate." (Certain insert segments were also scanned in 4K from the archive's preservation negative.) The image is suprisingly clear and vibrant, and sports a pleasing grain structure that replicates the look and feel of celluloid. Some scenes are a bit softer and exhibit more texture than others, but superior contrast and a nicely varied gray scale maintain the picture's high quality. Sharp close-ups and good shadow delineation add more luster, as does the absence of major print defects. No digital enhancements or imperfections mar the presentation, which is quite impressive for an almost 90-year-old film.

'Speedy' features a marvelous contemporary music score by Carl Davis, and Criterion's LPCM stereo track beautifully renders it. Excellent fidelity, a rich depth of tone, and palpable stereo separation help the instrumentals fill the room, and the isolated audio effects that punctuate the action are crisp and potent. The result is a surprisingly vivacious and immersive silent film with a distinctly modern feel.

Like its title, 'Speedy' is a fast-paced, rollicking comedy, and its winning characters, sweet nature, and glimpses of 1920s New York City make it a charming diversion, even if you're not particularly fond of silent films. Harold Lloyd gives this gag-filled tale all he's got, and Criterion honors his efforts with a spiffy Blu-ray release featuring excellent restored video, a vibrant modern soundtrack, and plenty of extras. Add a rare cameo by the legendary Babe Ruth, and you've got a vintage screwball farce worthy of a recommendation.

Sale Price 19.99
List Price 39.95
Buy Now
3rd Party 15
In Stock.
See what people are saying about this story or others
See Comments in Forum
Previous Next
Pre-Orders
Tomorrow's latest releases