Mannequin Two: On The Move

A romantic confection, Mannequin Two On The Move is a comic look at reincarnation, lost love and fabulous window displays. This sequel to the popular Mannequin finds the outrageous Hollywood Montrose (Meshach Taylor, TV's Designing Women) promoted to Prince & Company's display department. Joining Hollywood on the job is new assistant, Jason Williamson (William Ragsdale, Fright Night) who in a past life was the prince of the Hauptmann-Koenig kingdom.

"True love is like the Loch Ness Monster, everyone has heard of it but no one has seen it."

Some movies should never have gotten sequels. Granted it's the unwritten rule that if a film does well that there is a 90% chance of an unneeded and unwanted sequel. History is riddled with these instances where a movie that was a modest success managed to earn a second dip to the well. Sometimes things turn out well enough and the second outing is actually worth watching. Other times, most times, in fact, the second movie can be so bad that it should be erased from all memory. 'Mannequin Two On The Move' is just that sort of sequel, a film that is so bad, it's only worth watching because it is so painful.

One thousand years ago, the fair maiden Jessie (Kristy Swanson) and the dashing heir to the kingdom of Hauptmann-Koenig, Prince William (William Ragsdale) are in love. But since Jessie is a commoner the mean Queen (Cynthia Harris) uses her evil Sorcerer (Terry Kiser) to transform the young girl into a mannequin cursing Jessie and William's young love for 1000 years. Time apparently heals all wounds as that 1000 years zips by with a simple film edit.

In 1991 Philadelphia, the Jessie mannequin is on tour as an attraction throughout the United States and her first stop just so happens to be Prince & Company were a reincarnated Jason Williamson (again William Ragsdale) has just started working as an assistant to the wildly quippy and eccentric Hollywood Montrose (Meshach Taylor) as a mannequin dresser. When Jason accidentally brings the Jessie Mannequin briefly back to life, their star-crossed love is able to rekindle, even if Jessie has a hard time understanding her new surroundings. Unfortunately for the two lovers, the descendant to the evil Sorcerer Count Spretzie (again Terry Kiser) has his own dastardly designs in place to keep Jessie and Jason apart for all eternity!

Yes, 'Mannequin Two On The Move' is that bad of a movie. From the first moment to the last, the film is a comedic lead balloon as joke fall with a resounding thud. The first film had a simple silly premise that didn't require much in the way of setup in order to woo an audience's attention and just be a piece of fun escapism entertainment. This sequel, on the other hand, is painfully desperate to find an excuse for its very existence. From the plot setup to the through line of reincarnation, the film constantly feels like it's looking at the audience pointing and saying "See! See what we did there? Aren't we clever? You should be laughing because we're so clever!" Only this film really isn't clever at all, in fact if you reverse the setup and have a future person travel back in time, you virtually have the same movie as Roger Corman's 'The Undead' only without Digger Smolkin and his charming songs. 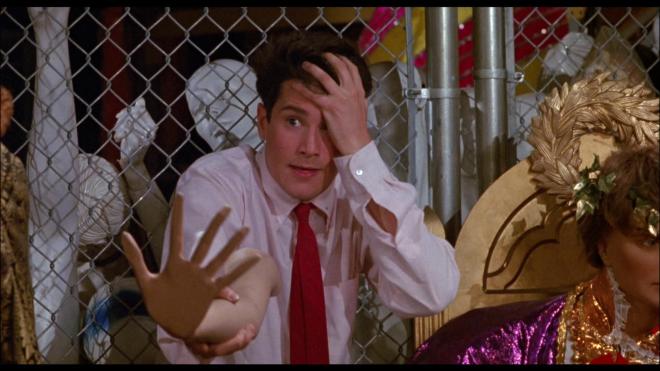 For a piece of personal history, 'Mannequin' was a movie that I grew up watching as a kid. It was a good bit of innocent fun that I could enjoy and genuinely had a great time watching. Then all of a sudden in 1991, I started seeing trailers and TV spots for 'Mannequin Two On The Move' and got a little excited because at 9 years old I didn't know any better. Then the movie hit theaters and the reviews came out. This was the first movie that made me aware that film reviews even existed. I was learning to read and I devoured the scathing review because it had a funny little turkey image instead of a series of stars hanging over the review. The film was savaged so viscerally I never saw the movie until years later when it was on late at night on cable. All these years later and the film has just aged terribly.

I'll give Meshach Taylor some credit for at least trying to bring this dud to life. He's the only actor that looks like he's having a good time let alone trying to make something interesting happen on screen. To that end, it's also rather sad because he's stuck doing most of the heavy comedic lifting as Hollywood Montrose. Hollywood in the first 'Mannequin' was a nice side character that was reliable for a quick quip and would disappear for several minutes until it was time for him to deliver another zinger. Here, he's on screen for nearly the film's entirety and it's a tough act to get into. Some of his jokes land and I admit to having a couple laughs, but since he's not even remotely close to being the main character, you just start to pity the man and the amount of effort he gave this thing. I wish there was something to say about William Ragsdale and Kristy Swanson, but they have absolutely no chemistry. At least Ragsdale had the role of Gary Hawkins on 'Justified' to look forward to! And the less said about poor Terry Kiser the better, but I will say he plays a more convincing dead guy than an evil sorcerer.

If you're at all interested in watching 'Mannequin Two On The Move,' I think you should first ask yourself how well you were able to get through 'Son of the Mask,' or 'Caddyshack II.' If you were able to make it through those and find a laugh to enjoy, you might make it through this one. If you can't even make it to the point where Jackie Mason shows up in 'Caddyshack II' then it's probably a good idea that you skip this one. It's a comedic anchor that manages to drown a lot of good talent in the process.

'Mannequin Two On The Move' arrives on Blu-ray thanks to Olive Films and is pressed on a BD25 disc. The disc is housed in a standard case and opens directly to the main menu.

While the entertainment quality of 'Mannequin Two On The Move' may be questionable, the film does have a colorful 1.85:1 1080p transfer working for it. With only modest speckling being the only print damage to speak of, the rest of the film is in great shape. Film grain has been retained so the image maintains pleasing and cinematic detail levels that allow you to appreciate the cheap medieval sets to the garish early 1990s costuming. Colors are bright and vibrant and primaries have plenty of pop. Flesh tones are pretty solid for the most part, but there are a few scenes where it looks like reds got pushed a tad so some actors can look a little unnaturally pinkish. Black levels are strong leading to a nice three-dimensional image presence. It's not the most amazing transfer ever, but it gets the job done.

'Mannequin Two On The Move' also enjoys a solid and serviceable DTS-HD MA 2.0 audio track working for it. Where this track is hampered, I feel, is from the inherent quality of the original sound mix. This is a movie where it feels like a lot of the dialogue was added in post, especially a number of Meshach Taylor's one liners, so there is a hollow flatness present throughout the film. However, the natural dialogue comes through crystal clear and the genuine sound effects have a strong presence to them. The film's score by composer David McHugh gets a lot of space to play without being intrusive of the other audio elements. Imaging isn't very dynamic as there just isn't much in the way of perceptible channel movement. The track keeps to the midranges and is well balanced so you shouldn't have to accommodate any sudden volume shifts.

As a fan of the original 'Mannequin,' 'Mannequin Two On The Move' is a dead dog of a sequel. It's an 80s movie made way too late to fit a mold that audiences had already broken away from. Watch at your own risk. The Blu-ray from Olive Films isn't half bad, featuring a strong transfer and a decent audio track. Without any extras to speak of, and due to the overall lack of cinematic quality, this is for the fans only. A blind buy is a dangerous proposition, so if you've never seen this movie, rent first.