Having developed a formula, that when applied to clothing renders a person invisible, an evil genius calling himself "The Phantom Ruler" is bent on creating an army of "invisible" soldiers in his efforts to rule the planet. Cloaked in invisibility, "The Phantom Ruler" is able to steal money and materials to move forward with his plans of domination. In steps investigator Lane Carson (Richard Webb, Out of the Past), who's out to foil those plans. With the assistance of detective Carol Richards (Aline Towne, Send Me No Flowers) they are soon hot on the heels of the would-be dictator and his henchman. With action and adventure at every turn, The Invisible Monster offers 12 heart-pounding chapters that include Slaves of the Phantom, High Voltage Danger and Death's Highway.

As much as I like to believe that I would have been a better child of the 70s than the 80s, I also have to admit that I'd be a great kid in the 1950s. On top of all the great science fiction adventure films and fantasy flicks like 'The 7th Voyage of Sinbad,' the late 1940s and 1950s also had some of the best serials ever produced. Before that new fangled invention The Television took over episodic science fiction adventures, the movie serial was a great way to keep an audience coming back for more space-age atomic powered fun. Republic Pictures was one of the best/worst offenders of the serial adventure featuring evil villains with super powers and a hero who somehow always manages to survive last week's explosive cliffhanger. 1950's 'The Invisible Monster' starring Richard Webb and Aline Towne may not be a great movie, but it is a near-perfect serial adventure!

You can't go for very long without some maniac using the good deeds of science and turning them into a weapon of evil! The Phantom Ruler (Stanley Price) has taken a new ray as well as a special form of fabric and now has the ability to turn himself invisible! With grand designs of creating an army of invisible warriors, The Phantom Ruler is going to need a hell of a lot of investment capital. But since he's evil, he's not very likely to get a small business startup loan from a bank - so he's going to have to break into their vault and rip off the cash himself. To do that, he needs help. By importing the best scientific minds in the world illegally, he forces these men to work for him or risk going back to their country of origin when all they want to do is become good upstanding American citizens.

Thankfully for these scientists, as well as the rest of the world, dashing Detective Lane Carson (Richard Webb) is on the case. With a little help from the intrepid, brilliant, and beautiful reporter Carol Richards (Aline Towne) Lane shouldn't have too much trouble locking down these mysterious robberies that have been happening all over town. Unfortunately for Lane and Carol, they can't see who they're fighting! As each clue points them towards solving the case, they encounter more death defying obstacles. Will Lane Carson stop the devilish Phantom Ruler? Will Carol be crushed by a gigantic vault door? Will the two be able to leap out of an exploding car in the nick of time? Find out next week - or plug in the Blu-ray and marathon all of the fantastic fun!

'The Invisible Monster' is a bit of a misnomer for a title. While The Phantom Ruler is most certainly invisible - provided a big spotlight is shining on him - he's hardly a monster. The Republic Serials of old are a fairly cookie cutter bit of entertainment. The villain's use of some form of atomic energy or other current scientific trope to concoct an overly elaborate plan for world domination. Then a good looking average Joe comes along followed by his vastly more intelligent female companion to save the day. While the woman is almost always smarter than the hero, she still manages to fall for every trap forcing our hero into the precarious position of having to save her or put the bad guys in jail. He can't do both so he always saves the girl - only you don't find out about that until the next chapter! With plenty of breakaway chairs and furniture, fist fights are fast and furious and rarely advance the plot any. Rinse, wash, repeat for 12 episodes and you have your basic Republic Serial. From 'Batman and Robin' to 'The Undersea Kingdom' to 'Radar Men From The Moon' - the formula is applied to every single episode. 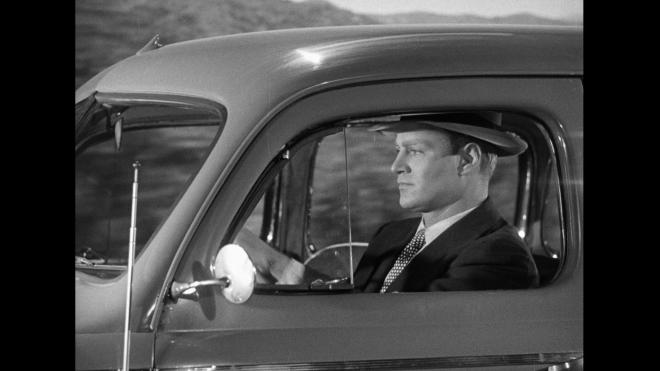 While 'The Invisible Monster' may not be unique even in the slightest sense of the word, it is a great bit of entertainment. Whenever that big gigantic spotlight turns on and traces a path for The Phantom Ruler to walk so he remains invisible, a big grin would just stitch across my face. Of course, the obvious thing for the police or our dimwitted hero with a chiseled jaw would be to shoot the darn light being controlled by a henchman in a truck - but that never happens. Instead, the good guys stand around dumbfounded at how the dastardly bad guys were able to get away. Sure some of these serials can get a bit tiresome since each episode is essentially the same, they're still a ton of fun.

When you think that so few of these serials survived in their entirety, they become imperfect diamonds in the rough. They're not good dramas, they don't setup suspense very well, and they can start to feel a bit tedious if you watch too many in a row - but they're endlessly entertaining. When you watch an old serial you can see how they worked as the prototype for so many television programs. The television writing structure was already being used before TV sets were in every home in America. It may not be the greatest serial ever, but I loved every minute of 'The Invisible Monster' and I am extremely happy that it has made its way to Blu-ray and am now hopeful that other great serials will make the transition to HD soon.

'The Invisible Monster' arrives on Blu-ray thanks to Olive Films and all twelve episodes are pressed onto a single BD50 disc. The disc is housed in a standard case and opens directly to a static main menu where you can choose to watch an individual episode or marathon the entire adventure.

For a 70-year-old serial, 'The Invisible Monster' enjoys a fine 1.37:1 1080p transfer. The print source for this transfer features some notable scratches and nicks, with some slight speckling, but considering so many of these serials were burned after their run, it's a bit of a miracle that this one even exists at all, let alone in the relatively impressive condition that it's in. Film grain has been retained and there are some notable detail improvements in HD. Some scenes are rather soft, but even then you can take note of the actors facial features, the costuming, and in a couple of instances, where the chairs had been cut before they're broken over someone's head! The black and white grey scale is pretty solid with blacks looking nice and inky and plenty of shadow separation. There are some instances of crush during the darker scenes, but they're relatively slight offenses. Contrast seems relatively under control considering the age of the thing, each episode maintains a nice three-dimensional feel to it.

'The Invisible Monster' gets a nice audio upgrade with a pleasing DTS-HD MA 2.0 track. Dialogue is crisp and clean and easily heard throughout. Sound effects and Stanley Wilson's score are lively and come through with a little extra oomph. Thankfully the track is also free of any age-related issues. Levels are well balanced as the show can change gears on a dime. A scene can open very quietly and conversationally and then WHAM! the fight starts, fake chairs are breaking everywhere, guns have that heightened howitzer cannon blast to them, and the rousing music kicks in to up the excitement levels. When an episode is about to come to a close, some of these elements can lose their luster as the final credits tune is about to roll over, but overall everything comes through just fine. This is actually an impressive mix when you consider the age as well as the low budget nature of the source material.

'The Invisible Monster' is just great fun, end of story. Like most if not all other Republic Serials, it follows a tried and true episodic structure that's extremely predictable, but never boring or loses the viewer's interest. I wouldn't suggest you marathon these, they can become tedious if you do that. However, if you have young kids and you want to show them something entertaining, 'The Invisible Monster' should fit the bill nicely. Olive Films has done a pretty great job bringing the complete serial to Blu-ray offering a fine A/V presentation. Even without any extra features, I'm still calling this one recommended.

Sale Price 16.18
List Price 29.95
Buy Now
3rd Party 16.18
In Stock.
See what people are saying about this story or others
See Comments in Forum
Previous Next
Pre-Orders
Tomorrow's latest releases